Well I, for one, scoff at Everlane bros who have pigeonholed themselves into one particular box by wearing their favorite brand of snoozy men’s basics. I mean, what kind of guy wants to look so utterly safe, anyways? Hold on, my girlfriend’s texting me: 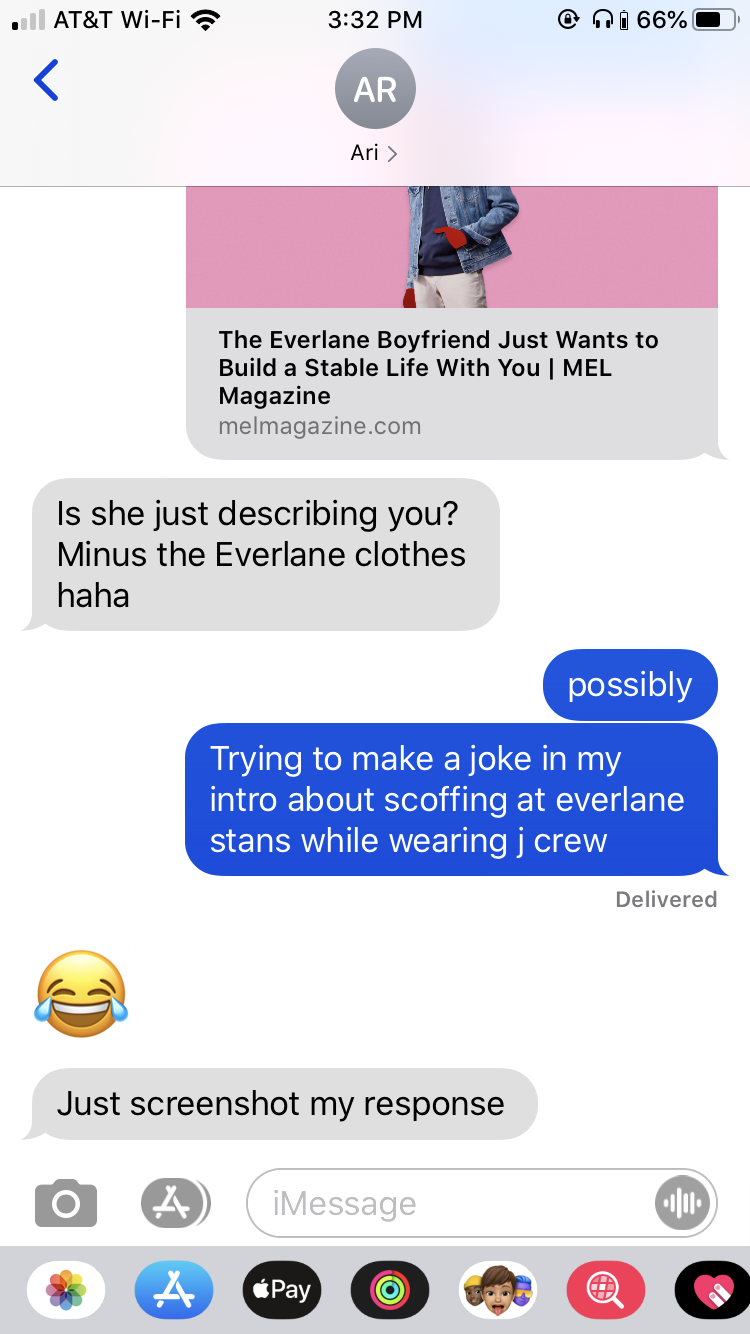 Uh, so, yeah… did you guys know that J.Crew is having a 20-percent off sale right now? Use code YAYMORE.

“An Oral History of Those Creepy-Ass Chuck E. Cheese Robots”
Whoever thought a furry band of dead-eyed animatronic rodents was a good addition to a kids’ pizza parlor might’ve been as deranged as the robots at Chuck E. Cheese’s themselves. And yet, they existed, and had to come from somewhere. Brian VanHooker spoke to the men (natch) responsible about the history behind these beloved terror-bots, from their Disney-inspired creation, to the furious pizza wars of the 1980s, to their unnerving, dilapidated retirement years. READ MORE

The boring line of basics at Everlane, the online clothing retailer for the don’t look-at-me crowd, might not scream “sexy,” but they do say, “I’ll always be here to open jars of pasta sauce for you.” That, in effect, is the Everlane Promise: You won’t get laid wearing these clothes, but you will look boring enough to make great boyfriend material.

When you’re going bald, you can either comb it over with whatever you have left, or you bite the bullet and shave it all off. Unless you’re pushing 70, toupees are all but out of the question. But Phil Ring, a TikTok-famous hairstylist, has been cutting that taboo to ribbons on the social video site, rebranding the toupee to his 200,000-plus followers as a trendy, internet-approved hair replacement for millennials and even Gen Z.

I’m sure by now you’ve heard of the Extinction Rebellion, a group of environmental activists who’ve taken to flooding high-profile locations in the U.K. like Piccadilly Circus, Waterloo Bridge and the area around Parliament on a mission to pique curiosity about climate change by way of splashy spectacle. It’s a tactic that has pissed off people more than anything. But there’s a noble goal behind it: To get 3.5 percent of a nation’s population directly involved in climate change advocacy in order to foment a revolution.

There’s applying for and sticking with a credit card for its ample rewards, and then there’s what the “churners” do: Risking a lifetime’s worth of debt and FICO scores around 500 to burn through credit cards at a blistering pace in the name of racking up as many redeemable points as possible.

So you’ve come down with a cold, but you’re days away from hopping on a plane and flying the friendly skies in an airtight metal tube. You know that if you get aboard and proceed to infect every last one of your fellow travelers you’ll be that asshole. So what do you do? For starters, read our gentleman’s guide to flying with a cold.

What kind of food fills the soul of the man who who produces some of the hottest peppers in the world? For Ed Currie, the horticulturist and business owner behind the Carolina Reaper, it’s his mom’s braciole, because tasting that deliciously stuffed, rolled-up steak takes him all the way back to his kitchen table when he was a kid. We’ve got the recipe, inside — don’t worry, it won’t declare war on your insides.

You Know You Want a Big Tiddy Goth GF

There’s something to the goth gf’s appeal. She isn’t unfeeling and aloof; in fact, she feels things more profoundly. No wonder then, that cuffing one of these covetable heroines (ideally with huge jugs) has become a meme:

Miles Klee probes the icy depths of the big tiddy goth gf meme, from Elvira to The Love Witch and everything in between.