The Never-Ending Quest for a Big Tiddy Goth GF

You know you want one

All of us, in some deep and undeniable way, yearn for the company of a big tiddy goth gf. 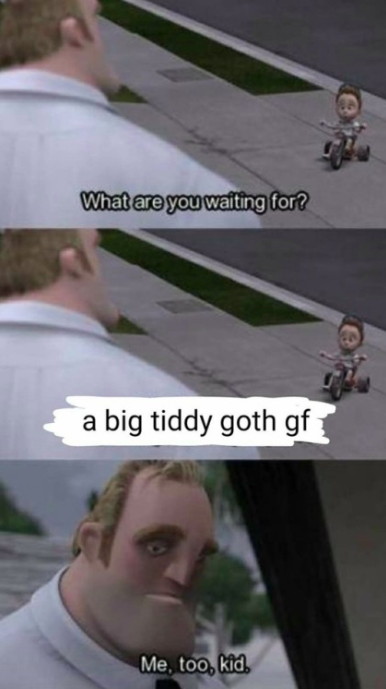 Whence this desire? The answer is complicated. But let us begin with the “goth” element. A goth is a person in touch with the gothic side of the world — all that sumptuous darkness, romantic horror and beautiful death. You might think of this as morbid or even Satanic, but in practice, the goth is usually just a fan of black clothing, Edgar Allan Poe, tongue piercings and Victorian design.

Still, the goth would prefer to stand separate from the relentless cheer enforced by everything from inspirational Instagram posts to daily retail transactions, and so they attain an emotional remove that places them out on a figurative misty moor. Such was the joke in a 2014 Tumblr post by user gothstan, which imagined this conversation with a goth girlfriend: “bb ur hands r so cold,” says the first person, the goth partner then replying: “that me soul.” The haunting exchange has since been shared and remixed thousands of times. Here’s an illustrated version: 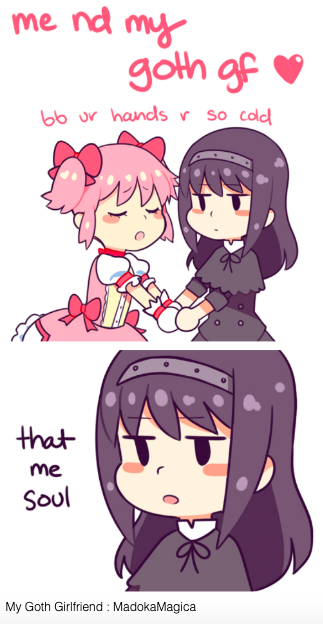 Immediately, we understand something of the goth gf’s appeal. She isn’t unfeeling and aloof; in fact, she feels things more profoundly. She is in touch with the vast, icy core of reality, and she has hardened herself against it. Where others would skate by on the surface of human exchange, content with basic pleasantries, she refuses to ignore the animalistic terror and magnificence that Edmund Burke conjures in his treatise on the sublime landscape art of the 18th century. Her coldness, then, is both a thrilling mystery and an invitation into these depths.

Of course, that strength of personality is none too common — thus the goth gf meme frequently concerns one’s regrettable lack of same. There are, quite clearly, not enough goth gfs to go around (to say nothing of the big tiddy kind). Or maybe we have over-idealized the type to the point where nobody can hope to match it.

Long before this was a running internet gag, pop culture was instilling the idea of a goth-styled outsider as covetable heroine. There was Ally Sheedy’s “basket case” brooder from The Breakfast Club, Winona Ryder in both Beetlejuice and Heathers, the witches of The Craft, and well, Rose McGowan in general. Reaching back further than the past few decades, Morticia Addams, created by cartoonist Charles Addams, set an enduring template for a woman dedicated to the macabre. When it comes to the “tiddy” part of this puzzle, however, there is but a single, curvy explanation: Elvira, Mistress of the Dark.

Elvira is a character played by actress Cassandra Peterson, who used the persona to host a weekly horror movie show on an L.A. TV station in the 1980s. Peterson’s stroke of brilliance was infusing a vampirish role with the spirit of a Valley girl who delighted in her sex appeal and flaunted her cleavage, the subject of endless jokes and double entendres. (The Simpsons, in spoofing Elvira, named their version “Boobarella.”)

Although her low-cut outfit functions as a measure of her camp sensibility, it also flags another possible component of the goth identity — the appetite for carnal pleasure, or passionate lust itself. Anna Biller’s 2016 film The Love Witch trends in this same direction, with Samantha Robinson playing a raven-haired beauty who ensnares the men of her dreams with her magic potions and spells, only to have them essentially die of their ardor. In making memes of our search for a “big tiddy” goth gf, we are speaking not just of bra sizes but the voluptuous nature of flesh, sin and sex. The goth gf is prized under the presumption that she is free of the conventional bedroom hangups — and likely into some kinky shit.

The final ingredient in the big tiddy goth gf cocktail is — what else? — the internet. The awkward shorthand of “gf” for girlfriend and the intentional warping of “titty” are classic touches of online humor. (The choice to voice the “t” in “titty” to get “tiddy” also lends it some rounded heft, as if to describe the weight of actual double-D breasts.) Moreover, the goth gf could be seen as the opposite number to another figure in nearby orbit: the sci-fi obsessed gamer. The implication of many goth gf memes is that the individual in want of said girlfriend isn’t themselves a goth, even if they have some proximity to the goth subculture, via Tumblr, DeviantArt or the (assuredly NSFW) subreddit r/bigtittygothgf, where goths really do share tiddy photos for more than a quarter million admirers.

While goth men, and goth bfs, do exist, there’s a whiff of gender essentialism in how the scene is portrayed. You start to get the sense that men heavily invested in their control over Star Wars, the Marvel Universe, etc., who resent women for turning up in those franchises and cosplaying at the conventions, view the goth lifestyle as an acceptable place for women to exert the energies that would otherwise “ruin” their childhood entertainments. Let the girls have their candles, skulls and musty old books, they seem to suggest, and we’ll worry about the spaceships and lasers and competitive esports streaming. Then, when we’re hopped up on Skittles and Red Bull, we’ll come looking for them… to fuck. 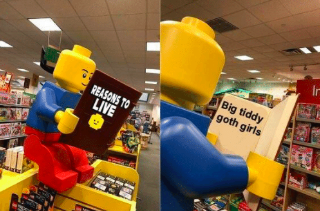 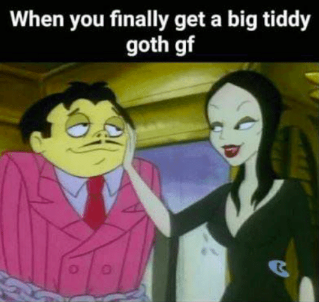 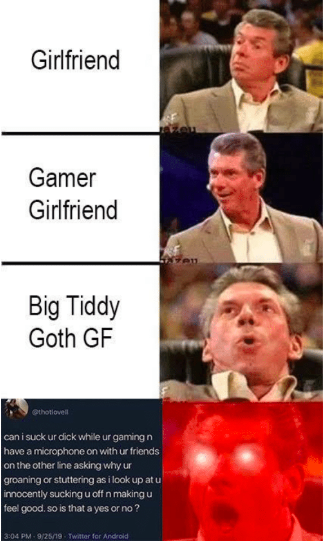 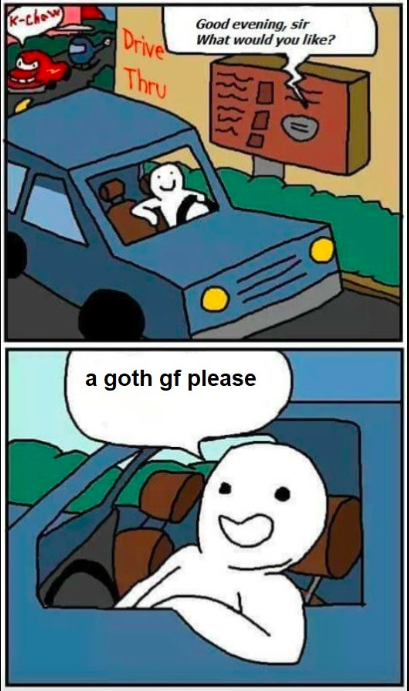 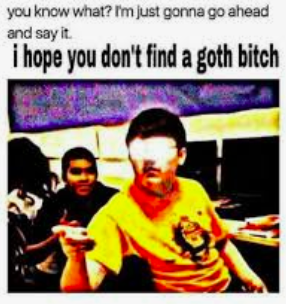 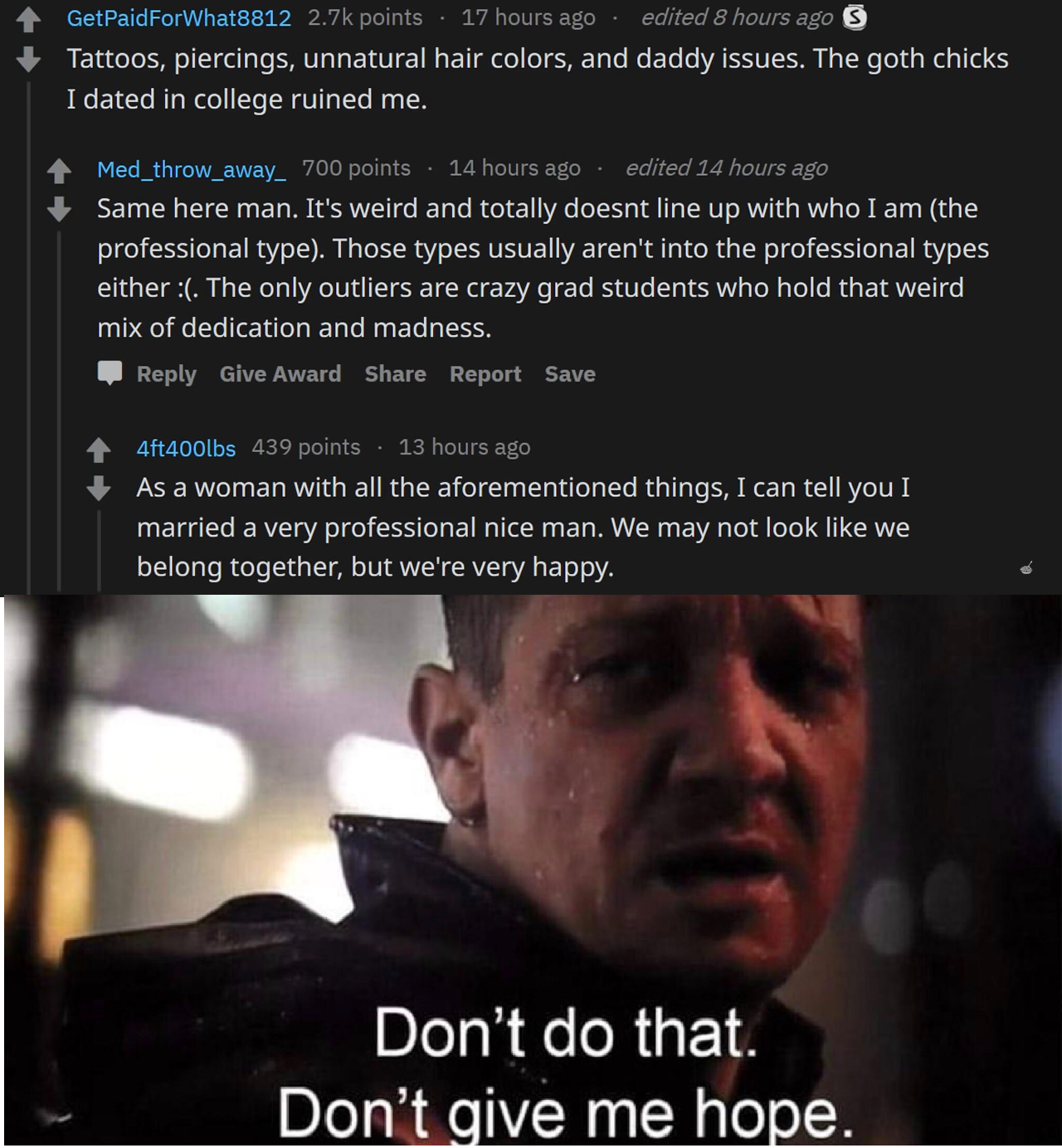 Despite the reductive or objectifying quality of the phrase “big tiddy goth gf,” it appears that the thirst for them is all-encompassing, independent of gender or orientation. It ends up being a pretty wholesome concept, the result being that quite a few people are happy to identify as a big tiddy goth gf. Social media is awash with selfies where they show off the goods in addition to black lipstick or pentagram earrings, carrying on the Elvira tradition, with the hashtag #bigtiddygothgf.

Does this mean the big tiddy goth gf shortage has been largely exaggerated? You have to wonder if the alleged difficulties in finding one are down to laziness, or a gap between avowed and actual preferences for thicker bodies. Then again, the big tiddy goth gf craze may not be driven by literal horniness, and instead the amusement of painting yourself as some forum-lurking nerd whose great ambition is to make out with a girl wearing a Jack Skellington hoodie from Hot Topic.

In that way, you, too, become a character, tormented by a mythical, exotic, peculiar and ample-chested image that exists nowhere else but in the mind’s lecherous eye. The pining despair is the purpose, a melancholic’s cry in moonlight that is answered with an echo, then a silence among the trees. Nothing’s more goth than that.