Sunday Reads: The Other ‘Wolf of Wall Street’ Scam, the Merits of Picking Up Giant Rocks and the Best Noodles You’ve Probably Never Heard Of

Back when my great-whatever grandparents first moved to Western Massachusetts in the early 1700s, they probably had to lift a ton of rocks: A ton of rocks to build their houses, a ton of rocks to clear fields for crops and a ton of rocks to build a stone wall so their cows ‘n’ shit wouldn’t wander into the forest. While I’m sure it was a great way to separate the badasses from the weaklings, I can’t imagine it was much fun. These days, stone-lifting is still a badass feat of strength, but for sport, not for work. That is, strongmen lift rocks in gyms now. It’s really a whole thing. And the tradition of picking up a big stone and putting it back down actually originated long before the 1700s.

“The Perfect Irony That ‘The Wolf of Wall Street’ Film Was Also A Real Life Scam”
If you’ve seen Martin Scorsese’s 2013 film Wolf of Wall Street, you’re likely familiar with the fraud real-life penny-stock scammer Jordan Belfort inflicted upon his victims. But the bigger scam might have been the one that funded the film’s production — one that involved Wolf star Leonardo DiCaprio, a Malaysian kingpin named Jho Low, Paris Hilton, Dumb and Dumber To and all the rich-guy toys you’d expect to find around a billion-dollar con. Unsurprisingly, Zaron Burnett’s examination of what has come to be known as the 1MDB scandal is just as engrossing as the movie it helped pay for. READ MORE

“The Spectacular Culinary World of Muslim Chinese Immigrants”
In the far northwest of China, Chinese Muslims, known as Uyghurs, have long been persecuted by the country’s Han majority, and live under constant threat of arrest and internment. In response, many Uyghurs have fled China for countries like the U.S., knowing full well they’ll never return home again, and in many cases, won’t even be able to talk to their families again (who often cut off communication for fear of retribution).

As such, their only remaining connection to their homeland is their food. And so, Eddie Kim traveled to the San Gabriel Valley area of L.A. to Dolan’s Uyghur Cuisine, one of the only places to get authentic Uyghur food in the country. There, he spoke to Uyghur immigrants, including Dolan’s owner Bughra Arkin, about the Uyghur people’s uncertain future, and how they retain their culture abroad through their unique cuisine. READ MORE

A Bowl of Far-Right Shit for MEL’s ‘Soup Boy’

Last year, Hussein Kesvani went both the good and bad kind of viral for one incredible tweet: 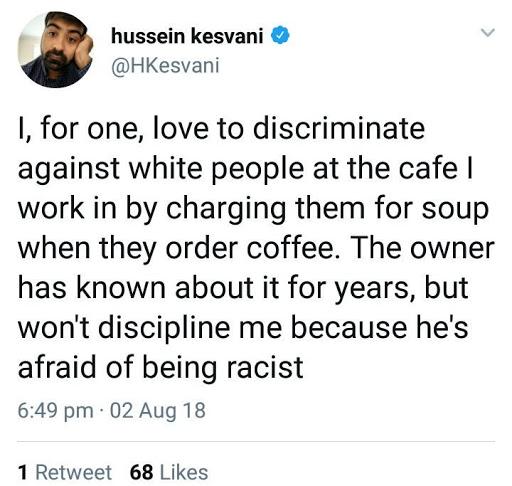 The tweet was obviously satire; yet plenty of Islamophobes were all too happy to take his words at face value, going as far as to threaten Kesvani over DM, harass the publisher of his book and report him to the police. This week, he finally wrote about the experience.

Much like how a Westerner might spend a Friday evening out drinking with friends or passing a joint around, men in parts of the Middle East and Africa unwind and commune by chewing khat. The plant gives a mild buzz not unlike coca leaves, and people will sit around for hours just chewin’ and chattin’. However, khat can cause short-term erectile dysfunction, and there’s very little research as to why. Emmanuel Freudenthal, a writer based in Nairobi, explains how Kenyan men are navigating the unfortunate side effect of such a popular pastime.

Go to College or Die Young

Higher education has played such an integral part in perpetuating inequality that having a college education is one of the biggest factors in life longevity. The correlation between education levels and the risk of early death is even stronger than race, gender and class — largely because it combines all of these factors together. And the opioid epidemic has made this correlation even more startling. Chris Bourn details exactly how higher education is linked to staying alive.

So You Think You Can’t Dance?

There aren’t a lot of things that were truly better “back in the day,” but dancing is one of them. As Andrew Fiouzi discovered, just about everybody in the early 20th century knew half a dozen or so dances that they could bust out to suit the occasion. That’s not really the case anymore — except, of course, for the occasional person who spent weeks learning all the moves to “Single Ladies” to show off at weddings. In fact, even the occasional Elaines busting a move in the club seems to be in decline.

Who’s the secret Phish phan currently running for P(h)resident in 2020? We’ll give you a hint: He’s for the Green New Deal, supports unions and gun control and knows how to noodle to “Tweezer Reprise.”