Where Have All the Penis Fish Gone?

In December 2019, thousands of penis fish appeared on the California coastline. What have they been up to since?

Just over a year ago, our Western coastline was absolutely teeming with phalluses. Well, technically, fat innkeeper worms, which are just so penis-y and so aquatic that we had absolutely no choice but to call them penis fish. Thousands upon thousands of them appeared on Drakes Beach, north of San Francisco, last December. 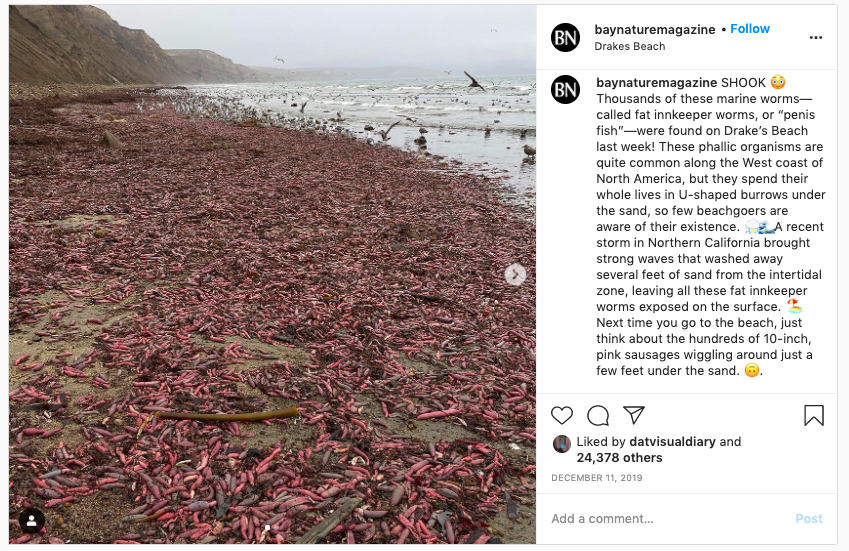 Basically, the fat innkeeper worm is still just doing its thing. Despite shocking the world with their massive beach appearance, they’re actually quite common in shallow waters along the coast from southern Oregon down to Baja California. While one might occasionally be found on the surface, they usually spend their entire lives — up to 25 years — completely underground. In late 2019, however, the Bay Area experienced storms that brought flooding typically only seen every few decades. With those storms came the penis fish.

Without any rough waves to force them to emerge, it’s reasonable to assume that penis fish are simply living in the sand as they always do. Again, they’re actually just unreasonably thick worms. Like other worms, they live off detritus that they catch in their hole using a wad of mucus it coughs up. When it scores some nasties to eat, it sucks the mucus wad back inside of itself, retrieves its meal and sprays the rest of the mucus out of its butt. Can I get a hell yeah?

It’s also worth noting that a close relative of the American penis fish — also known as both penis fish and fat innkeeper worm — is considered a delicacy in other countries. The East Asian Urechis unicinctus, distinct but still similar to the Urechis caupo found in the U.S., is sometimes consumed raw in South Korea with salt or sesame oil.

Surely, we’d made a mistake not to be aware of the fat innkeeper worm until this 2019 oceanic unveiling. It’s a worm that’s shaped like a dick and shoots mucus out of its butt. It’s a clear sign that we absolutely need to be more in-tune with our ecological surroundings.