Do Not Attempt to Out-Pizza the Hut

I’ll bet you have a favorite pizza place, and I bet it isn’t Pizza Hut, one of the aggressively mediocre chains that blanket the country. The brand embodies the unfortunate truth that an eatery can gain dominance not by being any good, but widely accessible and “good enough” for customers with few dining options. Everybody seems to know this, yet since 2016, well before they updated their 40-year-old recipe, Pizza Hut has sounded excessively confident in their commercials, hammering a braggadocious slogan: “No One Out-Pizzas the Hut.”

It’s the sort of catchphrase you quickly internalize without much examination. “Oh yeah, it’s Pizza Hut, and no one out-pizzas them. Now the football game is back on.” But if you sit with these words for a while, their strangeness becomes undeniable. They verbed “pizza.” So what does it mean to pizza? Given that many establishments serve much better pizza than you find at the Hut, maybe pizza-ing is not the literal act of cooking or refining pizza. I believe, rather, that their boast refers to the curation of pizza vibes. On that score, Pizza Hut may have some credibility. The signature red roofs, the stuffed-crust-type novelties, the kids’ birthday parties, the pre-pandemic casual dining — all of it feels like the cheesiest slice of American pizza culture. Pizza Hut may as well be saying, “No one else is Pizza Hut,” and they’d be absolutely correct.

So what would happen if their restaurants were challenged on this foundational claim? There are two possible outcomes: Either the rival is destroyed in the attempt, or they succeed, in which case their life is forfeit anyway, since the material universe cannot tolerate such a violation.

In this way, any scheme to out-pizza the Hut is akin to the prospect of time travel. You can have your cute little theories on how this might be accomplished, but you’ll never get past the blueprint stage — and whoever does will be toying with the fabric of reality itself, placing themselves in mortal peril. It’s simply not worth it. Imagine you did somehow construct a space that was more Pizza Hut-esque than original Pizza Hut — more vibrant versions of the same colors, a thicker scent of processed tomatoes and mozzarella in the air, teen employees with additional pimples serving pan pies that taste like the average of all average junk food.

Yes, you would have out-pizza’d the Hut, but why, and at what cost? You will look upon your work and despair. Strictly speaking, as long as Pizza Hut exists, there is no reason to out-pizza them. 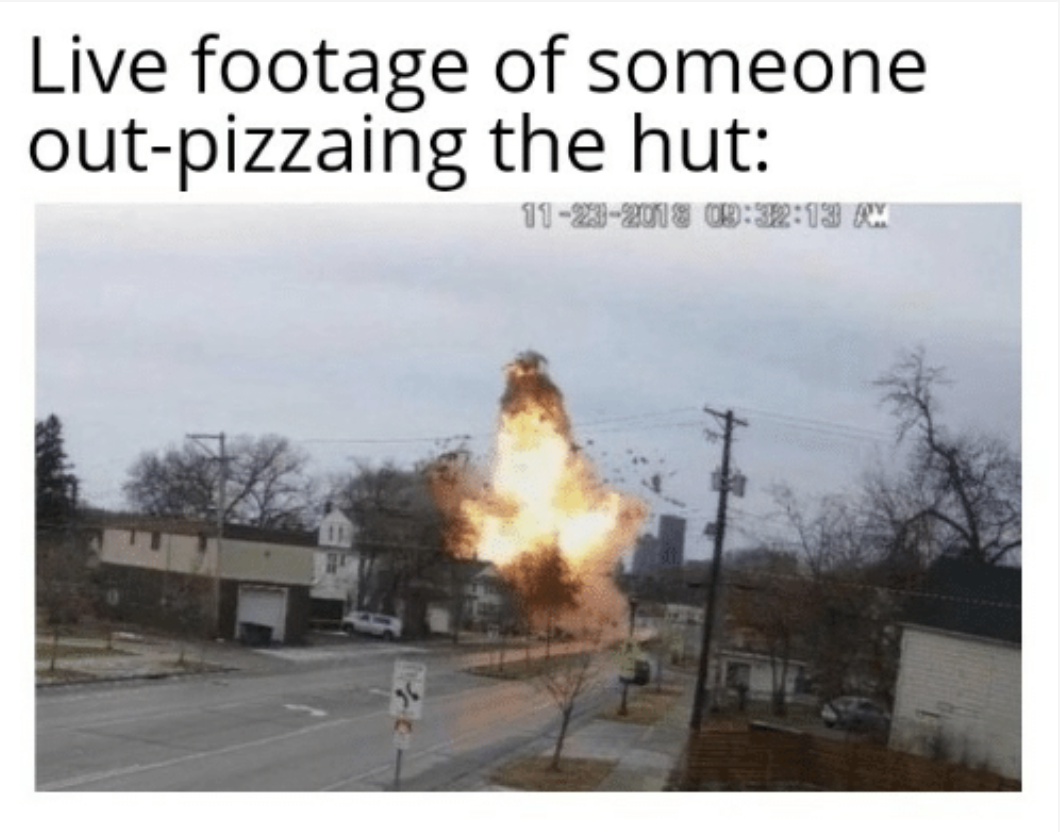 The ancients had their myths of hubris punished by fate: Icarus falling to his death when he flew too close to the sun, the great warrior Achilles fatally wounded at the ankle, his only weak point. Centuries later, we have the hegemony of Pizza Hut, a reality we may not like but dare not resist, in fear of meeting a tragic end.

The smartest course is to avoid these restaurants completely, because once the notion of beating them takes hold, it gives way to obsession. How quickly you shall abandon what matters — your family, your lover, your own dreams and ambitions — to pursue the final, impossible form of pizza, just as Ahab sought revenge against a white whale that could not be killed.

That is no kind of life, my friend, unless you wish to be truly alone in this world. Let it go, and do not stand against the Hut. Only Domino’s can do that.