Ranking Salad Dressings by How Healthy They Are

Balsamic vinaigrette? Caesar? Ranch? Which is least likely to turn my otherwise healthy salad into a mean, green death machine?

Conventional (and nutritional) wisdom says that the dressing is the unhealthiest part of every salad, which is generally true: Store-bought dressings in particular are usually filled with extra calories, unnecessary sugars, heart-busting saturated fats and tons of sodium. We also have a habit of drowning our salads with dressing, using way more than the recommended serving size — one serving of store-bought ranch dressing, for instance, is a laughably modest two tablespoons, which already amounts to a pretty significant 140 calories.

Not all salad dressings have the capacity to ruin your otherwise healthy salad, though, which is why I asked Dana Hunnes, senior dietitian at the Ronald Reagan UCLA Medical Center, to help me rank popular salad sauces by how healthy they are — from pretty okay to Lord Salad Destroyer the Fifth.

Here’s what she came up with. 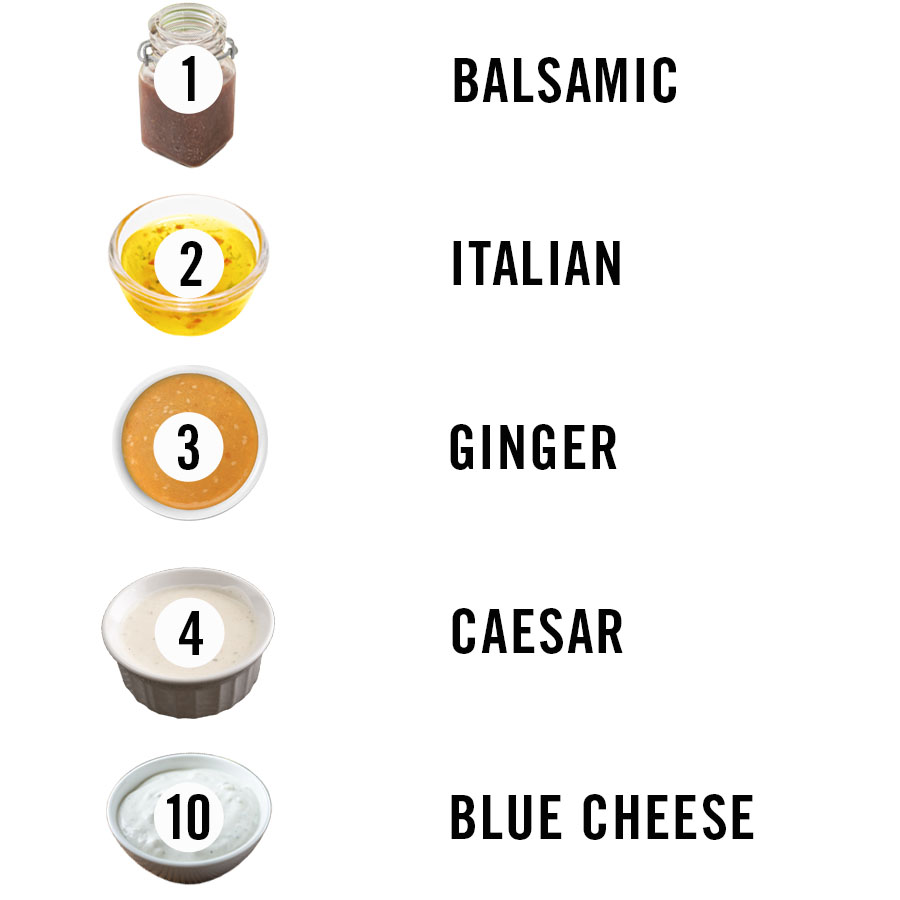 1) Balsamic Vinaigrette: “This is probably the healthiest, especially when it’s truly just balsamic vinegar and olive oil,” Hunnes explains. Studies suggest that balsamic vinegar, in addition to containing very few calories and being fat-free, contains antioxidants that may lower cholesterol and promote healthy skin. It might also reduce high blood pressure and contains probiotics that make you feel full, which could prevent you from consuming extra calories. Meanwhile, olive oil also contains cancer-fighting antioxidants and heart-healthy monounsaturated fats (studies also suggest that it has the capacity to reduce erectile dysfunction, which is always a plus).

Again, though, some store-bought balsamic vinaigrettes are pumped full of extra sugars and salts that obviously make this dressing much less healthy. “When balsamic vinaigrette has a bunch of other ingredients that make it creamier or saltier, that’s not quite as good,” Hunnes emphasizes. “But it’s still probably better than anything else on this list.” Fortunately, since balsamic vinaigrette really only needs two ingredients — balsamic vinegar and olive oil — you can easily make it at home to avoid those extra unhealthy additives.

2) Italian Dressing: Much like many other dressings on this list, Italian dressing is essentially a vinaigrette like the one mentioned above. However, store-bought versions usually include a slew of additional unhealthy ingredients, including sugar or corn syrup. “Its base is vinegar and oil,” Hunnes reiterates. “I just don’t like how they add sugar, especially since there’s sugar in almost everything these days. But it still has less sugar than French dressing [more on that later].” For example, Kraft Zesty Italian Dressing contains two grams of sugar per serving (two tablespoons). This might not seem like much, but again, we tend to use more than two tablespoons, and nobody really needs extra sugar in their salad dressing.

3) Ginger Dressing: “This is definitely a dressing with lots of ingredients,” Hunnes says. “Most of them are good for you and have anti-inflammatory properties, like ginger, although I’m not sure this contains enough [ginger] to really call the dressing an anti-inflammatory.” Hunnes also mentions that ginger dressings, especially store-bought versions, tend to contain lots of salt — a meager two tablespoons of the popular Makoto Ginger Dressing, for instance, contains 15 percent of the daily recommended intake. She also says, similar to other dressings on this list, ginger dressings usually contain at least some sugar in the form of either honey or corn syrup, honey being the healthier of the two.

4) Caesar Dressing: “The base of this dressing — lemon juice, eggs and olive oil — is basically like mayonnaise,” Hunnes explains. “The other ingredients — Worcestershire sauce and anchovies — are really salty, which may actually be the worst thing about this dressing: The high salt content and perhaps the small amount of saturated fat that comes from the small amount of parmesan cheese it contains.” Two tablespoons of Kraft Classic Caesar Dressing, for instance, contains almost as much salt as the above-mentioned ginger dressing and 12 grams of fat, or 18 percent of our recommended daily intake. So slathering your Caesar salad with a giant dollop of this dressing can easily provide you with close to enough heart-breaking saturated fat for an entire day.

5) Thousand Island Dressing: “The ingredients in Thousand Island dressing kinda start like a Caesar dressing, but then they substitute tomato puree (or ketchup) for the anchovies, and this also has paprika in it for color,” says Hunnes. “It’s still high in fat — not that fat is the devil [some fats are certainly better than others] — and salt.” Compared to the above-mentioned Caesar dressing, a similar serving of Kraft Thousand Island Dressing contains the same amount of fat, a little less salt and three more grams of sugar.

6) Ranch Dressing: Hunnes says this is basically a mixture of mayonnaise and sour cream. “It’s salty, high in saturated fat and tangy,” she explains. Much like almost every dressing on this list, as I concluded in my analysis of the ingredients in ranch dressing, this essentially adds some extra fat and calories to everything, both things that none of us really need:

“It’s basically just an extra dose of vegetable oil flavored with fat and MSG that’s been pumped full of preservatives. One serving of ranch (two tablespoons) also amounts to 140 calories, so even just a few dollops on that slice of pizza puts you significantly closer to your recommended daily intake: The average woman should consume no more than 2,000 calories per day in order to maintain her weight, and the average man should consume no more than 2,500 calories. Still, so long as you’re not guzzling the stuff straight out of the bottle, a little ranch here and there is probably the least of your nutritional worries.”

7) Salad Cream: This is more a British condiment than an American one, but come on, it’s called “salad cream.” “This is essentially mayonnaise,” Hunnes says, which isn’t the least bit surprising when I consider my mayo-obsessed British editor who suggested (okay, insisted upon) this entry. “It’s simple, has some cholesterol in it — nobody knows whether that’s safe anymore — and contains some unsaturated fat from oil. It’s not often too salty, so that’s not too bad. It’s very creamy and likely satisfying if you like that flavor.” It also apparently contains a fair amount of sugar — Heinz Salad Cream, for example, boasts a not insignificant five grams per two tablespoons.

8) Green Goddess Dressing: “This reminds me vaguely of Caesar dressing in that it contains anchovies, but it also has chervil (parsley) and other green herbs,” Hunnes explains. “This is going to be creamy, which can be owed to mayonnaise and sour cream — sour cream has casein [a possible tumor promoter] and saturated fat — and salt from the anchovies.”

9) French Dressing: “This is a very sweet dressing (it almost tastes like ketchup) that’s not particularly creamy,” says Hunnes. “It almost seems to have more sugar than tomato, and sugar can be pro-inflammatory.” Two tablespoons of Kraft French Dressing contains a whopping 13 grams of fat and six grams of sugar, which again, is a lot considering the small servings size. This also explains why Hunnes says, “This isn’t a dressing I’d recommend for a person with diabetes.”

10) Blue Cheese Dressing: “This is salty, but it also has a lot of saturated fat in it from the bleu cheese, sour cream and milk,” Hunnes says, adding that all these ingredients also contain that potentially dangerous casein we mentioned earlier.

Now, I want to emphasize that none of these salad dressings, especially when consumed according to their serving size — or at the very least, consumed in somewhat reasonable amounts, so no guzzling, my dude — probably aren’t going to be the death of you. In fact, if blue cheese dressing is the only thing that can get you to eat a salad, you’re still better off getting those greens in than not.

But if you’re on the brink of a big weight-loss accomplishment — say, you just can’t lose that last pound or two — maybe consider swapping out the ranch for balsamic vinaigrette next time around. That said, if you could care less about minor nutritional gains, ranch it up, bro.