What is a vibe? Something too ephemeral to quantify — but that doesn’t mean it isn’t there. The vibe is, well, a vibration, one that registers only on a hidden sense. A frequency that fills a room, giving it mood and character. And because vibes, from the West Coast hippie-surfer culture to the Quincy Jones-founded entertainment magazine, are widely associated with good friends, chill hangs and leisurely fun, a “vibe” would seem to have, on the whole, quite positive connotations. The vibes are what you dig, what you groove on. “Bad vibes” are the anomaly.

But perhaps because the greater 2019 vibes are, shall we say, “off,” we seem all the more invested in recognizing the right ones. The invisible antennae we have for detecting proper and desirable vibes are extra-sensitive, picking up on heretofore unnoticed examples. Importantly, vibe is also created by the people noticing it — a tree falling in the woods doesn’t have any vibe unless we care to ascribe one — and so folks can vibe with each other, a situation or an idea. Not vibing with someone or something is the sign of a not-fully-expressible clash: You may not understand why you aren’t vibing with your friend’s suggestion to meet up for Thai food, but you know when the vibes aren’t lining up in harmonious fashion. Vibes speak volumes.

Over the past few months, “vibe” appears to have gradually supplanted the memefied version of the word “mood,” gesturing toward many of the same qualities as that now overused slang: shared aesthetic, emotional relatability and mutual understanding. Yet a vibe is never quite a mood. For one thing, while moods are big and emphatic, a vibe trades in subtlety. Vibes are the gray to the black-and-white of moods. As such, they can be trickier to pin down — even if they characterize a wholly interior state. Therefore, we have the “vibe check,” which, like “gut check,” describes a call to attention and evaluation: How are you feeling? How do you sync up with your surroundings in this moment? Where will you go from here, and what do you plan to do next?

But it turns out vibe checks aren’t always harmless. Thanks to the shifting sands of Tumblr, the phrase has taken on a confusing new meaning connected to basically random acts of violence. Across that platform and Twitter, users are now slapping “vibe check” captions on images and scenarios where an individual is menaced with (or subjected to) physical harm in the form of fists, blunt objects and guns. According to one redditor, the joke is plain irony: that an attacker is asking the victim “how they feel right as they are beaten, shot or pummeled to death.” 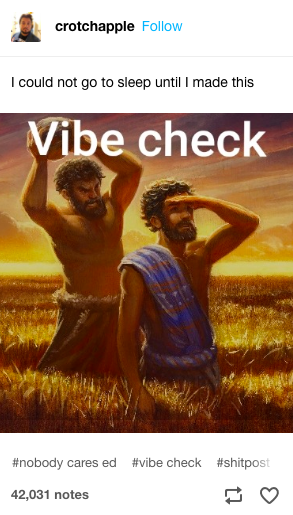 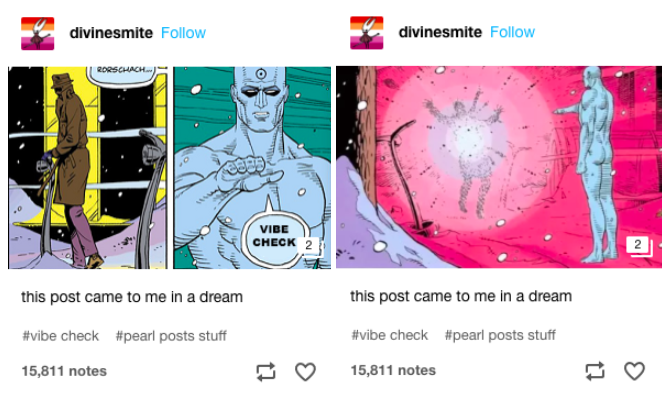 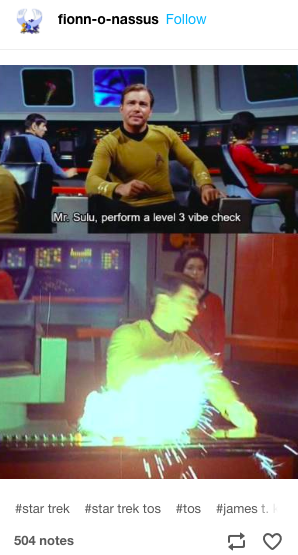 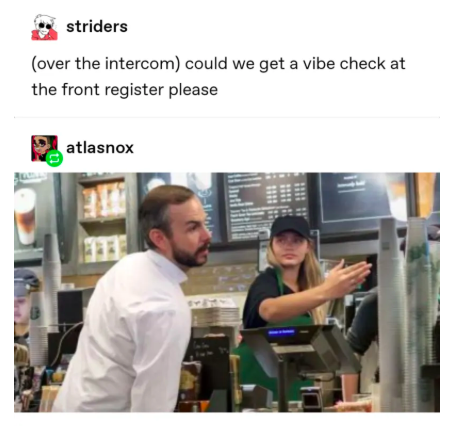 Behind the visceral humor, however, is another possibility, implied by the increasingly popular remark “I would not survive a vibe check right now” (and related commentary, such as “Sorry your vibe check bounced,” or “I’m not depressed. The doctor told me I’m just not vibin.”) Viewed through these sentiments, the terror of the vibe check memes is figurative, not literal; the humor lies in our resistance to self-discovery, lest we find a vibe we don’t like. If a vibe check demands the kind of heavy introspection that therapy does, then it carries genuine risks — and those risks come from within, not without. All the punching and lasers, etc., are just manifestations of how viciously we might wound ourselves by facing unpleasant personal truths. That theory would help to explain, at any rate, the purported vibing of distressed women in psychological horror films.

So we know that vibes, while furtive and at times ambiguous, are also durable, even powerful. In fact, their stealth omnipresence gives them the element of surprise — and that surprise isn’t necessarily nice. Luckily, we have a say in the matter. A vibe check or ongoing vibe-consciousness allows us to work toward a balance, the spiritual homeostasis that’ll keep us from falling apart. In response to the violent vibe check memes, people are now posting wholesome variants that reframe the process as a healthy, natural wellness habit. Instead of dreading and fearing bad vibes, we can be in touch with the right ones.

You vibe with that? 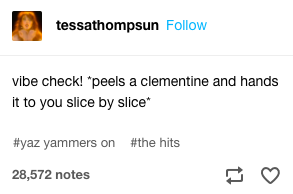 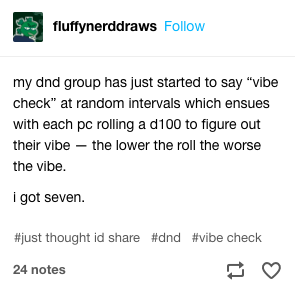