THIS IS SERIOUS JOURNALISM, PEOPLE

Curious about its accuracy, I decided to stake out my local Domino’s. The plan is as follows: I’m going to place an order for delivery while hanging out in the restaurant, then compare each progress mark on the tracker with what’s actually happening with my pizza. Then I’m going to follow the delivery guy in my car until he arrives at my house, where my wife will be ready to receive him. For the record, I’m going into this hoping that the pizza tracker is not in fact a lie, but I’ll be honest, I do have my suspicions, so I plan to get to the bottom of this hunch.

So that I can watch my order being made, I arrive at my Domino’s and place an order for some boneless chicken. I’ll eat this in Domino’s while staking out the place to avoid any suspicious lingering. 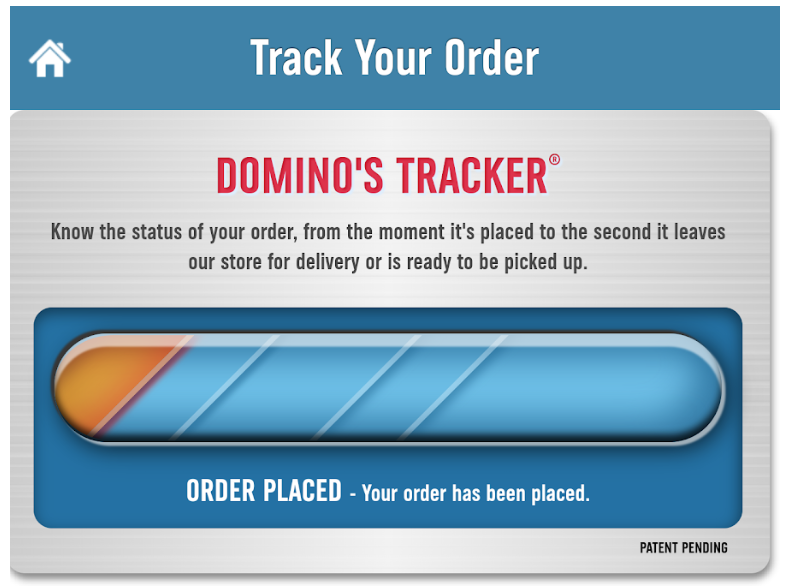 As soon as I receive my chicken, I place my order to be delivered to my house. I order a half plain, half Hawaiian pan pizza — that way my order is plenty distinct and it can’t be confused with anyone else’s (plus, pineapple on pizza is delicious, go fuck yourself). The tracker pops up in my Domino’s app, confirming that my order was placed. Like James Bond sitting next to a cheating classmate in a pop quiz, I stealthily shield my phone from any Domino’s employees, lest my covert mission be exposed.

Once I place it, I notice my order appear on the order screen behind the counter for the pizza makers. It’s very exciting! Fortunately, this Domino’s has its kitchen out front behind glass — similar to this picture — so every step of the process can be observed. It’s the perfect type of location for a stakeout. 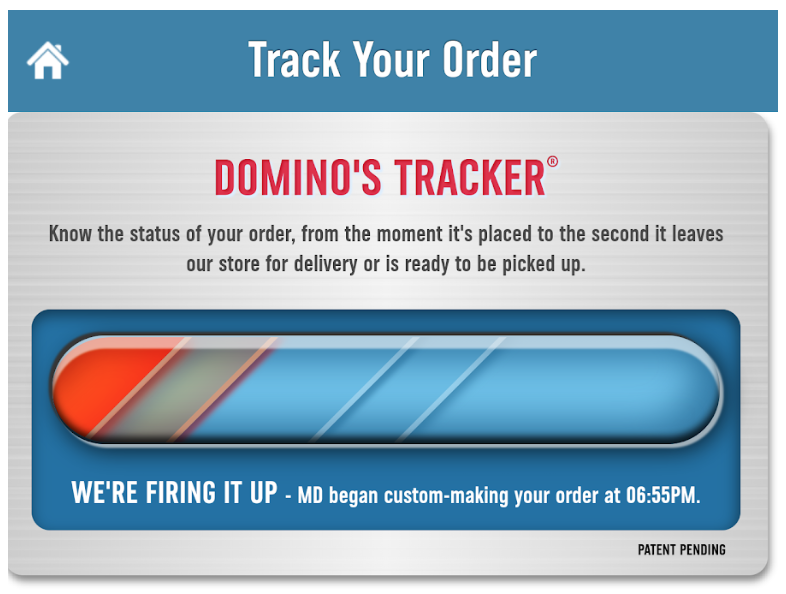 The Domino’s Tracker says “We’re firing it up,” and I’m not quite sure what that means. The ovens have been on all day, after all — they’re not firing them up for me, that would just be weird. I guess that means they’re beginning to make my pizza, but despite this notification, I see no signs that my pizza is being made. Several pizzas at this time are swiftly put together — a plain, a pepperoni, another pepperoni — but none are in pans and none have pineapple. I HAVE UNCOVERED THE FIRST LIE. 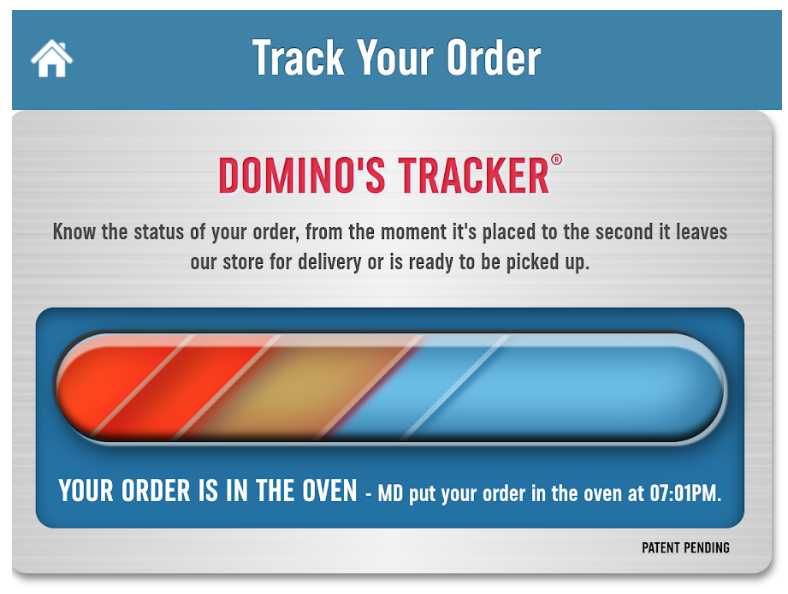 The tracker hits its next stage and tells me my food is in the oven, but I saw none of this happen. From what I can tell, my order hasn’t even been assembled yet, much less already baking in the oven. I fear that maybe I missed this happen and that I’m totally botching my mission. I also worry that I’ll have to do a whole other stakeout another day, which means I’d have Domino’s twice in two days, which I probably shouldn’t do if I want to live to see my next birthday.

Turns out, I didn’t miss a Goddamn thing. At this time I see the Domino’s employee grab a pan pizza from under the counter and quickly put together my pie. It’s definitely mine, as I notice the ham, bacon and delicious pineapple on only half of it. Within a minute it’s assembled and placed in the oven, which is a slow-moving conveyor belt oven where pizza goes in raw on one side and comes out the other side perfectly cooked. A marvel of engineering, if you ask me (for the record, you definitely shouldn’t ever ask me anything).

Despite being impressed with the oven, I have now proven that the tracker is utter bullshit. I even text my wife — who is waiting at home to receive the pie — to tell her what I’ve discovered. 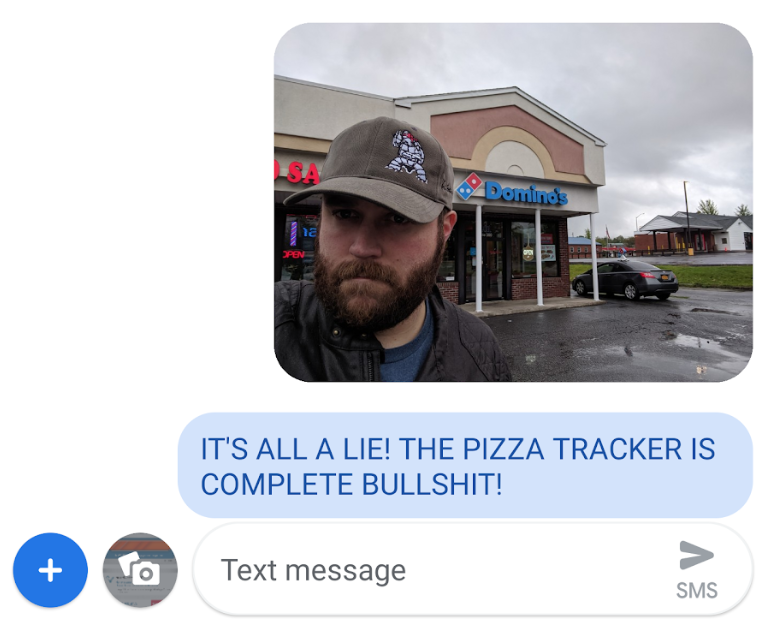 Needless to say, at this point I’m crestfallen. A full 11 minutes have gone by before my order was even begun, and it was placed in the oven at 7:07 p.m., five whole minutes after the tracker told me it was in there. From this point on, I know it’s all a lie. There’s no going back now, Domino’s — the secret is out. 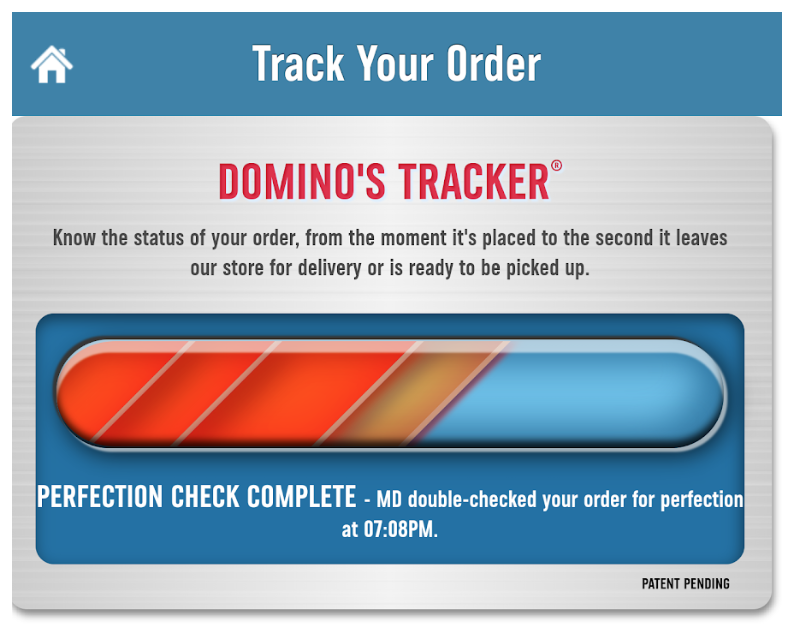 No, there’s no perfection check. You just put it in the oven ONE MINUTE AGO!!!

I’m not like a private eye or anything — much of my time is spent trying on makeup in dimly lit bars and watching men pee in train station urinals — so I’m probably not the most adept at keeping a low-profile. So I think the Domino’s guys are becoming wary of me, especially considering I finished my chicken 10 minutes ago and I’m taking copious notes in a notebook as I’m sitting at the counter. Perhaps they think I’m a plant from corporate. I’m not sure, but I’m definitely getting the eyeball from a couple of these guys. 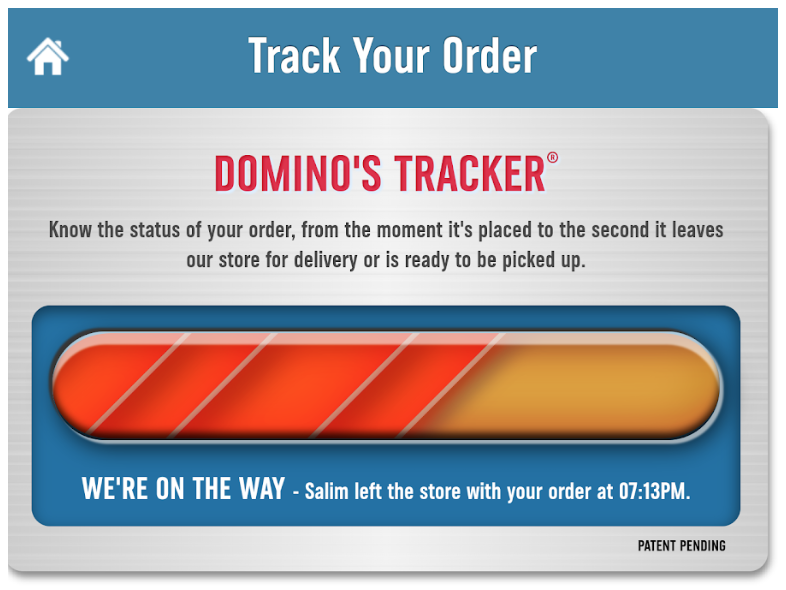 Nope! My pizza is still in the oven. In fact, I can just begin to see it peeking through the other side on the conveyor belt. Once it’s through, one of the employees grabs it off the belt, quickly removes it from the pan, slices it and places it in a distinct black pizza box, which notes that it’s a pan pizza, whereas the rest of the boxes are all white. I once again applaud the brilliance of my pizza choice, though my high is short-lived when I realize that there was in no way any kind of “perfection check” of my order.

Over the next few minutes, I try to determine who Salim is, as that’s who the tracker says is delivering my pizza, and that’s who I’m going to have to follow back to my house. Three different employees arrive within the next few minutes, and for the sake of fairness, I will call them all Salim, regardless of their race, creed or color. Salim 1 arrives at 7:16 p.m. and begins helping make the pizzas: I cannot discern if he is a delivery guy or not. Salim 2 — who arrives at 7:17 p.m. — is definitely a delivery guy, but he comes in, drops off his insulated bag and goes in the back. When Salim 3 arrives a few seconds later, he goes right to the orders and checks out my box. Noticing that something’s missing, Salim 3 grabs a cup of ranch dressing and puts it in my box.

Way to go Salim 3! There actually was a perfection check, and Salim 3 indeed made sure my order was perfect. I’m definitely happy with the service of Salim 3. Even if the tracker is bullshit, Salim 3 is the real deal.

Within a minute, Salim 3 has gathered up the orders and is out the door, a prompt, efficient fellow. I then conspicuously run outside, start my car and wait for him to exit the plaza. He pulls out in his Honda CR-V, and I follow right behind him. Meanwhile, the tracker says my order is still “ON THE WAY.” Yeah, now it’s on the way, four whole minutes later.

I struggle a bit to keep up with Salim 3, who proves to be a speedy driver, but I lose sight of him for only a second, then quickly catch up. He is going away from the direction of my house, so I presume that I’m not the first stop.

Salim 3 pulls into someone’s house, and I pull into a bank parking lot across the street. I carefully watch Salim 3 as he gets out the order and brings it to the front door. I also try to think of plausible excuses as to what I’m doing if questioned by anyone, but I can’t think of a good cover for what’s essentially me stalking a surprisingly diligent pizza man.

With his first order delivered, Salim 3 pulls out of the driveway and heads left, so I pull out just behind him. He once again zips along, and I manage to lose sight of him again — for almost 10 seconds this time. I finally catch up with him at a stop light, and to catch back up, I’m forced to run a red light and cut off oncoming traffic.

The delivery man and myself pull onto my street, and Salim 3 proceeds to drive around a bit, looking for my house (every delivery guy struggles to find my house, so this is a forgivable offense). Salim 3 ends up driving past me as he looks around, and I’m pretty sure he darts me a suspicious look. After all, I’m in a bright white SUV and have been following him for the last 20 minutes, so he’s probably spotted me by now.

After a few minutes, Salim 3 calls my cell — which I hope he can’t hear ringing in my car, mere feet away — and asks which house I’m in. I tell him, and he pulls up to the right spot within a minute, delivering the pizza to my wife, who has been diligently waiting. He then leaves and is on his way. At this point, the tracker still says my pizza is on the way, so I assume while the other stages are bullshit, this one requires some sort of confirmation button by the delivery guy to be pushed. 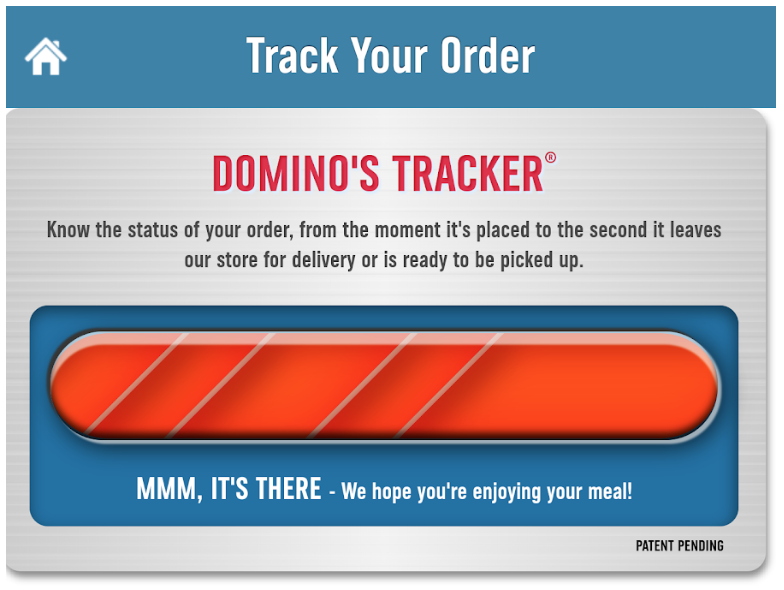 About eight minutes after the pizza arrived, the tracker says it’s been delivered. My guess is that most people never see this screen because they’re already eating, but I was surprised it took so long to switch over. Anyway, I’m now enjoying my delicious Hawaiian pizza while feeling pathetically proud of myself for successfully completing my assignment.

So sure, the Domino’s Pizza Tracker was only off by a few minutes, but it was pretty clear that the progress bar was in no way related to what was actually going on. Instead, it seems like it’s just a pre-timed estimate of how long each step should take, but in no way is it customized for your order.

In short, I totally blew the lid off this whole pizza tracker thing, man. I don’t want to compare myself to Woodward and Bernstein or anything, but I’m pretty sure they never stalked a pizza man on a rainy evening to expose the truths that will haunt a generation. After all, they had Deep Throat to spoon-feed them what they needed to know, whereas I only had my notebook, my Domino’s app and my undying dedication to the truth. And to pineapple on pizza.