A man who claims to be a Taliban member is making waves on Twitter, and he’s attracted a surprising audience — including conservative Americans and the ‘post-right’

He had joined Twitter a month earlier, writing commentary on the Taliban and Islamic beliefs exclusively in Pashto. Malang claims he is a member of the Taliban himself, with photographs purportedly showing him in the field. But, perhaps inspired by the hurried departure of U.S. forces from Afghanistan at the end of August, for the first time, Malang began to tweet in English.

Since the Taliban took control, Malang’s account has become a veritable factory line of content, and he’s racked up 30k followers for his efforts. Much of the material is propagandistic in nature — video footage of happy Afghan citizens celebrating the arrival of armed Taliban forces, joyrides in American Black Hawk helicopters, smiling kids playing in military wreckage. But there’s also a deep appreciation of memes, which Malang uses to critique the West, elevate Muslim fundamentalist ideas, peddle anti-Semitism and homophobia and drop lazy shitposts.

In other words, Malang would be a striking match for a young, far-right American, trolling Reddit forums, rubbing elbows with Boogaloo Bois and making a name as a memefluencer… except that Malang appears to live in Afghanistan and hates America.

Twenty years ago, it would be nearly impossible to imagine casually communicating with the Taliban via short-form picture jokes sent on a phone. These days, you don’t have to imagine — Malang is constantly interacting on Twitter with English speakers, presumably from Europe or the U.S., who express both admiration and disgust for the Taliban’s actions and Malang’s own rhetoric. He also has a growing YouTube channel and is the darling of the budding Reddit community r/TalibanTwitter. It’s a fascinating diorama of online culture today, given substance by the massive implications of the Taliban grasping violent control over swaths of Afghanistan.

On their face, these “Taliban memes” regurgitate some of the far-right’s favorite templates, including the sadboi Wojack, Yes Chad and Trad Girl, with an eye toward spoofing Western hypocrisy and the failures of progressivism. It’s here that we see a huge overlap between the two demographics, with Western fans in the replies expressing support for Malang’s fundamentalist memes regarding crime, punishment, gender roles and multiculturalism.

In some ways, we could’ve seen this coming — America’s obsession with conservatism, religion and oppressive politics has morphed after taking root in niche spaces like Chan boards and chat rooms, where irony and cynicism reign supreme. The American conservative movement has splintered, too, with an increasingly large cohort of “post-right” ideologues who reject the failures of the state while still upholding “traditional” values around identity and social change.

“Being flippant about people having rights, whether it’s women or LGBTQ people, and basically creating hostility through memes is something that really grew in the American far right,” says Don Caldwell, editor-in-chief of KnowYourMeme. “But beyond the content itself, I think Malang’s memes demonstrate how visual symbols cross both cultural and language barriers. Sometimes, the meaning can change — Hong Kong protesters using Pepe the Frog is very different from neo-Nazis in America using it. But many times, the core idea remains the same.”

Perhaps the biggest factor is how memes allow someone to flatten the complexities of casual misogyny, homophobia and anti-Semitism into a straw-man argument designed for viral support. Naturally, right-wingers have responded to Taliban Twitter accounts with deranged appreciation and fresh content, with memes favorably comparing the Taliban’s takeover to the January 6th insurrection and even suggesting they’re analogous to heroic Confederate fighters in the Civil War. (The most common meme response I’ve seen on Malang’s posts is a simple one: “Based.”)

Consider it another problematic chapter in the story of how memes spread hate, with research showing a “trickle-up” effect from extremist subcultures into mainstream channels like Reddit and Twitter. The influence of a meme is outsized compared to the effort it takes to make and share it, and the glaring flaws of moderation across social media giants like Facebook and Twitter have hampered efforts to quiet extremist speech. Add in a big dose of weaponized irony and feigned sarcasm, and you have all the ingredients for a viral success. (And yes, right-wing personalities are already sharing them in earnest.)

But is Malang some sophisticated propagandist, paving the way for Taliban sympathy around the world? I don’t think so, and neither does former MEL contributing writer Hussein Kesvani, author of Follow Me, Akhi and an expert on digital anthropology who has been “trying for weeks to bait Malang” with his own memes. He observes that Malang’s operation lacks a sense of focus, with little originality and depth in its commentary.

“I’ve seen some of his memes originating in other places, by the Muslim ‘manosphere’ guys who have been posting this content for ages, and from Western trads who valorize Islam because they see it as ‘anti-woke.’ Their solutions to problems boil down to ‘move out of cities, start a family, go to church,’” Kesvani tells me. “I think for a lot of Western fans, these memes are expressions of nihilism in politics. But the Taliban won. They’re building their trad society now. So it’s absurd, and very funny in a dark way.”

While Malang is the most popular meme-loving man claiming to be a Taliban fighter on Twitter, he’s not the only one. But is Malang really the Taliban minister of meme communications? Or just a dude with a severe bout of poster’s disease, as Kesvani suggests?

To make everything more chaotic, many people are pulled to Malang’s account in the hopes of dunking on a random (alleged) Taliban fighter located several thousand miles away from them. “The viral instance I saw was using meme culture to clown on him, which I thought was interesting. Just stuff like the ‘ligma,’ ‘sugma’-type jokes, which he then wanted explained to him,” Caldwell says, laughing. “I really can’t imagine this kind of exchange after 9/11. Not at all.” 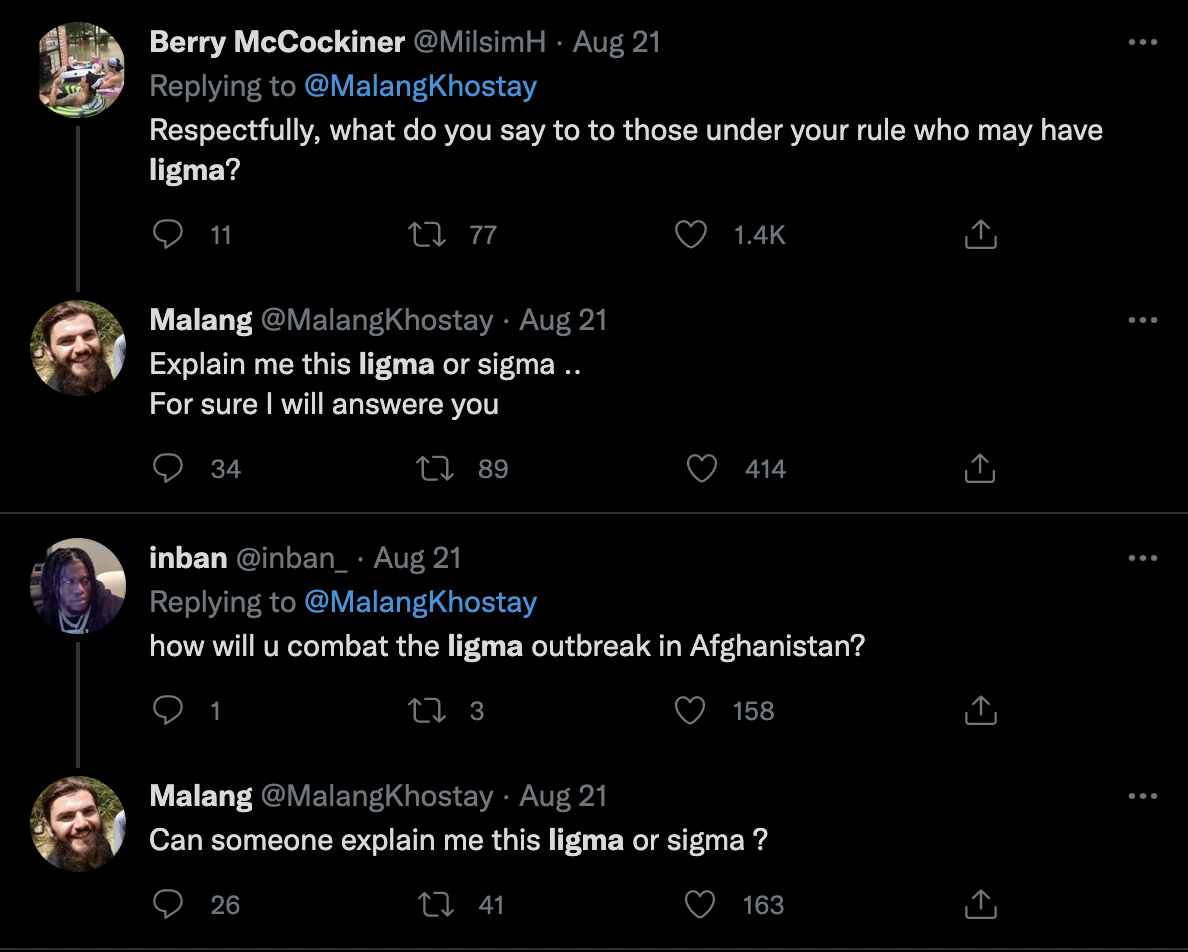 In a sense, even Taliban propaganda is ripe for harvesting by the manosphere, which adds a layer of entropy to an already absurd situation. I actually DM’d Malang and sent him a list of questions, thinking that it would be a long shot for him to speak to an American journalist who trafficks in the content he hates. But his response surprised me: “Sure I will answer you,” he wrote. “First of all can you tell me how I can verify my account?”