We Must Study J.K. Rowling to Find a Cure for Poster’s Disease

As a wise woman once said, ‘You should have just sat there and ate your food’

The reality TV star Tiffany Pollard, a.k.a. “New York,” has enjoyed such a legendary run of TV appearances since breaking out on VH1’s Flavor of Love in 2006 that she’s become a kind of meme royalty. Her quips, comebacks and all-around brashness are now the stuff of GIFs and reaction images on any social channel you care to name.

Given her taste for open conflict, though, it’s surprising that one of her most iconic moments touches upon the wisdom of silence. Over a meal, she tells a rival show contestant who made the mistake of wading into her target zone, “You should have just sat there and ate your food.” Sharp and wildly applicable advice. 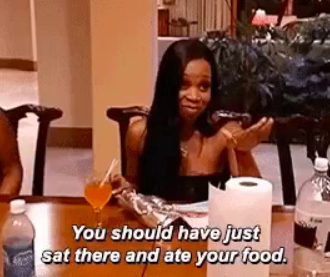 The internet is swarming with people who cannot, to borrow Pollard’s framing, “just sit there and eat their food.” And it’s not always the people you think. At a glance, Donald Trump may strike you as someone who could simply get off Twitter and enjoy lining his pockets as president, but the truth is, Twitter is integral to his brand, his power and his chaotic agenda. He needs to be tweeting through it in order to survive.

No, the ultimate should-just-sit-there-and-eat-her-food character is J.K. Rowling, creator of the Harry Potter universe, whose name trends semi-regularly, and never for a positive reason. Almost always, it’s after she’s done a very bad post.

Above is Rowling’s latest ill-considered foray into the discourse, and it requires a little background. The Maya she stands with is Maya Forstater, formerly a visiting researcher at a U.K. think tank, who had fought that employer’s decision not to renew her contract following the discovery of “her involvement in anti-trans campaigns online,” as Vox reported in a piece detailing the prevalence of transphobia in British culture. The root of Forstater’s belief is that biological sex cannot be changed, and, in particular, “that men cannot change into women.” She tweeted this in arguing against “government proposals to reform the Gender Recognition Act to allow people to self-identify as the opposite sex,” per the Guardian. A judge rejected her legal challenge, noting that she could have easily supported a different set of policies “without insisting on calling transwomen men.”

Rowling then jumped on the story, tepidly supporting choice of gender expression while re-confirming her long-suspected gender essentialism.

So, here we are. But why? What does J.K. Rowling get out of being so loudly wrong? She’s the creator of the most beloved fantasy franchise in the past half-century, and the first author with a net worth in excess of $1 billion. Can she really be concerned, as her friend Maya is, that trans individuals are allowed to enter “changing rooms” and “dormitories” designated for women? By couching their transphobia in terms of protection and equality for women, Rowling and Forstater fall into the despised category of the TERF, or trans-exclusionary radical feminist: They feel the dignity of a trans woman is an attack on the rights, privacy and protections afforded to those they would consider “real” women.

This concern is bogus and immaterial on its face, yet for Rowling, sitting pretty on her 162-acre estate in Scotland, it must be even less than abstract.

No, what encourages Rowling to keep tweeting (often dogshit) takes to her 14.6 million followers is Twitter itself. She has the Poster’s Disease. You should have just sat there and ate your food: This notion is antithetical to her mode of being online, which values political engagement and unfettered speech at all costs. To seize the mantle of a public intellectual, with opinions that count, that have worldwide reach — this duty is far more important than doing the bare minimum to educate herself about whatever issue she finds herself compelled to address.

Rowling has no interest in better understanding the push for trans rights, only in the chance to perform the faux-feminist solidarity she sees as the best and requisite use of a giant platform. The lack of expertise or care, and the damaging consequences of continuing to tweet from the hip anyway, act not as deterrents but perverse incentives to dig a deeper hole. Two other high-profile victims of Poster’s Disease, Elon Musk and Roger Stone, demonstrate that the likelihood of substantial fines, court battles and career disgrace cannot stanch the bleeding.

The very privilege that makes us wonder why Rowling and comparable figures bother to use social media in the first place is, in fact, what makes it so addictive for them. Their worst passing thoughts, whether inane or profoundly toxic, are validated by tens of thousands of people. From this derives an illusion of authority that, to adopt Tiffany Pollard’s formulation once again, means you are unsatisfied to sit there and eat your mountainous plate of food; you also have to instruct the masses how to eat their meager scraps.

Suddenly, you’re defending an obnoxious bigot, seemingly because you were attracted to the nice-sounding hashtag her reactionary allies kicked up. Trans equality is a concept that menaces nobody, and certainly not Joanne Kathleen Rowling, the richest writer on the planet, at her countryside manor, with god knows how many secluded bathrooms to choose from. Perhaps the distance from the action is part of the motive to thrust herself into the culture war, over and over, hoping for sustained relevance, oblivious to her own betrayed fans and secure in her fortune, its ability to insulate her from actual fallout.

Rowling, Forstater and their ilk have presented their backwards cause as a matter of free speech, since they won’t win on the merits of what they’re saying: that employers shouldn’t be able to pass on hiring someone whose prejudices may create “an intimidating, hostile, degrading, humiliating or offensive environment.” That way, when you counter their anti-scientific bullshit, they can accuse you of trying to silence them.

But really, who has the capacity to stop Forstater, let alone Rowling, from spewing whatever hate they want? There comes a time when you’re so consumed with showing that nobody can shut you up that you prove the point with chaotically stupid remarks. Then, of course, they aren’t your posts anymore — you belong to the posts.