Horror’s First Male Scream Queen, What the ‘Stonks’ Meme Tells Us About Investing and Getting Grocery-Ghosted at Trader Joe’s

You know, if it wasn’t for this Joe Longo piece on getting grocery-ghosted by those product-discontinuing bastards at Trader Joe’s, I wouldn’t have known this kind of, let’s be honest, criminal activity even occurs. Why, Joe? Don’t tell me it has anything to do with fragile product pipelines, or oversupply, or even the seasonality of certain ingredients — we all know you’re just a heartless bastard who wants to watch the world burn. Now that I think about it, I do remember I really liked your uncured bacon jam, and haven’t seen that in stores in a while. WHERE’S THE JAM, JOE?

“The High Price of Being the First Male Scream Queen”
C. Brian Smith profiles the life and career of Mark Patton, a closeted gay kid from Missouri, who got his big break when he was cast in the 1985 sequel of A Nightmare on Elm Street. Sadly, that break not only never materialized after Nightmare on Elm Street 2: Freddy’s Revenge flopped, but Patton’s performance — which was roundly mocked by critics and fans alike for “screaming like a girl” — all but ended his acting career. Smith spoke with Patton about the “scream heard ’round the world,” the years since and the link between queerness and the horror genre. READ MORE

Since the terrorist attack at the Gilroy Garlic Festival this past weekend, horrifying images of the violence have flooded the internet, a reaction that has become all too familiar in the wake of mass shootings. Some have argued that seeing the graphic nature of these events is an important part of sensitizing ourselves to them in an effort to affect change. But others wonder if graphic imagery isn’t the very reason why we’re growing more numb.

Could Brad Pitt be the last true white leading man in Hollywood? Miles Klee makes the argument that many of the conditions that used to create marquee megastars like Pitt have begun to unravel. And that’s not a bad thing.

Forgive yourself if you’re unfamiliar with the “stonks” meme, a joke popular with the personal finance crowd that makes fun of the bad financial decision-making and bullshit credentials of the very investors most likely to claim they’re “good with money.” 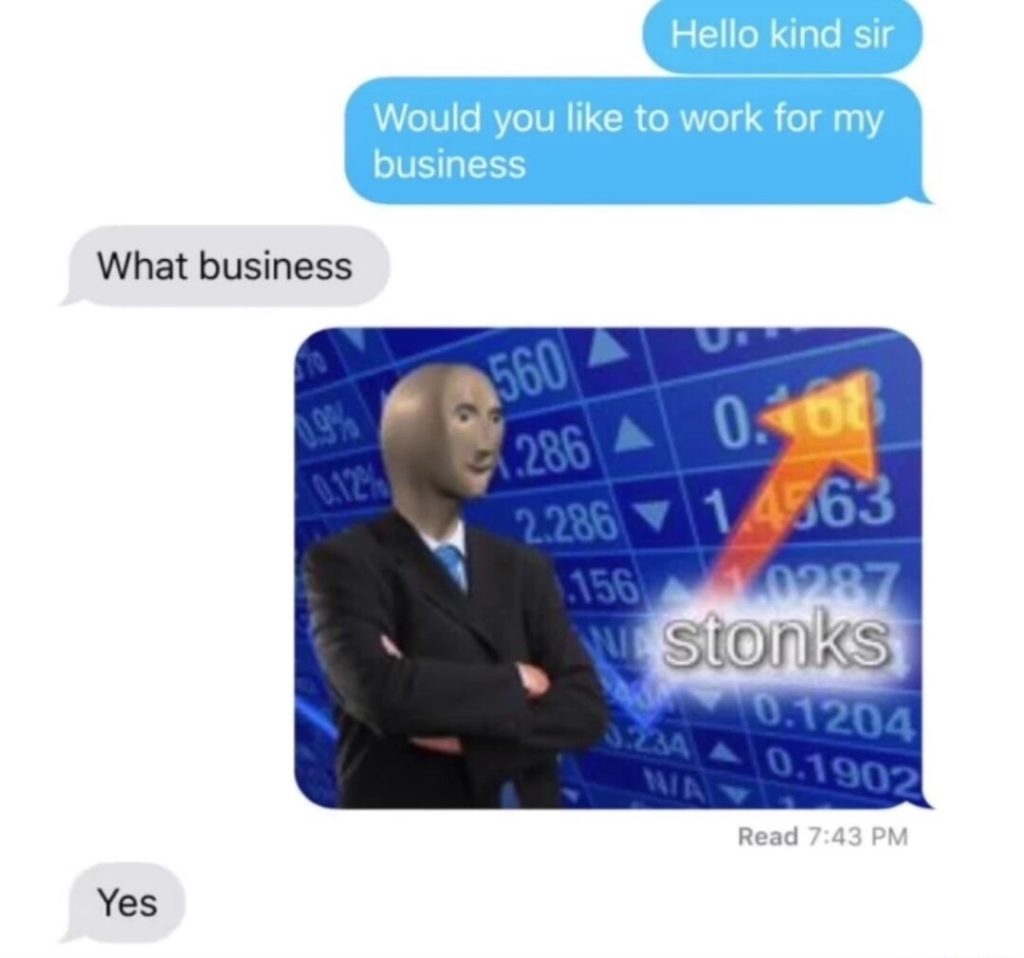 As dumb (and dumb funny) as stonks is, it does highlight a massive problem with our understanding of the market: That when it comes to investing, we’re our own worst enemy.

When it comes to their careers, millennials and Gen Z have clearly chosen to value purpose and personal fulfillment over pensions and job stability like that of older generations — something that’s likely to alter the face not only of workplaces themselves, but of the working class as a whole. In fact, it’s likely the future of America’s largest and most maligned social class will look nothing like their brethren’s past or present.

Everybody loves Trader Joe’s, and how could you not? The tiki, the overly excited cashiers, the incredible array of inventive products that feel tailor-made to delight. But finding the best hot sauce you’ve ever had, your go-to pre-made dinner or the world’s most perfect cheese dip comes at a corresponding price: The constant fear that your favorite product could disappear overnight, and the pain of getting ghosted by your grocery store.

Dick in the Popcorn Trick

So wait — you put your dick in a box of popcorn at a movie theater, and your partner is supposed to find it and jerk you off? Is that how it works? When do you cut a hole in the box? Do you put butter on popcorn? No one actually does this, right?!?!

Tracy Moore has so many questions, and surprisingly, there are plenty of answers.