Or will it merely desensitize us even more to the mass violence that now seems to dominate the news on a daily basis?

It’s a sunny afternoon in the heart of Gilroy, California, and the community is in the midst of its famous garlic festival, held each year as a celebration of the town’s stinky main crop. There are farmers, vendors, food stalls and activities. There’s also live music on a main stage — a video shows a band rolling into the chorus of a song with big blasts of electric guitar.

Then you hear the pops. Rat-tat-tat-tat. Tat-tat-tatatat. For a moment, it sounds like an errant snare drum, or some sort of audio glitch. Pop-pop-pop. But screams begin to ring out, and people begin to run. The band plays for a few more beats, then goes silent. The woman recording the video is wailing, and the image blurs into an abstract mash of lawn, running bodies and screams.

About an hour later, 300 miles away, my phone flashed with a breaking news alert. I was standing in the middle of a concert venue in Downtown L.A., sipping on an overpriced beer while waiting for the show to start. My friend Eve felt her phone buzz, too. We stared at each other for a second. “Jesus Christ, I know people who might be there,” she blurted out.

A series of texts sent over the next few minutes confirmed our loved ones were safe, but our moods had sunk. “Well, once again we know that we’re pretty much waiting to get shot at a place like this, huh?” I muttered, waving my hand toward the stage.

She laughed. “Right? I mean, just let it happen already. This is fucking dumb.”

“At least only like three people or something died,” I offered after a pause.

I gave her a gulp of my beer, and we stood there in the purple glow of the stage lights, reckoning with the tragedy — but only for a moment. Then the concert started, and I stopped caring. By the next morning, the social media cycle was already starting to cool off, even as new info emerged.

The details of the 19-year-old shooter, Santino Legan, were simultaneously horrifying and deeply banal. He was a young white man, described as problematic in the classroom, intrigued with white supremacist theories, who had bought a semi-automatic rifle and vest with military-spec aesthetics. He didn’t discriminate during the shooting, slaying two children and a twentysomething man and hurting dozens of people ranging from adolescents to senior citizens.

It’s been three days since those shots rang out in Gilroy. Vigils have been held, and victims and advocates alike have set up fundraising efforts online. The community is rallying around the motto #GilroyStrong. But the public seems to be mirroring my own disillusionment over another mass shooting in the U.S., too. Google Trends data shows that interest in the search words “Gilroy” and “shooting” reached a peak on Sunday night, then began plummeting right back down to the mean just a day later. 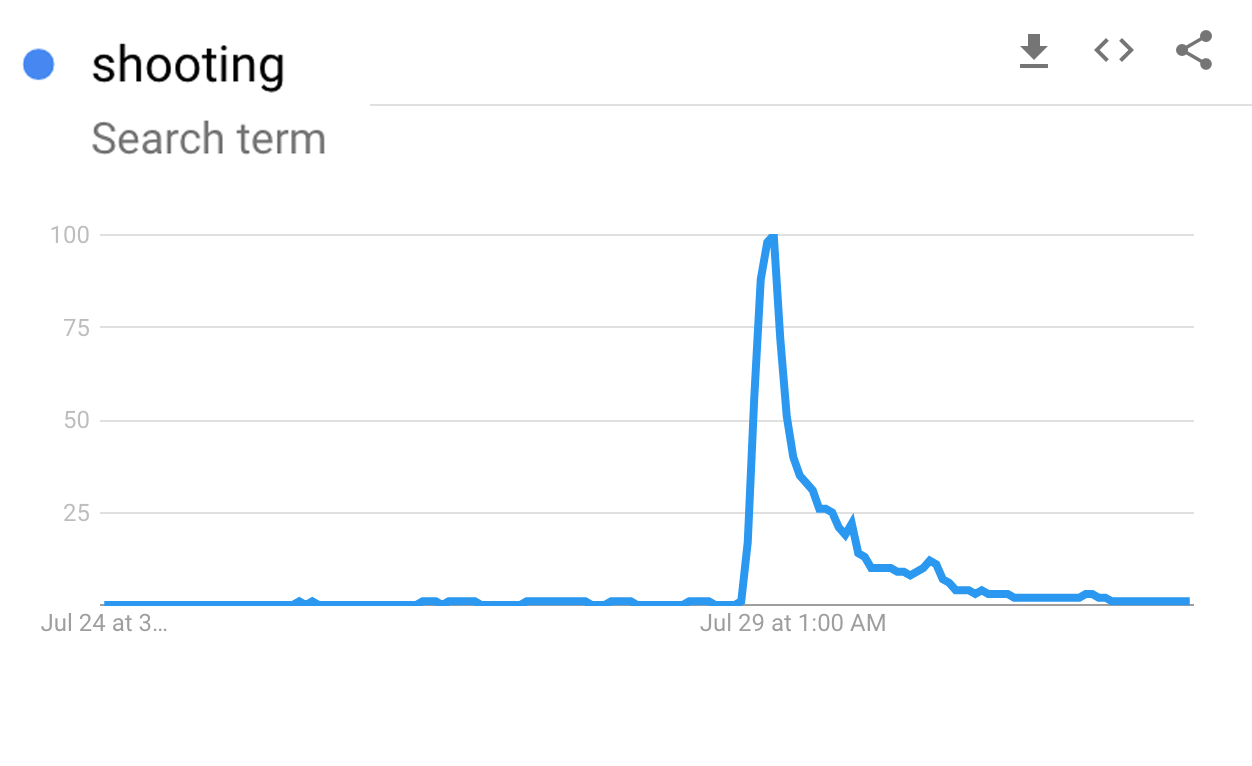 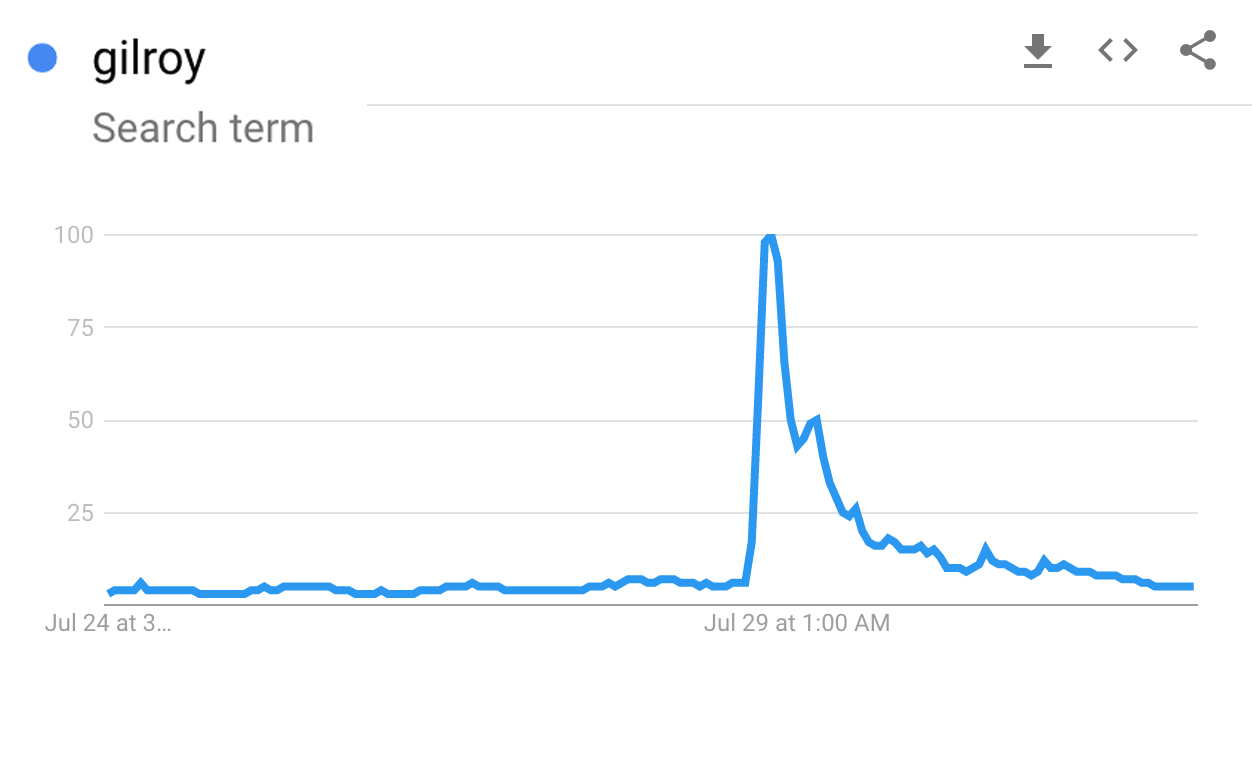 Some tweeted their frustration that a 19-year-old had been able to acquire an AK-47-type rifle, others linked the shooting to the growth of violent white supremacy (the federal investigation hasn’t confirmed a motive, but found materials related to white supremacy and, confusingly, Islam in Legan’s home). But the incident seemed as if it stopped trending on Twitter almost as quickly as it started.

The sinking, almost cruel boredom I felt in the aftermath of the shooting makes sense to Deborah Sweet, a psychologist and founder of the Trauma Counseling Center of Los Angeles. “Frankly, when I hear you talk with language like, ‘Okay, I guess we just need to resign ourselves to being shot,’ that signifies a form of emotional collapse,” she tells me.

The sharp emotions we feel as we process something like a mass shooting is linked to a part of the brain called the amygdala, which acts as a sort of emotional “smoke detector of the brain” and ultimately triggers our fight-or-flight response. Basically then, those who are sensitive and get upset by tragic news can end up stimulating their nervous system in significant ways. “That feeling gets you amped up and makes it hard to go to sleep,” Sweet says.

Overstimulation, meanwhile, can lead to burnout, expressed as resignation or feeling jaded. “If someone stays in that state of anxiety, or overvigiliance, they can crash toward the other extreme where there’s numbness or dissociation from the trauma,” Sweet explains. “Feeling like you’re underreacting or overreacting — that’s the cumulative effect of seeing too much of this in too condensed a time.”

There’s a term mental-health experts use for this phenomenon: Psychic numbing. There’s no constant value for a human life in our eyes, leading psychic numbing researcher Paul Slovic, a psychologist at the University of Oregon, explained to Vox. His research shows that as the number of victims in a tragedy rises, our brains begin to abstract the loss and sever our emotional connection to it. And so, it’s much easier for our brains to focus empathy on a few select individuals, Slovic suggests. “The value of a single life diminishes against the backdrop of a larger tragedy,” he told Vox.

Part of why this numbing happens is obvious: We feel helpless. Active-shooter training programs are more popular than ever, but often leave people feeling more stressed than prepared. Security at festivals, schools and religious centers have gotten more rigorous, but law enforcement experts continue to stress that shootings are challenging to prevent. Witnesses at the Gilroy Garlic Festival noted the use of a pre-entry bag check and metal detectors, and the presence of local police throughout the festival. Indeed, the reaction to the shooting went as planned — cops found the suspect and killed him within just minutes of the first shots.

But nothing could stop Legan from cutting a chain-link fence and sneaking into the festival through the rear. Even California’s restrictive gun laws were no match for Legan simply crossing into Nevada to buy his rifle legally, just two weeks prior to the attack. “No one would associate the Garlic Festival with an attractive target,” retired FBI supervisory agent James Gagliano told CNN. “Even if everyone would’ve gone through a checkpoint, it wouldn’t have stopped this guy from doing what he did.”

There have been efforts to break through our collective numbness, but the efforts haven’t quite stuck. Attempts to change public policy have been especially bleak over the past decade. Earlier this year, the House of Representatives passed the first major federal gun-regulation bill in a generation, but it’s expected to hit huge resistance in the Republican-led Senate. Other state-level policies are gaining support and approval in places like California and New York, but the Gilroy shooting is a prime example of how inconsistent state policies lead to easy loopholes when it comes to obtaining a weapon.

Others have tried to change the dialogue around shootings by highlighting the sheer destruction a bullet can cause relative to other weapons like knives. Medical professionals around the country banded together in November after the National Rifle Association told “anti-gun doctors” to “stay in their lane,” prompting the hashtag campaign #ThisIsOurLane along with stories and brutal images of how gun violence has shaped hospitals.

“Even in a trauma center, a gun wound is an ER-altering situation, where so many staff and resources must be directed to that one patient in that moment,” Marc Futernick, ER medical director at California Hospital in L.A., told me in December. “Imagine all the other patients — those are resources that no one else can get, then. The impact is really basic to see, given an ER is already strained to begin with.”

Then there was #MyLastShot, another online campaign led by Columbine High School students. The crux is a sticker, placed on your ID card, that provides permission for media outlets and other organizations to publicize the image of your dead body after a mass shooting. It’s a thought experiment as much as a literal effort; the thesis is that vivid, explicit images of death might inspire more Americans to advocate for change.

“We were inspired by the graphic imagery of Emmett Till and the movement his mother created by showing the world what had happened to her son by having an open casket at his funeral,” the group states on its website. “#MyLastShot is different from other gun violence prevention campaigns because the organization will not focus on legislation and voting, but rather an opportunity for anyone living in America to start conversations around the horrific realities of gun violence.”

There is a terrible, dark irony in the fact that Till’s memorial gets shot by racists so regularly these days that the next memorial sign has been designed to be bulletproof. And mental health experts are somewhat torn on the positive impact that blood and gore can have on a broad level. Sweet notes that she grew up with the backdrop of the Vietnam War, and remembers how public opinion turned when the masses begin seeing horrifying images from Vietnam and realized the sunny optimism of the U.S. government was riddled with lies. “But they had no idea. It was the first time most people were ever seeing anything like that,” Sweet counters.

These days, it’s possible that doubling down on graphic imagery could backfire, adds Reef Karim, a psychiatrist and human behavioral expert in L.A. The censorship of factual events is a controversial subject, and it’s unclear where the line ought to be, he says. “People who are invested, as a coping strategy, to facilitate change (laws, control, politics) will probably be moved by the visuals and specificity of the violence. But individuals who feel heightened fear with every tragedy will become even more emotionally paralyzed with more exposure to the violence. People who look for blame in an ethnicity, skin color or gender will become even more enraged toward that group. The showing of violence, and the realities of how awful humans can be, sounds like a necessity to some, but we must take into account the emotional effect of how people will take in that information,” he writes over email.

Mass shootings still remain statistically rare, and serve as a tiny piece of the gun-violence pie in America — far more people die each year of suicide, accidents and interpersonal gun violence than they do in a random public venue. But what’s slowly becoming clearer to researchers is that an endless string of mass shootings is having an effect on multiple generations. Studies after 9/11 found that exposure to the destruction of that tragedy led to increased anxiety and mood disorders. What happens then when you keep triggering that feeling, several times a year for 20 years?

I wondered about that the morning after the Gilroy shooting. Mostly, though, my mind fixated on a truly helpless quote from a video taken at the shooting. It seemed to sum up the almost comically absurd situation that the festival attendees had landed in: “Who shootin’ at a garlic festival, bruh?”