‘You’re eating little heaps of saturated fat on depressing carb slices. Give me the buttery crunch of the OG Lunchable cracker any day.’

Among the great pleasures of fatherhood is eating off the kids’ menu again. Which also affords you the opportunity to eat the crap you once loved as a child (like, say, the rat-turd sausage pizza stylings of one Charles E. Cheese) or were forbidden to ever place in your mouth in the first place (for me, pretty much any sugary cereal ever). None of these meal options are good per se; nor is it the nostalgia chaser that makes them palatable. I’d say it’s more of a taboo thing. Like you’re a 40-year-old man actively seeking out the chicken tenders, cheeseburgers and pepperoni pizza designed for the under-10 set. (Or sneaking whatever’s left on your child’s plate onto yours because that keto-friendly dish you ordered doesn’t provide nearly the same amount of joy.) That doesn’t exactly place you on the wild side, but it’s stupid and embarrassing, which brings with it a certain youthful recklessness.

Also, it allows for you to indulge your inner human garbage disposal. And for me at least, those impulses are strong and don’t need much in the way of enticing. Because for as much as I like to think of myself as a foodie who is always looking for a transcendent culinary experience, I’m also not beneath devouring processed crap that I can shove down my throat at light speed. If anything, not doing so is a daily, if not hourly, challenge.

All of which brings me to Brunchables, the latest gastronomic shortcut brought to us by the fine folks behind Lunchables, a staple for my two young children, who mostly eat the cookies and maybe the crackers found therein, leaving me to finish off the small circles of lunch meat as well as the little brick of American cheese (I like to tell myself that I only do so because I hate throwing away food, but that’s bullshit — for all the reasons stated above).

There are essentially three versions of the Brunchable — ham, sausage and bacon. The concept obviously is more or less the same as Lunchables, but of course, breakfast-focused and with flatbread instead of crackers serving as the vessel for all those well-preserved pork varietals. Each is largely inoffensive — though the ashen breakfast sausage is tough on the eyes — and if I’m being honest, something my rum-addled mind and stomach would reach for if they happened to be in the refrigerator and I’d had too much to drink to either 1) operate the stove, and/or 2) wait 15 to 20 minutes for whatever I stuck in the oven to cook through. But I can say without a doubt that they’re also something that my children would immediately dismiss (my 5-year-old son with something probably along the lines of, “That’s disgusting!”). 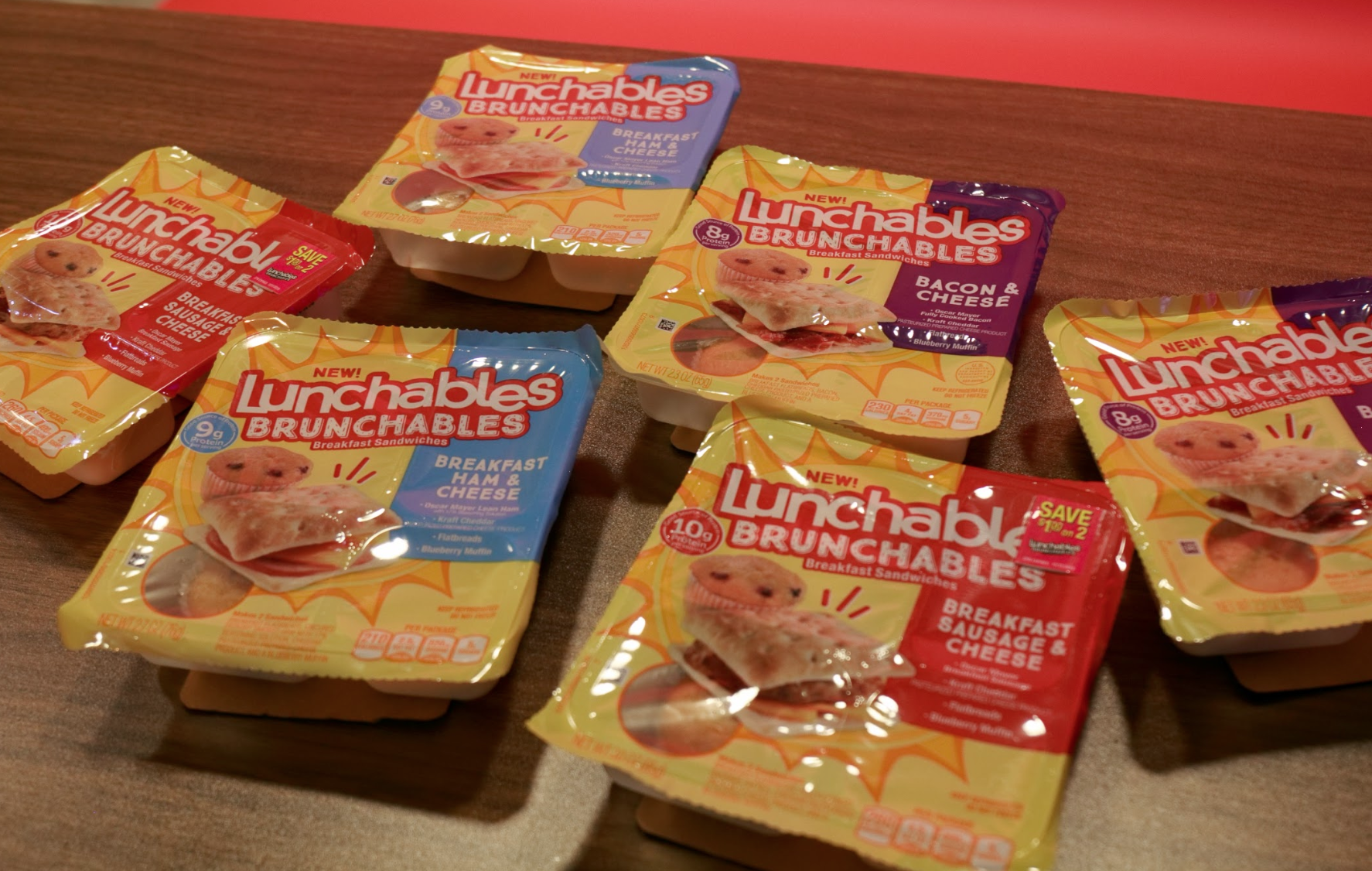 They are too adult — the flatbread something that would freak them out (especially without hummus) and the mini-muffin not nearly sinful enough to attract them the way the Oreos do in a plain ol’ Lunchable. (Speaking of the flatbread, I am neither a marketing genius nor any kind of expert in mass-produced foodstuffs, but it seems to me that a mini-bagel would go a lot further selling the whole brunch concept; and speaking of the mini-muffin, it’s allegedly blueberry but Kraft Heinz, the Brunch/Lunchable overlords, are so stingy with the berries that most of the muffins just look like a minuscule, frosting-less vanilla cupcake.)

Anyway, without that youthful appeal, there’s no appeal to me either. Because eating something my children won’t even touch is just plain sad. In that case, I’m better off going back to my keto staples of kale and cauliflower (rice, fries, pizza) and ideally flipping the script — i.e., hoping to make it look enticing enough for them to follow my lead.

While we’re on the topic of following my lead, I also forced most of the MEL staff to taste-test the trio of Brunchable options — and then write about it afterward. Not to give too much away, but I was probably their biggest fan.

Miles Klee, Staff Writer: My main beef with the Brunchables (Get it? Because they’re all pork-based?) doesn’t concern the highly processed meats. There was a six-year run in childhood where I ate an Oscar Mayer baloney sandwich for lunch every single day, so I’m well-immunized to whatever negative side effects these rubbery foodstuffs may have. The real issue was the super-dry slabs of flatbread, which overwhelmed the ingredients with sheer blandness and have no “brunch” energy whatsoever. Wouldn’t some little croissant buns do the trick?

I don’t think anyone over at Kraft Heinz Co. gave much thought to these snack-meals beyond the name — someone in a meeting said “Brunchables,” and everyone there was just high-fiving each other for the rest of the day. Hard to do brunch, too, without eggs, and the lack of condiments really highlighted the fact that you’re eating little heaps of saturated fat (20 percent of what you can have in a day) on depressing carb-slices. Give me the buttery crunch of the OG Lunchable cracker any day.

Bryan Jones, Designer: The sausage one was best thanks to a recommendation to heat it up, which made the flatbread a little bit more bearable and the melted cheese over the sausage like I was eating a mini-breakfast sandwich from Starbucks.

Tim Grierson, Contributing Editor: You have to microwave them. I don’t understand how anybody could eat these things cold. But apparently, that’s a Brunchable in its natural state — room temperature and lifeless. Who eats this stuff? Is this what parents give their kids? Do kids understand that this isn’t food?

I never had Lunchables, so I have no point of reference for what is, I gather, a beloved, nostalgic item from my colleagues’ childhoods. But apparently, the whole trick of Brunchables is that you get to experience the delight of putting together your own little mini-breakfast sandwich with cheese and either bacon, breakfast ham or breakfast sausage. But making your own sandwich doesn’t add any enjoyment to the experience — specifically because then you have to ponder each sad ingredient of the meal individually. The cheese is a slab. The bacon is tough. The ham is translucent. The flatbread is stiff and dry. The only hope to save this sadness is to nuke the whole thing — at least then you have the advantage of warmth and gooeyness. 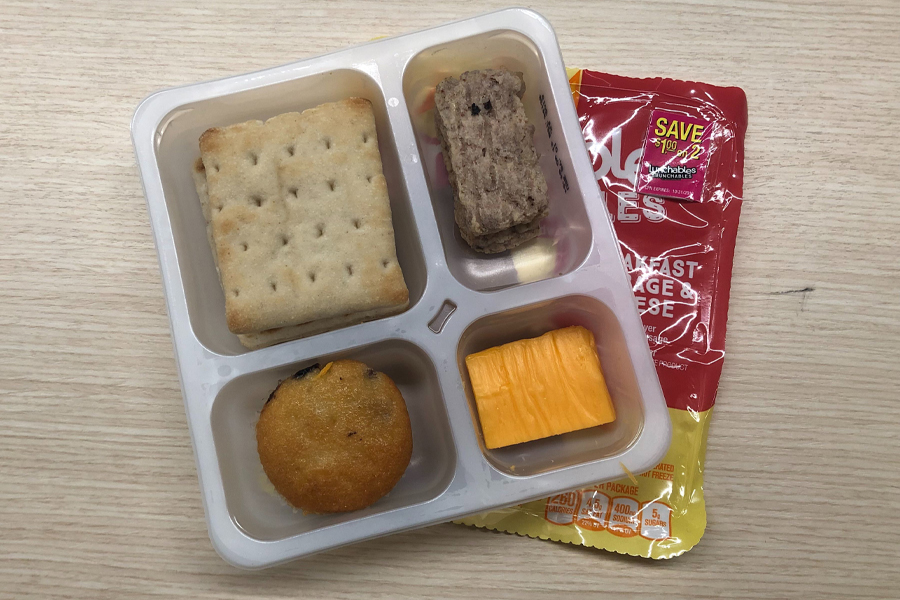 This is probably why only the breakfast-sausage-and-cheese sandwich was decent. After putting it in the microwave, the sandwich tasted sorta like the ones you get at McDonald’s or Starbucks — except so much smaller. Heating it up gives off the impression that you ate something real — it activates the taste somewhat. Also, none of this is like brunch. What kind of brunch are these poor bastards going to that they think this is the way to represent it?

Also, there is a blueberry muffin. It’s tiny. I hated that, too.

Magdalene Taylor, Editorial Assistant: What qualifies as a breakfast sandwich? In my book, it requires an egg. So a sandwich doesn’t become a breakfast sandwich simply because it has bacon on it. The same is true for sausage and ham. Somewhat related: Given that the meat is the core signifier of breakfast in this product and the fact that I don’t eat meat, my meal consisted of two mini slices of cheese overpowered by flatbread. This is no fault of the manufacturers of Lunchables, since it was my choice not to eat the meat they’d intended for it. Still, if the conceptual success of a product hinges upon one element, how strong of a product can it be?

Jeff Gross, Social Media Editor: The Brunchables I tried were all good. That is, if “good” is a Frankenstein’s monster of bland, freezer-burned flatbread, cheese crafted by an artificial intelligence following the Japanese translation of the Ikea instructions to ost (that’s Swedish for cheese) and gray pork product the USDA likely can’t legally call meat. By that measure, yeah, it was good.

But seriously folks, I’m surprised they call this “new” offering Brunchables, because from what I can tell, it really is a Lunchable with the addition of a gumball-sized blueberry muffin, emphasis on the singular. Maybe it’s just been a few decades since I’d trade for the stuff during my elementary school’s lunchtime black market, but when you give me cracker-like bread, glossy cheese and sad deli meat, in most developed countries that’s exactly what it is: Lunch.

If you’re too busy to make your kid some one-minute eggs in the microwave in the morning, by all means, purchase this garbage and watch them smile like it’s manna from heaven. If you don’t mind feeding your loved ones mass-produced processed crap without a hint of nutritional value, please, buy 10. But for the love of God, don’t call this “brunch.” 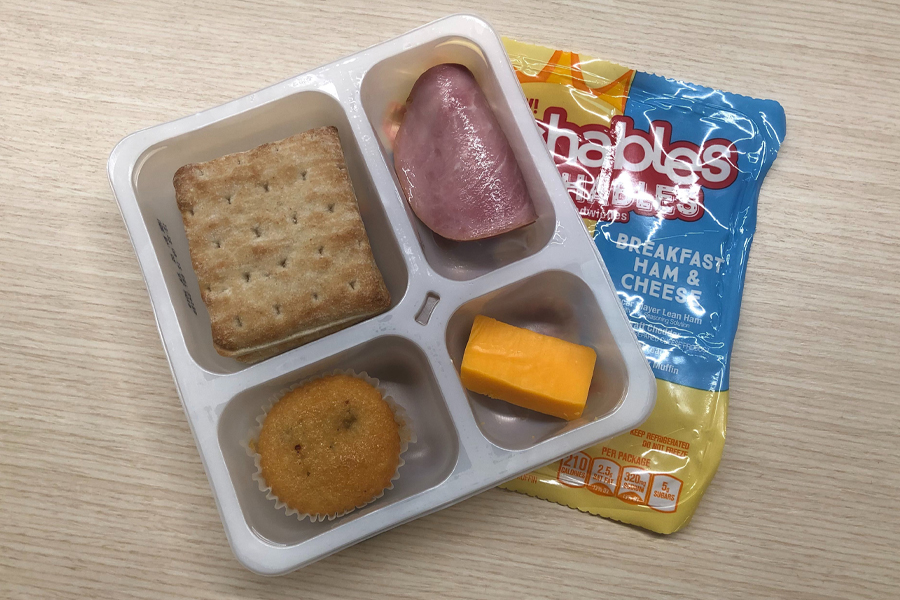 Brian Smith, Staff Writer: I’d never eaten a Lunchable™, so there was no nostalgic element at play when I peeled back the plastic to reveal several squares of “flatbread,” four pieces of “cheese” (which had congealed into one orange hunk) and two rectangles of some sort of meat product — sausage, I’m told — with grill marks suggesting that someone actually stood over a flame broil in the distant past cooking it. I yearned for a carrot — or anything living — that might offset the processed carousel of un-food. Perhaps breaking protocol, I requested my Brunchable™ be warmed up as to at least melt the cheese over the “meat,” which succeeded in making the few bites I had at least resemble a drive-thru Egg McMuffin (sans egg.) The mini “blueberry muffin” — the very last thing I craved after consuming the rest of the empty carbs — was a fitting conclusion to this culinary concavity. I weep for American children.

Ernest Crosby, Video Producer: In 1988, two things happened that would forever change my life: I was given my first Adidas black/white tracksuit (a la Run-DMC), and I was introduced to the best thing to hit a fifth-grade lunch table since Oreos — the Lunchable. Thirty years later, both are still viable products. Though at 40, I’d much rather get an Adidas tracksuit than a lunchable. Still, as a 10-year-old, eating a Lunchable made me look cool as shit, and the Brunchable is about the same. I mean, there was considerable intraoffice interest in where I got the Brunchable from. So for my money, the cool factor is still there.

That said, I’m smarter now. Namely, I recently listened to a podcast about the types of foods we shouldn’t eat, and the takeaway was, “if you can’t pronounce that shit, don’t eat that shit.” So being that the back of the Brunchables box reads like a foreign language, I can’t condone its consumption — no matter how cool it might be (then or now). 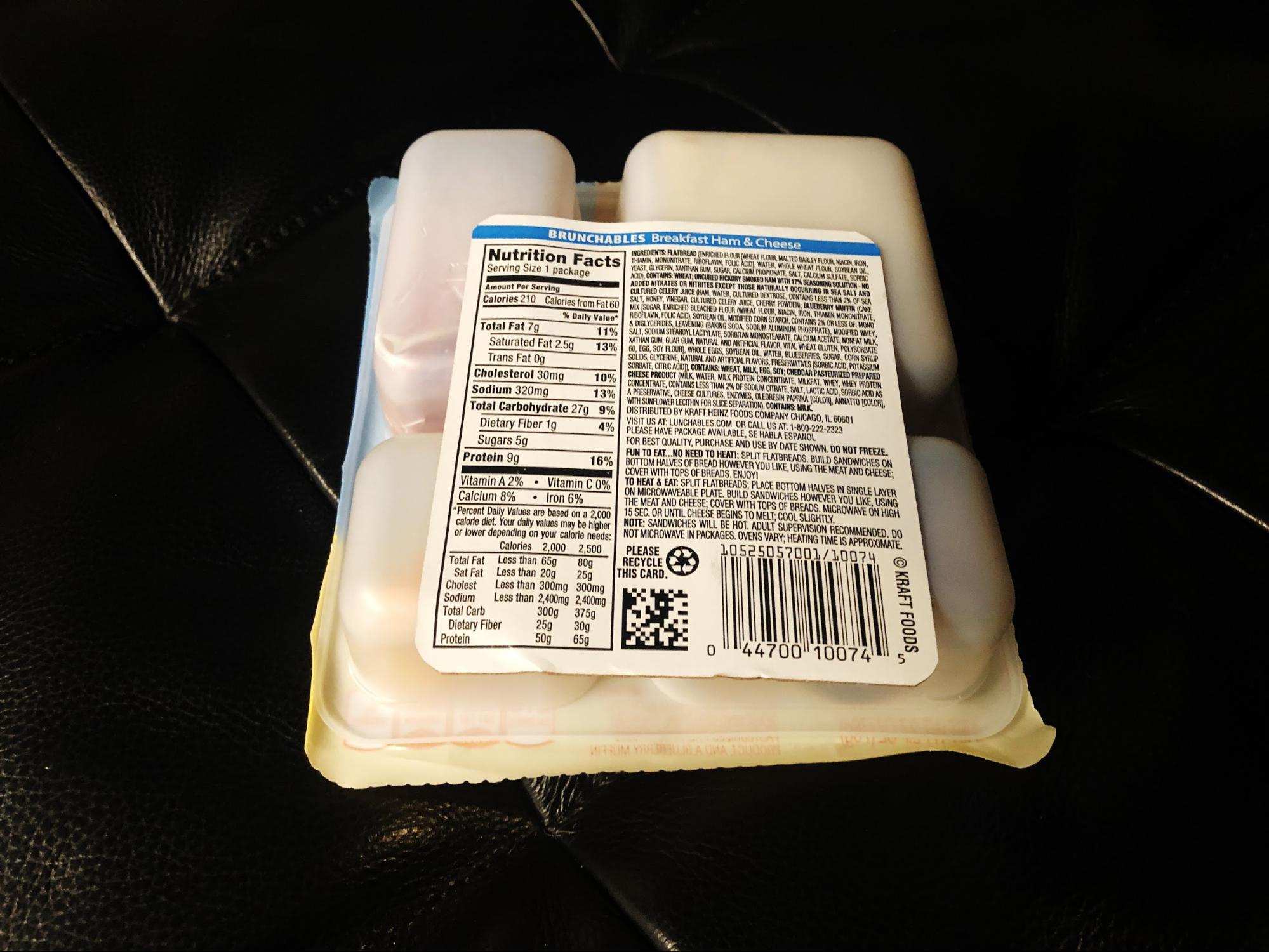 Josh Schollmeyer is the co-founder and editor-in-chief of MEL. Previously, he dreamt up the popular Kinja site Playboy SFW, an effort to bring back the brand’s commitment to social-sexual values (but with a 21st century sensibility), and helped make The Chicagoan, a coffee-table-book like magazine that doubled as a love letter to his hometown and that sold out in under a month. He’s written a bunch of stuff, too, most notably, the best-selling ebook Enemies, A Love Story, about the bromance between dueling film critics Gene Siskel and Roger Ebert. (The Atlantic included it as one of the 10 Best Oral Histories from 2012 You Haven’t Had Time to Read Yet — admittedly, it was very long.) He later served as a producer on the Steve James-directed Ebert documentary, Life Itself, which was short-listed for an Oscar and won an Emmy. He was most recently named to AdWeek’s Creative 100 in the media innovators category, and chosen as a finalist for Digiday’s 2020 Publishing Executive of the Year. In another life, he helped The Bulletin of Atomic Scientists win a National Magazine Award for General Excellence. He is generally the tallest blond of any room he’s in.