Why Everyone Wants a Big Dick Goth Boyfriend

As the Big Tiddy Goth continues her reign as the internet’s unrequited crush, her male counterpart is ready for his close-up

In 2019, my colleague Miles Klee issued a proclamation that every man, woman and adult child has, at some point in their lives, understood to be true: “All of us, in some deep and undeniable way, yearn for the company of a Big Tiddy Goth Girlfriend.”

More than a year later, that’s still the case. Ever since the Big Tiddy Goth Girlfriend was birthed from the bowels of Tumblr in 2014, people have been obsessed with having one, filling the internet with longing memes, tweets and personal ads that pine for her gloomy affection.

But as the Big Tiddy Goth continues her reign as the internet’s most unrequited crush, a burning question has emerged: Does the Big Tiddy Goth Girlfriend have a male counterpart? Where is her Big Dick Goth Boyfriend, and what in the Edgar Allen Poe has he been doing all this time? 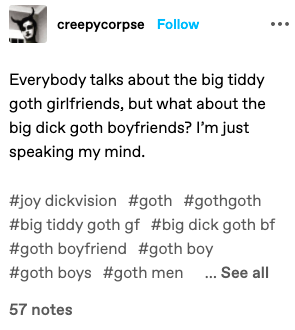 There’s no singular definition of what goth is — and there are many shades of goth one can embody — but according to the very literal website WhatIsGoth.com, the simplest definition is “a person who finds beauty in things others consider dark.” That could mean a lot — rooting for the villains; a morbid preoccupation with death — but to goths, the strongest unifying chord is music. Nihilistic, melancholy, gloomy and emotional, gothic music grew out of the U.K. punk scene in the 1970s and evolved into a unique sound typified by bands like Bauhaus, Siouxsie and the Banshees and The Cure. The culture that surrounds the music — which includes TV, film, literature and fashion — is moody and extravagant, often mixing Victorian and Edwardian influences with horror, fetish and romance. 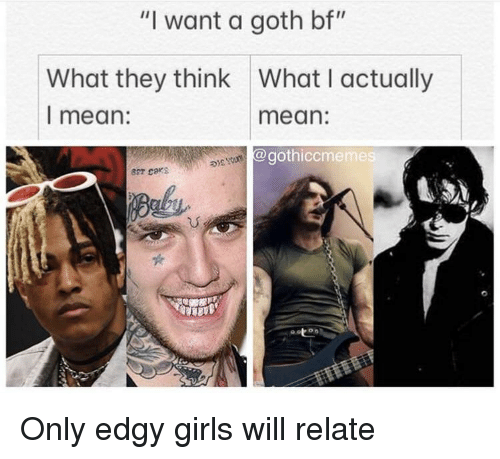 But while goth has been around for decades (and is one of the longest-lasting subcultures we have), the Goth Man seems to be cropping up now more than ever. Suddenly, he’s in your memes. He’s in your tweets. He’s even dicks-out in Playgirl, removed and untouchable, spanning the pages with his hardened Peen of Doom. And while he’s nowhere near as popular as his female counterpart, he doesn’t seem to care. Her massive influence has afforded him a small amount of run-off attention, and, if the increase in memes and conversations around him on Reddit, Twitter and beyond is any indicator, he’s finally stepping into his own.

His “big dick” is only a small part of his story. Beneath the meme’s flashy image of a hulking, black-clad romance lord, there’s a man whose mainstream appeal is growing not just because of his association with the Big Tiddy Girlfriend, but because of the particular brand of “boyfriend” he espouses. Fluid, emotional and generally uninterested in the confines of traditional masculinity, the Big Dick Goth exists not as an opposite to the Goth Girlfriend, but as a parallel; a reflection of our collective readiness for a type of guy who does things differently.

A return to Klee’s analysis puts this into perspective. “She isn’t unfeeling and aloof,” he writes of Goth Girlfriend’s appeal. “In fact, she feels things more profoundly. She is in touch with the vast, icy core of reality, and she has hardened herself against it.” Most men aren’t given the luxury of such emotional depth, but that’s where goth guys differ. In Goth World, most men are allowed to be expressive, soft and romantic; free from the stifling grasp of machismo and the restrictive gender norms that limit who they are. This is particularly true when it comes to clothing; as Dunja Brill describes in her 2009 book “Goth: Gender, Sexuality and Style,” male goths who adopt a traditionally “feminine” look are often seen as more masculine than those who skew butch.

Yet, “manliness” has never been a goth goal. “There’s more to self-empowerment and self-confidence than ‘manning up,’” explains Aytakk, an Australian goth DJ who makes memes and videos about goth culture. “Masculinity can be extremely fragile, and most goth men aren’t bothered by it. We don’t have to be the strongest, toughest or most badass, and goth subculture applies no pressure to do so.”

Biscottino — “little biscuit” in Italian — is 19, bisexual and a self-described “gothic femboy.” He recently got into goth fashion as a way to explore his feminine side, and lately, he’s been posting nudes online under the insignia “Big PP Goth Boyfriend.” A short lurk of his Reddit profile makes it clear why — Little Biscuit is packing big meat.

Despite the feminine accoutrements, there’s nothing definitively gendered about Biscottino or his photos. That, he tells me, is kind of the point. Lestat, a gay 24-year-old who also posts to Reddit as a Big Dick Goth Boyfriend, tends to agree. “I believe all goth things are fully gender-neutral,” he says. “Goth men who indulge in this beautiful aesthetic do something that many men don’t — we have a personal sense of style. We don’t care if our makeup or nail polish might lead to people thinking negatively about us. That alone takes confidence, and confidence is sexy.” 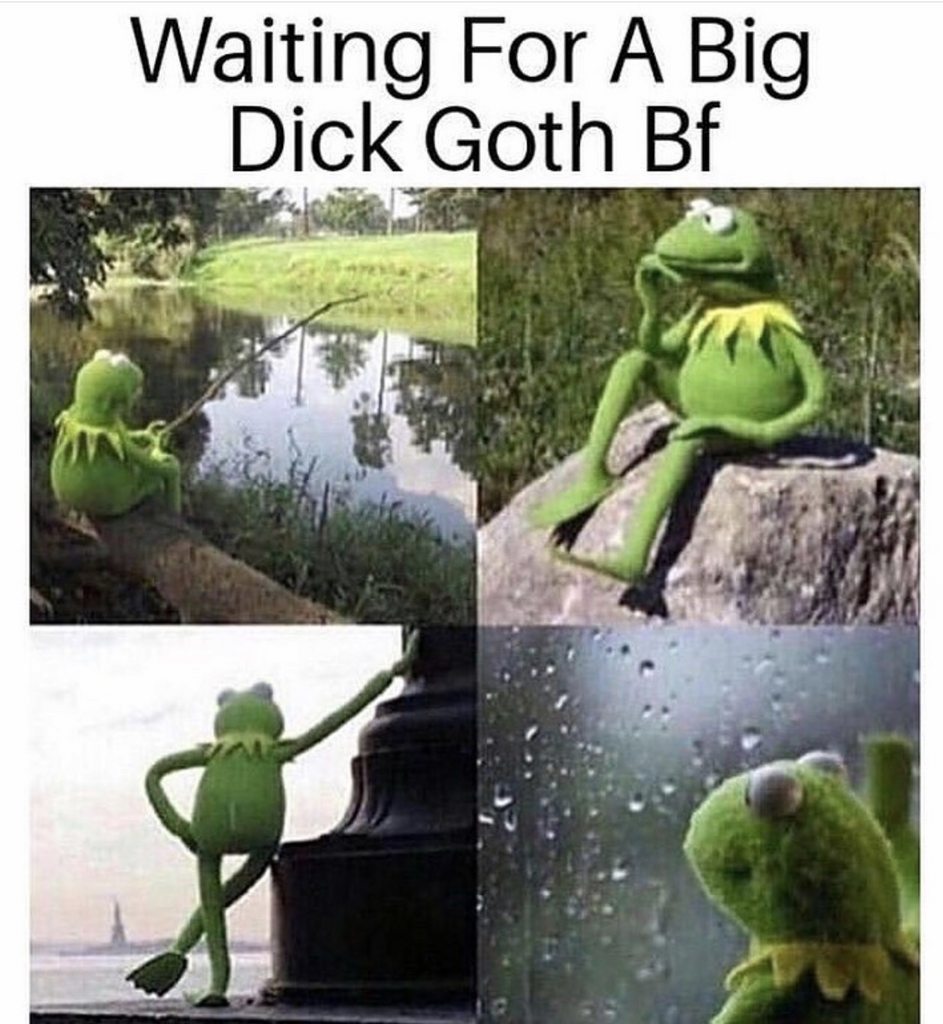 That’s not to say that all goth men are effeminate, androgynous or even progressive. The only “girly” thing about Nick Cave was his impossibly voluminous hair, and Peter Murphy of Bauhaus barely dipped a toe in with his modest guyliner. Even Type O Negative’s legendary Peter Steele — who isn’t actually goth but is constantly conflated with it — was famously cis and heteronormative. Despite generating a reputation as The Quintessential Goth Boyfriend™ with his fully-nude Playgirl spreads, face-melting Jerry Springer appearances and an ever-growing reputation as a groupie magnet, the 6-foot-8, raven-haired Adonis was vocally opposed to having male admirers, and seemed to have more in common with John Wayne than Joy Division.

Jack Havoc, a 36-year-old freelance writer and proud Big Dick Goth, certainly thinks so. “Aside from generally being well-read, intelligent and having killer music taste, goths often have plumbed the depths of their desires in a way that your ‘garden variety’ hot man has not,” he says. “It takes a supreme level of confidence to go against the grain of what’s considered ‘normal,’ and oftentimes, that confidence is borne from an understanding of self that goes beyond simple introspection. In that way, I think goths (of all genders) are more creative and dedicated to fulfilling fantasies and providing pleasure than some other sects of society.”

Throw a hypothetical venti dick in the mix, and the appeal is undeniable. Imagine a dude so secure in his masculinity — or so uncommitted to it — that he tucks his giant cock into a pair of sheer black tights and empties a canister of volumizing hair spray into his mane before popping a Blu-ray of The Crow into your Xbox One. Imagine a man that lets you paint his nails and line his lids with Maybelline Liquid Eyeliner in Black Comet #510, but consoles you with a church organ rendition of “Love Will Tear Us Apart” when it turns out he looks so much better in it than you. Bask in the fantasy of him knowing this has no bearing on his sexuality — but that he’d be open to the experience if it did — and plunge into the deep, dark expanse of his emotions, which he’s written, in a locked diary, using the ink of his own blood. Later on, you’ll kiss under the full moon, the black of his lipstick tinting your mouth with the morbid stain of the undead.

Is that not a refreshing alternative to “u up?” Is that not a slightly more appealing Plan B to guys who worry everything they do is “gay” and readily admit to not wiping their own asses after they dump? Is the Big Dick Goth Boyfriend not just a black-garbed invention — borne out of necessity — that we concocted to save us from the Chads, Kyles and Gregs who have, so far, only grossed us out? 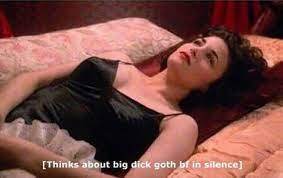 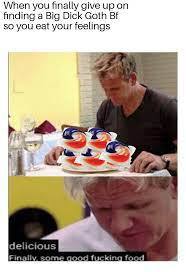 It is — hence the meme — but to actual goths, it’s also a ridiculous fantasy.

“Both the Big Tiddy Goth girlfriend and the Big Dick Goth Boyfriend memes are terrible,” says Aytakk. “The dark, brooding man is a common trope people confuse for goth, and the assumption that all goths are kinky, exotic, easy-to-bed sex addicts is very wrong. It comes down to people lusting after the things they see in the media and assuming that goth has the patent on darkness and spooky.”

As Dani, a nonbinary goth who hosts the goth talk podcast Cemetery Confessions, points out, focusing on the big tiddies and dicks of goths is objectifying. “Mainstream culture (see: cis, white men) tend to create sexualized and abstracted ideas around exotic ‘others’ in order to escape their mundane heteronormativity on a whim,” they say. “Fetishization of goths, whatever the gender, is always from the outside looking in.”

Doing so is also anti-goth. “The individuality-focused aesthetic of goth should allow for the veneration of all types of bodies,” Dani continues. “Taking into consideration the focus of big tits and huge cocks as traditionally patriarchal systems of objectifying and shaming the body, the meme simply doesn’t fit. Something more in line with goth humor and sensibility would perhaps be a ‘Big D(eathhawk) Goth BF,’ ‘Big Cheekbones Goth BF,’ or hell, even ‘Big Tiddy Goth BF.’ ‘Big Dick Goth BF’ is just too… pedestrian.”

At the same time, Aytakk is quick to emphasize that the impact of this fetishization is far greater for goth women than it is for men. “Most men aren’t harassed like women are,” he continues. “But if Big Tiddy Goth Girlfriend is dangerous, then Big Dick Goth Boyfriend is eye-rollingly cringey by comparison. Meanwhile, Non-Binary Goth Other-Friend is ignored.”

The dick does hold weight, though — just not the kind you’d expect. Rather than reflecting any sort of tangible reality or gothic in-joke, our obsession with honkin’ goth cock only serves to illuminate our own insecurities. “People outside goth subculture don’t like seeing goth men as competition,” says Aytakk. “It’s like the only way a goth man can beat Mr. Leghumper to getting the Big Tiddy Goth Girlfriend is if his dick is bigger than theirs.” That’s why he’s gotten so little attention relative to the Goth GF — he’s one of the only guys who won’t disappoint her, so people keep him in the shadows (or so the theory goes).

Even so, there are real Big Dick Goths walking among us, and many, like Biscottino, Lestat and Havoc, don’t mind the increasing attention. Lestat says the Reddit comments he’s been getting lately have made him feel “beautiful,” and Havoc thinks it’s high time for the Big Dick Goth Boyfriend to rise up.

As the meaning of “masculinity” morphs further away from its traditional roots, he just might get his wish.