AKA ‘A Tale of Three Woodys’

I don’t know about you, but I’m sick of hearing about these fucking monoliths. I didn’t understand the monolith in 2001: A Space Odyssey and I don’t understand what all of these monoliths are doing in our own reality right now. The only thing that does make sense to me is that a few hillbillies broke apart that one in Utah and hauled the pieces away in a pickup truck — that’s my understanding of how the universe actually works.

Anyway, I don’t know if these monoliths are a coordinated art exhibit or just some dumb PR stunt, and frankly I don’t care, because our interest in them makes no goddamn sense. Instead, we should all be focused on the original enigmatic erections: giant wooden dicks.

Perhaps you’ve heard a little bit about this in recent days. After all, there has been some “giant wooden dick” news recently, but it seems to get lumped in with the general monolith news and quickly forgotten about in favor of another new — and equally uninteresting — monolith. So, let me catch you up to speed! While I’m sure there are countless wooden dicks out there, there are three important wooden dicks that have made headlines recently, two of which are very mysterious and the third of which is, well, decidedly less mysterious, but I’ll get to that shortly.

The first of these whopping woodys is a six-and-a-half-foot monster that originally appeared five years ago atop Grünten Mountain in Bavaria, Germany. While one story claims that it was part of an elaborate prank among friends, most news outlets have considered its origins a mystery. In the years since, the giant wooden erection has become a tourist attraction for hikers and was even named a cultural landmark by Google Maps.

All was well and good with the dick until November 11th of this year, when German news outlets reported that it had fallen down.

Most likely, the culprit was a cow because, hilariously, cows had regularly used the dick to scratch themselves, and they’d been known to knock it over in the past. One report also said a cow stampede was responsible, but I vastly prefer the image of a cow scratching his back against a giant dick like Baloo in The Jungle Book.

Regardless, the dick was erect again four days later and all seemed back to normal, but on November 28th, the phallus mysteriously went missing and all that was left was a pile of sawdust. That’s right, unknown assailants apparently sawed up the structure into what I can justifiably call literal cock blocks, then hauled the pieces away.

But the saga of the Grünten dick didn’t end there, as a new, slightly bigger dick appeared in its place just three days later. So now, there’s an even taller dick with even bigger balls for hikers to take suggestive photos with and for cows to rub their backs on. Once again, however, its purpose and who is responsible remains a mystery.

Then there’s Austria’s wooden dick, which is even weirder than Germany’s wooden dick. This story begins on October 26, 2016, when a photographer in the Austrian Alps noticed a giant wooden penis at the peak of a mountain, which was, and continues to be, a frequent destination for hikers. This phallus was similar in size to the one in Germany, though lacking any testicles.

Once again, where this wooden monument came from is a mystery, though it’s speculated that an unidentified artist had put it there as a tribute to a fertility cult. What fertility cult, you may be wondering? Well, in a German section of the Alps, a cave named the Hohle Fels was found to have humankind’s oldest known representation of a penis back in 2005, which was dated as about 28,000 years old. Why exactly an old stone dildo means “fertility cult” isn’t exactly clear to me, but it seems that “fertility cult” is often the term thrown around whenever mysterious penises are discovered, as the same thing was said last year when a giant, 2,500-year-old stone penis was found in Sweden.

To stay focused on wooden dicks however, the cock of the Alps proved to be a popular landmark for hikers and Austrian locals alike, but in 2018, it was mysteriously transformed into a bear — a very, very penis-like bear.

Yet in a Pokémon-like evolution of this monument, the crappy penis-bear wasn’t its final form. As of 2020, the alpine penis is a much more convincing bear, even if still a bit phallic in nature. How did this change happen? Again, we don’t know, but how those stupid fucking monoliths went viral and this didn’t is well beyond my understanding.

Finally, I’d like to turn your attention to yet another giant wooden penis, but this one isn’t in Central Europe. Instead, it’s right here in the good ol’ US of A and, I’d argue, it was built for a very American reason. I present to you the “Wilton Woody,” a seven-foot-tall wooden penis carved by an upstate New York man named Jamie Gagne.

The story begins in the summer of last year, when Gagne was building himself a new workshop for his woodworking. He passed inspection for a half-done workshop in July, but he was slammed with a notice to stop work in October, when there was still much of the workshop left to be built. According to his website — which has a much more detailed version of the story — he was told to stop building because of noise violations.

For the next several months, Gagne tried to get the stop order lifted, but the town apparently ignored his request. So, in June, he did what any red-blooded American would do with an axe to grind and a chainsaw handy: He carved a seven-foot wooden penis out of a tree log and put it in his front yard to protest the town government (as well as his neighbor, who keeps calling the cops on him). The big wooden dick got exactly the attention that Gagne wanted, and he received multiple requests from the town to remove it, but, predictably, Gagne refused, citing the First Amendment.

Eventually, Gagne did back down after being arrested over the big wooden penis less than two weeks after he put it up. Now, the “Wilton Woody” — as he named it — resides in his backyard, though, for a while, he left the testicles in his front yard as a symbol of his castrated liberty.

Unfortunately, Gagne never replied to my request for comment, but from what I can gather from his website, as well as his social media posts, his workshop has yet to be completed and he’s now selling custom cutting boards to support his legal battles against the town of Wilton.

As for the Wilton Woody, it was ultimately reunited with its testicles and Gagne shot off some fireworks around it during the Fourth of July. He jokes on his website that he hopes to sell the phallus for $30,000 to get himself out of his legal troubles, though whether or not he has any interested buyers seems unclear. One thing that most certainly is clear, however, is that even the most pettily-devised wooden dick is still far more interesting than any monolith. 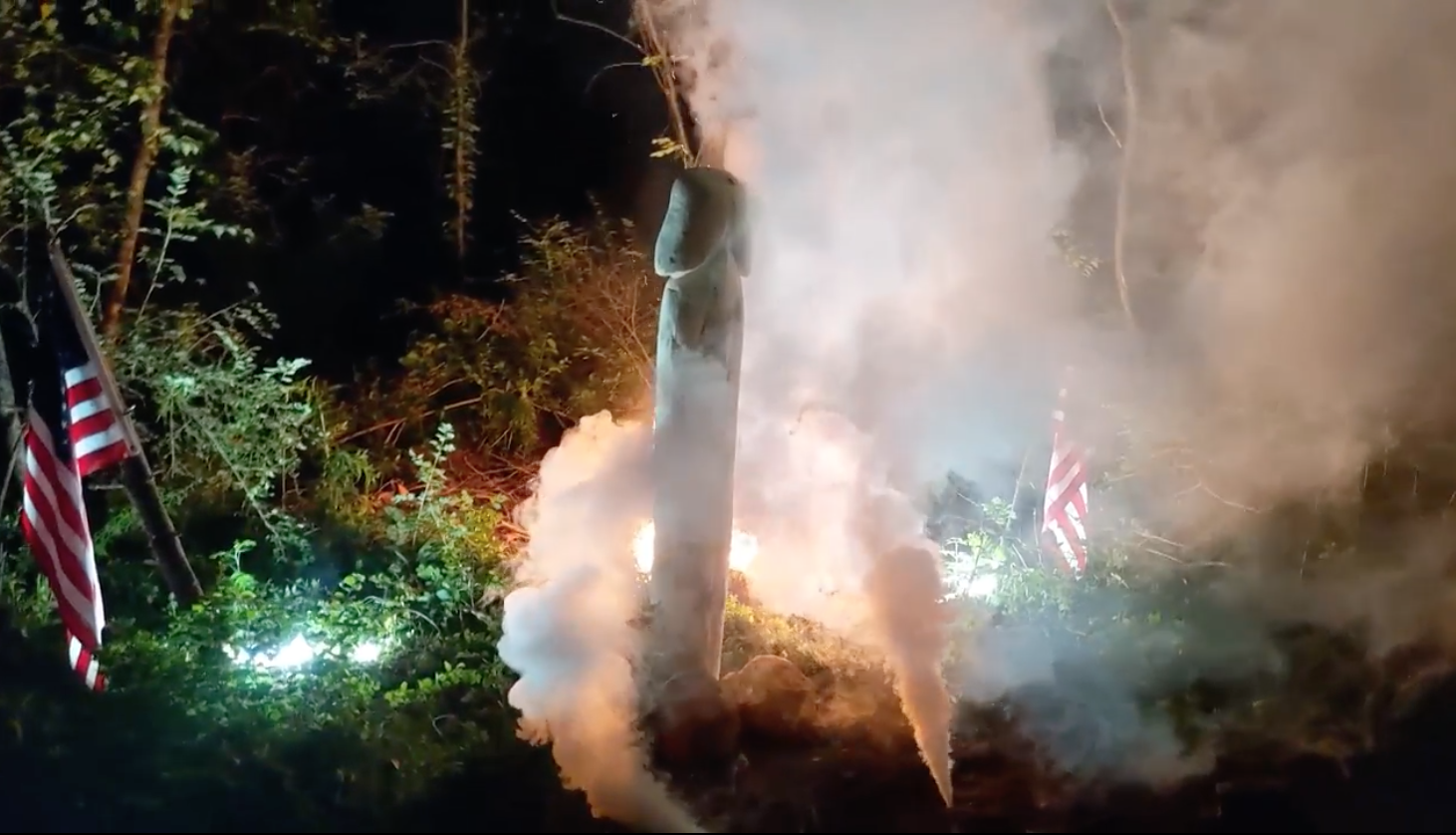