Professional Chefs Tell Us Which Pokémon They’d Cook and Serve

When Blastoise’s fighting years are over, can you kill it, chop off a choice steak from its meaty thigh and sear it with some herbs and butter? Can you pluck a Pidgey, stuff its carcass full of rosemary and garlic, throw it in a slow cooker with potatoes and have a nice pot roast? And can you melt down a Vanillite for a nice vanilla vape sesh?

Yes, humans eat Pokémon. It’s a dark but open secret in the Pokémon universe, like poaching rhinos for their horns. As Gamespot reports, the Pokédex itself lists Farfetch’d as great for meals; Team Rocket talks about scrambling a Togepi; there’s even an instance of humans and  Pokémon sharing a buffet together, perhaps acknowledging the realistic premise of Pokémon eating other Pokémon. Canonically, this question is left wide open. Kotaku once asked one of the show’s creators if the Pokémon were eaten, but he dodged the question, saying, “I’m actually curious about that as well.”

Sure, there are inherent ethical questions around capturing and enslaving an intelligent species for violent human entertainment. But let’s step outside the ethics of the Pokéverse and enter our own, where no one bats an eye at the idea of slaughtering, processing and devouring intelligent animals. Head to Philadelphia or the U.K. and they’ll be dicing up Squirtle and scooping his shell into a boiling pot of broth.

So: Which Pokémon are best for cooking? Which are tastiest — fish, beasts, plants or birds?

I’m still waiting to hear back from the Pokémon’s corporate PR team, but in the meantime I brought this question to a few human chefs in the regular universe to get some professional advice.

Ed Riojas has been a chef for 10 years in Texas and a Pokémon fan since 1995, when he got Pokémon Red for Christmas. He’s bought every single Pokémon game since, he says, and even played Pokémon trading cards competitively for a while. Now he plays Pokémon Go and watches the show with his 5-year-old son.

Another good main course would be a “Miltank-milk-braised Wooloo shank,” Riojas says.

“I recall you can’t go a step without running into a Girafarig,” Unruh adds. “Given their abundance and venison qualities, Cuban spiced Girafarig would be delicious.”

I posed this question to a chef’s-only Facebook group Chef Life, where several chefs were excited to weigh in. “Rabbit is in the pika family, so Pikachu I guess,” says one member.

“Snorlax belly with ginger-soy and cumin,” adds another.

And while I’m not totally sure where Jigglypuff would fit meat-wise, someone says “braised Jigglypuff,” which sounds enticing.

Because Farfetch’d carries around a leek, the duck-like Pokémon was an instant target for many chefs. Many other bird-like Pokémon resemble real-life birds, which makes Pokémon poultry an easy choice.

“Canonically, [Farfetch’d was] almost hunted to extinction because of how delicious they were,” says Catherine Barson Eastis of The Gluttonous Geek, a blog dedicated to recreating recipes from pop culture and video games. “I mean, they’re creatures that carry around their own side dish. In that way, they’re conveniently delicious.”

Easton also offers a variety of “PokéNOM” dishes on The Gluttonous Geek, where she attempts to create these Pokémon dishes, including seared Farfetch’d. 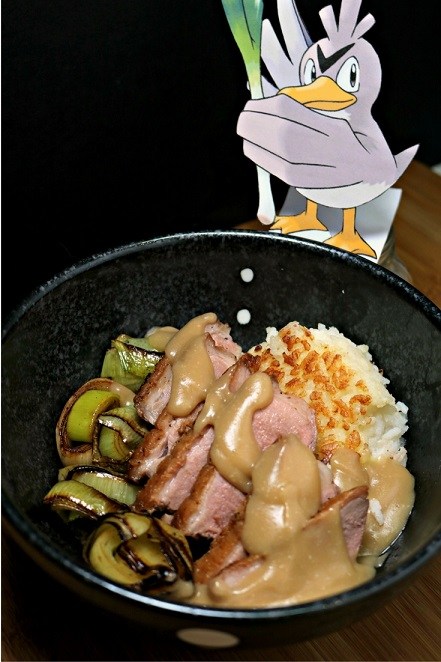 Riojas says he’d cook Farfetch’d too. He “just loves duck, it’s one of my favorites as a huntsman. I’d do him in a ginger-soy marinade and then roasted.”

Jim Mumford, a chef in Michigan, is a “Pokémon diehard since 1998.” “If you doubt me,” he says, “I have a Mewtwo and I’m not afraid to summon it!” Mumford argues that “Pidgey, being fashioned after a large pigeon,” would make a great dish. “While I wouldn’t recommend frying up [a pigeon] from the streets here in America,” he says, “culinarily we know them as squab. Prepare a Pidgey roasted hot, paired with a sweet and tangy cherry gastrique,” he says. “Chef’s kiss.”

Eastis recommends a stuffed Pidgey. For her real-life recreation, she used cornish game hens with a mix of brown rice, sesame seeds and Paras caps (shiitake mushrooms) “before roasting with a raspberry-sesame glaze to give the berry-chomping birds a taste of their own obnoxiousness.”

Rounding out the poultry section of his Pokémon menu, Mumford says, “It doesn’t take a mind reader to see this next dish coming: Psyduck (a psychic duck, obviously) would make world-class duck a l’orange.”

“Just try not to let him know what you’re up to!” he adds.

What about the children’s menu? “To finish it out,” says Unruh, “the very obvious Torchic-ken nuggets would make a great kids’ option.”

Eastis actually made Torchic stuffed-jalapeño poppers. “These adorably tasty fire chickens contain a fire in their belly and come from the Hoenn region, based on Japan’s Kyushu region,” she tells MEL. “That’s why I chose to make the pyromaniac puffballs into some cheese- and jalapeño-stuffed fried Torchic poppers dipped in bird’s-eye-chili-infused soy sauce.”

Of all the Pokémon types, Mumford says, water-type would be “by far the best to eat.”

“No need to deal with any elemental dangers or poisonous bits,” he says. “Magikarp are overabundant pond fish that are, sadly, useless. So treat one like Southerners do a catfish: Bread it, fry it, and serve it with a side of tartar sauce.”

However, John Charles, a line cook in Indiana who describes himself as a “Pokémon master after graduating from the Pokémon University of Kanto,” says Magikarp are inedible. “While you might think they’d be good deep-fried,” Charles says, “in the Pokémon universe they aren’t any good to eat. Team Rocket has tried and failed, if I remember correctly, and even Meowth couldn’t claw through one.”

Either way, there are plenty of fish in the sea, and Mumford’s cooking creativity knows no bounds.

“Who doesn’t love crab chowder?” he begins. “Invented to use tougher crab claws, it’s a great winter’s meal. So if you come across a giant crab with two large claws, like a Krabby, then get the pot on!

“Dratini (short for little dragon) remind me of eels: strong slender animals who grow to over six feet,” Mumford continues. “Filleted and grilled, then prepared in a California roll would do this majestic beast justice. 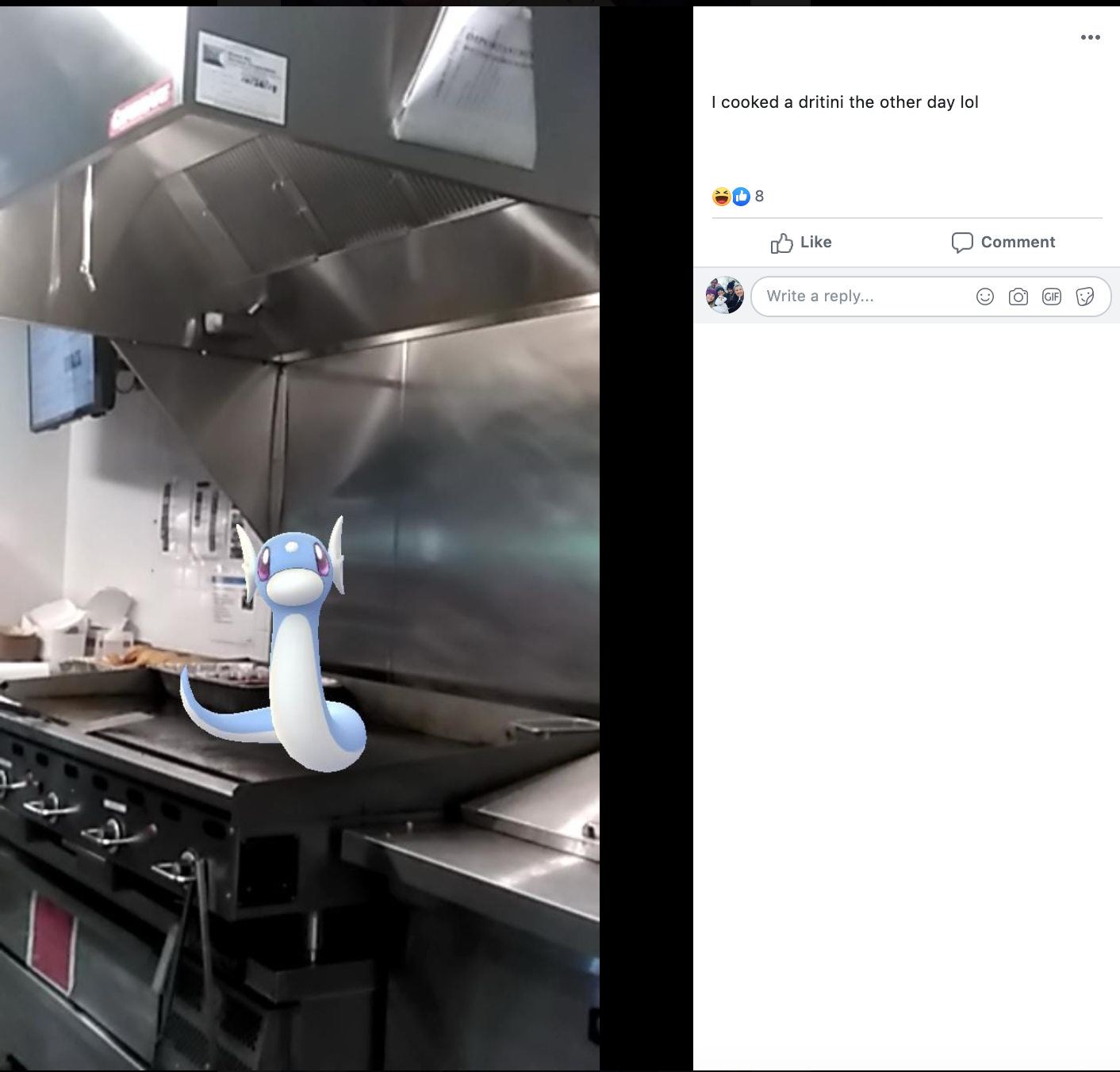 “And listen, I know snails aren’t for everyone. Especially a large 16.5-pound Pokémon like Omanyte. But once it’s braised in burgundy for a few hours and topped with herbs, you won’t care that Omanyte are highly endangered.”

“Finally, who doesn’t love fried calamari rings?” Mumford concludes. “Well, if you came across a Tentacool, you’d be in luck! Just be sure to remove the poisonous body parts before preparing.”

For Unruh, just one water-type Pokémon comes to mind, and that’s a Cloyster. He’d make a “Cloyster fra diavolo, paired with Wartortle soup accented with Bayleef.”

In the Chef Life Facebook group, some chefs suggested a “Corphish with a nice garlic butter sauce” would be tasty, or “flame-grilled Blastoise steaks using Charizard’s flames.”

Considering all Pokémon are living creatures, it’s hard to decide whether vegetable creatures would be considered vegetarian options. “Everything in that world is Pokémon,” Eastis explains. “[So] even vegetarians don’t get a pass. Think of them as delicious snacks housed in hyper-dimensional bento balls.”

I posed this question to Abbey Sharp, a dietitian and YouYuber at Abbey’s Kitchen. After all, what good is flame-grilled Blastoise if it’s unhealthy? Luckily, she humored my request.

“This is a tough one,” she says. But if I can only pick one, I’m going with Caterpie.”

Considering that insects are “now the hot new form of sustainable protein,” the dietitian says, “I would be making a call for the environment by choosing insect protein.”

Eastis took another bug Pokémon, the Paras, and made a few recipes. “[They] look like mushroom-capped crabs, so their legs probably taste like succulent snow-crab meat,” she explains. “That’s why I steamed some Paras legs with sake and served them up with five-spice cheddar biscuits containing their own shrooms (shiitake) and lemongrass-infused butter.”

For the next morning she made “Paras Benedict with the leftovers and served it with lemongrass and mirin hollandaise sauce.” 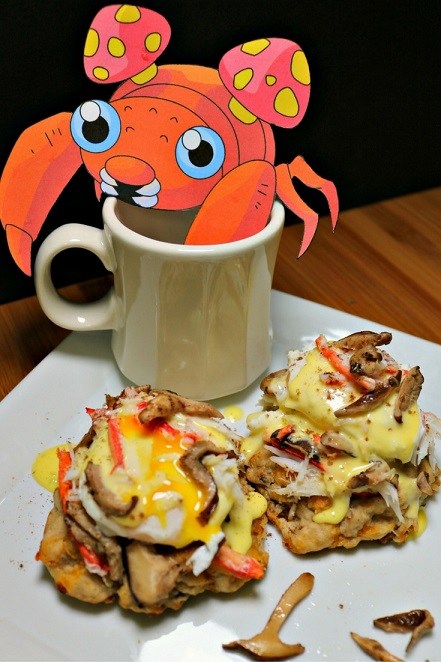 As for which Pokémon to avoid, Sharp says she’d advise staying away from “any of the ‘Poison’ or ‘Electric’ Pokémon for eating as well.” Considering how many people probably died before learning lobsters have to be boiled alive, this is solid advice.

Easits, however, provides a workaround if you’re really hungry for some Bulbasaur. “Bulbasaur is technically also a poison-type Pokémon,” she says, “but I used his greens (spinach and Thai basil) and bulb (pearl onions) to make a delectable crostini. Just avoid his poison sacs and you should be fine.”

And after pleasuring your Alcremie until it produces its creamy discharge, you might crave a post-meal blaze. For that, Mumford suggests diluting a Ghastly and inhaling his smoke. “I’m not saying it would be good for you, but since the gas is analogous to a heavy smoke, I would promise a heavy buzz!”