They call him MuscleBob BuffPants, and I want what he has

“Sponges can get bigger, but they don’t have arms.”

That’s what marine biologist Christopher Mah told me after about 20 minutes of fielding my asinine questions. “Can sponges get swole?” I asked him. “Do sponges have muscles? Are sponges made entirely of muscles?”

After a while, I couldn’t tell if he was getting annoyed with me or if he really thought I was that stupid. He’d be totally justified either way — I’d called for advice on how to get SpongeBob muscles, after all. Lately, I’ve been inundated with gifs and memes of so-called “muscular SpongeBob,” and I wanted to find out how to replicate that physique for myself. 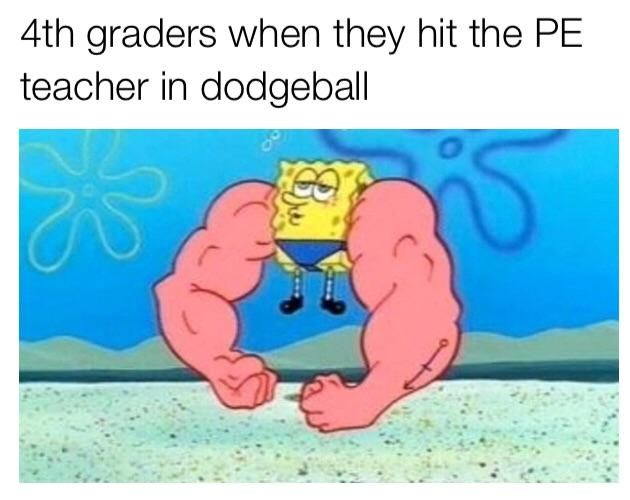 Mah patiently answered every question, and in time, I learned that no, sponges do not have anything resembling muscle tissue. And though sponges do grow throughout their lifetime, you can’t work them out or train them to deadlift.

Needless to say, it was a huge bummer. But where marine biology failed me, powerlifters and fitness experts were more than willing to step in. Together, we went through every different physique SpongeBob has had — and there are several — to find out how I can finally get myself as beefy as him. 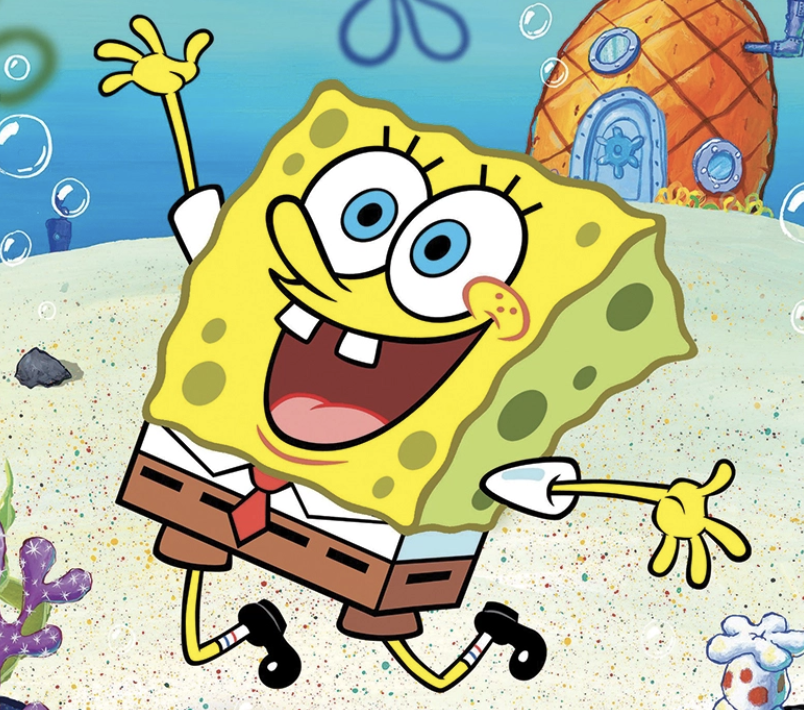 Oliver Lee Bateman, fitness expert and MEL contributing editor: SpongeBob’s regular body is the kind of body you might get working in an office. I mean, you wouldn’t look like a sponge, but the way his arms and legs are really underdeveloped, you can get that from just spending all your time at a desk.

Zack Voase, powerlifter and Illinois record-holder for deadlifting: He definitely doesn’t lift, but he also doesn’t eat a ton and probably has a high metabolic rate. But SpongeBob looks happy here, unlike the rest. Maybe he should just stay this way. 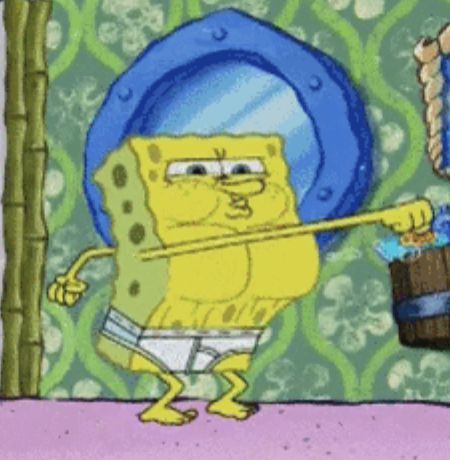 Bateman: He’s in no better shape than that first SpongeBob picture. You see this in real life too when guys suck in their gut or when guys adopt strange walks at the gym to look like they have big shoulders. He’s just trying to get the best pose he can with that body he has.

Richard Valentine, strongman competitor: Why are his ass cheeks in his front?

Bateman: He’s got classic development on the upper body with no work on the lower body at all. SpongeBob is obviously taking steroids here, and he’s doing a lot of curls, bench presses and a lot of high repetition stuff. He’s got a narrow waist so he’s probably not doing a lot of squats because those will thicken your core.

You know, back in the 1980s, a lot of guys had biceps, pectorals and traps that were all overdeveloped while the legs, which are the hardest thing to train, were really underdeveloped. So he’s probably doing a classic 1980s bodybuilder workout to look like this.

Voase: It’s possible to get this body if you used to swim or something where you really capitalize on chest development. He’s obviously neglecting his legs here, because he could get knocked over in a breeze.

Valentine: The only way to look like this is if his legs actually don’t work. Maybe the crab behind him is just holding him up.

Bateman: He’s probably injecting oil into his arms to enlarge them — guys do that. They inject oil into themselves and it inflames the arms and causes something that looks like a tumor to develop. This could also be silicone implants. They’re not functional though — they don’t add any strength. They may even reduce strength because your range of motion is limited and you may get an infection.

Valentine: Bro, why are his arms a different color?

Voase: This is silicone injections. It might be a bit gangrenous too, which is where the red inflammation is coming from. 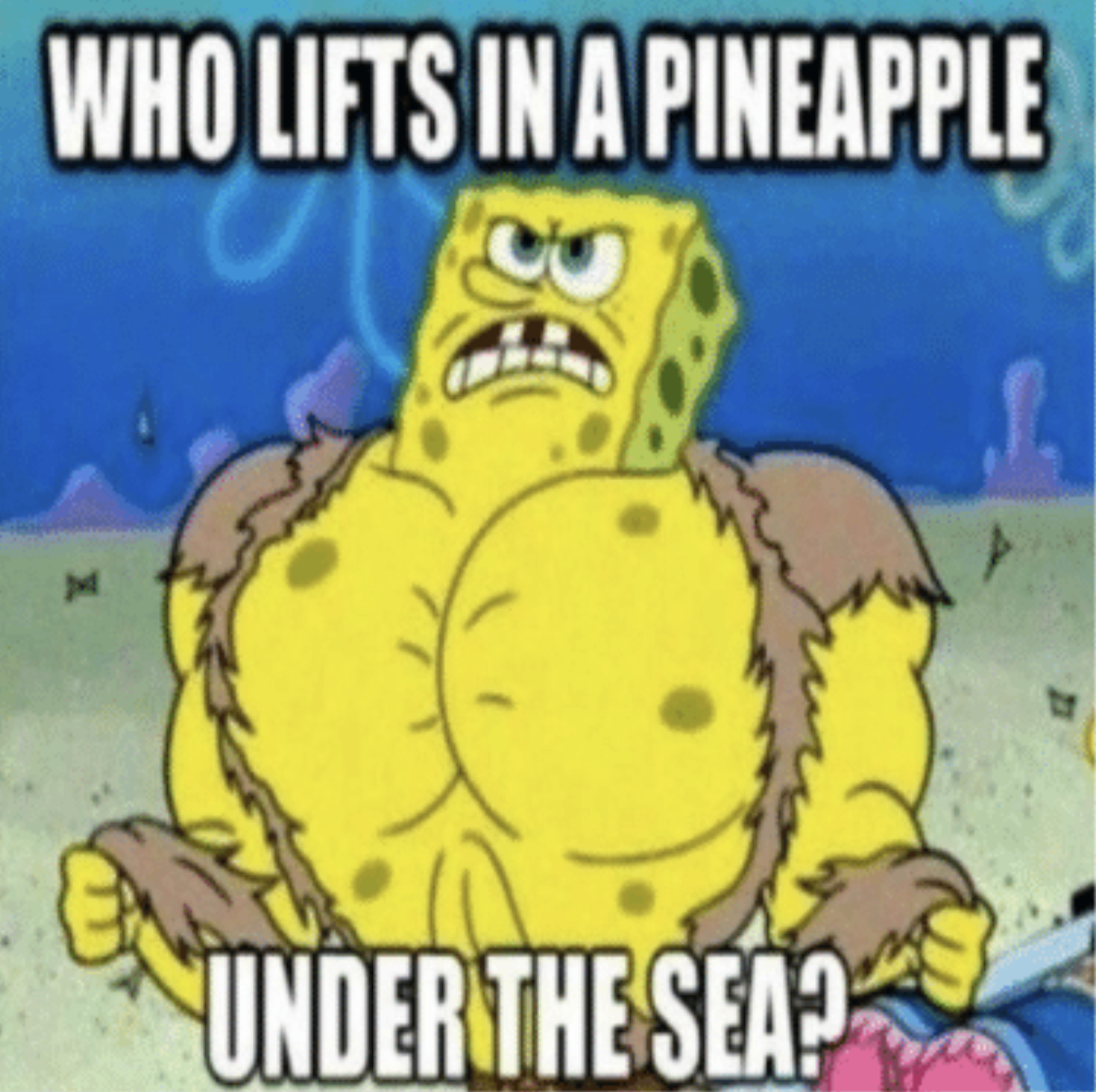 Valentine: Whoa. He’s a big boy. That would take a lot of short-burst reps. But that’ll just fill your muscles with blood and won’t last.

Bateman: This is another bodybuilder workout, but his pecs are so rounded that I think he’s got implants. The line between pecs and breasts is a thin one.

Voase: He’s probably doing a chest day. Not arms, shoulder and chest — just chest. He’s doing flys and stuff with cables and a pec deck. That’s how to get those mommy-milkers he has here. 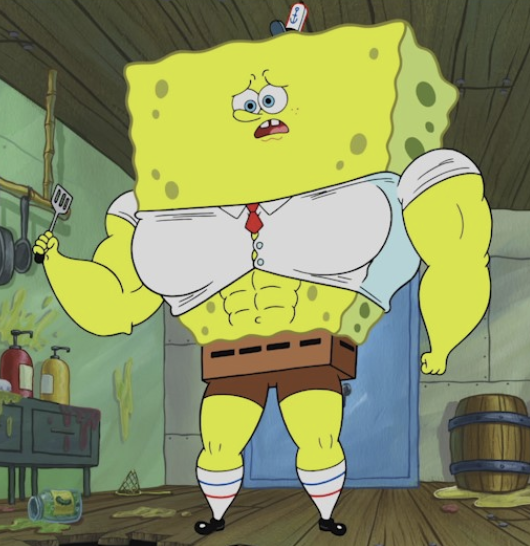 Voase: I would say the tiny hands and feet, eclipsed by the size of the limbs to which they are attached, could be signs of a congenital growth hormone deficiency that he has outworked through sweat and persistence, so good for him. He may also be using the Jawzrsize facial exercise tool to get a head size like that. The large pec development could be a combination of targeted chest exercises and potentially high estrogen levels, as the plumpness could be unchecked breast tissue development. 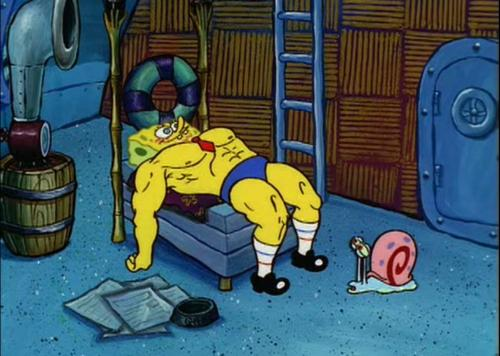 Bateman: He’s clearly training all over here. He’s probably doing some Olympic powerlifting and it’s one of the few images where his legs are really well-developed — his calves are very nicely defined. He also has a thick core, so this is a sponge that’s using all the best training methods. He has the best development here of all these images.

Voase: He looks the most balanced here. He looks like he has a really solid core and his legs are super developed. This looks like he’s doing a full bodybuilding program and he’s hitting his leg day. He looks great. He also looks pretty happy, like he’s proud of himself, which he should be.

Valentine: This is the only one where it doesn’t look like drugs were included. Even the regular SpongeBob, he looks like he’s on drugs, just the wrong kinds of drugs. This one looks natural though. It looks like he has a decent diet and he probably built himself up through standard linear progression training skills, gradually increasing weight as he went along. He also looks like he has regular fluid intake.

Honestly, though, I’ve never watched SpongeBob in my life and I’m really curious about what the fuck just happened in this episode. Did he just finish jerking off in this picture? Did the snail suck him off? What’s going on here?

The Invincibubble from The SpongeBob Movie: Sponge Out of Water 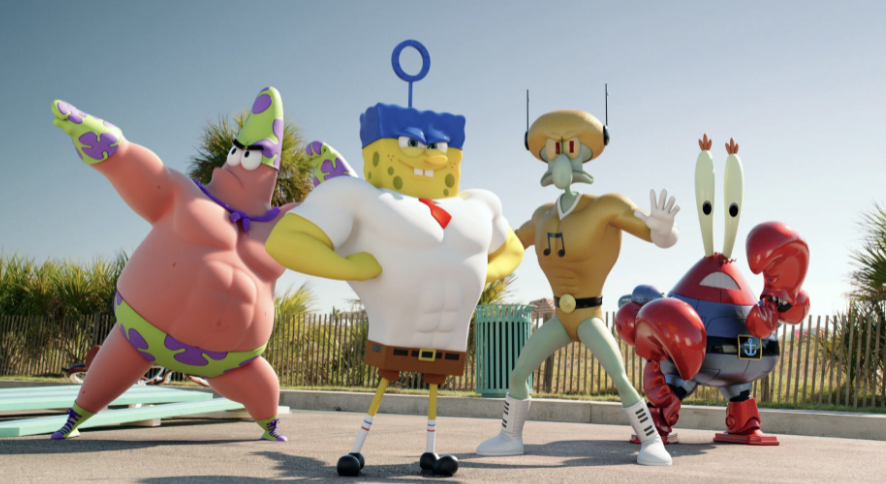 Bateman: SpongeBob has those skinny legs again. You really only get that way if you’ve had a terrible lower body injury — like a car accident — and the legs have really atrophied.

Voase: Something is wrong with SpongeBob’s shirt. Fabric doesn’t shape like that. The texture of his shirt looks like fondant icing on a cake. As for the rest, Squidward looks okay. He has a well-developed chest and back, but his arms and legs are kind of small.

I’m worried about Patrick though. With that belly and the visible abs out front, that’s a sign that someone’s been using HGH injections. The reason for that is because HGH causes your internal organs to grow in size — which causes you to look like you have a belly — but it also pushes the abs out. Or it might be silicone injections. Whatever it is, I’m worried about Patrick.

Valentine: Patrick here eats a fuck-ton and trains a fuck-ton. There’s probably drugs too though, if the muscles are pushing through the fat like that.

Bateman: Your arms can explode in real life. There’s a guy named Gregg Valentino who became famous for having arms that exploded because he kept filling them with oil. Tearing biceps can happen, but with Valentino, his arms actually split open and puss seeped out.

Bateman: There’s no way to do this. You can use oils to shape your arms a bit though. People might already be starting stuff like this.

Voase: We’re talking about full synthetics — injections, implants, etc. But honestly, the only way a man can achieve this kind of body is with cybernetics.

Valentine: Go lift in the water at Chernobyl if you want to look like this.