Is Pinky the Real Genius of ‘Pinky and The Brain’? Their Creator Weighs In

Television shows used to be kept alive simply through reruns and merchandise, but today, fan theories have just as much to do with a show’s continued relevance. Be it the mysterious fate of Scrappy Doo or whether or not the Smurfs are all gay, the showerthoughts of fans that turn into endless Reddit threads are keeping old TV shows alive and well. When it comes to Pinky and The Brain, the duo may be a part of the new Animaniacs revival, but for more than a decade, a single, ongoing theory is mostly why people still talk about it.

That theory, if you haven’t heard, is that Pinky — not The Brain — was the real genius of the two. Because the opening theme somewhat ambiguously states that “one is a genius, the other’s insane,” fans have argued and presented detailed evidence to support this notion. Up until now though, the theory has remained unproven, and while lots of writers and actors and producers had a great deal to do with the success of Pinky and The Brain, one man’s opinion matters above all else: Pinky and The Brain creator Tom Ruegger.

Aware of the ongoing discussion, Ruegger has remarked on the theory before, but he’s never weighed in on all the evidence or rendered a final verdict. So, I dug through the Reddit threads and watched all the YouTube explainers to gather up all the major pieces of evidence to support the theory, then put each of them to Ruegger. Here’s what he had to say…

The theme song to Pinky and the Brain opens with the following lyrics:

This piece of evidence, most likely, is what birthed the theory. Because “Pinky” and “genius” both come first in the theme song and “Brain” and “insane” both come second, the fan theory says that the opening credits are implying that Pinky is really the genius and Brain is the insane one.

Ruegger: Yes, the words in the song are out of order, but there’s no good rhyme with “Brain” that means “idiot,” which is a better word to describe Pinky. When discussing a cartoon though, it’s always important to consider the visuals. The Brain clearly has a large frontal lobe, which indicates that he’s got a big bulging brain in there, so there’s room for some genius thinking. Also, in the original theme song in Animaniacs, when they sing “one is a genius, the other’s insane,” at that point, they walk past an X-Ray machine and you see that The Brain’s got a very involved cranium with machinery working hard in there. Pinky’s brain, however, is an empty void except for the shell of a peanut.

That was in the Animaniacs, but in their own series, when the theme song was expanded, during “one is a genius,” The Brain is doing calculations on a chalkboard while wearing a graduate mortar board on his head. When it gets to “the other’s insane,” Pinky comes hopping by wrapped in a straightjacket. So, visually, that’s probably the most telling evidence regarding the theory. Really, that’s where, I think, this theory gets beat up pretty badly.

It’s often claimed that Einstein once said, “Insanity is doing the same thing over and over again and expecting different results” (he never actually said this). The Pinky and The Brain theory says that, because Brain is doing the same exact thing every night — trying to take over the world — he’s insane, making Pinky, by default, the genius.

Ruegger: You could apply that definition of insanity to The Brain, but he’s also dedicated and resourceful and doesn’t want to give up on his plans. See, The Brain’s goal isn’t to wreak havoc on the planet. He wants to take over the world because he thinks the world needs his leadership. His plans could actually result in a very happy ending for the world. I mean, wouldn’t it be better for the world if The Brain took over?

While The Brain’s plans always fail, in two episodes of Pinky and The Brain, Pinky comes very close to actually conquering the planet. In “Pinky’s Plan,” he invites all the world leaders to a party and then talks them into handing over control of their countries to The Brain. In “Pinky’s Turn,” Pinky creates an Oyster Petting Zoo that eventually becomes so successful that it results in President Bill Clinton appointing Pinky to a cabinet position.

In both of these episodes, Pinky’s plan goes surprisingly well, putting him within reaching distance of global domination. However, when he hands the reins over to The Brain, Brain fumbles and everything falls apart. Additionally, The Brain is often to blame for the failure of his own plans, which is why some fans feel he’s the insane one.

Ruegger: Yes, there are a couple of episodes where The Brain messes up Pinky’s plans, but there are probably dozens of episodes of the opposite, where Pinky ruins The Brain’s plans. When you get into 65 half hours and another 25 shorts before that in Animaniacs, you’re going to run into a lot of episode ideas and a classic episode idea is role reversal. That’s what we were driving at in those two. Also, The Brain’s plans often came very close to succeeding as well, until some plug got pulled or Pinky knocked into something and things suddenly ended. So, The Brain’s gotten very close to succeeding too.

Pinky is Sabotaging All of The Brain’s Plans

While somewhat contradictory to the previous argument, this one says that, because Pinky so often screws up The Brain’s plans, he’s actually a secret genius bent on saving the world from his megalomaniacal best friend.

Ruegger: The idea that Pinky’s there to prevent The Brain from taking over the world seems like too complex a thought for Pinky — it’s too many chess moves ahead for him. Pinky’s plans are really to hang out with Brain, have some fun, do something silly tonight about taking over the world and then get another food pellet.

This piece of evidence states that, when The Brain lays out his plans, Pinky always points out some design flaw, which inevitably proves to be the plan’s undoing.

Ruegger: That was never the intention. I can tell you for sure that we never thought Pinky was secretly a genius in the writer’s room or anything like that. In my head, I was always thinking that Brain was this brilliant genius and that Pinky was a dimwit. 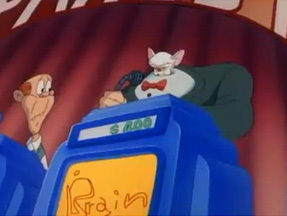 Brain Can Barely Write His Own Name

In an episode where Brain competes on Jeopardy!, his name appears sloppy, which means he’s actually not that smart.

Ruegger: Have you ever gone to the grocery store and had to sign your name on some keypad? That’s how I look at that. He didn’t really give a darn about writing his name neatly, he was just trying to get the money.

Back when Pinky and The Brain was on Kids WB, the network ran a series of educational bumpers during the commercial breaks starring the duo. In one of these “Brain Drain” segments, Pinky is quietly singing the Pinky and The Brain theme song and he adds a few lyrics, saying “that’s me!” after “one is a genius” and “that’s The Brain” after “the other’s insane.”

Ruegger: Anything from that isn’t canon. The only things that are canon are the Animaniacs episodes and the Pinky and The Brain episodes. WB bumpers are really the last thing you want to pay attention to.

Ruegger: Before doing this interview, I was talking to my sons about the theory and they’re very close to the show and they care about it a lot. And my son Cody, who has participated in lots of discussions of the theory and sees the validity in it, told me that to put the kibosh on it isn’t being a good fan. While I’m a fan of Pinky and The Brain, I’m also the creator of Pinky and The Brain, so I know what was intended and, to those fans that think Pinky is a genius, I offer up some of what I’ve said today.

But I don’t really want to dismiss anything. I’m all for fans of Pinky and The Brain getting together and discussing it and having fun with it, so I don’t want to discourage fans from conjecturing, as it’s a fun intellectual exercise. I honestly love the debate and The Brain, certainly, has had some moments of exquisite insanity. Really, when it comes to Pinky and The Brain, they’re a dynamic duo — a true yin and yang — and with that, there is some insanity and genius on both sides.