You may think of Scooby-Doo as an old Saturday morning cartoon character, but the easily spooked Great Dane and his gang of mystery-solving teens have stayed quite busy in the 50 years since the debut of Hanna-Barbera’s Scooby-Doo, Where Are You! in 1969. The brand includes 14 different animated series, 13 comic book runs, two theatrical live-action films (plus at least 30 straight-to-video releases), 21 video games and a handful of stage productions (e.g., in 2020, the live “entertainment spectacular” Scooby-Doo and the Lost City of Gold will embark on a five-year, 30-country global tour). This side of Disney, that’s a solid legacy for a talking dog.

The broad and enduring appeal of the Scooby-verse probably has much to do with the cultural forces that shaped it as anything else. Some argue that the original show was a response to the violence and turmoil seeping through TV sets in the late 1960s; it leaned on classical elements of horror like haunted houses and shadowy monsters but softened them with lighthearted humor and a campy spirit of adventure. Ever since, though, fans and creators have tried to draw out the darker, adult themes or subtext lurking behind the goofy catchphrases. Sometimes this is as simple as rebooting the premise for a comic book like the recent Scooby Apocalypse, where the crew battles mutants created by a world-ending virus (and apparently, not everyone survives).

Elsewhere, it just means people will put their own spin on kid-friendly material. Some of the deeper reads are well-known at this point: Shaggy, who always seems to be very hungry, spaced-out or inappropriately giddy, is taken to be a stoner (over the denials of Scooby creators Joe Ruby and Ken Spears, as well as from actor Matthew Lillard, who has portrayed the character in live-action movies and voiced him for TV). The bookish, bespectacled Velma is possibly a closeted lesbian, with a noticeable crush Daphne, the other woman in the gang.

Even better are the attempts to explain the strange reality in which these paranormal mysteries unfold. One popular Tumblr post suggests that evil magic and monsters are absolutely real in the Scooby-Doo storyline, which is why the villains are able to effectively pose as ghosts and the like in order to advance their nefarious agendas. “The reason why everyone the Mystery Inc. gang encounters believes in the supernatural 100 percent of the time,” the author writes, “is that they have been raised in a society where they are taught to fear monsters from a young age due to long-standing traditions implemented for their safety.” That would up the scare factor.

Other fans have taken a hard look at the economic factors in play. A redditor claims — among more curious ideas about demonology and the occult being the reason why Scooby has the ability to speak — that Velma is orchestrating a parade of fake boogeymen in order to milk a trust fund Daphne was given by her wealthy family, the Blakes: “A simple search of public records and Velma was able to identify the next farm to be foreclosed, recent will grants and land transactions, and easily identify a local who would be willing to don a mask and scare some kids to A) get back at the town and B) increase their own savings courtesy of Mr. Blake.”

Broadening out a bit, some believe that all of Scooby-Doo takes place during a semi-permanent economic depression, thus the many derelict and abandoned settings, as well as the brilliant unemployed antagonists squatting at the sites of failed businesses in the hopes of scamming some cash. As to whether this squares with a theory that has the teens road-tripping up to Canada in order to dodge the Vietnam draft, well, I’ll leave that up to you. Certainly, if that’s the case, they’ve gotten very lost.

And then there’s… this:

But whether you believe every episode is another LSD trip, or that Scooby escaped a Cold War “experimental breeding program that could have produced dogs with greatly enhanced intelligence” in the Soviet Union and continues to be hunted by the CIA or that the entire group suffers from schizophrenia and is actually undergoing an elaborate form of therapy designed to show them that “seemingly supernatural things always have mundane explanations, using repeated demonstration to try and teach them the lesson on an subconscious level,” you’re reenacting the central conceit of the Scooby-Doo pitch: Things are not what they seem.

The franchise’s longevity is in these layers, and its surface-level innocence — its creators’ effort to make something silly and safe for a volatile age — has merely been an invitation to plumb its depths. And amazingly, trying to counter the counterculture with a “debunking” of horror tropes spawned ever more off-the-wall ideas.

The lesson? A little naiveté can give you lots of staying power. You don’t have to think up all the weird angles and twists yourself, as long as you create some room — and plenty of inconsistencies across various media — for the fan base to work with. Oh, and even if you aren’t going to bring drugs in, it seems useful to have one protagonist at least act high. 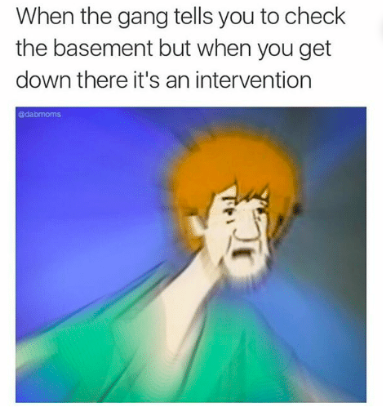