An Oral History of ‘Everything’s Coming Up Milhouse’

With its eternal optimism and endless hilarious applications, the line has fast become the internet’s most victorious meme

Milhouse Van Houten always gets the short end of the stick. His best friend’s dad hates him, the girl he loves barely knows he exists and no less of a dork than Mr. Burns thinks he’s a geek. Even when things are going well for Milhouse, they quickly fall apart, like the time he was cast as Fallout Boy in the Radioactive Man movie, only for the pressures of show business to doom him. But there was one time everything seemed to go right.

It was the day of a great Springfield flood. Homes were destroyed and families were devastated. Yet Milhouse just happened to be wearing his flood pants. When the water seeped into his room, yes, his feet got wet, but his cuffs were bone dry! Truly on top of the world, the boy joyously shouted, “Everything’s coming up Milhouse!”

The moment was a mere cutaway gag in the Season Ten Homer-centric episode “Mom and Pop Art,” but it soon became a favorite among fans because it seemed to define a new and different avenue for the character. Milhouse is Springfield’s eternal loser — a sad sack who’s the butt of countless jokes. In this one horrible moment, however, he finds triumph and celebrates it, pointing to some deeper, perhaps misplaced optimism. It could be naivete, it could be downright stupidity, but maybe it’s much, much more than that.

After all, according to the writer behind the joke, a psychologist and a boatload of Simpsons stans, there might be some real wisdom behind “Everything’s coming up Milhouse.”

This would have been sometime in 1998, during one of the later rewrites of “Mom and Pop Art,” which was an Al Jean script. In the episode, Homer becomes a famous artist, and at the end of it, as an art demonstration, he causes a flood in the town. This is a situation that we’ve found ourselves in before on The Simpsons. Not only was there another flood prior to this, but this is also the type of situation where something is happening to a lot of people in Springfield at once. In that case, the writers look for things to do with the characters — for example, the Sea Captain might be fishing during the flood — everyone’s shtick is going to be applied to that situation.

So, in the rewrite, I’m thinking of different characters to cut to during the flood, and I got to thinking: “Somebody’s going to do something mean to Milhouse. Poor Milhouse.” There are so many pitches just dumping on him and his family — I felt like I had to rescue him from the other writers.

I got to thinking about what they might do to him, and I figured that they’d make fun of his flood pants. Then it occurred to me: His flood pants would actually work in this situation! So I wrote that his flood pants were working. Him yelling “Everything’s coming up Milhouse” just grew as an extension of that impulse to give him a win.

Don Caldwell, internet historian and editor-in-chief of Know Your Meme: The Simpsons is interesting in internet culture because almost any scene that’s memorable has the potential to become a meme. With Milhouse in particular, he’s definitely one of the most prevalent Simpsons characters in meme culture. He’s no Principal Skinner, but Milhouse is big on the internet with things like “Everything’s coming up Milhouse” and “Milhouse is not a meme” — which is this joke about how Milhouse isn’t a meme which, of course, is a meme in itself. 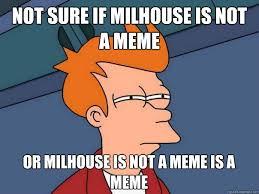 I guess you could say that “Everything’s coming up Milhouse” started as a meme in 2004 when it was posted to Urban Dictionary. Then, in 2011, the “Everything’s Coming Up Milhouse” Tumblr blog was created, and in 2014, BuzzFeed published a compilation of tweets referencing the quote. It’s been used pretty regularly since 2011.

Greaney: Five or so years after the episode, I started to realize that people had gotten tattoos of this, and there were these very talented women who wrote a song about it. It was extremely gratifying because this was really sincere to me. Some pitches you’re just trying to get a laugh, but I really wanted Milhouse to have a win. 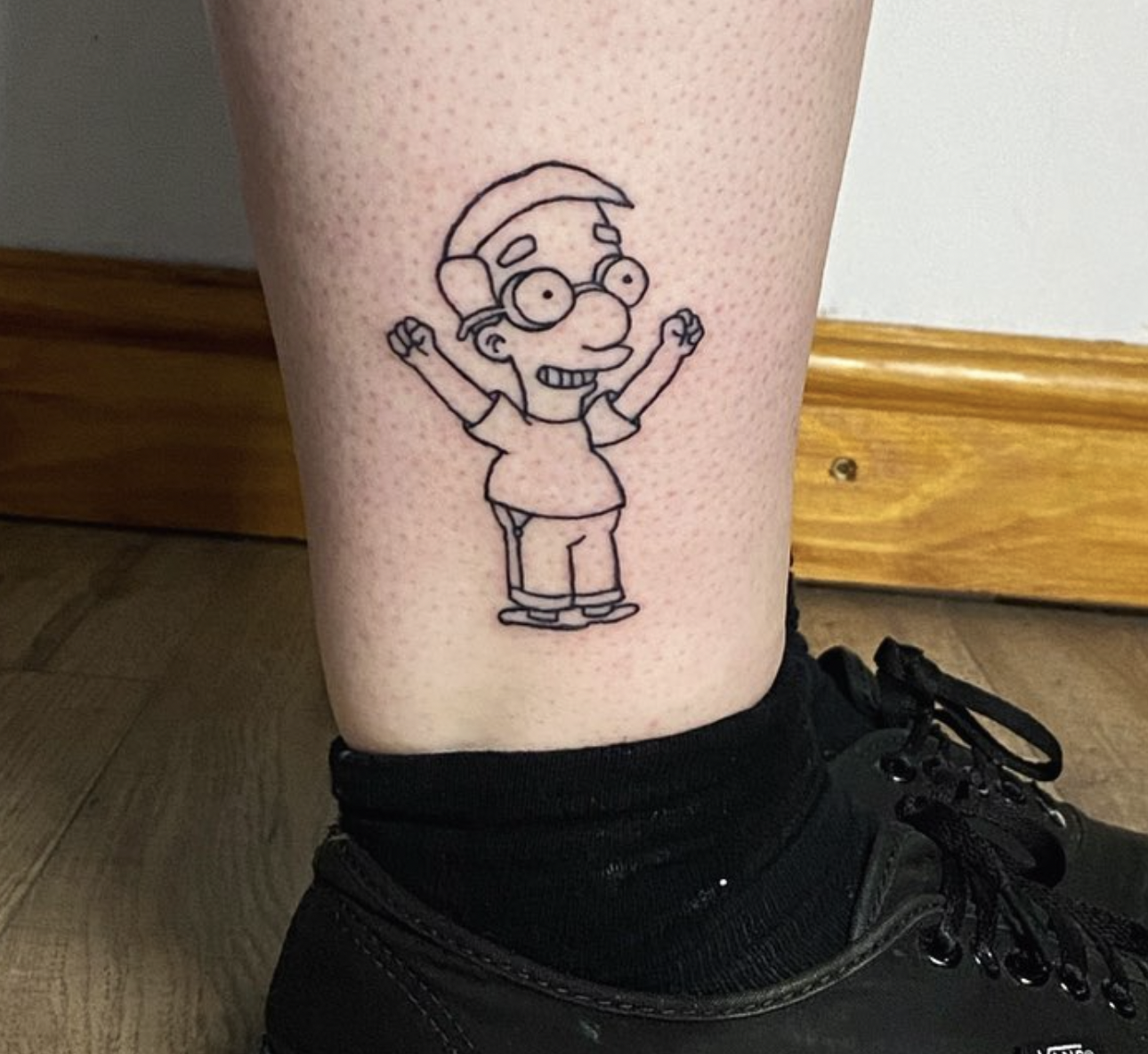 Alice, who has an “Everything’s Coming Up Milhouse” tattoo by tattooist Simon Devenport: I had a few tattoos and none of them really meant much, but two months ago, I got my Milhouse tattoo because, no matter how awful things can be, there’s always something small to be grateful for. It’s a really sweet message.

Allie Goertz, writer and musician, singer and songwriter of “Everything’s Coming Up Milhouse”: Milhouse is one of my favorite Simpsons characters, and the phrase “Everything’s coming up Milhouse” is so incredibly funny. It’s a saying that can be used in everyday life, but I wanted to do it with irony and take that delighted term and make it into a story about how Milhouse is very sad and pathetic.

Greaney: To be honest, I slightly take issue with the song because the song re-reverses it and makes Milhouse a sad loser again. We know that already. For me, I would have had it sad in the beginning, but then there would have been a win for him — however small.

Yes, there’s an irony to it, because maybe it’s not something worth celebrating, but the celebration itself is sincere. It’s a real win. I think of it like, when I look in the spice cupboard and I actually have what I’m looking for. A lot of people identify with Milhouse — I do, and I think a lot of The Simpsons writers do — so let him have the win.

Daniel Lavery, author of “The Eternal Chump: Everything’s Coming Up Milhouse”: Milhouse is that kid who hangs out with another kid and nobody really understands why. Do he and Bart make sense together as friends? Who knows, but they’re 10, and a lot of friendships are born out of simple proximity at that age. Milhouse is also just weird in a way that many real 10-year-olds are weird. His weirdness has a lot of layers. He’s the eternal schlemiel, yet he’s also weirdly optimistic; he’s friendly, yet he can really hold a grudge — that’s a weird kid, but a lot of people feel that they’re weird like that.

Neil Arsenty, who runs On This Day in Simpsons History on Twitter: A lot of people relate to Milhouse. They have their insecurities and they feel like they’re unlucky, yet they still try to stay optimistic, which is pretty inspiring.

Caldwell: “Everything’s coming up Milhouse” is unique in that it’s actually a positive meme, which is different from much of the internet, which can be this snarky, cynical place. There’s a whole thing in self-help and positivity training about constantly being grateful for what you have, and this is kind of like that.

Dr. Philip Mazzocco, professor of psychology and author of “Self-Esteem in Springfield: Self and Identity in the Land of D’oh” from the book The Psychology of the Simpsons: D’oh!: There is research in motivation and goal-seeking behavior that says that if you have a big goal, it’s important to celebrate instrumental goals along the way. So celebrating the small things can be very useful.

In Milhouse’s case, it’s not really a significant triumph, but it’s impressive because things generally don’t go well for Milhouse. He’s like Charlie Brown in a way, but not so lovable. You don’t really root for Milhouse because he’s kind of a sad sack — there’s a certain kind of schadenfreude we get out of Milhouse where watching him suffer brings us joy.

Milhouse also seems to know this. He seems to have some sense of meta-consciousness where he knows that this is his role in the show and in life. He’s the sad-sack foil to Bart, and on some level, he knows, “I’m not going to get many victories in this life, so I’m going to celebrate the few that I do.”