Ken Has Once Again Found His True Calling — Unambitious Himbo

Once in pursuit of his own glory, Ken has decided to kick back and let Barbie have the spotlight, and that’s just how we like him

For more than a year now, I’ve been on the hunt for one of the most famous men in America — Barbie’s boyfriend Ken, who I’ve been searching for on behalf of my six-year-old daughter. I thought it would be easy to find him, but everywhere I go I see lots of other dudes in Barbie packaging, but not one who resembles the ascot-wearing, fashion-obsessed dude from Toy Story 3, which, of course, is the kind of Ken my daughter wants.

While I could have ordered it online long ago, I’ve refrained from doing so because the toy collector in me enjoys the IRL hunt. But having been repeatedly unsuccessful, I finally caved and looked him up online. That was when I realized that Ken is still well-stocked at Target, Walmart and the rest of the big box stores, but he no longer looks like the guy in Toy Story 3. As it turns out, Mattel decided to make a change to its lineup in 2017, introducing a diverse array of Ken dolls with different skin tones, body types and fashion senses.

In the past, these kinds of characters would generally be considered “friends” in the Barbie universe. But today, all of these dudes are Ken, which is Mattel’s way of ensuring that diversity isn’t just relegated to secondary characters. They did the same thing with Barbie a year earlier, when they made headlines for giving her a variety of body types as well as a more diverse array of skin tones.

These changes echo one from decades earlier. As Michelle Parnett-Dwyer, a curator from The Strong National Museum of Play, explains, “Back in 1979, they debuted the first Black Barbie. Barbie had Black friends prior to that, but that was when they finally had a doll named Barbie that had that complexion.” A couple of years later, a Black Ken was introduced, and for the next few decades, most Ken dolls would be available in both white and Black iterations. Thus, the 2017 change just represents Mattel’s latest step towards ensuring inclusivity.

But while all of this change for Ken is obviously good, I noticed something else about this new lineup, too. Though his diversity has grown, Ken’s career prospects have dwindled significantly. You can currently find Barbie dolls that are astronauts, firefighters, veterinarians, pediatricians, pop stars and chefs, but as for Ken? He doesn’t do a whole lot.

On Walmart’s website, current Ken doll career paths are pretty much limited to lifeguard, surfer, barista and, for whatever reason, dentist. I don’t wish to denigrate any of those professions — except for dentists, who, of course, everyone hates — but it does seem like modern Ken’s options are limited. In the past, he’s been a doctor, an Olympic skier and a Vanilla-Ice inspired rapper, but these days he mostly seems to be a beach bum. Funny enough, this closely resembles the original Ken doll from 1961, who debuted with just a towel, swim trunks and some sandals. 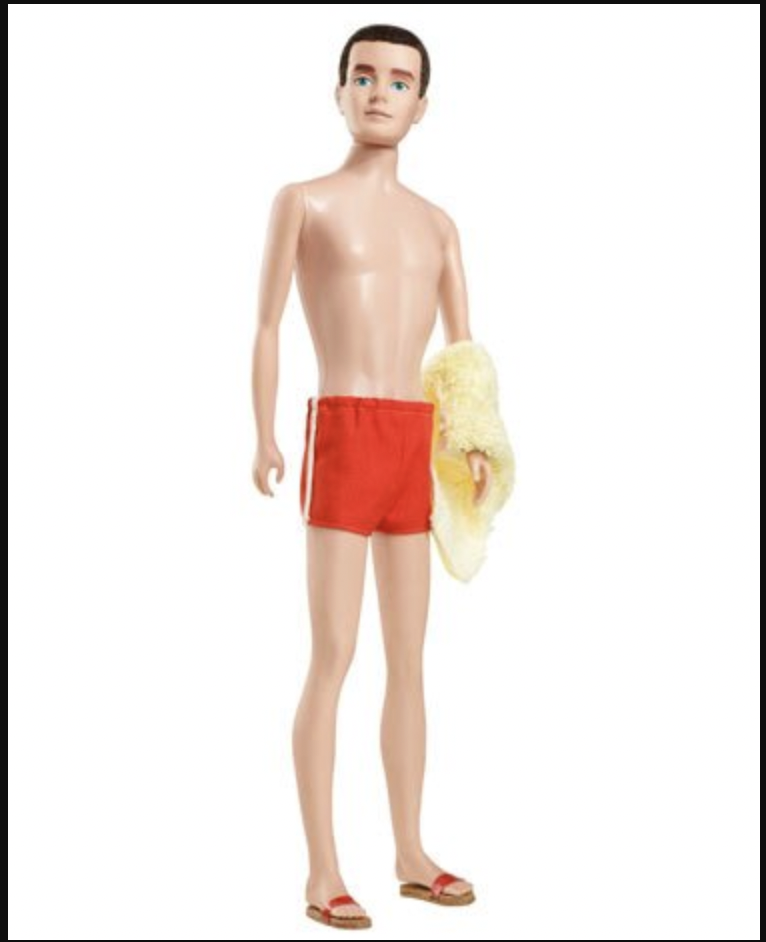 Despite a bit of formalwear here and there, Ken mostly stayed like this throughout the 1960s, which was a completely intentional move on behalf of Mattel. “In the mid-1960s, the women’s movement began and all of the women at Mattel were members of NOW [the National Organization for Women], but we didn’t push it. We didn’t talk about it,” says Dressing Barbie author Carol Spencer, who spent 35 years with Mattel designing Barbie and Ken dolls.

Instead, they pushed things forward in subtler ways, through the very dolls they were creating. “When I graduated from high school in 1950, there were only a few careers for women, but men could do anything,” says Spencer, who explains that, at the time, women were mostly expected to be nurses, teachers or stay-at-home moms. But as U.S. News & World Report explains, “In the 1960s, deep cultural changes were altering the role of women in American society. More females than ever were entering the paid workforce, and this increased the dissatisfaction among women regarding huge gender disparities in pay and advancement.”

As for Spencer and the rest of the women making Barbies — and they were all women back then — they became part of that cultural shift. By giving girls bigger goals for their future, they furthered the idea that like men, women could do anything. “That’s why, starting in the mid-to-late 1960s, we gave Barbie actual careers, like Doctor Barbie and things like that,” Spencer tells me.

In terms of Ken, Spencer explains that, in the early days, his career was never a focal point. “We didn’t need President Ken because we already had that in real life,” she tells me. “Ken was more of an accessory to Barbie.” Even still, the sexism of the 1960s did peek through at times, as Spencer laments that, in 1965, “Ken was a pilot while Barbie was still a stewardess.” 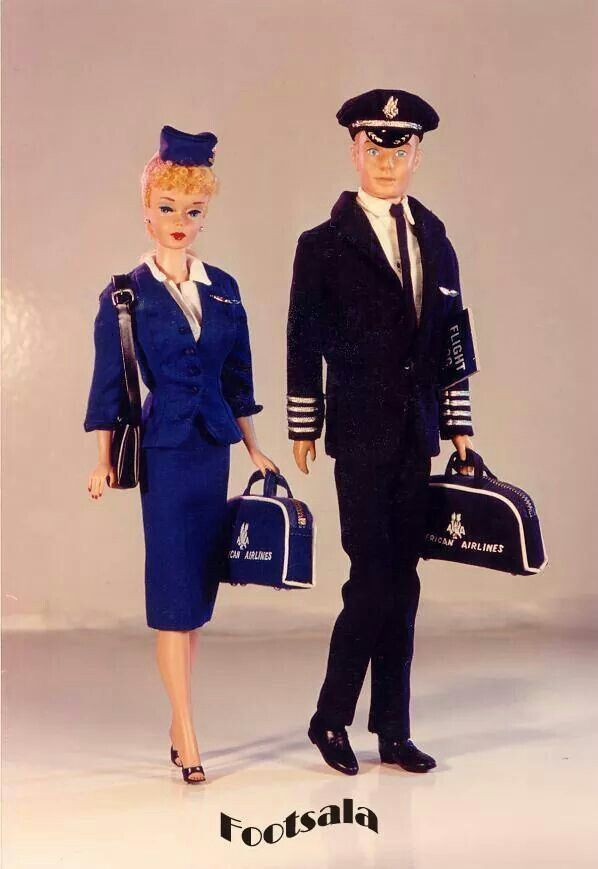 Speaking of which, though Ken would be depicted as a pilot and a doctor in every decade, his career options remained mostly limited throughout the 1960s, 1970s and 1980s. He mainly specialized in swimwear and sparkly suits, and that was good enough for him. In the 1990s, however, Ken seemed to get more ambitious, and over the past three decades he’s been depicted as a veterinarian, a photographer, an Olympic figure skater and a member of every branch of the armed forces.

Where did all of this sudden overachieving come from? It’s hard to say, but Spencer notes that, in the 1990s, Barbie especially took on a lot of new professions, and it seems that some of this spilled over into Ken’s realm as well.

But by giving Ken so much shit to do, it appears that the toymaker forgot who he was. “Ken was originally just Barbie’s arm-candy,” notes Parnett-Dwyer. It was a role that suited him well. He would wear matching outfits with Barbie and show off his abs when they went to the beach. He was just her himbo. He was never supposed to compete with Barbie — again, there was already far too much of that in the real world — he was just supposed to shut up, look good and let his lady bring home the bacon.

The fact that Ken seemed content in his secondary status was the character’s most endearing and important feature. Not only was he totally supportive of Barbie — especially for the 1960s — he was upending the status-quo of the whole capitalist patriarchy. If anything, by just chilling on the beach and working on his tan, Ken was being downright revolutionary (though I sincerely hope he chipped in in other ways).

I imagine it’s unintentional, but it seems that Ken’s latest iterations re-embraced this role. With Mattel’s current emphasis on diversity and fashion, Ken’s jobs have been left mostly by the wayside. On one hand, it’s unfortunate — and even a bit problematic — that a more diverse Ken has dwindling career prospects, but this will hopefully change once Mattel has moved on from simply introducing all these new Kens. In time, just as they’ve done with their Barbies, Mattel will likely depict these man-dolls in a wide array of careers.

That’s why I want to embrace this current moment in Ken’s history as a bit of a himbo renaissance. I originally thought it was curious that Ken didn’t have a good job, but as a proud Girl-Dad, it’s refreshing to see him return to his roots as a lazy beach bum (while also being more inclusive). After all, what better a symbol of female empowerment than a man who is totally secure in taking a back seat?