Demi Adejuyigbe Would Rather Watch the Girly Stuff

In collaboration with Junior High, a not-for-profit in L.A. dedicated to creating space for marginalized voices in the arts, MEL has produced a special print issue focused on contemporary masculinity. For the Men’s Issues Issue, six men from the L.A. area picked someone close to them to conduct an original interview about what it means to be a man today. In these conversations, which will run on MEL throughout the week, they talk about how societal expectations impact them and their work and what they think the best path forward is for men. First up — the internet’s funniest funnyman Demi Adejuyigbe, interviewed by his friend, comedian and podcast producer Kevin T. Porter.

To purchase a copy of the print issue — as well as a tote and pin — please click here.

If you don’t know who Demi Adejuyigbe is, don’t admit that to your friends who have good taste in comedy, because they’ll make fun of you forever! Here, though, is a quick primer to avoid ridicule: Demi is a disgustingly talented writer, comedian, musician, and, in my opinion, a pretty great friend. He’s written on The Good Place, The Late Late Show With James Corden, and maybe you’ve seen one of his stupid-funny (emphasis on stupid) comedy videos like his Succession theme song cover “Kiss From Daddy.”

Demi and I became friends back in 2013, and a year later we decided to host a podcast together called Gilmore Guys. One reason I’ve always connected well with Demi is he’s the kind of man I want to be around. We’ve both never naturally gravitated toward traditional performances of masculinity. We like being soft and silly and safe for those around us. I think in the last seven years of our friendship, we’ve been safe for each other too.

Well, I assume whatever we talk about will be golden.
I always think about us doing Gilmore Guys and analyzing this very female-centric show, but from a male point-of-view. And also not just going, “That’s crazy,” or whatever. A lot of people are trying to move past the macho Rambo style of masculinity by putting men in these scenarios where they’re embracing feminine things.

Right. It’s always done with a smidge of irony attached to it. And now, six years later, stuff doesn’t exist in the same way as far as gender-divided entertainment. It wouldn’t be novel if someone was like, “What if it’s two guys starting a show about Russian Doll or PEN15?”
I feel like there are some imagined gender divides in the audience for reality TV. If two guys started a thing about The Bachelor, people would be like, “Whoa.” But is that really as crazy as it sounds?

Yeah, I don’t know. I was thinking this morning, what are my thoughts about masculinity? Because it’s not something that, and correct me if I’m wrong, you and I think about on a regular basis.
Absolutely not, no. One thing that I do think about a lot though is what masculinity and femininity mean now without certain gender roles assigned to them. If being a breadwinner disappears as an aspect of masculinity, what are we left with? And what happens to femininity when those lines are blurred?

The mainstream discourse has changed so much in the last half decade at a pretty rapid rate. I wonder if, as a cis straight man, even considering my masculinity at all is regressive? Shouldn’t I just be like, people are people? But is that a different form of erasure that the Baby Boomer generation did as far as racial stuff went? I don’t see them as black, I just see them as a person.
Right. If these distinctions don’t exist, then the problems that come with them also don’t exist?

I think a lot about the responsibility that, especially in our positions of privilege, where the world — well, especially for me, as a white man — is set up for our success in a way that it’s not for other people. Society and culture has given you a certain amount of power, how do you steward that responsibly?
It’s not so much the gender performance as it is just the expectations that are thrust upon you, or the cards you’re dealt in a public sense. I do think there’s a certain, almost passive, instruction of how gender should be, and it’s more limiting than anything. It’s trying to tell people: Here’s how you’d be better. But I feel like it’s saying: Here’s what you can’t do. You’re wrong if you do or enjoy this thing. That’s where we get into toxic masculinity — forcing people into a box feels paralyzing.

Yesterday I went to karaoke and I was talking to these two women I met. A friend of mine, who I know through karaoke, came up and started talking to us. When the guy walked away, one of them asked, “Do you like that guy?” I said, “Oh, I really just know him through this other person.” And one of them said, “I’ve heard a bunch of women say he’s an asshole.”

In that moment, I’m in this position where I should definitely acknowledge that experience, and probably be like, “Well, what do you mean?” Or, how am I supposed to embrace this? And should I re-contextualize all my interactions with this person? Should I ask other female friends about their interactions with him? Because it wasn’t like he’s a criminal or had assaulted someone or anything.

It’s just more he’s a jerk and not a good guy.
Yeah. Maybe I should have to figure out what being an asshole means, and also not be dismissive by just going, “Boys will be boys.”

Is that a new feeling for you? Is that something that’s only come up in the last few years?
It’s come up a lot. I had a friend straight up tell me, “This guy sucks.” He was a friend, but a friend through this mutual friend, so it was easy for me to just be like, “I won’t hang out with that guy anymore.”

Yeah, cut ties.
It’s super easy to cut ties. I don’t know if this is true for both of us, but a lot of my friends are women. So for me to have a mutual friend that’s a man, I have almost inadvertently vetted them through my social circle of women. Them telling me, “Oh yeah, we know that guy, he sucks,” or just being like, “Oh yeah, he’s our friend too,” or whatever.

Totally. What was your gut reaction?
Well, it’s already a guy who I don’t love my interactions with in general.

It would be different if it was someone like me, or your roommate Gabe, where it would actually cost you something.
It starts becoming personal. If I’m friends with him, what does that mean? How do his actions reflect on me? So much of our interactions with people as men are centered on, well, appearances.

You’re saying you feel that non-altruistic impulse of whatever reputation you might have at stake in those moments?
Yes. I hate how it’s framed in my mind, but that’s just how my gut reacts. I’m just like, “How do I do this in a way where it’s not me trying to put my reputation first and foremost, because that’s gross?” But also, is it gross if the end result is what I should’ve done anyway? I don’t know.

It bums me out when people criticize the good intent of something or have bad faith about the way something’s communicated.
One thing I still have trouble with is trying to be the “good guy,” but in a very public way — the Matt McGorry of it all. He’s just become the poster boy for it in a way that I think every other man is like, “Well, thank God someone else is that now.” On one level, you’re trying to be a good person, but you’re making it your personality. Does this feel genuine or does this feel performative?

At some point you just end up selling something, even with the people who have good intent — it’s not like he’s selling climate change denial or something. What he’s talking about is fully valid and you would intellectually affirm, but the performance of it can be a little grating. But if the net result is positive, then you can’t knock it, on some level.

Was your dad in any way a model for how you wanted to be when you were growing up?
Not necessarily. I don’t have many standout characteristics that I look back on and think, well, that’s because of my dad. My dad worked far away for a lot of my childhood. I feel like I was raised just by my mother. That influenced me in some ways, but I don’t think I realized how until I got older and was just like, “Why do I hang out with so many women?” Well, you spent so much of your life being socialized by women, it makes sense.

If you had a son, would there be specific things you would talk to him about being a man?
I think about this a lot. Whenever I imagine my future, a family, I have one daughter and that’s how it’s always been in my head. It’s not even so I could protect her. I think I’d just be a better father to a daughter. I feel like we’d get along better. 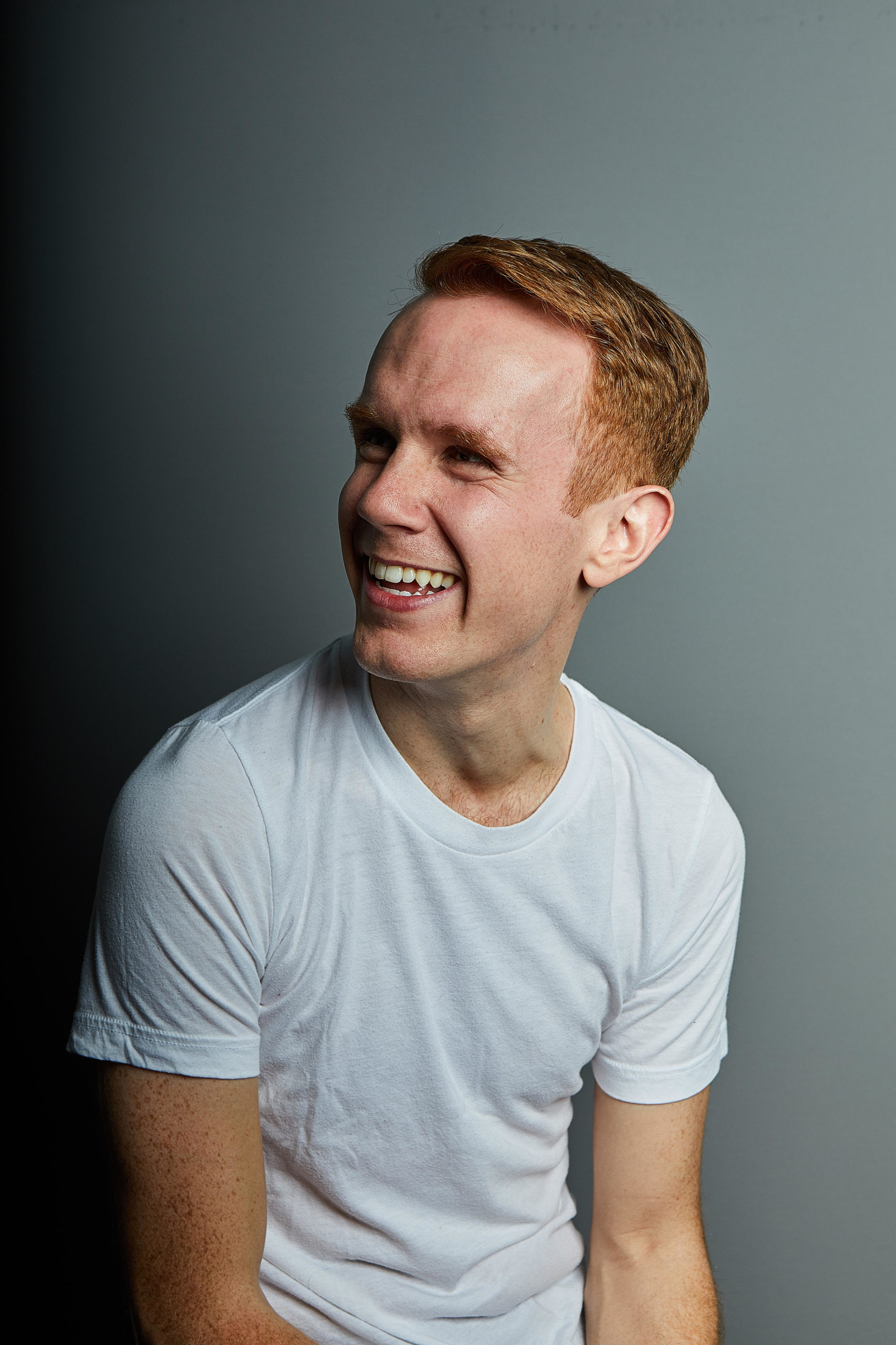 Kevin T. Porter is a writer / comedian and podcaster based in Los Angeles. He tries to be nice and not be mean all the time to varying degrees of success.