From Bongs to Bubblers: Every Weed Pipe and What It’s Good For

Shopping for weed pipes can be overwhelming. Some are big. Some are small. Some are shaped like enormous dongs. It’s hard to know which one’s right for you and your lungs — that’s why we enlisted a few pipe connoisseurs to explain the pros and cons of all the major weed-smoking apparatuses, plus how to smoke from a simple weed pipe. 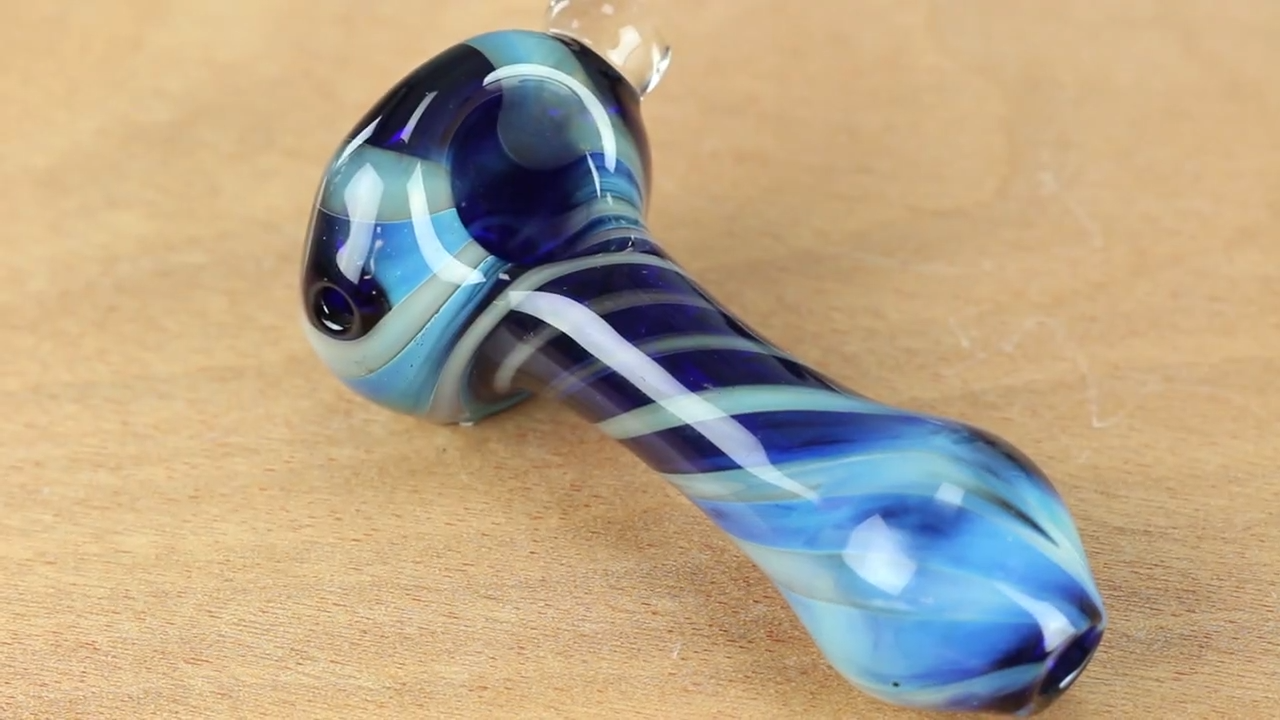 What It Is: This is the most basic of weed pipes. It has a small bowl for weed on one end and a little hole for your mouth on the other. Some have another baby hole on the side of the bowl, which is called a carb and promotes airflow.

How to Smoke From It: Put your thumb on the carb, light the bowl, inhale until the pipe is filled with smoke, release your thumb and enjoy being high.

The Pros: It’s small and convenient. “I keep one in the glove box of my car in case a fab opportunity for me to smoke weed presents itself during the day,” says former bong factory employee Vanna O’Brien. Plus, it’s durable.

The Cons: It has zero filtration, so it’ll hurt your throat. “Be kinder to yourself,” O’Brien says. “There are nicer ways to get high.” 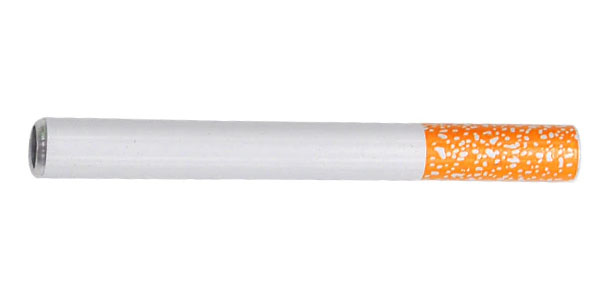 What It Is: As its name suggests, a one-hitter is designed to provide “one hit” of weed. It’s a small, narrow hollow tube with a hole on one end for your kush and a hole on the other for your mouth. That’s it.

How to Smoke From It: Pack ground weed into the end, place the mouthpiece against your lips, light, inhale and feel joy for once.

The Pros: Thanks to its small size, it’s extremely discreet and forces you to conserve your weed.

The Cons: If you’re looking to get super high, you’ll have to pack it with weed quite a few times. 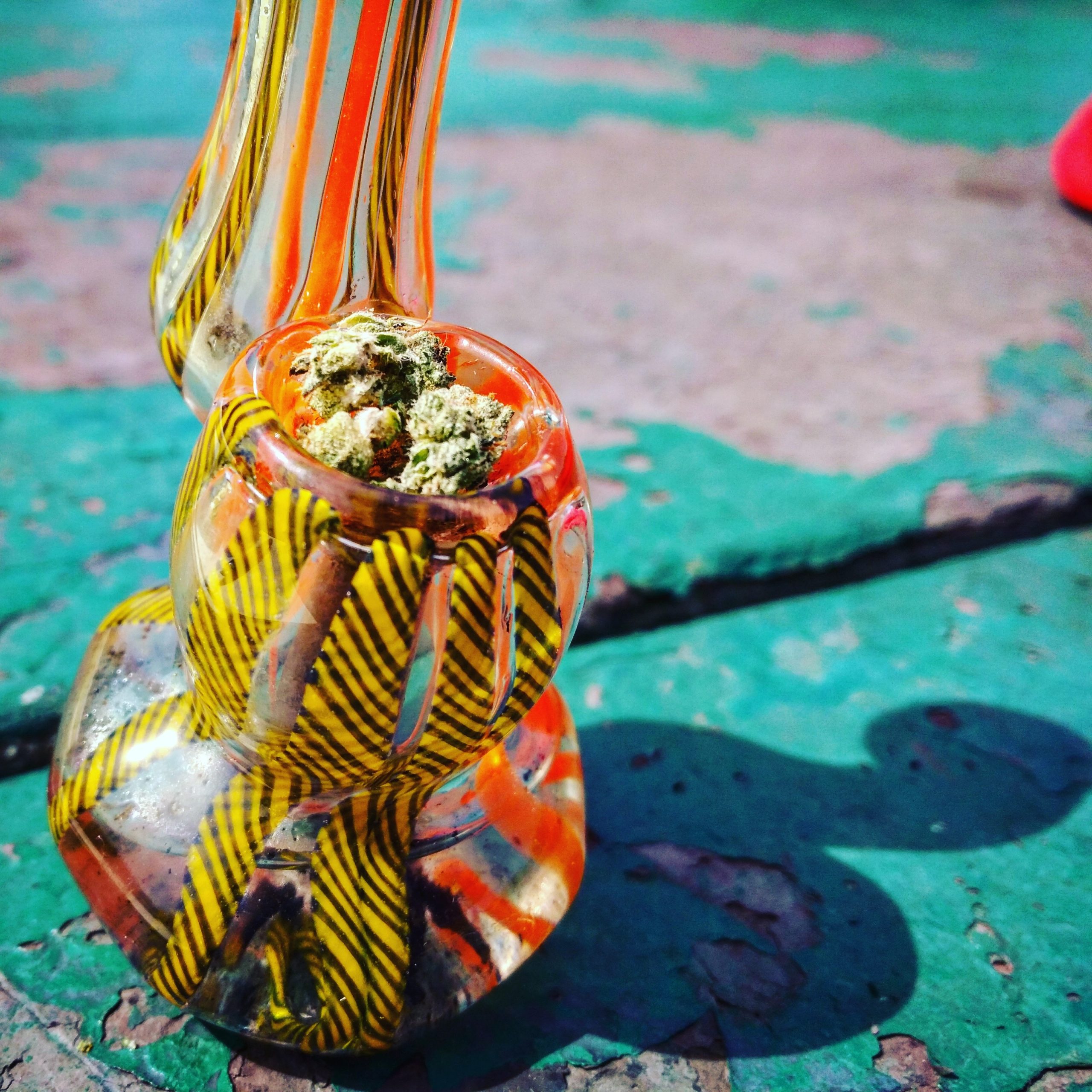 What It Is: Bubblers use water to filter the smoke. They typically have a bowl and carb, similar to a spoon pipe, along with a small jug-like section where the water is stored. It’s usually all one piece.

How to Smoke From It: Fill it with water (you’ll have to do a few test runs to see how much your bubbler needs, but it should be no more than an inch), load the bowl with weed, ignite, suck, release your thumb and keep sucking.

The Pros: It’s smoother on your throat than a spoon pipe, but it’s still a manageable size. “I’d take a bubbler on a family vacay, as it’s a practical way to smoke bong-style when you don’t have the comfort of your own living room,” O’Brien says.

The Cons: It can be tricky to clean (unless you read our pipe-cleaning manual) since it’s all one piece. Budtender Awards medalist Zulema Lino says the water also steals away some of your precious THC while you smoke. 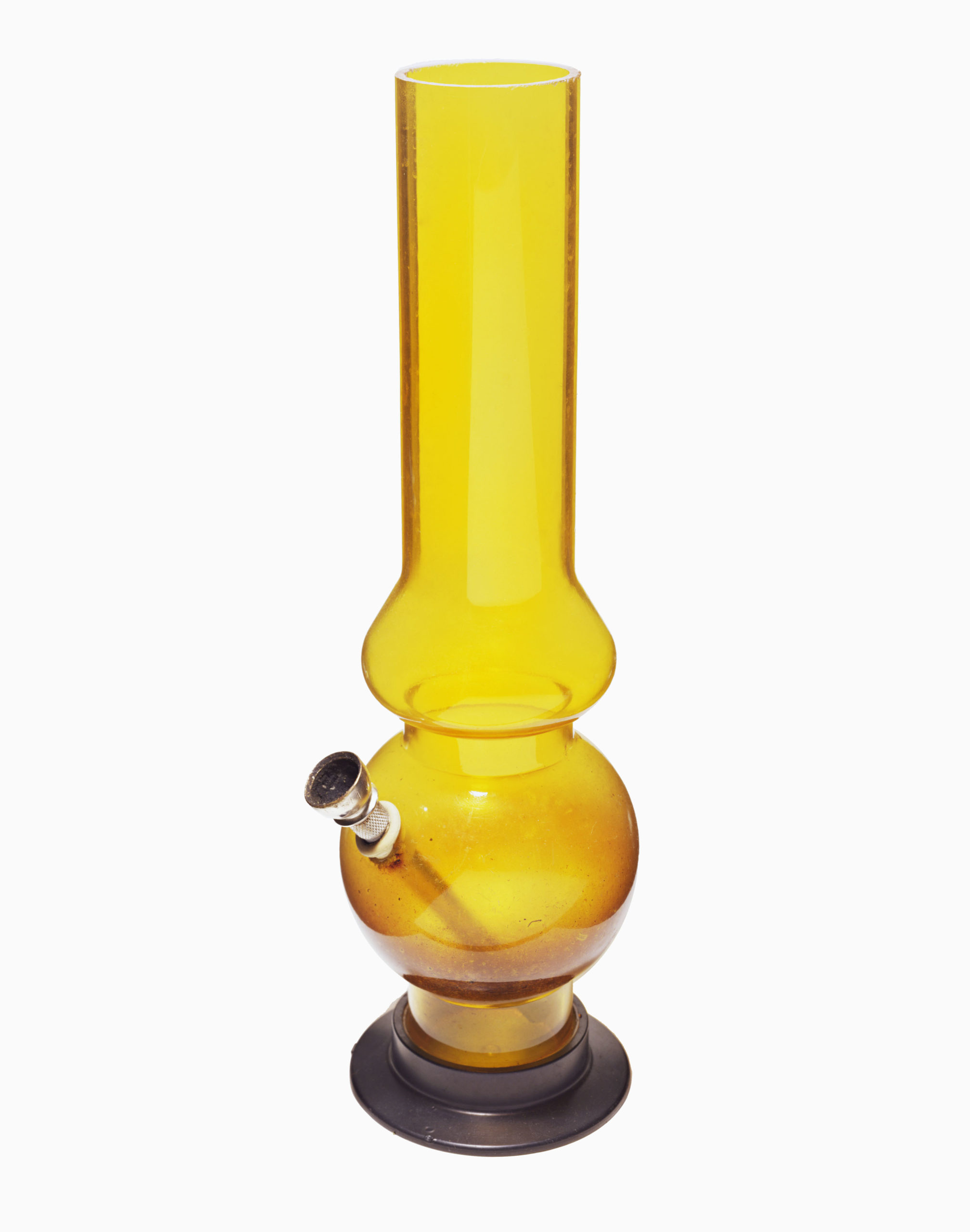 What It Is: A bong, which is essentially a big bubbler, is usually made up of a chamber for water at the bottom, a tube for your mouth and a detachable bowl. Because there’s more space between the bowl and the mouthpiece, you can take larger hits than you’d be able to with a bubbler.

How to Smoke From It: Fill the chamber with water (again, you may need a few test runs), load the bowl, place your mouth on the open end, inhale, ignite, allow smoke to saturate the chamber, pull the bowl out and get stoned.

The Pros: Lino says a bong can get you really, really high, because again, it can create massive clouds of smoke. It’s also smoother than a bubbler and can look like a piece of art. “You get the most mileage out of your weed when you smoke bongs,” says O’Brien.

The Cons: It’s big, which makes it hard to store and easy to break (unless you follow our bong storage guide), so it’s hard to hide from your grandma. Plus, fellow Budtender Awards champion Alex Almadova says strong lungs are necessary to smoke properly from a big bong, so starting smaller may be wise. 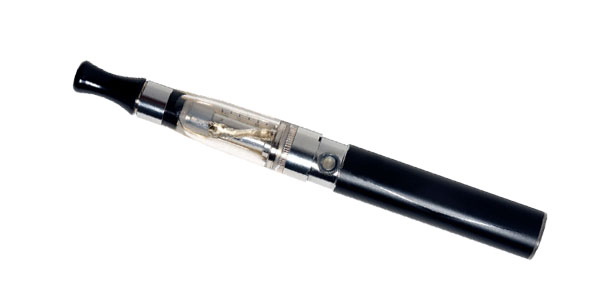 What It Is: A vape uses less heat than fire to vaporize — rather than combust — weed or THC oil. This results in what many call a “cleaner” inhalation. It comes in many shapes and sizes, from handheld vape pens to massive Volcano vapes.

How to Smoke From It: In most cases, you simply load your vape cartridge, make sure it’s on and suck.

The Pros: It’s easy to hide, since vapor isn’t as smelly as smoke. It’s super portable, too. O’Brien also says it induces less coughing, which makes it perfect to bring along on a sexy stoner date. Plus, she adds, “It could be a good long-term option, considering it isn’t as harsh on your beloved lungs.” (While it may feel that way, the science around how vapes impact your lungs is still up in the air.)

The Cons: It’s known for producing a mellower high, which is bad bang for your buck. It requires new parts every so often, too, which Lino says is “annoying.” Not to mention, you have to charge it regularly, which O’Brien says is “just so not cool.” And while vapes come in at a wide range of prices — from $30 to over $300 — your money will generally go further if you stick to glass/analog devices, especially when you account for maintenance. 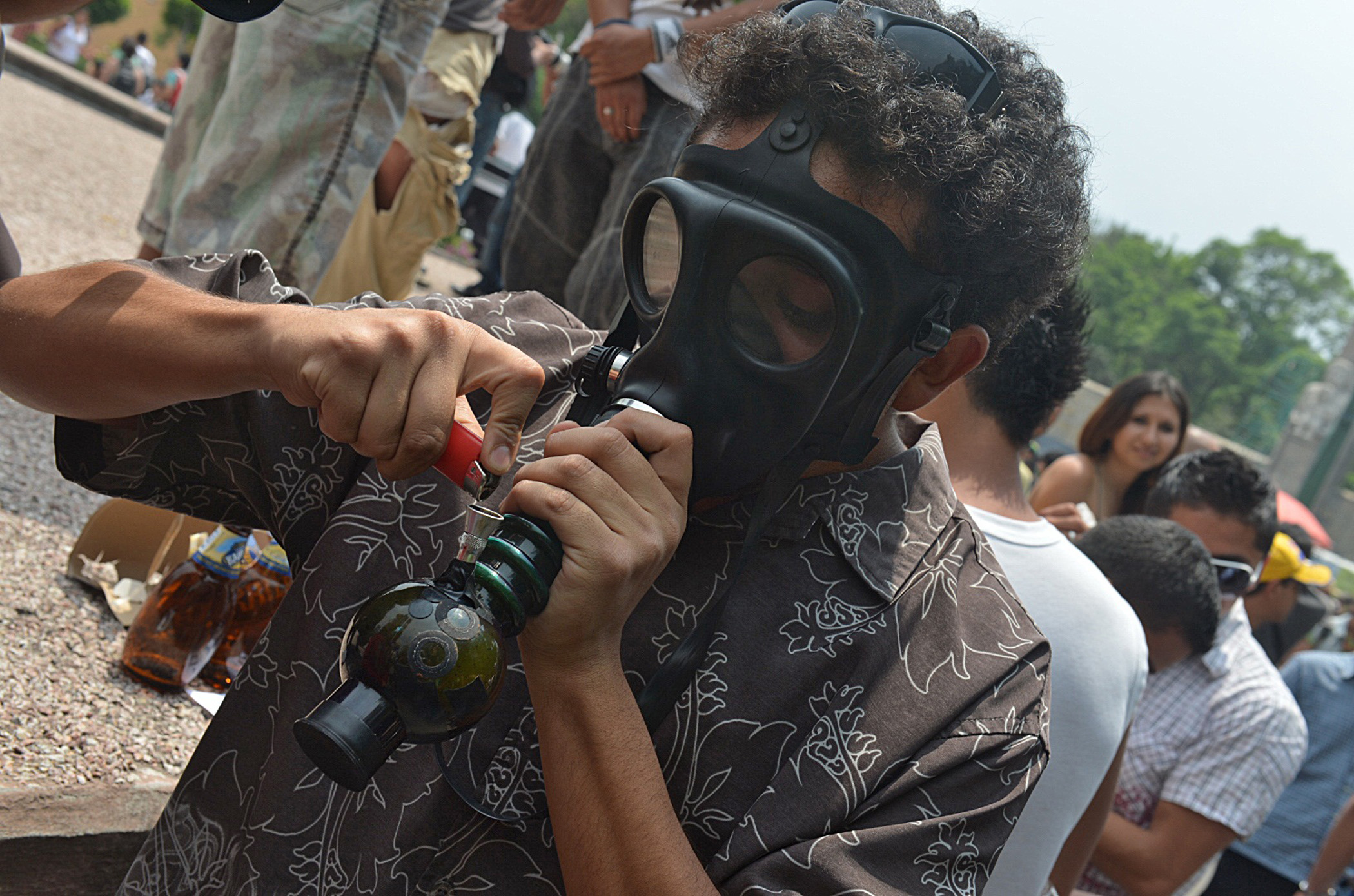 What It Is: This is literally just a bong attached to a gas mask.

How to Smoke From It: Put the mask on, light the bong and breathe, brother.

The Pros: Because you’re breathing an endless stream of weed smoke that’s increasing your highness by the second, O’Brien says a gas mask bong is “good for the well-versed stoner on a Friday night after they’ve had a shit week at work.” As an added bonus, she calls it “COVID-safe,” which I hope is true.

The Cons: You’re literally hot-boxing your face. Also, you may need a friend to help you light up, since it can be hard to see with all that smoke. Along those lines, O’Brien says, “The experience itself isn’t that pleasant after the novelty wears off.”

Oh, so you’re still going for the schlong bong, huh? I don’t blame you.