Inside the Creation of the Volcano Bong, the Peak of Weed Engineering

In February 1996, Markus Storz, then a graphic designer in Germany, was sitting in his basement when he came across an article about vaporization in a magazine. “It explained that you didn’t have to burn herbs in order to release the active ingredients, and that blowing hot air through the herbs would be sufficient to release them into a vapor without creating toxic byproducts,” says Storz. As a non-smoker, and “not a fan of combustion,” Storz knew that he had stumbled onto something unique, so the next day he bought a heat gun and tried vaporizing some herbs at home. “I soon realized that the principle actually worked, but dealing with the heat gun was rather difficult and there were no actual vaporizer devices on the market at that time,” says Storz. “In the beginning, I was only looking for a vaporizer for myself, and if I had found one that worked well at that time, I would have probably never invented the Volcano.” 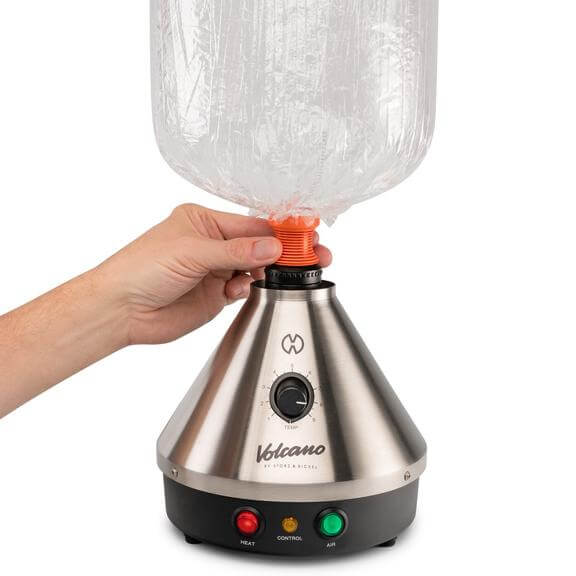 For those who’ve not yet had their brain chemistry reconfigured by a plume of marijuana vapor flowing from a condom-shaped bag the size of a small child, the Volcano is the jet ski of weed accoutrements: so extra but so fun that you’re likely to befriend someone you don’t like just to occasionally use it.

The cone-shaped device consists of a base unit where the hot air is generated, a removable filling chamber and a detachable “Valve Balloon” that looks like said condom. “The Volcano Classic [the original Volcano] uses a bimetal controller to set the temperature from 266 degrees to 446 to degrees),” says Storz. “The base unit contains a big heater and an air pump: The pump sucks ambient air into the device, where it flows in a spiral pattern along the heating element and heats up. The hot air is then pumped into the ‘Filling Chamber’ where it vaporizes active ingredients and releases them into an inhalable aerosol. The aerosol is captured in the Valve Balloon, which can be removed and inhaled from.”

Jake Browne, chief creative officer for The Grow-Off, and former cannabis reviewer for the Denver Post, tells me that the ingenuity of the Volcano was a big deal at the time. “When I was working with patients, because this was one of the first forced air devices where you didn’t have to inhale really deeply to get this, it was very special,” he says. “If you were somebody that had issues with your lungs, or it was hard for you to operate a pipe or a bong, you could just push the bag and vapor went right in your mouth.”

But of course, things didn’t start out so smoothly. In the beginning, Storz included an actual heat gun in his design; even then, though, he was starting to think about how to make a device that was easier to handle. He intended it to be suitable for all patients and chose the most stable shape he could think of that wouldn’t tip over easily — a cone. “With the heat gun in the center,” he says, “the device started to look like a Volcano — the top part of the heat gun formed some sort of crater, and it had a vent, too.”

After building his first prototype, Storz figured out that heat guns weren’t the best devices to heat up air, “because they might potentially release carbon particles into the airstream.” “And if inhaled, carbon is carcinogenic,” Storz tells me. So he decided to build his own heating system and came up with an air pump, a heating block and a bimetal controller, as well as a detachable balloon where the vapor would be captured.

By now, Storz had effectively built the prototype that would become the Volcano vaporizer, but he didn’t have the resources or the money to establish his own business and start production. At the time, he says, there weren’t a whole lot of people who wanted to have anything to do with medical cannabis vaporizers. “The market was very different back then,” says Storz. But he believed in his product and decided to produce the devices himself. “I had to get a loan from friends and family to be able to purchase the first parts for my series production,” he says.

Storz then mainly advertised the Volcano at trade shows and hemp fairs, where people were awestruck by the device. “I got a bunch of pre-orders, which I assembled in my basement on my own,” says Storz. “The first Volcano was sold in November 2000.”

That same year, Jürgen Bickel — the co-founder of Storz and Bickel, the company that brought the Volcano to the masses — bought two vaporizers (one for himself and one for his brother) from Storz’s first series production. “I was one of Markus’ old friends who had just finished a development aid project for a drinking water supply in Peru, and I’d returned to [Germany],” says Bickel. “I was familiar with the product, so Markus asked me if I’d be willing to help him out with the business.”

Soon after its release, in the mid to late 2000s, Browne remembers the Volcano being “a statement piece.” “You were fancy if you had a Volcano,” he says. “It was like owning a Nintendo when they first came out, or like having health insurance now.” The big appeal, he says, was that whenever you dropped a ton of money on a piece back then, it was usually glass, “which means it usually broke when somebody got too high and knocked it over. Whereas, the Volcano was kind of indestructible.”

Not to mention, Browne says, smoking from a Volcano is “a different high.” “Because it’s not like taking a bong rip where you’re just getting this intense cloud of smoke immediately,” he says. “It was more flavorful, but less harsh.”

This was obviously all by design, according to Storz. “The maximum temperature is low enough to prevent combustion while simultaneously ensuring an extraction of the main active ingredients,” he says. “The Classic [Volcano] uses a pure convection heating, meaning the herbs are heated only through hot air, which makes for an even, smooth and very efficient vaporization. The vapor is cool, flavorful and pure.”

By most measures, Storz and Bickel are considered by many to be the founders of the vaporizer industry. “When the Volcano was released, it served a niche market as one of the first vaporizers worldwide,” says Storz. “It was also the first vaporizer to receive medical certification internationally.”

But as is often the case, it didn’t take long for others to catch up to the benefits of vaporizing technology, and by the late 2000s, there were plenty of competitors creating cheaper vaporizing solutions. This meant that at a price point anywhere between $500 to $700, a Volcano vaporizer was never primed to become a ubiquitous stoner’s device. “It was for people that either had too much disposable income or whose primary income came from selling cannabis,” says Browne.

Price point aside, Browne tells me that the other major obstacle for the Volcano was, and still is, the fact that it is, by design, a device that “delays gratification.” “There’s an immediate gratification that comes with firing up a joint,” he says. “I can get a pack of joint papers for less than a cup of coffee and roll it up, and people take pride in how they roll. But stuffing a Volcano and then waiting for it to heat up, it ultimately just wasn’t that interesting. It’s like a novelty, and the novelty wears off pretty quickly.”

Perhaps most importantly however, Browne says the weed industry has simply changed since the Volcano’s relase. “The Volcano is big, bulky, utilitarian,” he says. “There’s nothing sexy about it. Everything is gone to product design and experience.” He’s right: Nowadays, avid smokers are more intrigued by compact devices like pens and even a wine glass that provide much of the same experience as smoking from a Volcano.

To their credit, Storz and Bickel have released several iterations of the Volcano to date. But even the most advanced version, the Volcano Hybrid, which was released in June 2019, is still fairly cumbersome compared to, say, a handheld vape pen. Naturally, it offers more features, like combined convection and conduction heating, which enables it to heat up 10 times faster and therefore be ready to go in only 40 seconds, as well as Bluetooth connectivity. But in the scope of the vaporizing market, even this latest device feels like something past its prime.

“They’re not even in the Apple Store? Come on,” says Browne. “They’re this really fascinating niche product from a moment in time, that when you talk to somebody who is in their mid to late 30s, they’ll always remember their first Volcano. But if you talk to your average millennial today, they will have never experienced a Volcano.” 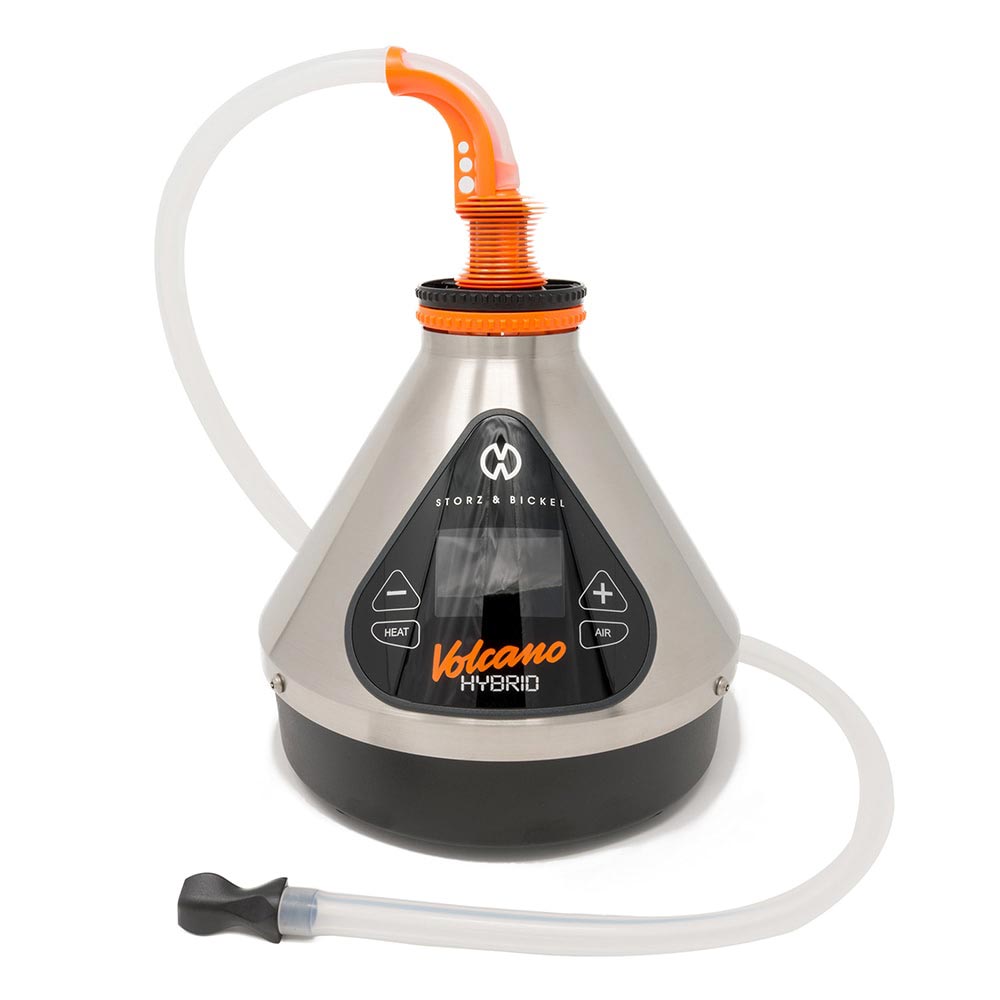 Ultimately, Browne thinks that the Volcano lost its place on the stoner’s mantelpiece once cannabis culture grew in popularity. “This new generation, they approach cannabis like people approach coffee,” says Browne. “Would you rather just pop in a K-Cup or a cartridge and have, five seconds later, the gratification of doing it, or do you want to grind up a bunch of weed and then put it in your Volcano and then hit the switch and wait for it?”

In that sense, Browne compares the Volcano to the French press. “Like, sure, if you have time and you really, really care about it, you might still get one,” says Browne.

Essentially, these days, the volcano is what vinyl became in the 1990s and early 2000s — a seemingly obsolete method of enjoying something that could be done far faster and with less effort. But who knows what the future might bring? After all, vinyl is back. Maybe a new generation of stoners will soon enough uncover this metallic piece of cannabis culture lore, fill up a bag full of vapor and forget about their handheld vape pens altogether.