What Happened in the Days After My Epic ‘Avengers: Endgame’ Marathon

My 59-hour Marvel movie event ended with me simultaneously shitting and throwing up in a New Jersey rest stop. Here’s what my body and I went through next

A few weeks ago, I went and saw Avengers: Endgame for the fourth time. For this latest viewing, I went to my local drive-in and thoroughly enjoyed the experience all over again. Fortunately, this screening — and the two before it — have nearly replaced my miserable first experience in seeing the movie, which I did as part of an AMC special event where every Marvel movie was screened back-to-back. My story, which I chronicled here — “What It’s Like to See ‘Endgame’ After a 59-Hour, 22-Marvel-Movie Marathon” — ended with a sleep-deprived, delusional me sick to my stomach in a New Jersey rest stop, puking and shitting my brains out at the same time.

Needless to say, it wasn’t a pleasant experience.

I guess it makes sense to start where I left off. It was about 10:30 p.m. on April 25th when my wife pulled over into that Garden State rest stop, where I’d spend the next 45 minutes sick as hell in the bathroom. I spent the next two days in an absolute haze. In addition to being told not to drive, I was advised by The Sleep Doctor Michael Breus that I should let my body sleep for as long as I possibly could after staying awake for nearly three days straight (a grand total of 65 hours, with only a few brief, half-hour naps, some voluntary, some not).

Getting home around midnight on that Thursday night, I ended up sleeping until about noon on Friday, where I got up, took a piss and decided to make something to eat. While I hadn’t drunk any booze throughout the marathon for fear of getting sleepy, it still felt like I had a hangover, so I turned to my trusty hangover breakfast: Pancakes. As I started cooking up my just-add-water Aunt Jemima, I had an idea for another delightfully dumb piece: I would stake out my local Domino’s — including trailing the delivery guy in my car — to determine how accurate the Domino’s Pizza Tracker is.

At the time, I couldn’t tell if the idea was insane or brilliant, but I decided to email it to my trusty editor, Nick Leftley, anyway, along with a disclaimer about how sleep deprived I was. Nick was militantly in the “brilliant” camp, and as it would turn out, that piece would end up going viral — just as, unbeknownst to me, my Avengers marathon piece was doing that very Friday afternoon as I was blearily frying up those pancakes.

Usually — because I’m a self-obsessed, insecure writer — I tend to check out how my stories do on social media, especially Twitter, but it wasn’t until I’d gotten a congratulatory/are-you-still-alive email from Nick that I discovered how much everyone was talking about my sleep-deprived adventure. Some applauded me for my damn near Asgardian efforts, like this one:

Others remarked how stupid this entire thing was (they weren’t wrong):

Not only was the piece doing well on Twitter, other outlets were reporting on it as well, including the A.V. Club, Gothamist, and a flurry of Chinese sites that I cannot possibly understand, even with Google translate. It was actually from those Chinese sites that my very favorite thing about this whole experience originated, i.e., this image here: 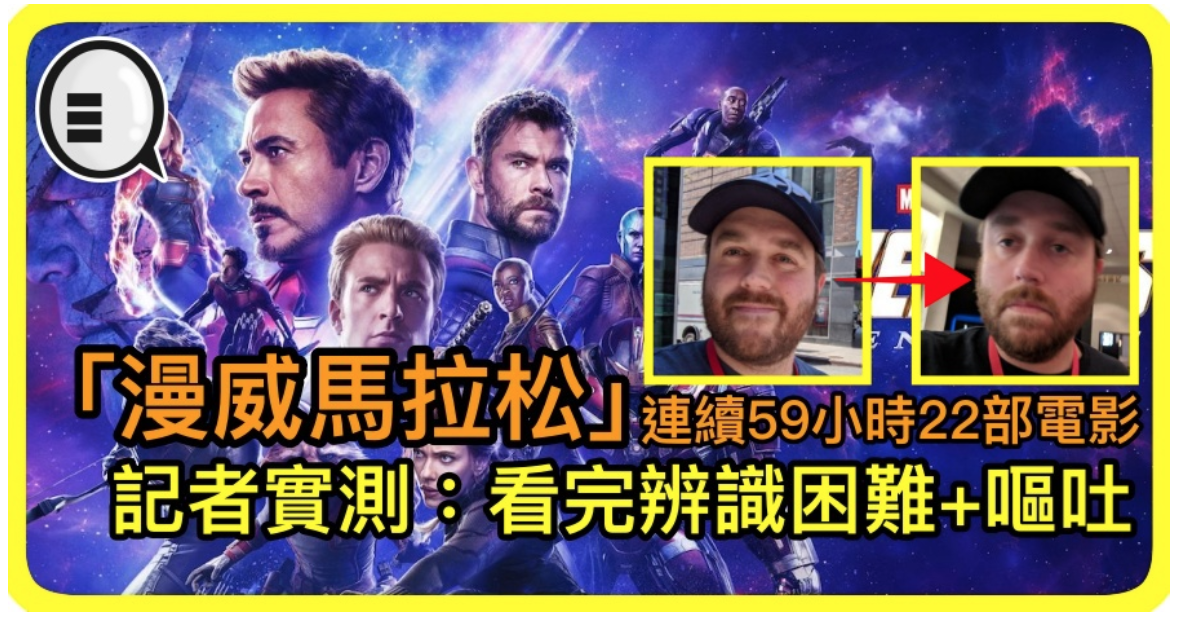 I don’t know what it says and since it’s an image, I can’t translate it, either. I’m kind of okay with the mystery, though: I like to imagine it says something like “Moronic American Nearly Dies While Watching Thor,” but maybe that’s too good to be true. Anyway, I’m obsessed with this now: It’s become my banner on Twitter, and I’m considering what else I can do with it. Maybe a poster in my already ridiculous basement? We’ll see.

Anyway, back to the pancakes. After scarfing down some flapjacks and feeding my ego through all the internet attention, I decided to head back to bed less than an hour after I woke up. Not only was I still feeling like shit, but I had a very good reason to catch up on sleep: On Saturday afternoon, I had tickets to see Avengers: Endgame again.

This, as it turned out, was a brilliant move because, much to my horror, I didn’t like Endgame at all the first time I saw it. When I went into the marathon, a big fear of mine was that I’d end up hating all the Marvel movies at its conclusion. While that didn’t happen for any familiar territory — I don’t hate any of them, not even Thor: The Dark World — I did come out of it not liking Endgame. On first, addled viewing, the movie felt like it was overly humorous, as though the whole thing was a joke (fat Thor, say), like it was moving way too fast (Thanos’ decapitation), and with things like Captain America wielding Mjolnir, that it went too far into the territory of fan service.

I declined to mention any of this in my piece, in part because I was respecting the spoiler ban (which included literal death threats from Nick), but also because I was steeped in denial. How could they fuck it up this bad? I thought to myself. I’d spent not just 60 hours of my life leading up to this thing, but 10 years as a die-hard Marvel movie fan, so I couldn’t accept just how disappointed I was.

Eventually, it occurred to me that maybe it was simply my state of mind. After all, I’d spent three days without sleep to see an epic, three-hour long adventure featuring a talking raccoon, criss-crossy time travel and an intellectual version of the Hulk. How the fuck could that not be confusing? While I tried not to let it shape my opinion of things, I did go to Rotten Tomatoes to check out the movie’s score on there, just to see if it was indeed only me who thought this movie was a shitty mess. Fortunately, the movie’s score stood at a more than solid 94 percent. Good, maybe it is just my state of mind, I thought.

By the time Saturday afternoon rolled around, I was fully refreshed after about 20-some-odd hours of sleep. I went to see Endgame for a second time, and I loved it: I loved the all-female team-up (which had seemed too pandering at the time, but on second viewing was just a kick-ass moment), Smart Hulk and the pacing of the whole monstrous, episodic venture. I especially loved Captain America swinging around Mjolnir — holy shit, was that amazing! I loved it so much that I’m now trying to figure out how to afford this ridiculous thing for $400. It was a pitch-perfect ending to the Marvel Cinematic Universe as we knew it: It was funny where it could be, heavy where it needed to be and I can’t fucking wait to see what happens with fat Thor (man, I’m psyched about that).

Overall, I think the Marvel marathon was a valuable experience. Not only did that Chinese banner come out of it, but it was my first work to go viral, which was a nice, esteem-fueling experience. It also made me realize — by way of the Domino’s Pizza Tracker — that sleep deprivation may help inspire future good ideas.

So with that in mind, would I do it all over again?