How Wojak Memes Took Over the Internet

The poorly-drawn melancholy bald man is the Extremely Online’s Mona Lisa, and like da Vinci’s masterwork, he’s stood the test of time

Like Vincent van Gogh’s Dr. Gachet or Frida Kahlo’s Wounded Deer, many believe the portrait known as “Wojak” was born of heartbreak. The original artist’s thin strokes in MS Paint of a melancholy bald man reach deep into the souls of those who gaze upon him, making him the dominant image of the modern memosphere and the Mona Lisa of the Extremely Online.

He is also a total paradox: Simple yet complex, widely recognizable yet infinitely customizable, and maybe most interestingly, wildly famous yet of unknown origins. “From what I can tell, the origin of the illustration and who made it is still a mystery,” says Don Caldwell, editor in chief of Know Your Meme.

The best history of Wojak relies on the unverified claims of Reddit user u/Voyack, who claims to be the person who kickstarted the meme. “Voyack says in this post that it was he who went by ‘Wojak’ on the board, and he took the illustration from Vichan, where it first appeared with the filename .twarz, meaning ‘warm face.’ He took that image and posted it to Krautchan lamenting about not having a girlfriend,” Caldwell says. “So Voyack claims to be the one who started it, but whether or not the story actually matches what this person is saying gets a little murky.”

As the portrait made the rounds on different image boards, it became known as “The Feels Guy.” “From The Feels Guy, there was a specific variation called, ‘I Know That Feel Bro,’ which is one of the earlier versions that spread from Krautchan. It’s the Wojak character hugging somebody else saying, ‘I know that feel bro,’” Caldwell explains. “That’s when he really became popular, in the Advice Animal era of 2011 to 2012.”

In the decade since, as millions of memes have come and gone, Wojak has continued to thrive. “Wojak prevails because it’s morphed into this archetype for the everyman,” Caldwell explains. “He’s appeared in so many different situations and portrayed so many different emotions that people don’t even associate him with the original ‘Feels Guy’ image anymore. It’s so adaptable to almost every type of character. Small changes and tweaks with different symbols allow people to identify Wojak as this entirely different personality type or situation.”

For instance, here are a few Wojak variants that have gone viral in their own right: Doomer Guy Wojak, Doomer Girl Wojak, Dick Flattening Wojak, Printer Go Brr Wojak. Each communicates something completely different, yet the original Wojak illustration is still recognizable. For Caldwell, that’s what’s really fueled the meme’s enduring popularity. “The internet community’s level of familiarity with Wojak is such that all you have to do is the head shape, not even the face, and people will immediately know Wojak,” he says. “Therefore, any variation of Wojak will spread because people will think, ‘Oh, I know this shape. Wait, what’s different? Oh these things are different, so what does this symbolize?’ Having that baseline familiarity draws people in.”

Not to mention, Caldwell adds, “The simplicity of the artwork is a low barrier of entry. Anyone can take the outline and put it somewhere else. And that lends itself to communicating complex ideas with tiny changes to the original.” 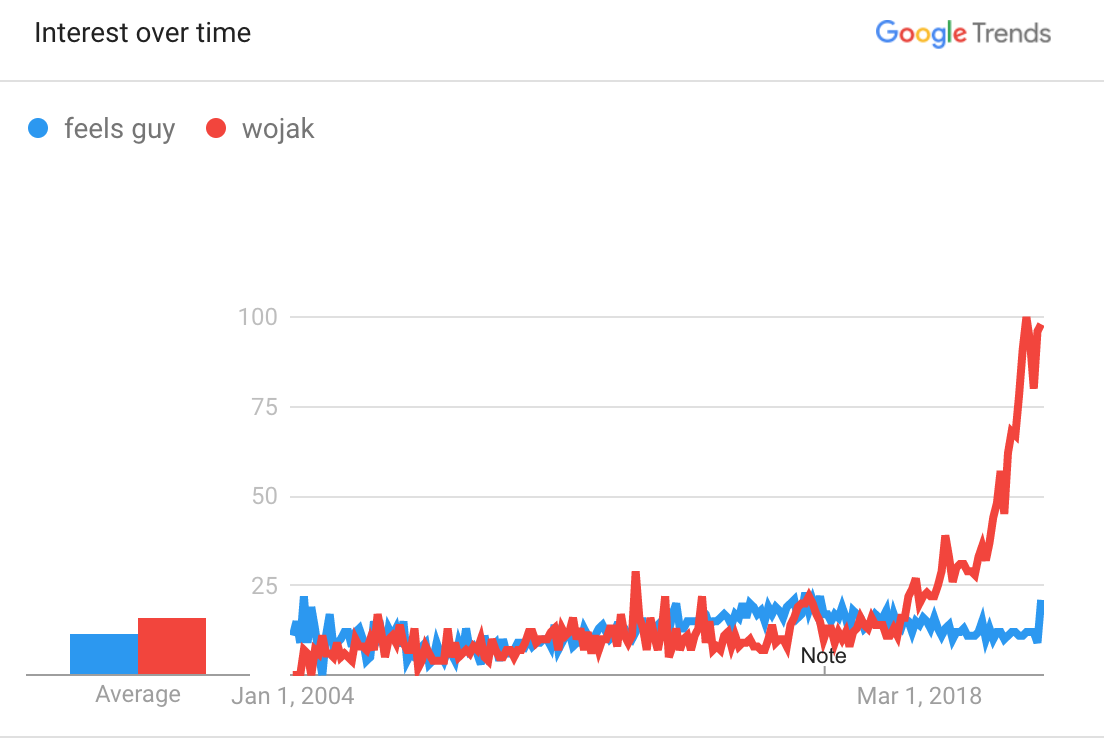 According to Caldwell, we’re currently in “something of a renaissance for Wojak,” which began in 2018 with the creation of Oomer memes, which, in turn, led to the Doomer Girl comics appearing in January of this year. “And those spawned what are essentially rage comics,” Caldwell tells me. “It feels ridiculous to say ‘rage comic’ in 2020, but in essence, it’s the same thing. You’re using these customizable comics where you use these characters to make jokes — Trad Girl, Yes Chad, all those. The comics also laid the groundwork for a meme like I Wish I Was at Home Wojak to see a brief resurgence like it is right now.”

As my colleague Miles Klee describes it, I Was at Home Wojak is an old format given new meaning by the pandemic, especially for introverts: “It could be a simple case of old content turning fashionable again. On the other hand, it might signal a new preoccupation with the dynamics of (currently verboten) social events. Like the original artifacts, the new comics always cast Wojak as the guy hovering awkwardly in the corner at a party, often running through an internal monologue of his observations and niche interests, yet they come with different context: In 2020, opportunities for this kind of public introversion are uncommon.”

“It might sound crazy, but in 50 years, I wouldn’t be surprised if there were history classes where people are learning the meaning and history of Wojak and Pepe memes — if they’re not still relevant,” Caldwell laughs. “Wojak’s been used to communicate a decade’s worth of different ideas, emotions and personalities. It’s wild, but that’s why it’s still popular to this day.”