What the Greek God Momus Can Teach Us About Trolling

Like many kids, I grew up reading D’Aulaires’ Book of Greek Myths, a richly illustrated volume of ancient gods, titans, heroes and monsters. I reread it so often, in fact, that I can state for certain that nowhere in its pages does the name “Momus” appear. I had to learn about him on Twitter.

Momus, it turns out, is the Greek deity who best embodies what we’d call “trolling” today, a voice of criticism, ridicule and natural antagonism. (As such, he is also associated with satire, poets and writing in general.) His name is an echo of the Greek word “μομφή,” meaning reproach or blame. Reading up on his history, I have a decent idea why he’s not commonly included in anthologies like D’Aulaires’: You wouldn’t want your child to get the idea of nitpicking literally everything you say or do — at least not before puberty. For although Momus’ background is rather obscure, there can be no doubt what role he played in the court of Olympus. The Greek gods were very human in their flaws, and Momus was there to point out every imperfection.

Here’s a rendition of his most infamous shit-talk, courtesy of the classics blog Aesop’s Fox: 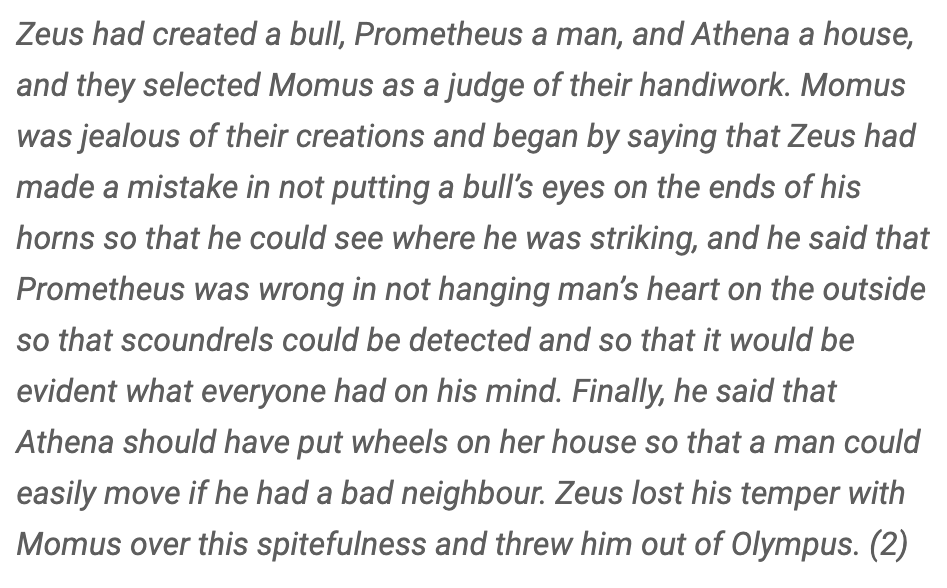 Incredible. Even Zeus had an irritating Reply Guy to deal with. Fortunately, as the mod of all creation, he was able to ban Momus from his most exclusive platform. It’s clear from episodes such as this one — and Momus’ alleged role in advising Zeus to orchestrate the Theban and Trojan Wars to relieve the suffering of Earth, which was weighed down by the scourge of humanity — that for the ancients, this was a god of contempt and darkness.

He is the bastard child of Nyx (the Night), who “lay with none,” and a sibling of sorts to gods including Moros (Doom), Oizys (Misery) and Eris (Strife). Vexed by the difficulty of finding anything bad to say about Aphrodite, the beautiful goddess of love, he took her to task “for having creaky sandals and for talking too much.” His incessant badgering and naysaying, in Aesop’s telling and elsewhere, is portrayed as clearly unproductive, the habit of someone who cannot create anything of value himself. And so might we accuse the snide commenters of today’s internet.

Over the centuries, however, Momus was appropriated by many European authors and philosophers who reinterpreted his role in the imagination, and their work provides a valuable diagram of trolling as a double-edged sword. As historian George McClure outlines in his 2018 book Doubting the Divine in Early Modern Europe: The Revival of Momus, the Agnostic God, the contrarian figure came to be a shorthand for rational skepticism at times of great upheaval for Christianity, and a mascot for the interrogation of authority that was critical to the Enlightenment.

In this period, McClure writes, Momus shifted from an explicitly religious role to a literary one. Whereas the Momus of antiquity was said by the poet Callimachus to write graffiti that said “Kronos is wise” — trolling Zeus by praising the father he overthrew to become ruler of the gods — Momus more than a millennium on was the jester who could speak bold truths to a king in the guise of foolishness, or the critic hungry to pick apart the weaknesses of a doctrine. He may even be a model of Satan in Milton’s Paradise Lost, the fallen angel who rebelled against heaven and drew allies to his infernal cause by the persuasive power of his rhetoric. 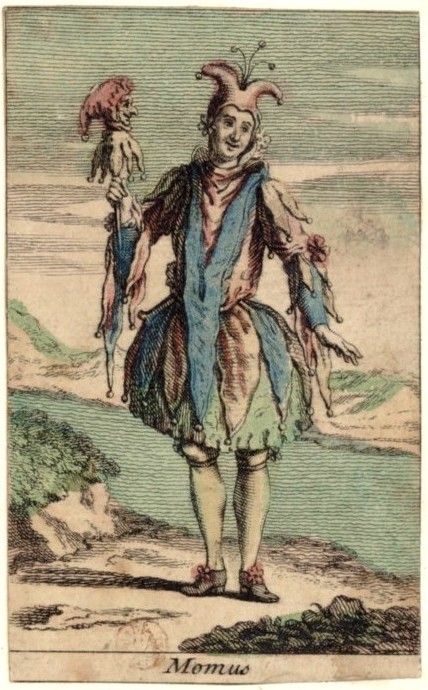 After a long complication of his flatly heretical beginnings, Momus seems more like the contemporary online troll, able to incite anyone and poke holes in any argument. He represents the full potential of free speech (parrhesia in the Greek), but also, perhaps, the price of speaking so candidly, and the way that a fact assaults our lazy preconceptions. It is in Momus’ character to provoke and destabilize wherever possible, which can be a troll’s gift and curse alike — for while he is tireless in making a point, he is really only doing it in obedience to an impulse.

Fundamentally, the troll does what he does for the sake of trolling, and Momus is the absurd extreme of what happens to someone who becomes incapable of agreeing to or believing in the simplest proposition. In the end, he’s still a guy on the sidelines, telling the rest of us that we’re doing everything wrong. Up to a point, criticism is constructive. After that, it’s just a harangue. Likewise, there is a difference between incisive satire and shitposting your opponent into submission.

At his best, Momus excels in spotlighting hypocrisy. The Syrian satirist Lucian depicted him informing a council of the gods that, as professor David Marsh puts it, “men are justified in their doubts, for in fact the gods seldom reward the just and often engage in the scandalous behavior sung by the poets.” Some 1,300 years later, the Renaissance artist Leon Battista Alberti penned Momus, a comedic sequel of sorts, in which the god is described as “an aggressive obstructionist, hostile and annoying,” which must sound familiar to anyone who hangs around on social media. Alberti also envisioned the consequences of calling out those positioned above you: Exiled from Olympus, Momus roams the Earth convincing mortals to shun the gods until he is caught and castrated by Juno, then chained to a rock to suffer more.

Our trolls, too, are self-defeating after a fashion, for they waste their own time and suffer rebuke as severe as the scorn they dish out. The question they should ask themselves is whether what they say is a righteous, necessary statement of truth, or a reflexive, hollow exercise — playing devil’s advocate, moving the goalposts, muddying the water. We need dissent in order to understand and improve ourselves, but most often the troll has no interest in this, and will settle for ruining his enemy’s day. Like Momus, he will never be satisfied, for then he would have no reason to join the discourse. Which must be a whole other kind of hell.