Say Farewell to Another ‘Summer of George’

Every summer is wasted, but the loss hit harder in 2021

Aside from dating many attractive women and holding a number of plum jobs over the years, Seinfeld’s George Costanza is a loser. Not simply in the sense of being a petty, whining, not-especially-bright pathological liar, but on the cosmic scale: Fortune does not smile upon him. He is always foiled, and if he gets his way, it’s not for long. The other shoe always drops.

This dynamic reaches its greatest fruition in “The Summer of George,” the finale of Seinfeld’s eighth season. Having finally lost his job in management with the New York Yankees, George discovers he’s due three months of severance pay. He decides this is a blessing, a chance to make the most of the summer ahead — hence the episode title. Instead, he quickly becomes a TV-addicted, junk food-inhaling hermit, unwilling to leave his couch, let alone the apartment.

In the end, George falls down a flight of stairs, and at the hospital, a doctor informs him that because his body was already in atrophy due to his slothful lifestyle, he may not walk again. He grieves for the summer it should have been. As the credits roll, he starts painful physiotherapy. 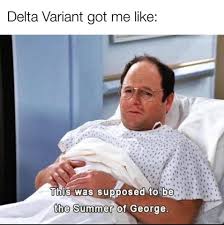 All of us can identify with this crushing feeling — not that we’ve all had paralyzing accidents. It’s the feeling that time and opportunity have slipped through our fingers. The deeper punchline of “The Summer of George” is that George would have wasted his summer anyway, and found himself with the very same regrets. We experience this disappointment whenever the season ends, noting the pull toward the chill of autumn and winter, the headache of the holidays, the return to school and months of work without a vacation. But the summer of 2021 may be the most Georgian yet. Summer 2020 arrived three months into the pandemic, and we knew not to expect any fun or freedom in it. This year, we anticipated a “slutty” or “hot vax” summer of reopenings, travel and wild abandon, and instead were met with setbacks in the vaccination effort, the return of mask mandates and a general malaise. It was, in fact, “down bad summer.”

And George is frequently down bad.

Except, if everyone missed out on their dream summer, why would anyone be in a funk? We should remind ourselves of the true message of this iconic TV episode: Whether by quirk of fate or our own mistakes, humans waste whatever they have. The U.S. could have vaxxed the entire population, squelched the Delta variant and given us one more stimulus check for good measure, and we’d still have to endure the malaise that sets in around Labor Day. There’s no workaround and there never has been. The minute summer comes to a close, it hits us; this was another Summer of George — once sprawling, infinite, full of potential, and now evaporated.

I’m reminded of a joke from a different classic sitcom, The Simpsons. Bart breaks his leg shortly after the family gets a pool, and despairs at missing the summer. Homer tries to cheer him up:

Yep, missing every summer is just how it is. May as well find something else to look forward to.