“LMFAO — can’t even respond to me huh? Bunch of fucking mods with no life banning people they don’t agree with,” reads one of several messages that greet Sy Cameron, a volunteer moderator for the 935,630-member subreddit r/dating, every morning. “Pathetic! Where’s our free speech?”

“I’ve been called every name in the book — probably ‘Nazi’ the most,” the Texas native tells me.

On a daily basis, red-pilled members of manosphere-centric communities like r/askTRP and r/MGTOW2 seep into otherwise neutral subreddits like r/dating in order to recruit more people to their cause. Standing in their way are a handful of volunteer moderators like Cameron who work long hours to prevent the subreddit from disintegrating into a bleak, misogynistic wasteland.

In the first six months of this year, Cameron and the other r/dating moderators removed more than 9,200 comments and 5,200 posts that violate the subreddit’s rules against spreading red- and black-pill ideologies.

Though red-pill recruiters can be found anywhere on Reddit, they specifically flock to relationship and dating subreddits to exploit a primed audience. “If I wanted to convert more followers to the red-pilled mindset, of course I’d target subreddits populated by young men who are just getting their toes wet dating,” Cameron explains. “Maybe a few of those guys are a little frustrated with dating apps or have had a few bad dates, so they’re open to persuasion.”

Cameron believes r/dating is targeted even more than other relationship and dating-centric subreddits because users coming from toxic subreddits often have actual problems with dating, rather than relationships. And, unlike other dating subreddits, r/dating hasn’t outright banned “venting” posts that allow people to express their frustrations with aspects of dating that cause emotional distress, and also serve as the perfect cover for the red-pilled community to cull new recruits with posts like, “No sympathy for women,” and “Women are like jobs, they want years of exp even tho they say ‘none needed’.”

“We would call them ‘seed’ posts,” says Antidense, a former r/dating moderator for seven years. “Posts that would attract a lot of attention — especially ones that would generalize about women having unrealistic expectations or a post about a woman who cheated on a guy — would get hijacked by red-pillers, who would use them to spread their philosophy.”

Case in point: BumblingBeta, a redditor with a rich history of posting to extremist pill-centric subreddits. “I did do an experiment a couple of months ago with a good looking male,” he posted to r/dating (sic throughout this whole story and all stories that include quotes pulled from the internet), “and this is what you have to look like to get a reasonable amount of female attention from average and below average looking women.”

On the surface, many of BumblingBeta’s 24 other posts to r/dating look innocent enough, but his posts with conclusions like “despite equality, men are still expected to pay for women” illustrate how these aren’t the genuine ventings of a frustrated dater, but rather a strategic tactic in a massive red-pilled astroturfing campaign.

It also doesn’t take long to find BumblingBeta’s red-pilled compatriots defending him in the comment sections of his many posts to r/dating. In response to one post about women only being drawn to attractive men, a redditor commented: “Chadfishing is important to pay attention to because it reveals most women wont settle for less than perfect on OLD [online dating], and also totally change personalities (suddenly the ‘not here for hookups’ girl wants dick pics and a bondage session).”

Needless to say, weeding out guys like BumblingBeta from one of Reddit’s most popular subreddits is an exhausting endeavor. While some of the red-pill-baiting posts are caught by a bot Cameron created to automatically filter posts and comments that contain manosphere lingo like “Chad,” “Stacy,” “Cuck” and “Soyboy,” countless others still slip through the cracks.

Reddit also doesn’t allow moderators to ban users by their IP address, so Cameron says he and the other moderators are stuck in an unending game of whac-a-mole. “A significant portion of users we ban either immediately create new accounts to do much of the same or at least threaten it,” he says. “I’ve banned the same person for the exact same worded post over 20 times before.”

The obsessive, persistent nature of the attacks has made Cameron realize the extent to which the red-pilled crowd believes modern dating is futile — and how badly they want others to agree with them. “Dating is tough, there’s no question about that. The issue arises when men start to see the difficulties of dating as too large to overcome,” he says. “It’s way too common to talk to an incel and realize he has absolutely no confidence and has already admitted defeat, [but] whenever we try to explain a bit more about how and why we’re trying to take a stand against these mindsets, they just respond, ‘Didn’t read, don’t care. Going to create another account. See ya soon.’”

How these subreddits view neutral spaces like r/dating is evident in a post to the recently-banned Men Go Their Own Way replacement subreddit, r/MGTOW2, in which a user shared a screenshot of an r/dating post titled, “Dating Women Makes Me Feel So Expendable and Just Worthless.” 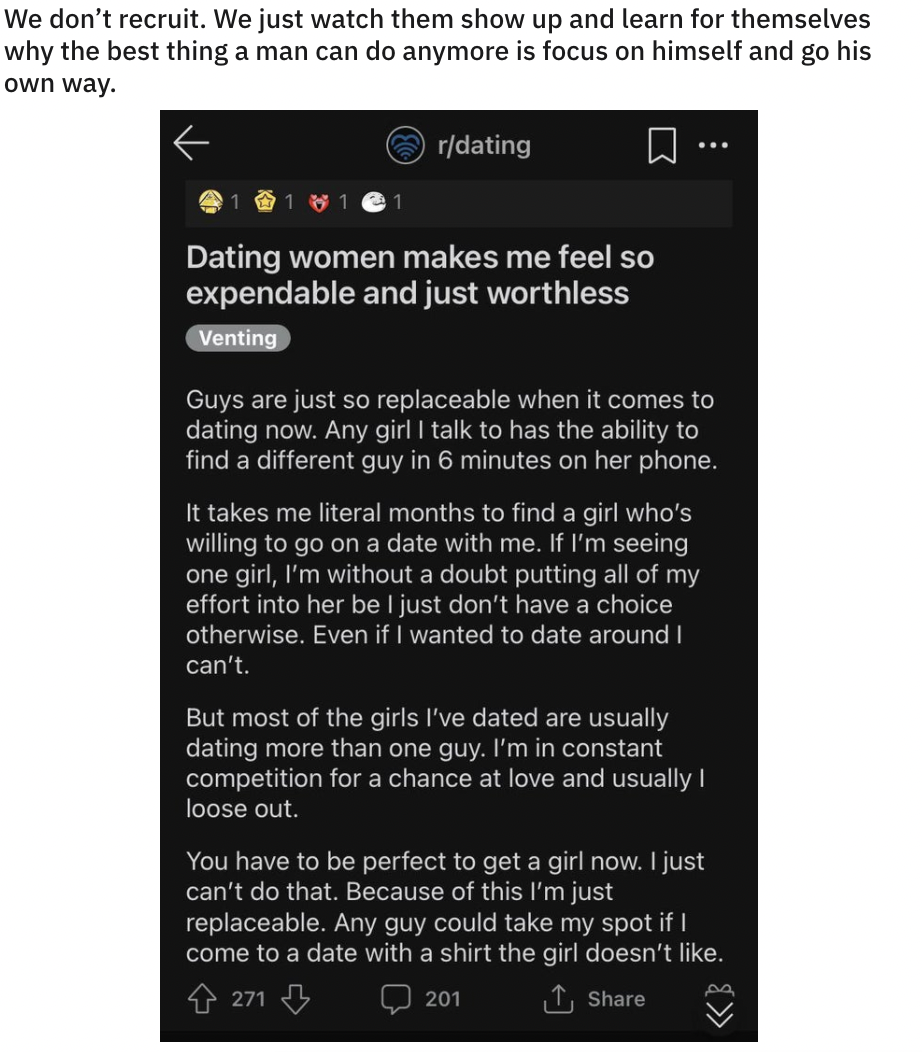 “We don’t recruit,” wrote the r/MGTOW2 user. “We just watch them show up and learn for themselves why the best thing a man can do anymore is focus on himself and go his own way.”

In a different instance, a founding member of the now-banned transphobic subreddit r/superstraight took to r/dating to ask, “why does nobody acknowledge female privilege when it comes to dating?” In the post, which attracted a higher-than-average number of comments for the subreddit, he wrote, “No wonder under 30 male virginity has tripled since 2010 and [the incel] community is on the rise.”

In response, Cameron and his fellow volunteers continue to whac-a-mole their way through the daily posts and comments in hopes of maintaining a space where users can just have candid conversations about dating. “My motivation was to provide a place absent that toxicity, to show people that there can be constructive and helpful dating advice,” former moderator Antidense says. “If you can provide hope to some people that they can eventually be happy in a relationship, that can be very meaningful.”

Thanks to the moderators’ work to keep r/dating from being overrun with misogyny and hate, the community doesn’t have to fear being shuttered by Reddit HQ, which has already closed down r/Incels, r/Braincels and r/MGOTW. Unfortunately, though, the moderators have also found that when extremist subreddits are shuttered, those members often find r/dating to be the perfect oasis to regroup and spread their ideology.

“Whenever a red-pill, black-pill or incel subreddit would get banned, a lot of those people would flood into dating-related subreddits,” says Antidense. “There might not be anything for a couple days, then, within a couple hours, there would be a ton of posts and comments complaining how women are all ‘plate spinners’ and only like really tall alpha men.”

For instance, in the days following Reddit’s recent banning of r/MGTOW2, the r/dating community was inundated with posts that, more than anything else, intended to mainstream the red-pilled notion that women are to blame for men’s dating failures, like: “am i crazy or are women more animated and talkative with guys they think are hot,” and “Online dating has shown me that I’m too ugly to find someone and I’ve given up on women.” Another post asks, “Why do subs like these look so much anti male? It’s like male shaming turned to a religion,” before the poster bemoans “male virgin feminists,” and argues that older men approaching younger women shouldn’t be seen as harassment. “[Older] men know that every once in a while they’re going to find one that will luckily suck them off, hence why they keep approaching,” they argued. “Stop confusing [incessant harassment] with normal daily human approach lol.”

As platforms continue to struggle to stop the spread of online radicalization and the spread of hate speech, Reddit arguably owes a debt of gratitude to the volunteer moderators and users who have so far kept some of their most popular communities from utter meltdown. “The self-policing of our community helps so much,” Cameron says. “I don’t know what it is about the anonymity of the internet and message boards, but people are harsh. Without its volunteer moderators and the rules we put in place, Reddit would be oozing with misogyny and not a fun place to be.”

At the same time, r/dating’s moderators don’t want the subreddit to become a place where anyone feels unwelcome to express their feelings and frustrations with dating. “To an extent, I can sympathize with incels or young men who are struggling,” Cameron says. “But the last thing we as moderators want is to repel single men and women who are looking for a welcoming place to discuss dating and all its troubles and merits.”