Youth is largely defined by a person’s yearning for myriad space-requiring activities. The younger you are, the more space you want for running around, banging on shit and running around some more. Which is why, chances are when you were young, your primary concern with regard to the feng shui of your bedroom was to maximize the surface area of your floor for activities. 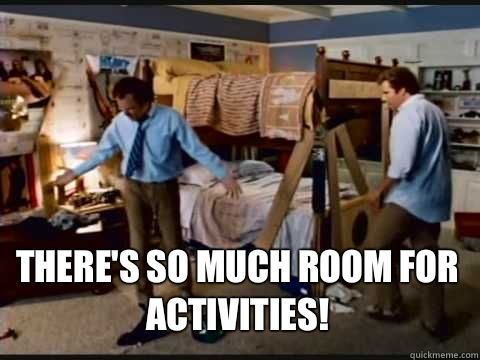 And perhaps, this yearning continued well into your 20s — after all, nearly 50 percent of millennials these days are still living at home with their parents. But then one day, you either moved out of your parents’ basement, or your need for creating a welcoming space for a fellow human being you were romantically interested in surpassed your need to have enough room to really play with your Hot Wheels the right way. During this tectonic shift in your coming-of-age journey, you did what you had to do: You moved your bed from the corner of the room, to the middle of the wall.

“You know you’ve reached adulthood when your bed is in the middle of the wall instead of in the corner,” wrote one redditor last year. While others noted that this change made it easier to make the bed — another consideration that isn’t likely top of the child’s mind — most redditors agreed that less extra space meant less activities. “But if I do that, where else am I supposed to have my temper tantrums on the floor?” asked one person.

To this end, the move from corner to wall as a mark of adulthood is a perfectly straightforward one: A corner bed implies you sleep alone, a middle-of-wall bed implies, hey, this guy fucks. Because if you’re planning on sharing the bed, you don’t want your significant other to have to crawl over your body every time they need to pee.

But is the center of the wall actually the best place for your bed? It really depends on the size and shape of your room. “If the floor plan is square, then it’s best to place the bed on the central axis,” Russian designer Julia Golavskaya told Today. “But what if the bedroom is a rectangle? Then it’s best to divide the room into zones, with the bed located in one zone and a chair and table in the other, for example.”

According to Russian psychologist Natalya Mikhailova, though, the perfect bed placement is a little bit trickier than just center of the wall versus in the corner of the room. “From a psychological viewpoint, it’s important to keep the bed as far as possible from the door while still making sure the door can be seen from the sleeping position. However, if there’s a window in the room, then you should be able to see both the door and the window at once from your bed,” Mikhailova told Today in the same article.

To that end, per The Spruce, to get the most feng-shui positioning for your bed, you need to first figure out the “commanding position.” The feng-shui commanding position is the area further from the door/diagonally from the door, but not in line with it,” writes Rodika Tchi. “In other words, you want to be able to see the door while you are in bed, but not be aligned with the door.”

It’s perhaps an easier decision to make if sex isn’t a desired part of the agenda. “In the corner, where else?” says one member on ASexuality.org when asked where they place their bed. “Of course it’s a single bed, less than a meter wide. By the way, apart from not having sex anyway: I absolutely hate sleeping in one bed with someone.”

Plus, now you’ve got more room for all your non-sexual activities.