Why, Exactly, Was Captain America Commanded to Wank? 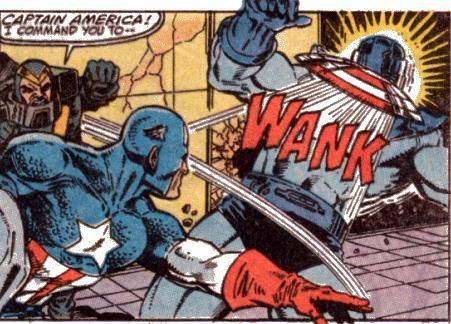 As Screenrant has previously explained, the context of the panel is that a villain named The Voice was trying to get Captain America to stop beating up a robot bad guy named The Controller. Just as The Voice is barking out orders, Cap whacks The Controller with his shield, which is where the “WANK” sound effect came from.

So far, so simple.

But outside of the context of the issue, I wanted to understand how something like this came to be. Who, in our own reality, commanded Cap to wank, and how did this kind of thing slip by the editors?

The answers, it seems, lie with the art of drawing and writing comic book sound effects.

Tom DeFalco — who’s been a Marvel Comics editor and writer since 1980 — was the editor-in-chief of Marvel Comics when Captain America #366 was published. “In 1990,” he explains, “it was probably the writer who would have written the sound effect. Certain artists would put in a sound effect here or there if they felt like it, but my guess is that it was probably Mark Gruenwald who wrote this, because Ron Lim, the artist, would sometimes add an idea for a joke or some dialogue, but I don’t remember him putting in sound effects.” So, most likely, it was the late comics writer Mark Gruenwald who actually commanded Cap to wank, and artist Ron Lim just carried out the order.

While I guess it’s possible that this was meant to be a suggestive reference by Gruenwald and/or Lim, most likely it didn’t appear dirty to anyone in the chain of command, which went from Gruenwald to Lim, then to the inker, the colorer and, finally, to the editors (which included DeFalco). The thing is, back in 1990, the word “wank” wasn’t in use much here in America — etymologist Barry Popik explains that it wouldn’t really be until the 21st century that we began using it a bit more.

To illustrate, I created this graph with the help of Google Ngram data, which searches publications through the years to see how often a word appears.

As you can see, Americans were barely wanking at all back in 1990. Our wank curve is a good 30 years behind that of the U.K., so it’s no wonder this sound effect slipped by unnoticed.

As it happens, this one panel wasn’t even the only time that sound effect appeared in the issue — “WANK” was also on the previous page of Cap #366.

The last question, really, then, is why “WANK”? Why was that the chosen sound effect? Well, as comics creator and instructor Scott Serkland tells me, “The cool thing about comics is that you’re not bound to the rules of grammar or anything, and when it comes to sound effects, I usually tell people to get really creative with it. Like, for something landing in water, you could write “SPLASH,” but “SPLOOSH” might be a little more interesting. “SPLASH” is okay, but you can find “splash” in the dictionary — you’re not going to find “sploosh” in the dictionary.”

When it comes to “WANK,” Serkland says he personally wouldn’t use that sound effect now, thanks to its masturbatory connotations, but he still thinks the sound effect is, well, sound. “‘WANK’ makes sense because it’s the ‘WHIRR’ of the shield plus the ‘CLANK’ of the metal-on-metal. So I understand why they chose that,” Serkland says.

When I ask DeFalco if there were any rules or methodology to sound effect choice or placement at Marvel, he says that there really weren’t and that, when it came to sound effects, the only guideline he got was that you really had to get into them. “I remember Stan Lee told me, ‘When you’re writing a script, you’ve really got to get into the sound effects, because sometimes you’ll put a ‘FATOOM’ in there when you really want to put a ‘BABOOM’ there,’” he explains.

“I don’t want to put myself in a class with Stan,” DeFalco continues, “but we both would get very passionate when we were writing our scripts. I remember saying to him, ‘Sometimes after I finish a script, I’m physically exhausted.’ This was because I was shouting the dialogue as I’m writing it and that sort of stuff. And we got into discussing the sound effects, and Stan told me that he’d often hit something to get the right sound effect and that he’d even hurt his hand a couple of times because of it.”

All of that enthusiasm — which includes sound effects like “SPLOOSH,” “BABOOM” and, yes, even “WANK” — is all part of what comics are about, Defalco explains. “People often misunderstand comics because they think comics are like movies. But, actually, we’re like theater and opera. Everything we do is big, grand gestures because we’re just two-dimensional pictures. With comics, we’re playing to the back rows.”

Even when it’s just a great big WANK.