Furious at the prudish Clinton administration, the creator of JackinWorld.com fostered male sexual health when no one else would — and built a Web 1.0 behemoth

On November 1, 1996, M.J. Ecker single-handedly changed the world. With a few swift keystrokes on his Macintosh Centris 650, the pseudonymous 30-year-old reached a hand out to the timid, the lost and the sexually confused. JackinWorld.com was born.

“It was an early example of cancel culture, and it pissed me off,” Ecker says. “I agreed with what she said, so instead of letting her and her message disappear forever, I started JackinWorld and dedicated the site to her.”

Instead of being shamed or condemned to hell, the internet’s curious masturbators finally had a place to feel safe. 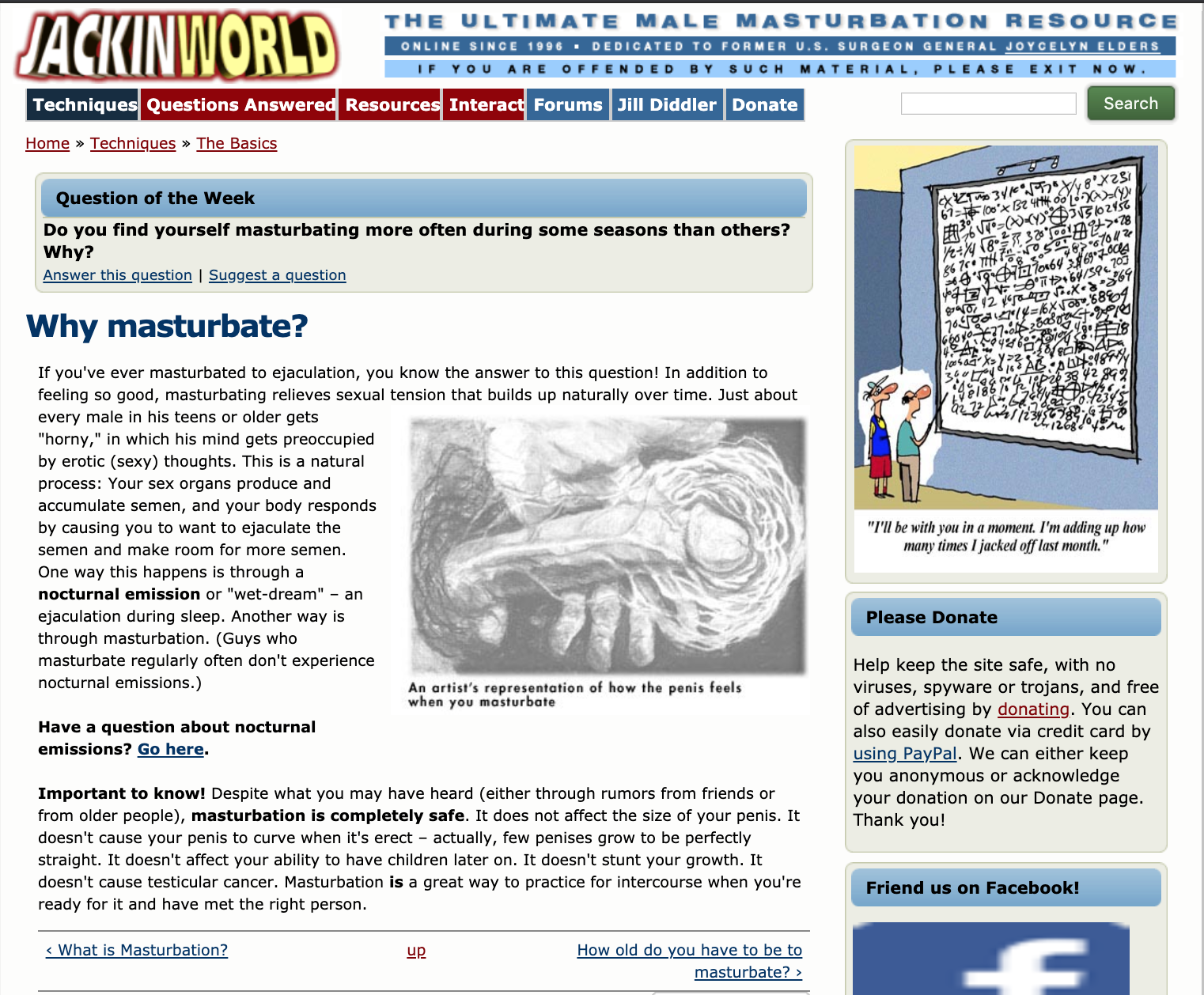 If You Build It, They Will Come

Within two weeks, Ecker says, JackinWorld exploded. He promoted the site on a few Usenet groups, and it didn’t take long before he was inundated with emails and search traffic. He admits he had no idea what he was doing, but he had to learn some SEO basics quickly. “For a while, JackinWorld was always very near the top, if not the top result, for ‘masturbation,’ and for some reason, it ranked near the top of Google for ‘male,’ too,” Ecker tells MEL. The search traffic alone ranked JackinWorld in the top 1,300 websites in the world, “according to an early version of Alexa,” and became too much for several internet service providers to handle.

“I was kicked off several ISPs because of the bandwidth. They’d just host your website and assume you’d be a run-of-the-mill local business, and if it crashed their server, you were eventually terminated,” Ecker explains. “Mind you, these were dial-up days, before any mobile internet — real Stone Age stuff.”

Ecker also made a point to keep all degrading and dangerous verbiage off the website. For instance, he says many users would ask about auto-erotic asphyxiation. “They’d heard about a way to enhance orgasm, and wanted to know more, [but] I decided as policy never to touch it,” he says. “If I explained it openly, they’d know how to search for it, and bad things could happen.”

A Stroke of Genius

Above all else, Ecker wanted to make sure everyone felt welcome and “happy with the skin [they’re] in.” He worked to maintain a vibe that was safe, informational and not so boring it’d turn its target market away.

He also refused to allow pornographic ads. Instead, Ecker set up a paid membership system in order to handle the site’s traffic. “JackinWorld was doing really well financially from about 1999 to 2002,” Ecker says. “I was selling memberships for slightly more access to things like user submissions for the ‘Question of the Week,’ and I had several freelancers getting a steady paycheck.

“It worked flawlessly, and everyone was happy,” he continues, “until it all collapsed overnight.”

In October 2002, eBay bought PayPal and changed PayPal’s terms of service. “There were to be no more fringe customers like gambling or pornography,” Ecker says. “They deemed my site pornography.” Ecker had to scramble to find a new credit card processor — “a nightmare.”

Eventually, he gave up. Managing various ways to keep the website above water became too much to handle, especially on top of a full-time job (he worked as a magazine editor until 2003), and he handed the JackinWorld keys over to an early user who offered to host the site for cheap.

Looking back, Ecker is acutely aware of the unique situation he stepped into. “The site was stuck in a weird crack between a print magazine and the peer-to-peer, instantaneous communication of social media,” he says. “I joke about the internet losing its innocence, but back then it was just a decentralized patchwork of ugly webpages. Once major corporations took over, everything got homogenized.”

But the old internet’s ugly, clunky disconnectedness allowed comparatively small communities like JackinWorld to thrive. Unlike today’s massive forums, Ecker says, his site never saw problems from the toxic communities we know all too well today. “I can’t say I remember any type of incel culture,” he says, “and I think the toxic movements are more prevalent today because the more extreme voices are amplified by the huge social media platforms, though I did have one user who sent me long emails about not letting me corrupt his younger brother.”

Nevertheless, Ecker has long since removed himself from JackinWorld. “I wonder what all of those people who loved JackinWorld remember about that chapter of their lives. Where did they go?” he says. “But I could die now and know that if only for a brief window, JackinWorld was able to influence a ton of people all over the world for the better — and that’s pretty gratifying.”

You gotta hand it to him.