How Often Can You Take Shrooms?

When it comes to shrooms, too much of a good thing is an actual thing

You’d always avoided psychedelics because you were scared of a bad trip, but you finally caved: You gulped some shroom tea, met God and loved every moment. Now, you’re ready for another go. But, how often can you do shrooms?

There are a few things to consider before taking another trip. For starters, Mitchell Gomez, executive director of DanceSafe, a public health organization that promotes safety among nightlife and electronic music communities, says, “Psilocybin tolerance builds pretty quickly.”

Likewise, if you were to try and take shrooms a few days or even a week after another hallucinogenic journey, Kevin Franciotti, an addiction counselor in Colorado, says, “The dosage required to trip gets so high you’d have to ingest massive amounts.” He adds, “This is also why proponents of microdosing advocate for not even taking the sub-perceptual doses too many days in a row.” (Microdosers typically only ingest shrooms a couple times per week, at most, and take frequent tolerance breaks.)

Specifically, here’s a chart from Shroomery, an online magic mushroom forum, which shows that you should stay sober for at least a week or two between trips in order to experience shrooms fully: 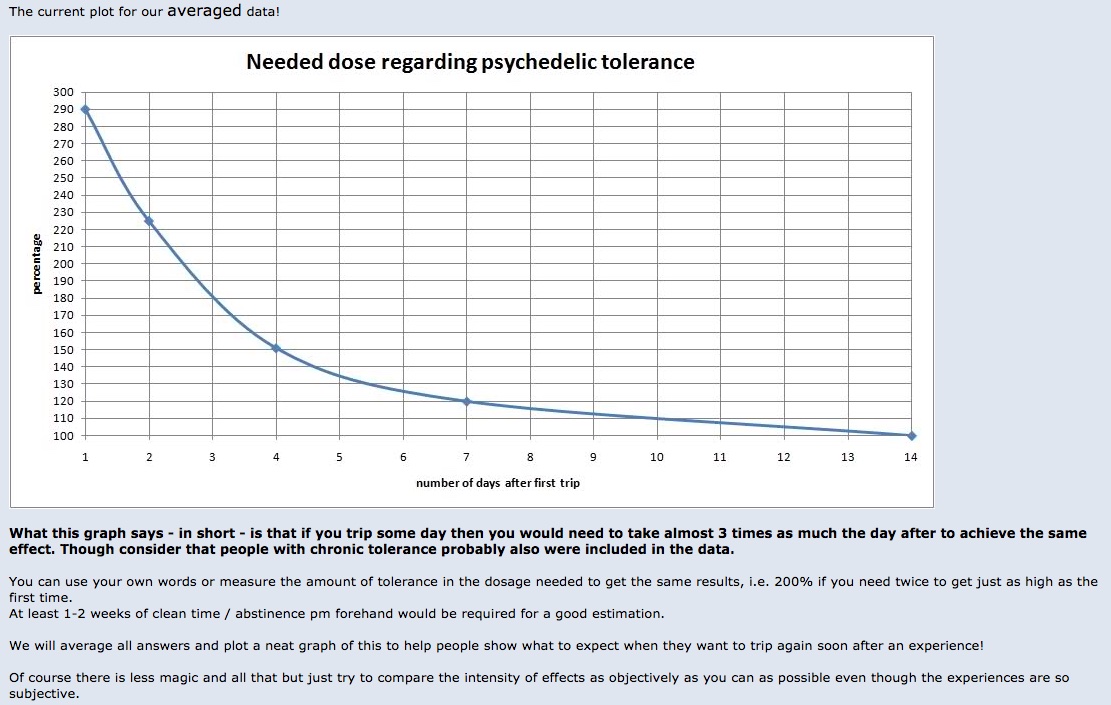 As you can see, if you were to attempt consecutive daily trips, you’d need to take three times your last dose to experience similar results, and that amount goes up and up and up.

For a more psychological standpoint, Gomez explains that making sense of your experience usually takes even longer than a week or so, and taking shrooms again before you’ve accepted your last trip could spur a bad time. “I’ve seen plenty of people have difficult experiences because they didn’t fully integrate their last [trip],” he says. Or as Franciotti puts it, “Tripping hard definitely requires recovery time.”

Of course, you’ll also want to consider how your shroom use is affecting your life. To that end, Franciotti suggests checking in and asking yourself a few questions every now and again: “Am I avoiding socializing during my leisure time because I’m spending my weekends holed up in my closet on five-plus grams? Have I called out of work so often that I’m risking losing my job?”

But again, because of the diminishing returns when used often and the need for integration, most people wouldn’t even want to use shrooms frequently enough to where they’d negatively impact their daily life. “You can’t be a functioning adult with responsibilities and do shrooms as often,” a frequent mushies taker on Quora says. “It’s exhausting.”

Speaking more spiritually, English writer, philosopher and psychedelics experimenter Alan Watts famously wrote, “When you get the message, hang up the phone. For psychedelic drugs are simply instruments, like microscopes, telescopes and telephones. The biologist does not sit with eye permanently glued to the microscope; he goes away and works on what he has seen.”

Again, his suggestion is that you take time to reflect on your trips, rather than going back again and again for more.

As science on the use of shrooms as therapeutics continues to develop, medical communities seem to agree with this sentiment. For optimum results, Joe Flanders, licensed psychologist and vice president of Numinus, a psychedelic research and therapy company, says, “Some people talk about it more like surgery than an ongoing, open-ended psychotherapy.” What he means is that research shows the most promise when psychedelic-assisted therapy patients take larger doses just a few (two or three) times, spaced out and followed by integration therapy. “It’s an intensive intervention,” he adds.

Moreover, because shrooms have the potential to change your brain chemistry (for better or worse), taking them too often puts you at a higher risk for permanent adjustments up there. This isn’t necessarily a bad thing — shrooms seem to be helpful for many psychological disorders, from depression to PTSD — but if you’re using them will-nilly, you may be playing with fire.

All of this is to say, shrooms are like anything great: The more you take them, the less you appreciate them. So maybe give yourself at least a couple weeks before you dive back in.