You’ve pledged your loyalty to Sweet ’n Sour. I’m a Honey Mustard gal for life. So I slammed packet after packet to uncover why American identity is so wrapped up in McDonald’s dipping sauce

A confession: When it comes to fast food, I’m not a sauce gal. My apologies to readers who thought they knew me better. It feels lightly, unpleasantly taboo to have basically no opinions on fast-food sauces, except that I don’t care for most of them and would rather eat my nuggets and fries dry. Yet sauces are the aspect of the fast-food experience to which eaters seem most aggressively attached; to feel nothing for fast-food sauces is to understand nothing of love, desire, yearning.

What is it about fast-food sauce that inspires such deranged loyalty? Why did the creators of Rick and Morty devote so much time and energy to getting their hands on a handle of McDonald’s Szechuan sauce, a not-very-good condiment that hasn’t been available since 1998? Likewise, why are six packets of Taco Bell’s discontinued verde salsa available for purchase on eBay for $10? 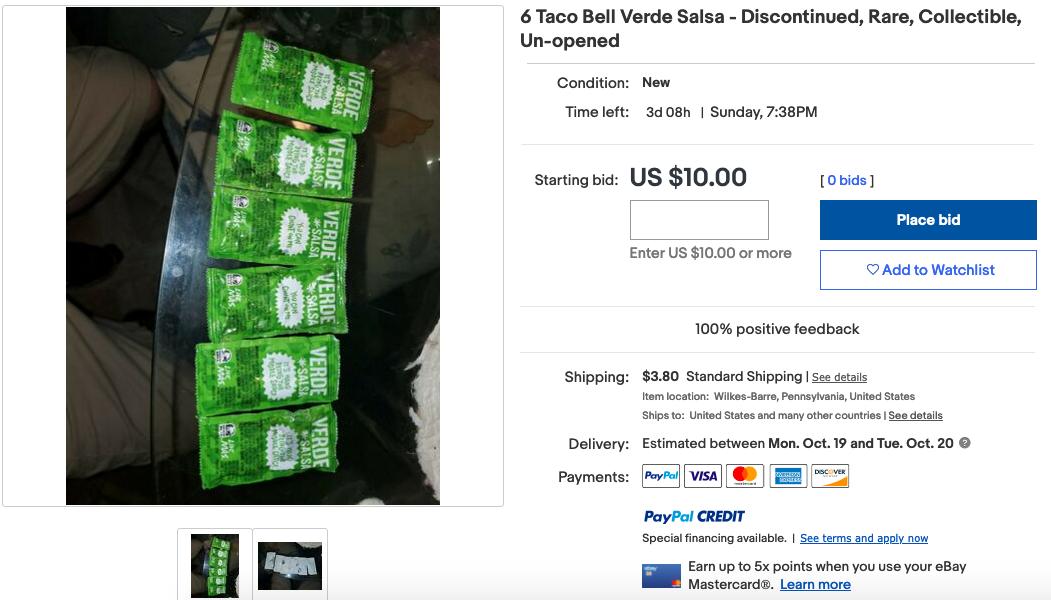 In an effort to get to the bottom of consumers’ bizarre affection for their preferred fast-food sauces, I spoke to my dear friend and former McDonald’s crew member Lohla Jani, who accepted my frantic midnight sauce-texting with much more grace than I could have hoped for. (She wasn’t surprised. Being friends with me does entail receiving a decent number of frantic late-night texts about McDonald’s.)

I decided to focus my efforts on McDonald’s signature sauces for a couple of reasons. First, McDonald’s is arguably the 20th century’s most complete and significant fast-food project in terms of sales and customer base. Though the 2019 Nation’s Restaurant News Top 200 tells us that McDonald’s now has fewer locations than Subway and Starbucks, its sales remain higher (this despite the fact that its menu items tend to be cheaper). Second, for millennials, the sheer gravitational pull of the memories we built at various McDonald’s establishments make it hard to judge their food objectively. Which is the attitude I’m chasing, but about fast-food sauces rather than fast food in general — that is, devotion on the level of muscle memory, rather than due to quality or genuine love of the food.

Admittedly, though, aside from the fast food fries tour that I took for MEL last month, I hadn’t eaten McDonald’s since college. (I find that phrasing so interesting: “eaten McDonald’s” or “eaten Taco Bell” rather than “eaten at McDonald’s” — as if the very place is the thing we’re consuming, and not the food it sells.) Yet when I found myself at that counter again for the first time in so long, my mouth knew to say “Honey Mustard” when asked what sauce it wanted with its Chicken McNuggets. Did I even want Honey Mustard, or was it just a taste I knew from childhood? Hard to say. But then I had to awkwardly go back on my request and say, “Actually, please give me one of each sauce, it’s for journalism and I’m sorry.” The cashier looked at me with mild disdain, and long story short, I can never go back to that McDonald’s.

I took my bounty home and surveyed it, not unlike a bank robber dumping their satchel of cash ostentatiously onto the bed after a successful robbery: 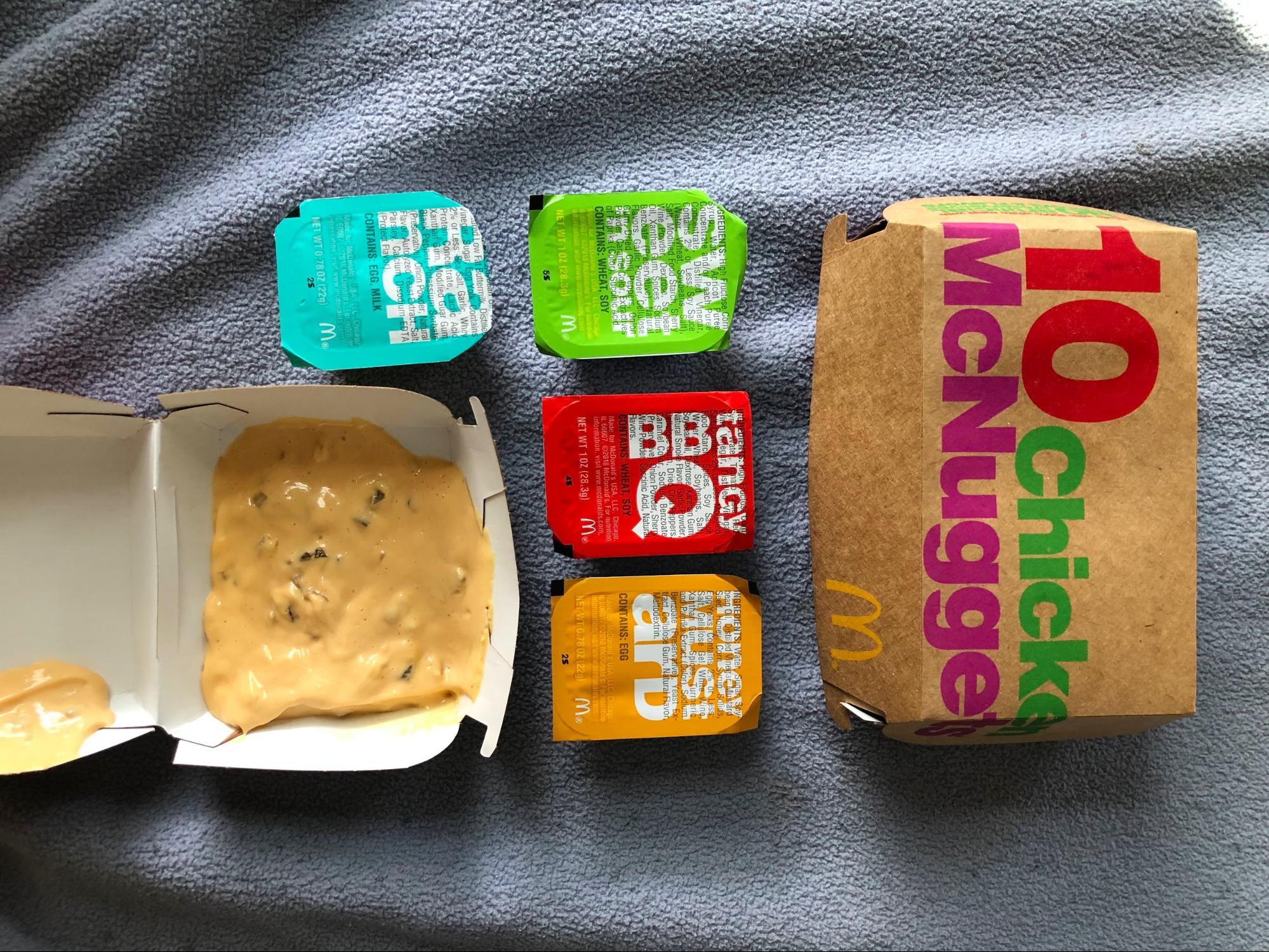 There’s something so pleasing about that picture, no? I mean, aesthetically speaking, I could do without the box of loose Big Mac sauce, but I understand that strange requests require strange innovations. I won’t lie: Staring down at my McNuggets and my vast array of sauces, I felt like a baller. And “like a baller” is not a way that I get to feel regularly. “Like an asthmatic goober,” sure.

McDonald’s lists 11 “sauces and signature dressings” on its website. Three of them are ketchup, mustard and mayonnaise, which you will never convince me are different anywhere. I’ll grant that homemade mayo has some irresistible charms about it, but it baffles me when people try to build a better ketchup or mustard, considering that Heinz and French’s already cooked up perfectly serviceable versions in their laboratories or whatever. In any event, that leaves eight sauces, all of which are (if consumers are to be believed) special in their own way.

By my count, then, that left me with five sauces to sample and talk through with Lohla.

The official story of Big Mac Sauce is weird as hell. It was invented by a franchisee, and its recipe was tweaked a few times before landing on today’s sugar remoulade version. Over the years, Big Mac Sauce has been repeatedly accused of being Thousand Island dressing, which it may very well be. All I know is, it tastes perfectly adequate on a salty, crispy Chicken McNugget. “We love her. A classic,” says Lohla. “Experts know to request it on their McDoubles.” Go forth and order like an expert, babes.

Before I embarked on this sauce journey, I consulted my friend Devin. He warned me that this barbecue sauce was way too tangy. I ignored him; the word “tangy” is right there on the label, and I believed myself to be an adult woman, capable of handling myself in the presence of even an awful lot of tang. I was wrong. This shit is inedibly tangy. On the tip of my finger, it tastes as if Sweet Baby Ray’s had a mean-spirited big brother. On a Chicken McNugget, it marched angrily down my throat, dragging all that chicken and salt behind it. No, thank you! 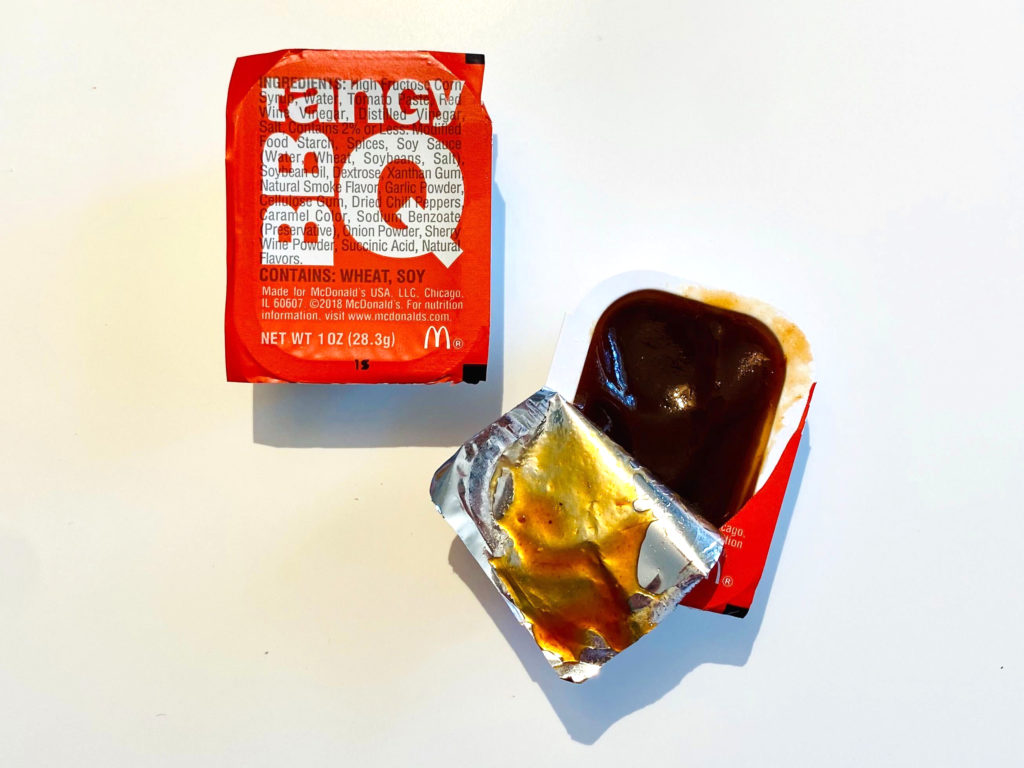 Imagine my surprise then upon hearing that barbecue sauce is by far the most popular. Have I fallen out of touch with the tastes of America? “I have an irrational hatred for Tangy Barbecue because Honey Mustard is also called ‘Tangy Hnymu’ [on the point-of-sale system],” Lohla says, confirming that Tangy Barbecue can and should go fuck itself. “So it’s the sauce you’re most likely to get served by mistake. To me, it’s the default setting of McDonald’s sauces. It’s like playing Mario Kart as Mario.”

I’ve never liked ranch. I’ve encountered it hiding among platters of crudites, coating Doritos, taunting me by not being the far superior bleu cheese dressing with my buffalo wings, and sorry, it sucks. Looks like semen, tastes like the devil. I wasn’t looking forward to this one at all. 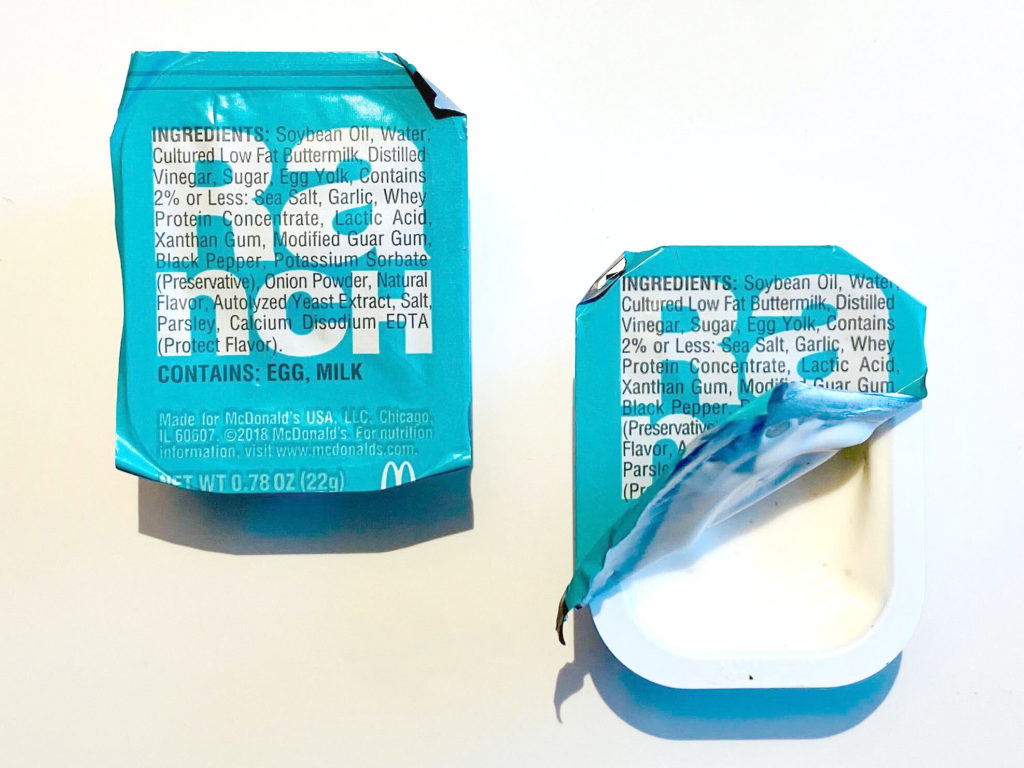 And it was goddamn delicious. I’m so angry! All my life, I’ve proselytized the virtues of ranch abstinence, only to be made a fool and a knave by one measly blue packet of ranch. By itself or on a McNugget, it’s tart and enticing, lending the barest hit of acid to an otherwise salty food. “People are pretty polarized about Creamy Ranch’s sourness, but it adds some much-needed dimension to the ranch flavor for me,” Lohla says. “It was definitely second-most popular after barbecue.”

As mentioned earlier, Honey Mustard has historically been my favorite dipping sauce for chicken nuggets, tenders and whatnot — basically any form of fried chicken that doesn’t pretend to resemble the bird from which it was culled was built for Honey Mustard. The tartness of the mustard benefits from the honey’s sweetness, and it all goes harmoniously with salty fried chicken. Maybe I was still riding the perplexing high of the ranch, but I found this Honey Mustard disappointingly bland. Aside from an overwhelming note of sugar, it didn’t taste like much of anything. 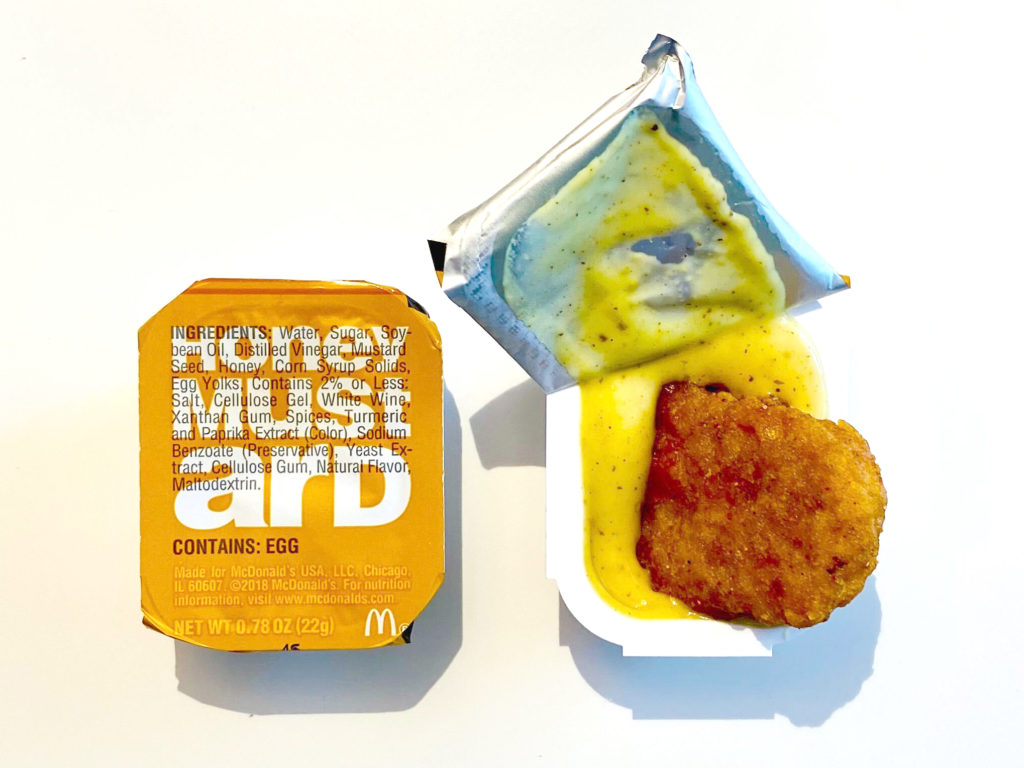 Lohla’s going to be really mad at me when she reads that paragraph. “God tier. The platonic ideal of mustards. Chicken McNuggets are simply the truest vessel for God’s gift to fast-food sauce,” she says. This is her Homeric invocation to the gods. “Between breaks, we used to do little shots of sauce as a quick calorie boost, and that’s when I truly knew ‘tangy hnymu’ was the one. You can’t come back from having that depth of a relationship with a sauce.” Fair and reasonable!

What sour? This is just sugar with a minimal kick to it. I’d believe it if you told me the recipe for McDonald’s Sweet ’n Sour was just mutilated peaches and black pepper. 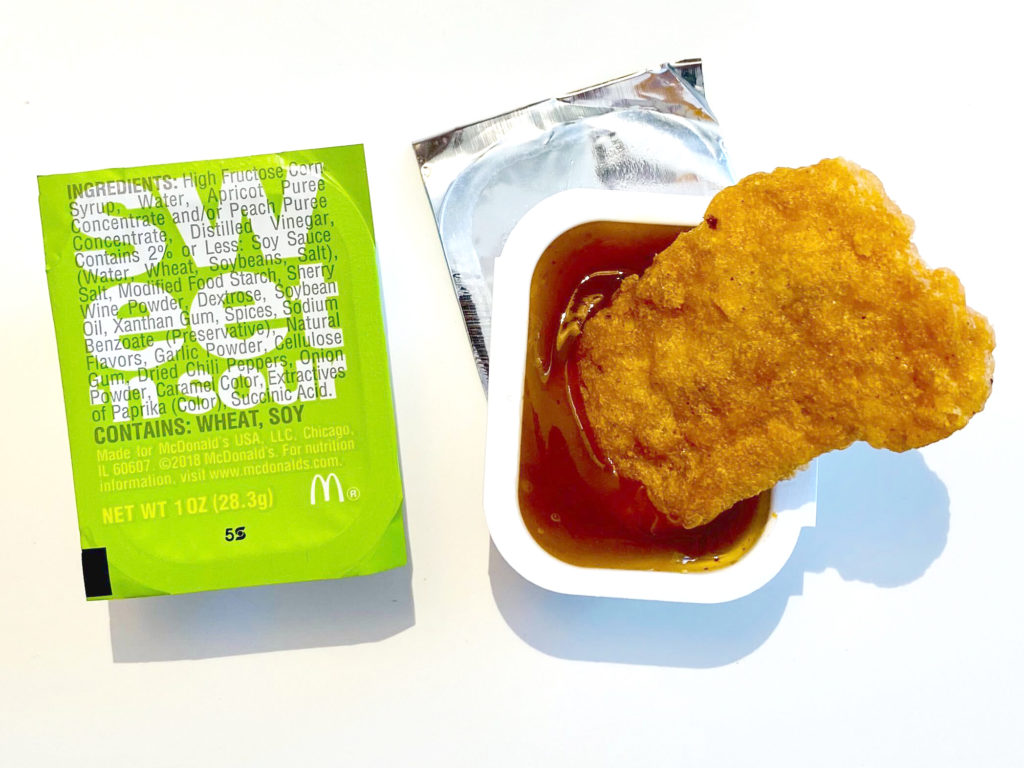 Weirdly, though, this is the sauce that seems to inspire the most loyalty in people who eat McNuggets regularly. I remember going to McDonald’s for the first time as a little kid with my friend Allie, who coached me through my order of a four-piece Chicken McNuggets with fries and a chocolate shake. When it was time to pick a sauce, she ordered Sweet ’n Sour for me, and then said, “Trust me.” We were 5.

I don’t remember many details about those early McDonald’s trips, but I distinctly remember hating the Sweet ’n Sour sauce. It was too sweet for me even then, when I was an American kid with an American kid’s shitty palate. But for some reason, before I tried it again as an adult, I didn’t remember the nastiness of the sauce’s taste. Instead, I remembered having it selected for me, and how confident Allie was in the selection. Like, any friend of hers would have to be a friend of Sweet ’n Sour sauce.

It was foul then, and it’s still foul. I’m sorry to the 43 percent of Twitter users surveyed who preferred Sweet ’n Sour to Honey Mustard. To me, these are the two emblematic sauces of the chicken-nugget experience — Honey Mustard because of its omnipresence even outside McDonald’s, and Sweet ’n Sour because its users are so devoted, despite there being fewer of them. Even Lohla had to give some props to this beloved slurry. “I appreciate people who go for Sweet ’n Sour: They like to go off the beaten track, but they have respectable taste,” she says. “Probably my second-favorite sauce overall.”

So, what did we learn? Specifically about humanity and our role within the larger community of sauce eaters? Here, I defer to Lohla, who proves once again that you can’t beat a poorly paid job in food service for an education about what people are like. “The nuggets or other dippable items are just the vessel, the blank canvas, and the sauce is where people are making an emotional choice about their identity,” she tells me. “It’s like a self-expression thing, like Hogwarts houses for people who have a couple bucks and could probably go for a snack right now. Some people like to be the insider who knows the hidden gem; some people like to tell the world with their sauce order that they’re open-minded and unique (for someone eating at one of the most widespread and popular restaurants in the world).”

That parenthetical is the crux of the issue for me. We make our sauce selections into these weird shibboleths that correspond to a person’s character and trustworthiness, but it’s just a sauce, and a mass-produced sauce at that. These aren’t even foods we’re making. Someone else, or more likely a team of someone elses in factory gear, made these sauces for us. But we now burden them with our expectations for ourselves, a small piece of the larger consumerist project that is finding a product to correspond to every aspect of our identities.

The perfect example: Despite my newly discovered distaste for McDonald’s Honey Mustard, Lohla and I both remain fundamentally Honey Mustard gals. As she puts it, “Honey Mustard people emotionally need everyone to know that we have the best taste and correct opinions.”