France Spawned the ‘King of Incels,’ But Today’s ‘Francels’ Are Going Unseen

Incels are notoriously irascible, but they seem to be particularly so toward ‘Francels,’ who can’t quite seem to find footing among the internet’s bitterest men

In 1994, French novelist Michel Houellebecq wrote about a young, woman-hating dude — known only as “Our Hero” — who believed the Swinging Sixties created a system of “sexual capitalism” that doomed ugly guys to eternal, celibate misery.

In the opening chapter of his debut novel Extension du Domaine de la Lutte (Translation: Extension of the Domain of Struggle), the lead character goes to his co-worker’s house party. There, he hatefully watches a “stupid bitch” strip down to her “skimpy panties” and “twirl around” even though she doesn’t want to fuck anyone, “which only underlines the absurdity of her behavior.” Frustrated and tipsy, the character vents to his co-workers, who take the feminist stance that “she had the perfect right to dress as she wished.” This wasn’t, of course, the response he was looking for. In his eyes, her striptease exemplified “the last dismaying dregs of the collapse of feminism.”

At the time, Houellebecq’s “hero” would have been written off as little more than a misogynistic asshole. But viewed retrospectively, it’s the tale of a bona-fide incel, a guy whose chronic inability to get laid makes him a danger to himself and others, especially women. Not even psychotherapy can help him — after checking himself into a “rest home” and telling his psychologist he hasn’t had sex in two years, “Our Hero” asks to fuck her. She declines, assigning a new, male psychologist to his case instead.

Yet despite Houellebecq being retroactively crowned as the “King of Incels” on the r/MenWritingWomen subreddit, today’s French incels — also known as “Frenchcels,” “Francels” and “baguettecels” — are struggling to find each other online. The one definitive French incel forum that existed — Francels — has seemingly been shut down. As a result, there’s been a growing number of incels on sites like JeuxVideo (a gaming forum) and AveNoel, but they aren’t exactly welcome there either. Many aren’t even welcome on incel-specific sites.

In 2019, an unnamed 29-year-old logged on to Incels.net, a notorious incel forum, to cuss out his American dad’s “crazy French feminist wife,” as well as the abundance of “cucked bluepilled normies” — i.e., liberal dudes who respect women — in his new home city of Paris. (He had lived in the French countryside for 20 years before relocating for work in 2018.) In his post, he pleads for other Frenchcels to get in touch and share their tips on “how to cope and live in our horribly cucked feminist country,” but almost no one replies. One of the only responses encourages him to become a “hero” — a reference to Houellebecq’s nihilistic, woman-hating protagonist.

Unlike American or British incels, whose comments and cultures have been dissected in detail and splashed across global media, French incels are comparatively invisible online. To find any details of their lives involves sifting through page after page of racist, homophobic and xenophobic slurs on sites like Incels.net, and even then, it seems the French are cast out. In 2019, a 20-year-old took to the site to share his story of falling in love with a 26-year-old Korean woman set to move to France and study at his university. To get closer to her, he spent a month teaching her French online, before confessing his feelings and being unceremoniously shot down. His response was to “create dozens of accounts to insult her. I scared her so much that she disabled everything except Instagram, but she made her account private,” he wrote.

But instead of feeling connected to his incel brethren by sharing his story, he just ended up being berated by bros who call him a “cucked nice guy” for giving free French lessons. “Get the fuck out clown and come back when you grow a pair,” one guy responded. Incels aren’t exactly the friendliest bunch to begin with, but for whatever reason, French incels don’t seem to inspire much sympathy from their own.

You can see some of this in the 2012 documentary, Jérôme, 27 ans et Puceau (Jérôme, the 27-Year-Old Virgin), which shows how inceldom was framed before guys like Elliot Rodger went on headline-worthy killing sprees. In the 23-minute documentary, Jérôme — a standard-looking skinny guy with a gap between his front teeth and thinning hair — is set up with a smooth-talking “pick-up artist” who tries (and fails) to get him laid. Whether he’s planting a non-consensual kiss on an unsuspecting bride-to-be or shaking his butt to a karaoke rendition of Britney’s “…Baby One More Time,” Jérôme is framed as an unthreatening, adorable loser.

There’s no indication that he’s misogynistic, but the documentary’s treatment of him as a laughing stock is pretty brutal — in one scene, he stands awkwardly in the streets of Paris as random women are encouraged to pick his appearance apart. When incels discuss him online, they simply call him a “gay” “fakecel” (a fake incel) and attempt to track down his Facebook profile, to no avail.

More recently, a guy named Auguste — a new French YouTuber who uploads rant videos about his romantic failures — has become a recent target for incel forum posters, who complain he’s too handsome to be a “real” incel, and that his accent alone would net him endless pussy outside of his home country.

None of this is to say that there aren’t some French incels gleefully skipping about Incel Land. It’s just that they’re seemingly small in numbers, and if anything bands them together, it’s their dismissal of each other (which is so very French). In the end, then, the French incel king — Houellebecq’s “hero” — still appears to be the most prominent one. Let’s just hope it stays that way. 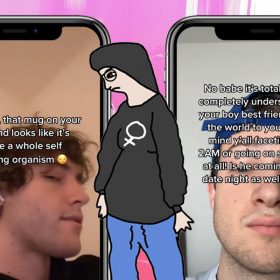