How to Check Your Drugs for Adulterants

You may need a new dealer after reading this

Our priorities are more than just a little messed up. We won’t eat anything unless it’s non-GMO, blessed by a shaman and charged under a full moon, but we’ll brazenly inhale a random pouch of powder from some guy named Rodney (hope you’re well, bud).

Considering the tremendous amount of adulterants out there, we should really be applying that same prudent energy — which, it’s totally fair to be skeptical about your food — to drug checking, also known as reagent testing. Not sure how? Drop that rolled-up dollar so we can see if Rodney’s being honest.

How Does Reagent Testing Work?

“At-home drug-checking kits are usually comprised of reagents, which are little bottles of usually sulphuric acid that are corrosive, so don’t get them on your hands, and if you do, you should be really mindful about washing them,” says Rachel Clark of DanceSafe, a public health organization promoting safety among nightlife and electronic music communities. “In order to utilize the kits, you can almost never use just a single reagent.”

That’s because different reagents test for different adulterants, so one only provides a small window into what your drug may be, whereas multiple can give you a more comprehensive scope of the adulterants in your goods. “Every one of those reagents reacts with a different set of colors to a different set of drugs,” Clark explains. “For instance, the Marquis reagent, which is probably the most well-known, turns black in the presence of MDMA and also MDMA-like substances, like MDA and MDE.” (If you have a drug of choice, DanceSafe sells kits containing the reagents that are most useful for certain drugs, such as cocaine, MDMA or LSD.)

Here’s an example of what testing a drug should look like:

The idea, then, isn’t so much to expose the purity of your drug, but to spot anything abnormal. “A lot of people will look at a drug-checking kit, and they’ll say, ‘Okay, cool. All I need to identify that I have MDMA is one Marquis reagent. I drop a drop of the reagent on it. It turns black. I’m good to go.’ But that’s not quite how it works,” Clark says. “We want people to use these kits as a means of basically saying, ‘Is this reacting in a way that’s surprising to me?’ An example of how that could be useful is if you have a pressed pill that was sold to you as MDMA, probably referred to as ecstasy, and it turns orange on the Marquis test instead of black.”

You can check out some of the more common reagents, what substances they detect and which colors to watch out for down below. 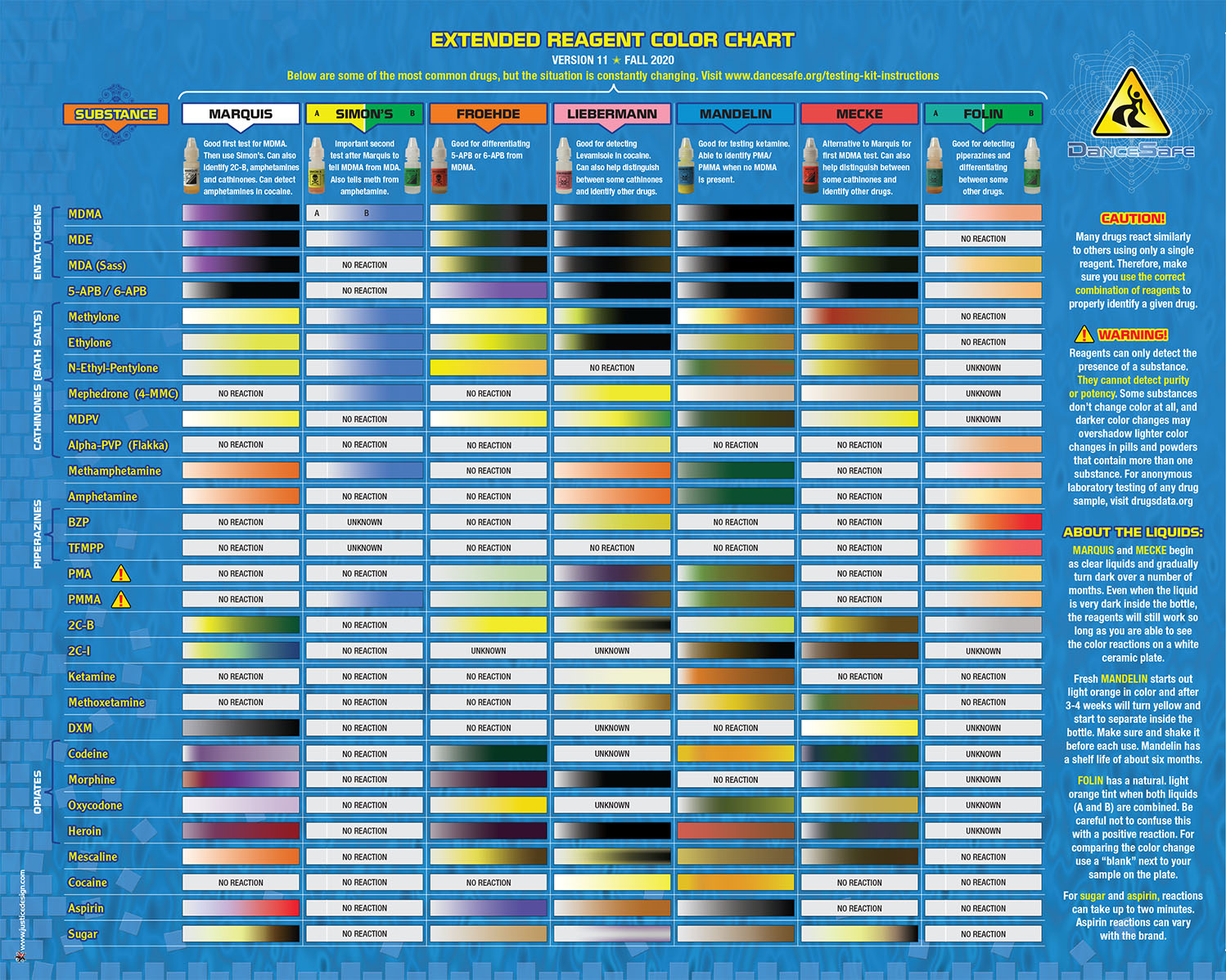 Keep in mind, however, that reagent testing isn’t bulletproof and is primarily aimed at detecting the more common adulterants on the market. “You could never keep up with the speed at which new substances are coming across the board, so there’s always going to be a limit to reagent testing,” says Stefanie Jones, who runs the Drug Policy Alliance’s “Safer Partying” campaign.

Won’t That Waste All My Drugs?

I Know Drugs Pretty Well. Can’t I Just Spot a Fake When I See One?

Nah, bro. There are just too many adulterants out there, and new ones enter the market all the time. “You’re never going to be able to positively identify a substance by looking at it, tasting it or touching it,” Clark says.

It doesn’t have to be. Sure, taking random drugs might feel exciting in the moment: “It’s a bit glamorized to face-check your substances,” says Clark. “There’s kind of an adrenaline rush, a social-danger culture around it. It feels good to have a batch of drugs with your friends, and for all of you to hold hands and jump into the pool together. ‘We’re All In This Together’ from High School Musical starts playing.”

However, as Clark soberly points out, “The least sexy thing is being dead, and truthfully, that’s not an illegitimate concern, because the substance market is so adulterated at this point in time.” In fact, she says, “There are hundreds of novel psychoactive substances on the market right now.”

How Do I Get My Friends Into It?

“It can be really useful to effectively establish this as a group activity, as a bonding experience even, where you can collectively get around the table, pull out the substance and put little dots of it on a plate, and collaboratively, together, identify what might be in it,” Clark suggests. She even recommends going in on a full reagent kit with your friends and perhaps designating a testing house as well.

Do Reagent Tests at Least Last a While?

They sure do! “Typically, reagents will last between a year to a year and a half if they’re stored in a cool, dry place, and that shelf life is drastically extended if you store them in a freezer,” Clark explains, adding that you should be able to perform between 50 and 150 tests before one runs out.

“The history of drug checking is that it kind of evolved out of the rave scene, and even reagent tests are oriented toward the substances that are most commonly used in that scene, like MDMA, stimulants and psychedelics,” Jones explains. “In heroin-and-opioid-using communities, adulteration wasn’t really part of the conversation that often.”

However, that changed when fentanyl began being produced very cheaply and making the news. “People started dying of overdoses within the heroin-using community, and it became a really big issue,” says Jones. “Fentanyl test strips came from people who were in the heroin-using community, and they wanted a way to find out if fentanyl was in their substance.” So, they repurposed urine test strips to be used to detect fentanyl, which is why they now come in strip form as opposed to a drip-reagent form.

Isn’t There a Better Way, Though?

I know, it’s all kinda complicated, and that’s in part because many states include drug-checking equipment in their paraphernalia statuses (reagent kits are something of a legal gray area), which prevents companies like DanceSafe from publicly performing more reliable testing. For instance, there are machines that are capable of performing much more accurate testing, but using them at, say, a music festival would currently trigger a police response in many states. “That’s ultimately the kind of drug checking that we believe should be in all communities,” Jones says.

And you — yeah, you — can help make advanced drug testing more available. “Get involved with drug policy reform efforts that would make these drug-checking kits more accessible and also encourage the use of higher-level technology,” Jones emphasizes.

But for now, we’ll just have to make do with what we’ve got.