‘It’s an expensive, powerful drug that lots of poor people are getting hooked on. I had a girl steal from me to get high, then I had to save her life when she went out.‘

Back in August, singer Demi Lovato’s friends reportedly revived her with Narcan, the pricey brand-name nasal inhalant version of naloxone, a drug that reverses opioid overdoses. Shortly after, I spent some time with those most familiar with the lifesaving antidote: drug users themselves. In particular, I hung out in a parking lot behind the Los Angeles LGBT Center in Hollywood, where, twice a week, the L.A. Community Health Project (LACHP) operates a mobile needle exchange and naloxone distribution center. I learned that drug addicts were far more likely than first responders to save each other with Narcan, since they were often actually shooting up with the person turning blue.

Michael, for example, a 37-year-old skateboarder, told me that he and his 20-year-old fiancée Kirsten kept two hypodermic needles loaded with Narcan in an empty Don Julio tequila box just inside the front flap of a burgundy tent they called home near the Egyptian Theater in Hollywood. They weren’t heroin users, but most of their friends were, so they felt it was their duty to be prepared should someone require it.

To see how he and Kirsten are doing now — four or so months since we last spoke — I recently went out to look for them again. I found Michael perched on Selma Avenue, a few blocks away from his former plot, and asked if that was Kirsten’s foot poking out a yellow REI tent. “Nah, bro,” he responds with a deep sigh. “Kirsten said she wanted to go in a different direction and split. It’s been a rough few months. I’ve never fallen for someone so hard and fast. She broke me.” 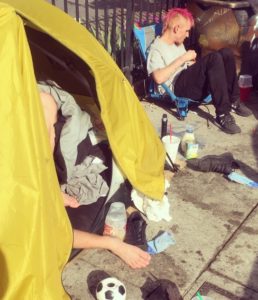 I’m invited to join Michael and a few of his neighbors seated amongst a swarm of flies on the sidewalk, popping a squat next to Arsh, a skinny, hard-to-understand Irish man. When I ask Michael if he still keeps Narcan on hand, he promptly reveals two vials tucked inside his backpack. In fact, everyone in the circle has a naloxone stash within arm’s reach.

“Fentanyl has exploded over the last year,” says Lisa, a 30-year-old Native American woman. “That’s causing insane things to happen because it’s an expensive, powerful drug that lots of poor people are getting hooked on. I had a girl steal from me to get high, then I had to save her life when she went out.”

“I hit someone two days ago,” Arsh proudly exclaims. Like Michael, he’s a meth addict, but sits on “nod watch” whenever he’s with his “heroin homies,” checking pulses. “This guy decided to shoot fentanyl for the first time,” Arsh explains. “Took one hit and bam, OD’d. Luckily my homie had Narcan because I always hound him to keep it on him.”

Arsh, Michael and hundreds of other homeless drug addicts are able to maintain their Narcan inventory thanks to Michael Marquesen, Director of the Prevention Program at LACHP, the needle exchange where I first met everyone back in August. He’s thrilled when I tell him about my encounter with his product on the street. “Good, that’s how it should be,” he says. “Drug users are continuing to lead the way with Narcan. They’re the ones witnessing overdoses, so they’re the ones saving each other’s lives.

The biggest update since the summer, he explains, is a California statewide standing order that allows individuals and community organizations like the LACHP to more easily distribute naloxone to people at risk of opioid overdoses. Since the standing order went into effect at the end of the summer, a representative from the California Department of Public Health tells me that more than 70,000 doses of Narcan nasal spray have been distributed.

Much of it is done via people like Megan Nicolaides, LACHP’s program coordinator, who is also witnessing firsthand the effects of fentanyl. Practically speaking, it’s led her and LACHP to include a third dose of Narcan in their kits, since two may not always bring someone back.

That’s because fentanyl is “60 times more powerful than black-tar heroin,” explains Travis, an addict I met in August who, at the time, had personally saved 17 lives with naloxone. (The number is now 18.) When I catch up with him near MacArthur Park around Downtown L.A., he’s just shoplifted $200 worth of Olay moisturizing cream at Walgreens to buy a bag of fentanyl, which he calls China. “The Narcan party began a year ago when China first arrived in Hollywood,” he explains. “One hundred percent of it comes through a guy called Buddha, who imports directly from a factory near Beijing. People will sell their grandmother’s soul for another hit. It was never like that with black-tar heroin.”

Amy Zuniga, who works alongside Nicolaides as LACHP’s outreach navigator, distributing Narcan to the most vulnerable population on the streets and riverbeds of South L.A., tells me she recently gave out 50 doses in one day — a grim record — and says even more distribution is necessary. “There are so many overdoses happening because of the fentanyl,” she says, shaking her head. “And so, I don’t expect there to be any decrease in the need for Narcan in 2019. It’s just going to keep going up and up and up.”