How BOFA Became the Most Delightful Political Protest of Our Times

Have you not heard of the file on BOFA?

On a June evening in 2018, journalist Harry Shukman found himself in a windowless room at JFK International Airport, surrounded by federal agents. Matt, one of two “enormous stone-faced blokes in suits,” sat in front of him while Vito, his colleague, sat off to the side taking notes. Next to them was a two-inch thick folder displaying the young reporter’s full name and date of birth.

To understand how Shukman found himself in this position, it’s important to understand how BOFA DEEZ NUTS came to define an era of online political pranking. By and large, most agree the term “BOFA,” or “bofa,” originated as one of many setups to the “deez nuts” punchline — sitting among other gems like “sugondese,” “Wendy’s” and “CD’s.” That other half of the joke dates back to 1992, when Dr. Dre’s debut album The Chronic featured a skit track titled “Deeez Nuuuts.”

One of the most influential moments in BOFA history occurred in 2016, when a teenager named Brady Olsen entered into the Republican presidential primaries under the pseudonym “Deez Nuts.” By that point, BOFA had firmly entered the zeitgeist; in an interview with Olsen from that year with Rolling Stone, “Deez Nuts” is referred to as “the bofa meme.” From then on, BOFA was synonymous with anything related to deez nuts. For example, when a bunch of local newscasters said “deez nuts” in 2015, it was declared that they’d been “BOFA’d.”

Perhaps in part because its full power was forged during the chaos of the 2016 presidential campaign, BOFA has also risen to become a go-to political prank wielded by the chronically online. “I don’t know its true origins,” says Jordan Uhl, BOFA aficionado and host of Deep Dive on The Young Turks network. “I just think it’s important, as assholes, that we honor the assholes who came before us and their tireless advocacy and work to develop this into what it is today.”

More often than not, the mark for BOFA-hopefuls are those who project a sense of smug confidence despite, in reality, being big idiots. 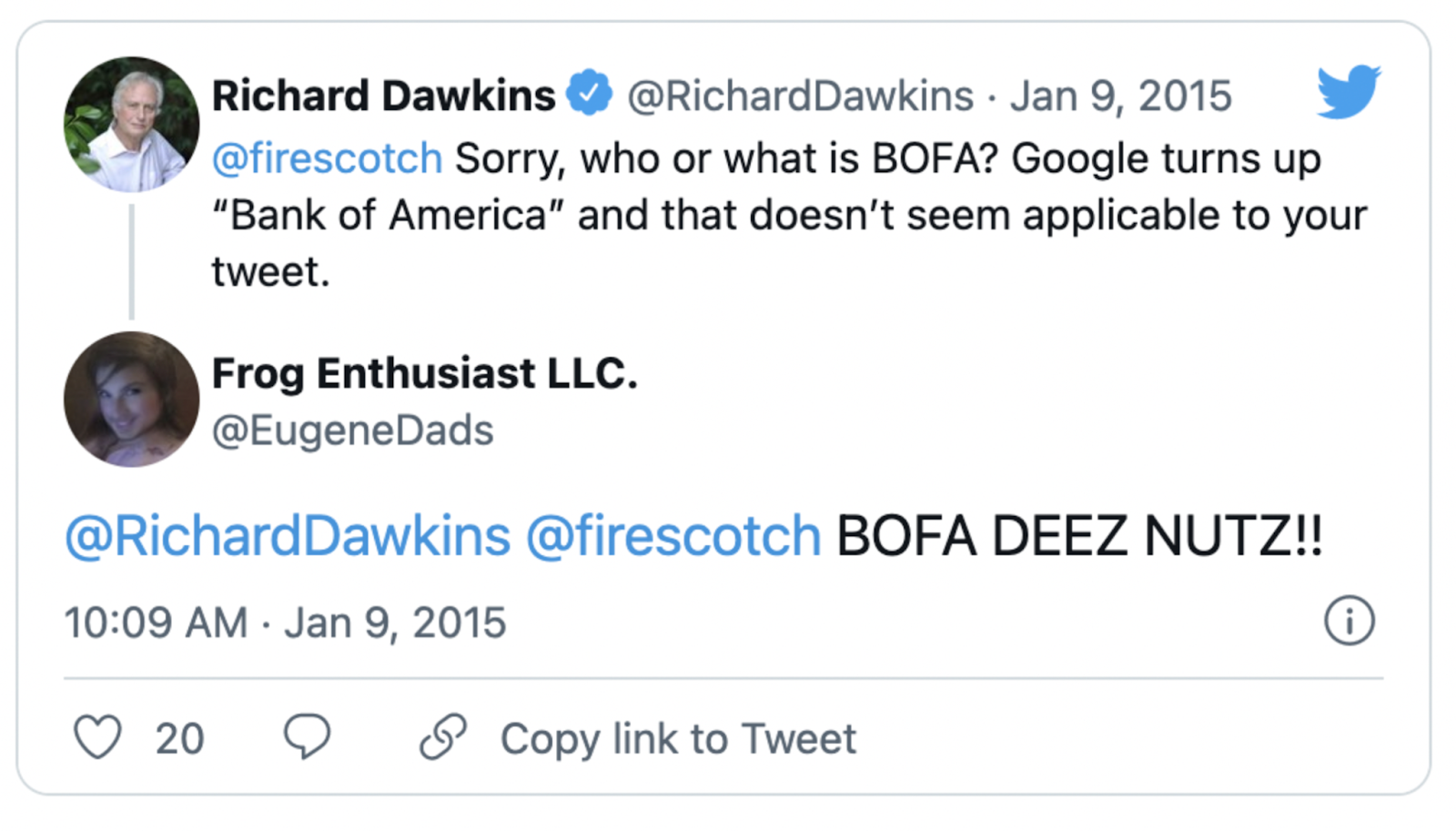 “The idea is just to take these people down a peg,” Twitter user and frequent BOFA specialist @Fuzzy_DunIop tells me. “We can’t really make real change on Twitter (just my opinion), but sometimes we can make powerful or influential people that we don’t like look silly.”

When Dunlop BOFA’d writer and anti-vaxxer Alex Berenson earlier this year, that was certainly the case. After tweeting at Berenson that his “father died while participating in a clinical trial for the BOFA vaccine,” Berenson told Dunlop to email him and asked, “Which is the BOFA vaccine?” Dunlop responded, as one does, with, “BOFA DEEZ NUTS.”

The simplicity of BOFA allows for a rare peek behind the veneer of intellectual superiority contemporary grifters work so hard to create, which is also why the prank has become such a beloved political weapon.

To that end, when writer Jonathan Chait took to Twitter to ask “medical types” whether the small cut on his eye was worth going to the ER over, he got BOFA’d:

When British sports writer Steven Turdson complained that if he were Muslim, making fun of his last name would be a “hate crime,” he got BOFA’d:

When conspiracy-peddling political candidates or everyday right-wing influencers have defended landlords or boldly declared themselves pro-segregation on Twitter, they got BOFA’d:

“It just feels really good to pull off — seeing the opportunity, taking your shot, watching it land and then going in for the kill,” Dunlop says. “There’s nothing the victim can do, they got got and they know that everyone knows it.”

Disguised as a seemingly innocuous acronym, BOFA can also sneakily appear as part of a top-secret file name or government initials — making it the perfect bait for luring conspiracy-hungry political players into publicly shitting the bed. Which is how, in 2017, Shukman found himself blissfully texting back-and-forth with Donald Trump Jr., the son of the newly elected President of the United States. “On my deathbed, I’ll remember this day with the clarity of an epiphany,” Shukman recalls. “It was a slow news day at Babe.net four years ago. I was reading an article on Deadspin about Donald J. Trump Jr.’s profile on a hunting forum. In one of his comments, he mentioned his private email address — which included the letters DJTJR.”

Shukman googled the email address, which led him to an “old PDF that the Trump Organization had uploaded that included a cell phone number.” After determining the number to be genuine, Shukman prepared his BOFA game plan for Don Jr. by recalling the “practice BOFA” he’d run earlier that year on “hapless right-wing activist Jacob Wohl.”

“My American colleagues had instructed me in the ways of the art — how to weave BOFA into a sentence that would be familiar to the target, how to get them to ask what BOFA means and how to strike like some kind of hideous cobra,” Shukman explains. After taking it all in, Shukman prepared his text to Don Jr. “I texted him pretending to be Hope Hicks, who was on Trump’s communication team, on her private cell phone, ready to share a copy of the new ‘BoPher report,’” he recalls. “Don Jr.’s response hit me like lightning: ‘BoPher?’ I nailed him.”

Had Shukman known his BOFA masterpiece would lead to him getting detained by the Secret Service, he says he “would have questioned the wisdom of my decision.” Unbeknownst to him, Don Jr. had reported Shukman’s texts four days after the exchange, alleging they were “aggravating and troublesome to him.” Which is how, six months later, he found himself sitting in a tiny interrogation room with Matt and Vito. “I was asked if I was impulsive, trained in martial arts and knew my way around explosives,” he tells me. “I was, to use an English expression, bricking it.”

Eventually, Shukman was asked how he acquired the President’s son’s phone number, and if he could please explain what he meant by “BOFA.” “I explained how I got the number and that I did it all for a stupid blog post,” Shukman says. “As for ‘BOFA,’ I explained that it was a puerile playground prank that I now regretted sending and wouldn’t do it again.”

Confused, Matt asked him to explain it again. Shukman laughed and stumbled over his attempt at defining the joke, to which Matt responded, “Make me laugh.” So Shukman tried once more. “I say, ‘BOFA’ to you. You say, ‘What’s BOFA?’ And then I say, ‘BOFA deez nuuutz.’”

After another few hours of interrogation, followed by interviews with Shukman’s girlfriend and editor, the agents cut him loose. “Matt and Vito determined I wasn’t a threat to the President’s family,” Shukman says. “They let me go on the condition that I never do it again — which I haven’t.”

Though Shukman has sworn off future BOFAs, he cherishes that others still have that sweet joy at their fingertips. To capture its essence, he borrows a quote from British author George MacDonald Fraser: “In all the world there is no sight so poignant as that of the confident mug when he feels the first sharp bite of the hook and realizes it is going to sink inexorably home.”

Or as Uhl puts it much more bluntly, “Wages suck, benefits suck, health care in this country is a fucking joke, warmongers run the government in both parties, the environment is being destroyed and we can’t fucking do anything about it. So for the people feeling powerless to all of that — for the people who want to tell those in power to fuck off — BOFA has become a funny and cathartic outlet.”