Scarface playing poker with the Joker and Darth Vader? Just guys being dudes. Time to break down the macho appeal of this odd new art genre

Remember the first week of fall semester in college, when vendors would set up on campus, selling stuff you needed to fill out your dorm room? The decor, naturally, was cheap — and pop-culture posters the only kind of art to be found. Everyone went home with Bob Marley, or John Belushi in Animal House, or some psychedelic Grateful Dead shit to stare at after you took bong rips. I fancied myself a man of culture because I had a still from A Clockwork Orange.

Anyway, most people leave that aesthetic behind in the realm of frat parties, midterms and being 19 years old. This junk belongs to young adults who can’t afford frames and aren’t allowed to put nails in the wall (and have yet to discover cinema beyond Quentin Tarantino). But the internet gives it another place to thrive, and there’s a curious subgenre that crops up again and again, demanding closer analysis.

I’m talking about those ensemble portraits where a bunch of TV and movie villains, antiheroes and rogues hang out together in a casual setting. You know, just bad guys being bad dudes. Godfathers, cutthroats and kingpins. It’s like the dark-side version of those cartoons where recently deceased celebrities meet up in heaven. Very chill. 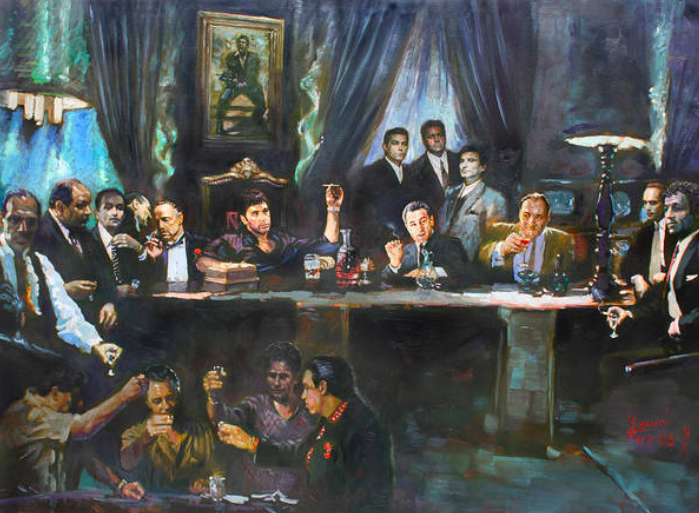 I don’t want to dwell too much on the artistic quality of these works. For me, though, the overt crappiness is essential to the form. The perspective here is an absolute mess, figures are jammed into spots where a body wouldn’t fit, and every face is illuminated as if by a separate light. The artist is perfectly capable of better paintings, but the “fictional crime lords get together at their gentlemen’s club” concept demands an immature, unappealing style.

And that’s before you even start to wonder at the conditions of the reality depicted. These sociopaths are friends? Not trying to con, rob or kill each other? And don’t they live in various historical eras? Does every gangster movie intersect in a Marvel-type extended universe? Does Al Pacino’s presence as Tony Montana mean there’s no Michael Corleone? Where is this meant to be happening? 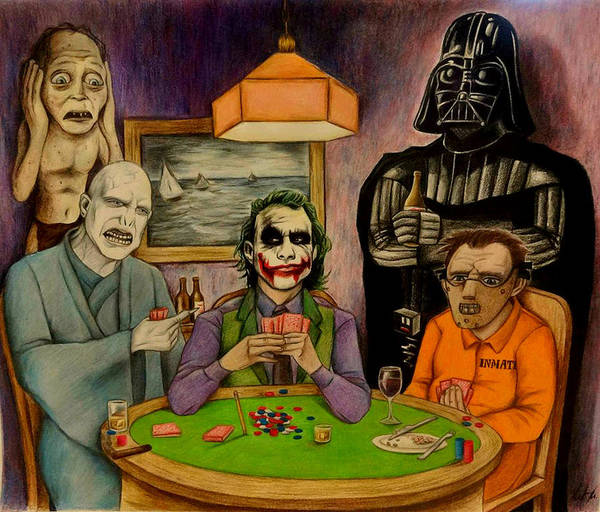 These images are haunted by two masculine fetishes: first, for the badass cool of the iconic malefactors (the art removes every signal from the source material that the antagonists are, you know, evil), and second, for the recreation of a “boys’ night.” A poker table is far and away the most common piece of furniture for such a scene. The deceit of a card game and the riskiness of gambling offer a gentle edge to the proceedings, hinting at the underworld without addressing its violence or moral depravity. It’s monsters and mobsters with some free time between their nefarious schemes; the Joker when he’s not holding Gotham City hostage; Darth Vader after a long day of force-choking the imperial officers who have failed him.

The fantasy is not simply that these villains have a shared social life not depicted on screen. It’s that maybe you, an ordinary bro who watches these films religiously, could socialize with them, without getting shot or sliced in half or beaten to death. Maybe they’d actually enjoy your company. You’d fit right in!

The little flashes of “humor” in the pieces (Breaking Bad’s Walter White, a meth cook, is in the kitchen — get it?) are no match for the overwhelming levels of cringe. The top above image, which brings together the Narcos version of Pablo Escobar, Peaky Blinders’ Tommy Shelby and a Tony Soprano who more than resembles George Costanza, among others, goes so far as to riff on an Avengers post-credits sequence where the superheroes eat shawarma after a climactic battle, implying something like the chummy, quip-laden friendship of that team.

Another favorite motif is “The Last Supper,” perhaps the most efficient format for a two-dimensional lineup of characters, and for a half-hearted subversion of holiness: instead of Jesus Christ and his disciples, it’s a murderers’ row. Oh, madonn’! Is that the freakin’ Wolf of Wall Street? The whole gang’s here!

Yet there’s a deeper, surely unintentional poetry to these low-quality Photoshops, one that particularly shines through in the Da Vinci-inspired examples. Call it the purgatorial aspect — the notion that when Frank Underwood, Patrick Bateman, et al. throw a party, it’s going to be in a decrepit warehouse, over a dinner of, uh, guns and bones. Okay. It’s like these men, many of whom die in their respective stories, are thereafter banished to this shadow realm, where they may commit no further misdeeds and have only each other for amusement. This could be the price they pay for what they’ve done, and trapped there with them are media consumers enamored of nothing but testosterone-driven plots, bloody action and ruthless bosses. The posters have the curious effect of flattening good films and TV series into a single schlocky vibe. 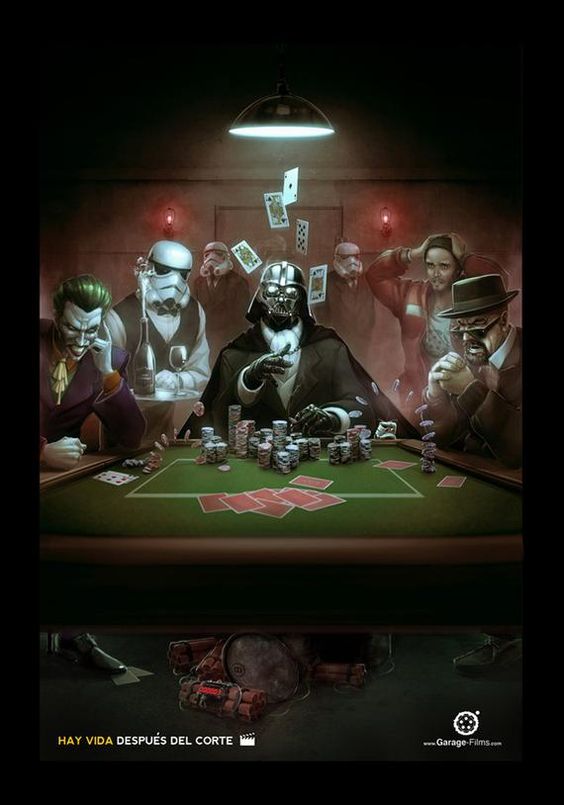 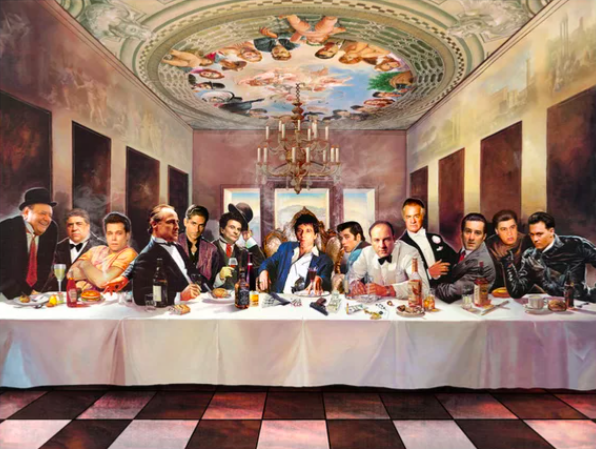 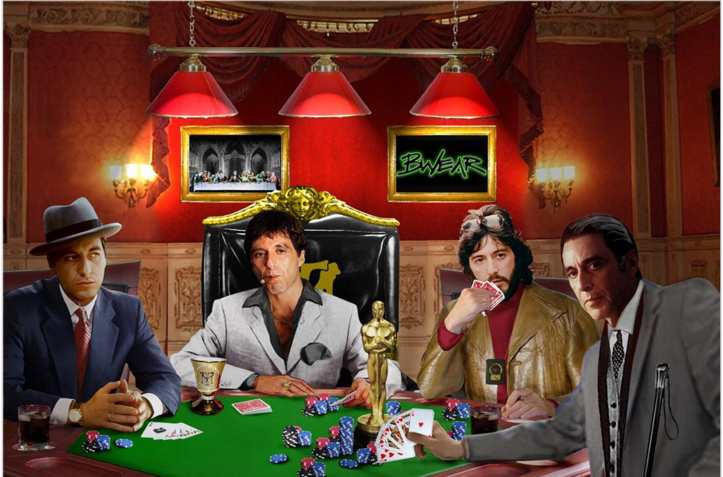 Horrible to behold, and none of it makes a lick of sense. But the progression of art through the centuries is never a straight line, and every period has its weird cul-de-sacs. I hope our foremost academics in the field take the time to study this one, its themes and its masters, and figure out what the fuck it’s supposed to mean.

Because I tried, and all I got was a lousy headache.