Whenever the abortion discourse intensifies, as it has with the news that the Supreme Court will likely overturn Roe v. Wade, there is a corresponding rise in counterfactual rhetoric. What if Albert Einstein’s mother had aborted him? What if a woman terminating her pregnancy today might have given birth to someone who grew up to cure cancer? And what if your parents decided not to have you?

These questions are about as sophisticated and morally pertinent as asking, “What if the sky was green and we walked on our hands?” It’s not, and we don’t. Also, plenty of people are just fine with the idea of having never existed. Sounds kind of chill.

The mainstream political right likes to ground their opposition to bodily autonomy in arguments that are, if not overtly religious, at least coded that way. The condescending thought experiments therefore have the flavor of Sunday school indoctrination. But on anarchic forums like 4chan, where whitebread Christianity is far from the norm, young shitposters and extremists have turned these hypotheticals into memes that express their loneliness and lack of fulfillment.

The earliest of these was “aborted gf,” one among many girlfriend types described in a series of image macros, and it clearly derives from incel ideology. In this scenario, the tragedy isn’t that a great genius wasn’t born, it’s that the fantasy of a submissive female partner was denied.

This self-pitying nonsense is replicated in a sibling template: Apparently, we all could have had an idealized sister or brother if our mothers hadn’t selfishly aborted them. Devastating to learn.

There’s even an “aborted daughter,” by far the most ham-fisted attempt to guilt-trip someone for ending a pregnancy. She doesn’t even have a face. Could this be any sadder? I doubt it!

While the young men of 4chan may sneer at anti-choice appeals to god and the Bible, there’s plenty for them to like here. They can simmer in the rotten feeling of deprivation: no girlfriend, no close family their own age, no prospect of having a family themselves. Meanwhile, they get to revel in the misogyny of always pointing the finger at the nameless woman who could have been “mommy,” an archetypal slut who got knocked up but would rather keep partying or thrive in her career than raise a child. In this way, the memes translate the treacly scenarios offered in the context of faith or ambiguous virtue into a format for angry and disaffected red-pill guys.

Thankfully, however, the fundamental antagonism of 4chan dictates that any and all content must be met with scorn and mockery. Hence the rise of characters like the “aborted girl who’s not interested,” the “aborted mega-abortion inventor” and, most bizarrely, the “aborted horse.” 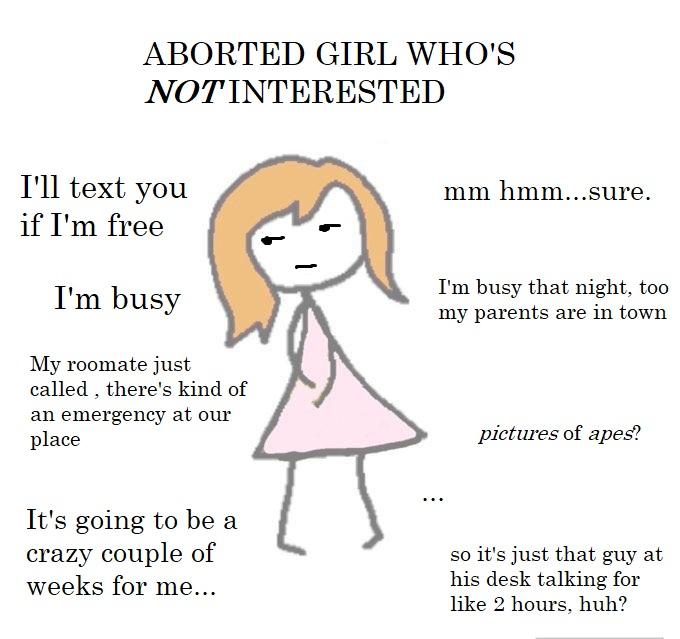 Could these posts prevent an edgelord from going fully anti-abortion by convincing him that it’s a “cringe” opinion? Anything’s possible on a lawless message board. But either way, we ought to avail ourselves of this genre when responding to inane “what ifs” from disingenuous conservatives. Next time you get one of those, ask if they wouldn’t prefer that Karl Marx had been aborted.

See? They’re not the only ones who can derail a debate with stupid questions.