QAnon has entered the ring. A sizable crew of WWE and MMA pros are suddenly dabbling in antisemitic, fringe-right narratives

You can be forgiven for having forgotten about the WWF “Attitude Era” superstar Val Venis. But to quickly catch you up, the “Big Valbowski,” whose real name is Sean Morley, has come a long way from gyrating in a towel and trying to prevent the Japanese Kaientai stable from castrating him. Retired from the ring, he now spends his days on social media tweeting about how former colleague Dwayne “The Rock” Johnson sold his immortal soul to “club pedo” and about how Pope Francis and his “pedo friends” were arrested for child sex trafficking.

Morley isn’t an outlier either, even if he’s among the most prolific producers of such bogus content. Modern-day conspiracy theories regarding COVID, QAnon and 2020 presidential election fraud, almost always posited in their crudest, most absurd iterations, have gained a significant foothold with pro wrestlers and mixed martial artists.

In the course of a brief chat, pro wrestling trainer and Monster Factory owner Danny Cage provided several examples to supplement the ones about which I was already aware. Most notable in terms of his sheer activity level was Drake Wuertz, who now works in the WWE as a referee but wrestled under the name Drake Younger for a variety of independent promotions. Wuertz was actually using his corporate WWE email to collaborate on fundraising projects for a QAnon-adjacent “anti-child trafficking charity” with Matt Morgan, a towering seven-foot retired wrestler who headlined TNA shows in the late 2000s and now serves as mayor of Longwood, Florida. To that end, Wuertz’s social media feeds are full of memes about child trafficking and related matters, and investigations of his “likes” on the now-defunct social media service Parler revealed a similar appreciation for the conspiracy-and-extremism genre.

In terms of big names, one need look no further than Chris Jericho, the fiftysomething face of All Elite Wrestling. Jericho, a wrestling savant whose career has spanned multiple titles and main event runs in various promotions, has always been something of an iconoclast. In spite of that, many fans were surprised when his popular podcast Talk Is Jericho devoted an entire episode to examining whether COVID was a government conspiracy, and still more were shocked when he performed with his band at last year’s Sturgis Motorcycle Rally and praised his adopted home state of Florida for avoiding lockdowns. (Not surprisingly, he tested positive for the virus in September.)

Other main event stars seem to have dabbled in this sort of anti-establishment thinking, too. Nia Jax, a top women’s performer in the WWE who has acquired an unsavory reputation for hurting opponents in the ring, posted on Instagram that she’d prefer to go with her “immune system, as it’s 99.9 percent effective” and manufactured by God, as opposed to a COVID vaccine that’s merely “90 percent effective after eight months of development.” Jax also posted a photo of herself on Instagram wearing a “Save Our Children” T-shirt representing Wuertz’s anti-child trafficking charity.

Likewise, Brandon “The Truth” Vera, an entertaining UFC fighter who competed in both the light heavyweight and heavyweight ranks and currently holds the ONE heavyweight championship, now uses Instagram to pursue the matters that feel most true to him. His page includes a heavy dose of COVID vaccine skepticism, with a recent post in that vein receiving a supportive reply from Chase “The Vanilla Gorilla” Sherman, another UFC heavyweight contender: “Herding us up like cattle… here, take this concoction that we whipped up in a few months, for a 99 percent non-lethal virus.” (Sherman’s own page offers a fascinating mix of mask and lockdown skepticism and 2020 election fraud posting.)

Along the way, Vera, ever true to his surname-derived nickname, also chases the truth of the alleged global child abuse scandal ostensibly being unveiled through Q posting, sharing numerous reports about pro-pedophile happenings worldwide, such as highlighting a law in the Australian state of Victoria that makes it a crime for anyone to disseminate information that leads to the identification of sexual assault survivors, including the survivors themselves. The law, mentioned in a post by Vera that earned a like from MMA and action-movie legend Cung Le, is indeed real, but despite receiving a good deal of justifiable criticism from victims’ rights activists, it’s unrelated to any satanic, globe-spanning conspiracy. 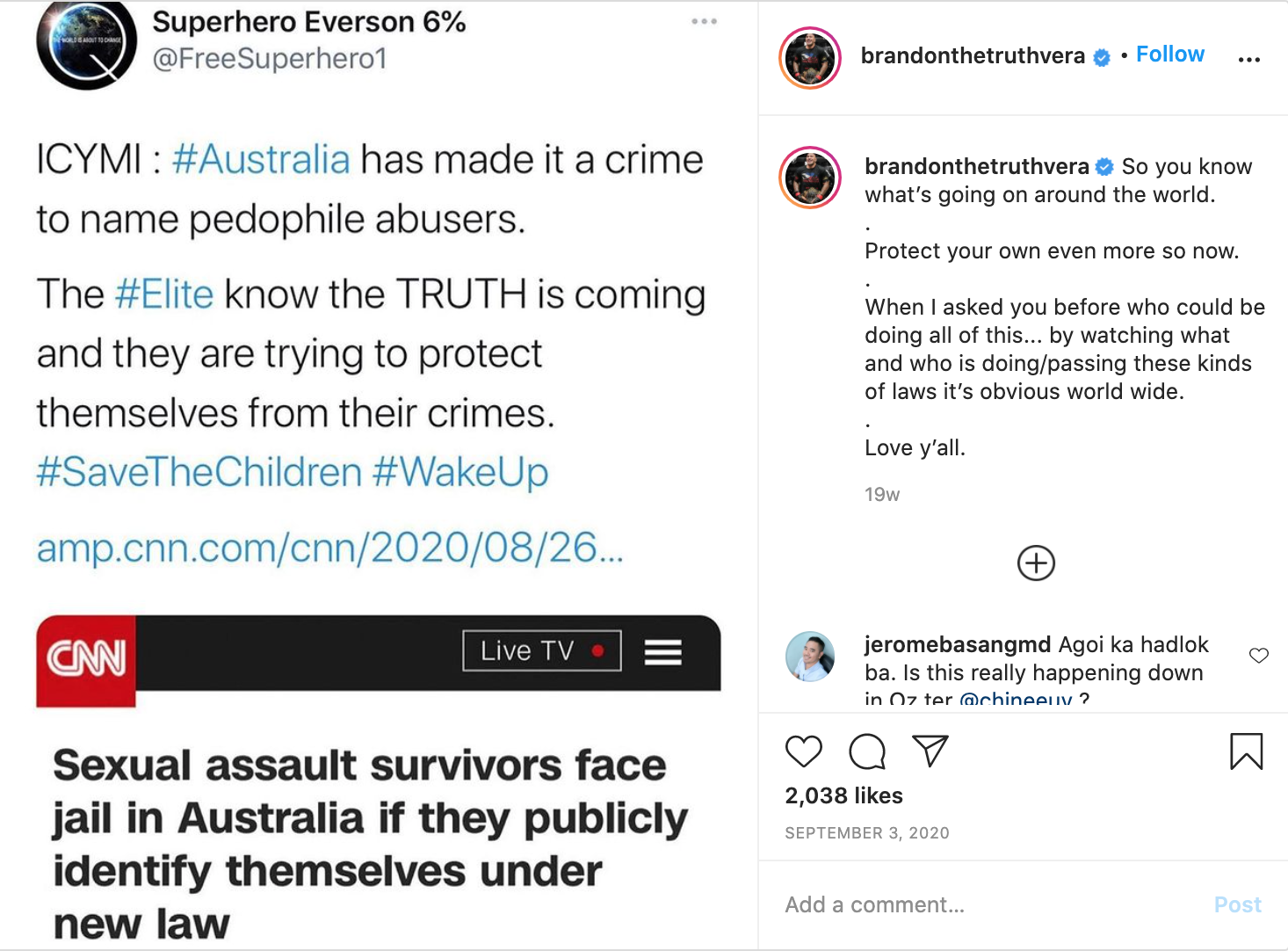 And even here, we’re just beginning to scratch the surface. For every post like the ones made by Vera, there are dozens of likes by even more prominent athletes like Le, individuals who might be sympathetic to these causes but unwilling, perhaps for publicity reasons, to go “all-in” on main. Then again, other big names, such as UFC’s first welterweight champion Pat Miletich — a man whose well-rounded approach to fighting made him the subject of the 2009 book Blood in the Cage by long-time Sports Illustrated writer L. Jon Wertheim — are unafraid to put their reputations and careers on the line. Miletich, who now hosts a podcast called The Conspiracy Farm, attended the recent Capitol riots and lost his commentary job with Legacy Fighting Alliance as a result. The ex-champion stated that he was at the front of the Capitol and witnessed the Proud Boys “absorbing grenades, tear gas and massive amounts of pepper spray” while protesting peacefully. He instead attributed the resulting violence to antifa and federal operatives seeking to foment insurrection, two claims rebutted by the FBI.

One reason for the rampant nature of these beliefs in pro wrestling and MMA, explains Danny Cage, is pretty straightforward. “This stuff is everywhere, but you see it more in wrestling and MMA because we all have big mouths and bigger-than-average platforms to broadcast it,” he tells me.

The other reasons are more intrinsic to the fight business itself. In particular, economics PhD Ben Labe points to the precarious employment status of these workers, independent contractors who more or less lease their services to the promotions that use them. “They’re not classified as employees,” Labe explains, “which means they’re essentially working for themselves. It’s a context that could lend itself to worker solidarity, but past wrestling unionization efforts have been snuffed out by wrestlers snitching on each other or scabbing, and whatever revenue relief UFC fighters may soon win in the courts will come via the use of antitrust law citing the company’s position as a monopsony buyer of their services, not unionization.”

As such, Labe continues, “Many of the people working in these fields operate with the mindset of small businesspeople, so-called ‘rugged individualists’ who think for themselves. They’re cynical, hard-bitten, scrapping for every penny and often ruthless to each other, but also the most easily conned, subject to false beliefs that not only have they figured out all the answers to, they managed to do so through cloak-and-dagger study of messages encoded in goofy internet posts.”

They also live in a very small, very insular world. To that end, the French historian Marc Bloch, who fought in both world wars and wrote about eyewitnesses and evidence in his book The Historian’s Craft, has described the isolated trenches of World War I as areas in which soldiers, faced with the delivery of newspapers and letters they correctly believed to be censored, came to share the “prevailing opinion … that anything might be true, except what was printed.” These soldiers, in turn, sought information through rumor, word of mouth and discussions in field kitchens — a revival of the oral tradition of a bygone age, when people shared their own stories and “truth” was whatever legend around which some hasty consensus formed.

Wrestlers and fighters obviously aren’t soldiers in the theater of war, but they’re nevertheless isolated in their own way from the ranks of the noncombatants. Mat rooms, gyms and wrestling rings are hardly places congenial to mainstream or conformist thought. I’ve spent a lot of time residing in and researching this world, and I’ve come to understand that its appeal arises primarily from the fact that your performance is entirely your own. As an amateur wrestler, submission grappler or mixed martial artist, you win or lose on your own merits; you control your destiny; the buck stops with you. Pro wrestlers engage in athletic exhibitions with predetermined outcomes, meaning their success depends in part on the cooperation of their opponents, but they still rise or fall in the ranks depending on their ability to maneuver dexterously in the ring and talk with gusto on the microphone.

Certainly not, but it may go some distance toward offering an explanation for it. And Labe’s remarks about the precarity and insecurity of independent contractors, even well-off ones, gets us a bit further. Historian Norman Cohn, author of The Pursuit of the Millennium, lets us square the circle (pun unavoidable), speculating at the conclusion of his book that unionized industrial workers could perhaps resist such wild enthusiasms because they were pursuing practical programs of advancement. By contrast, individuals on the outside looking in — Karl Marx provides a partial list of such people in The Eighteenth Brumaire of Louis Napoleon, including “ruined roués with questionable means of support and of dubious origin, degenerate and adventurous scions of the bourgeoisie, vagabonds, discharged soldiers, discharged convicts, runaway galley slaves, swindlers, charlatans, pickpockets, tricksters, gamblers, procurers, brothel keepers, porters, literati, organ grinders, rag-pickers, knife-grinders, tinkers and beggars” — lack genuine pathways for advancement and instead turn toward “emotionally charged phantasies of a final, apocalyptic struggle or an egalitarian Millennium.”

Today, alongside those disreputable types of yore, one might classify pro wrestlers and fighters, itinerant performers left to their own devices within tight-knit, intensely private communities, far away from the normies even when they happen to be watched by millions of them. And so, it’s a smaller step from in-ring fighter and performer to fire-breathing mad prophet than most people think. One day you’re Justin “Big Pretty” Willis, a heavyset former college football player now capable of decisioning a top UFC fighter like Mark Hunt, and the next you’re hosting your Pretty News podcast, talking about adrenochrome and the “AshkeNAZI jews.”

Don’t believe me? Look it up. This truth is definitely out there.