The 1997 classic ‘Air Bud’ would like us to believe that Buddy is a great shooter, a great passer and a great all-around player. This is wrong, and we finally have the metrics to prove it

Josh Framm gets the ball in transition and pushes it down the floor while a defender guards him tightly. He makes it past half court and heaves it ahead to his teammate, the squad’s breakout star. The ball hits him square on the nose.

Miraculously, though, 12-year-old Josh is able to catch the errant basketball. He drives toward the hoop and finishes the play with a silky-smooth finger roll. This is classic Timberwolves middle-school basketball: a give-and-go play very nearly ruined by one popular player’s limitations.

Buddy, the star of the 1997 hit movie Air Bud, spends most games mindlessly running around the court with his drool-soaked tongue dangling outside his mouth. The movie would like us to believe that Buddy is a great shooter, a great passer and a great all-around player, but this is wrong. Air Bud’s jump shot and ability to move the ball around the court are ultimately marred by the fact that he is a dog, and therefore simply can’t hang with the other middle schoolers. Finally, we have the metrics to prove it.

Buddy’s legacy is cemented in the dog basketball history books thanks to Josh, whose strategy consists of pelting the ball right at the dog’s head, either to distract the defense or, in this case, to angle the ball into the basket.

What is Air Bud doing? He’s jumping up and getting his face smashed into a basketball. In this dog’s mind, he might as well be ramming his head into the underside of a coffee table. It’s clearly the kid doing all the work here.

Also, on this play, Josh gets two people up in the air with a pump fake. He could easily (and wisely) take the shot himself, but he decides to make the unselfish (and foolhardy) play and assist Buddy, who had zero points up until that moment. To put it another way, Josh has a wide-open shot mere feet from the hoop. Instead of taking it, he throws the ball at a dog.

That isn’t to say Josh is untalented. Through the excitement of watching a dog playing basketball in Air Bud, we forgot how good of a middle-school player Josh is. This kid is so dedicated, he uses the entirety of his backpack to carry around a basketball all day. When his teachers at school start class, all of his classmates pull out textbooks, but our guy Josh pulls out a basketball. The kid can flat-out ball.

Getting past this fact, I will hand it to Buddy. The box scores and standard basketball metrics actually support an argument for Air Bud’s basketball prowess, which is exactly why we have to look at more advanced metrics. These stats we’ll be looking at today are new; I created them. One is called FGWKTBAH (Field Goal % With Kid Throwing Ball at Head); the other is FGWOKTBAH (Field Goal % Without Kid Throwing Ball at Head). Let’s check out Air Bud’s:

Now, let’s compare this to other basketball players. Here’s Josh, the kid from Air Bud:

And even Kwame Brown, a washed-up first overall pick, survives this test:

No two ways about it: This is absolutely damning for Air Bud.

On top of this, Buddy can’t dribble, so he’s limited to either passing or shooting immediately upon receiving the basketball. This predictable offensive style simply won’t cut it in the modern pace-and-space, switch-on-everything middle-school basketball league in which the Timberwolves are so dominant.

Could Air Bud have been an extraordinary player? Absolutely. We can’t forget that before he was abandoned by an evil clown and tamed by Josh, Air Bud lived as a beast, hunting birds and other small animals for sustenance. 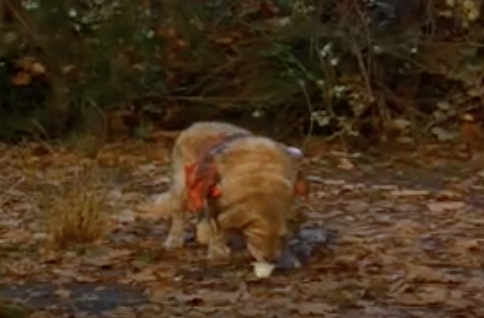 However, Buddy never harnesses this quality in a productive way. He sticks to his safe play, either passing or shooting every time. So, the question remains, on the biggest stage in middle-school basketball, how was Air Bud able to propel the Timberwolves past the No. 1–seeded Warriors, an absolutely stacked team with the ability to shoot mid-range jumpers and penetrate the lane with gritty isolation ball?

Credit to the Coach

When former NBA player Arthur Chaney takes over as head coach, and the team’s leading scorer, Larry Willingham, switches schools, the Timberwolves face an uphill battle. But Coach Chaney’s strategy of prioritizing ball movement gives Buddy room to blossom as a player and dog. In this system, Air Bud’s pass-or-shoot-on-sight style of play can thrive. In the box score, Air Bud’s plus/minus is off the charts; he has a noticeable impact on the team as soon as he steps out onto the floor. But without Chaney’s system, Buddy would just be smacking his head into the ball randomly, to no avail.

Here’s an offensive setup from the Timberwolves before Air Bud gets put in the game.

While this play does result in a steal, it demonstrates the Timberwolves’ ability to space the floor and keep options open for cuts using a solid box formation. Here, James can make a backdoor cut to the rim; Chris can set an off-ball screen, freeing up Stuart for a wide-open jumper; or Josh can take the ball to the rack himself. When you put a dog in this situation, the options become:

Now, check out the first play Buddy makes when he gets on the floor:

Yes, it’s one of the many steals Air Bud notches in the game, but is it really Buddy’s talent that wins the steal… or a bad play by the Warriors inbounder? Air Bud has to move a total of one step to get the ball. Why does the Warriors player pass it that way? All this play suggests is that the inbounder is going to get reamed by his coach once the Warriors go back to the film room.

There are countless other steals that look way more like the opposing player’s mistake than Air Bud’s talent. After that, the only other notable defensive play Air Bud makes in his 1997 movie is this:

There’s no rule saying a dog can’t play basketball, but there is a rule saying you can’t head-butt an opposing player’s crotch — it’s a flagrant-2 foul. The vast majority of Americans think of Air Bud as an all-time middle-school defender. But based off these plays? I don’t think so.

Finally, we have to mention the fact that Air Bud is a dog, and so he needs to be cared for differently from other basketball players. To clear this up, similar to a Kirk Goldbury’s shot charts, I’ve created a new data visualization tool called the “Piss Chart” to see where, and with what frequency, players tend to empty their bladders on the court. 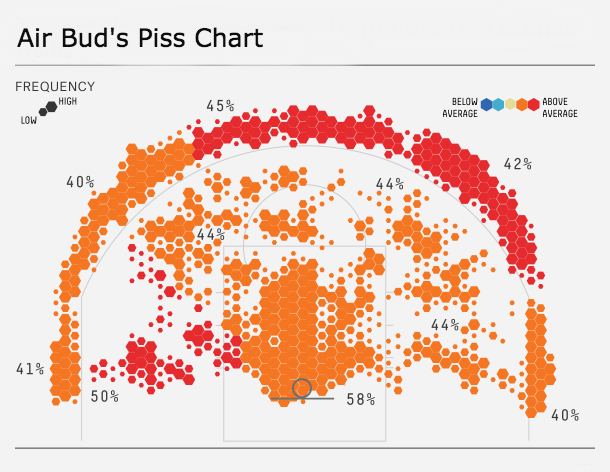 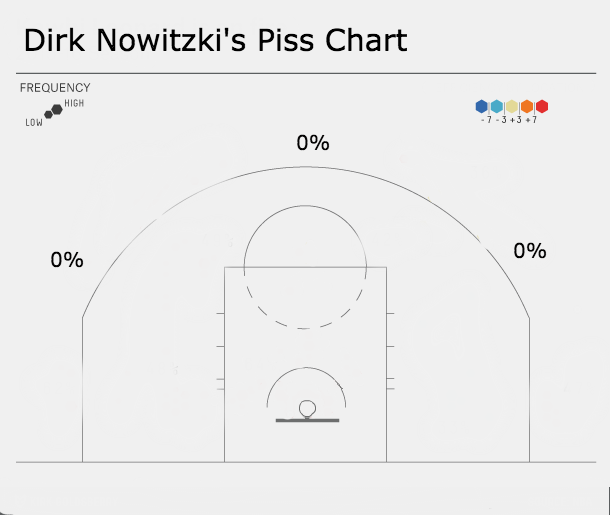 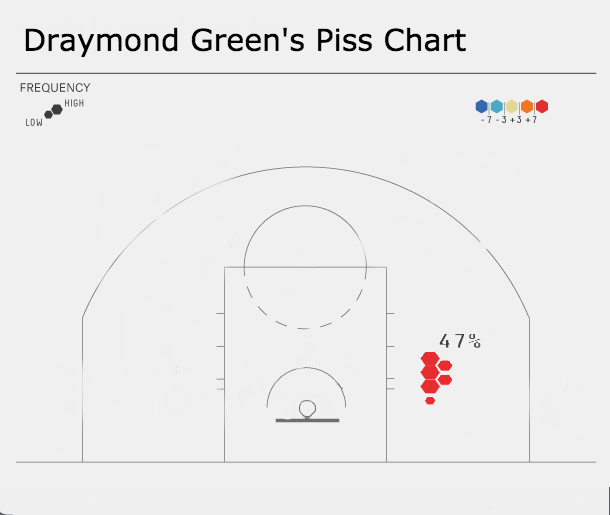 So there you have it, folks. Air Bud’s flashy style clearly masks his subpar basketball playing, which is how he was able to make us all believe a dog could not only handle himself on the court but exceed expectations in a middle-school league. Buddy is clearly not as solid as a basketball player as we all think. And without basketball, Air Bud is simply a very adorable dog.

Sorry, Bud. There are lots of sports out there — and signs suggest you might actually be a decent football player. 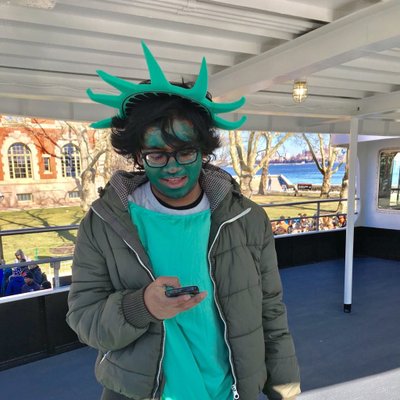 Rajat Suresh is currently a Senior Contributing Writer at ClickHole and a Contributor at The Onion. After graduating college, he received a Writing Fellowship from ClickHole and moved to Chicago for six months, where he performed at several ClickHole live shows. Rajat lives in New York and performs live comedy alongside making short internet videos. He would love it if you followed him on Twitter: https://twitter.com/rajat_suresh