Bite Into the Ultimate History of Party Mix

The origin of Party Mix is exactly what you want it to be: a bunch of drunk, hungry guys in a bar

“Party Mix! Do I know it?” says Brian Ream from Keystone Food Products of Easton, Pennsylvania, with a chuckle. “Sure I do. We invented it!”

I’ve lived in the same New York City apartment for over 15 years, which means I have made [consults abacus] somewhere in the neighborhood of 400 billion trips to my corner bodega. Jorge’s Deli (the one with the red awning with the words “Cold Beer,” “Sandwiches,” “Lotto” and “Snacks” in bold print) is practically an extension of my home. Everyone there calls me “boss,” except the one dude who calls me “big guy.” I call everyone “my friend.” They know they’ll keep the change, but they still offer it anyway.

When you first enter Jorge’s, you’re hit with the premium chip rack. That’s where the Frito-Lay stuff goes. Cool Ranch and Nacho Cheese Doritos at eye level. Then the Lay’s (all varieties, from Wavy to Limón), then Cheetos of the crunchy, puffed and Flamin’ Hot varieties. Off to the side, though, there’s something more curious: In a slightly smaller bag (but at a similar price point) are the Frito-Lay Munchies Cheese Fix Snack Mix. 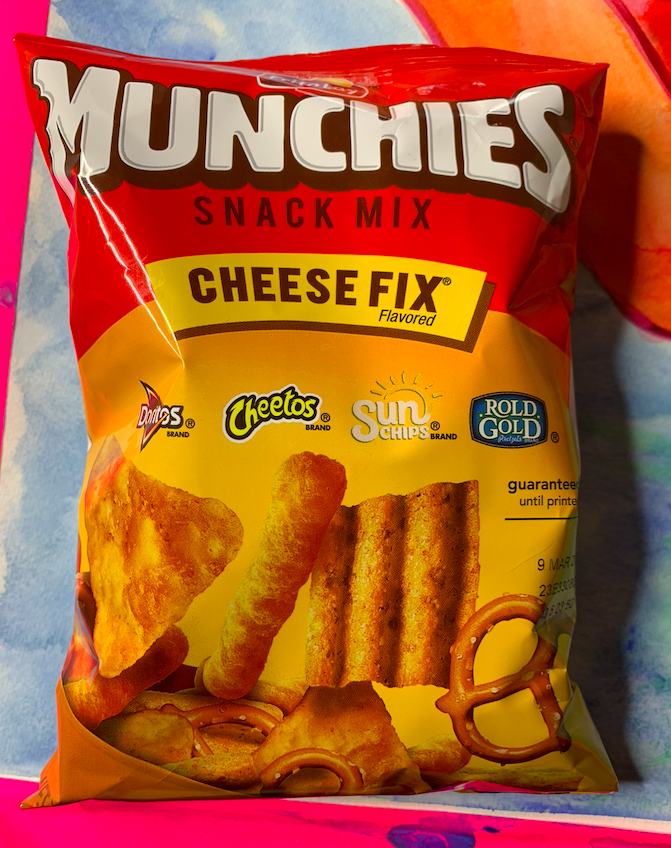 This is a hybrid product, a greatest hits of Frito-Lay snacks. It is made of four parts: the almighty Doritos Nacho Cheese Flavored Tortilla Chip, the fingertip-staining Cheetos Crunchy Cheese Flavored Snack, the Rold Gold Tiny Twist Pretzel and a product that still, for whatever reason, I’ve convinced myself is a “healthy option,” the Sun Chips Harvest Cheddar Flavored Mini Whole Grain Snack. The interior of the bag contains a misting — an aura, a haze — of savory cheese powder that makes Munchies irresistible. (A 3-ounce bag contains 28 percent of your daily allowance of sodium and 25 percent of fat, but let’s not get into all that.)

Snacks dot Fandom dot com tells me this iteration of the “Cheese Fix” sprang up in 2006 — relatively recently for a guy like me, whose favorite flavor of Pringles is “Pringles.” Where, one might wonder, did this idea come from? For that, let’s plunge further into Jorge’s.

The second chip rack is where all the Latin items live. The plantain chips, the chicharrones and the current jefe of the trade, the Takis, in all their variant en fuego forms. But back even further, behind the few sad apples, the Nescafé jars, the Swiffer replacements, Hefty bags, yesterday’s unsold Posts and El Diarios, is where I like to go: the miser’s rack. This is the land where no Frito’s Corn Chips are found, but instead lives its greasier, more heartburn-inducing cousin, the Wise Dipsy Doodle. No one prefers what’s on this rack, until they look at the price tag. What’s $2.49 upfront is a mere 99 cents in this community of the damned. And something you’ll always find is Party Mix. 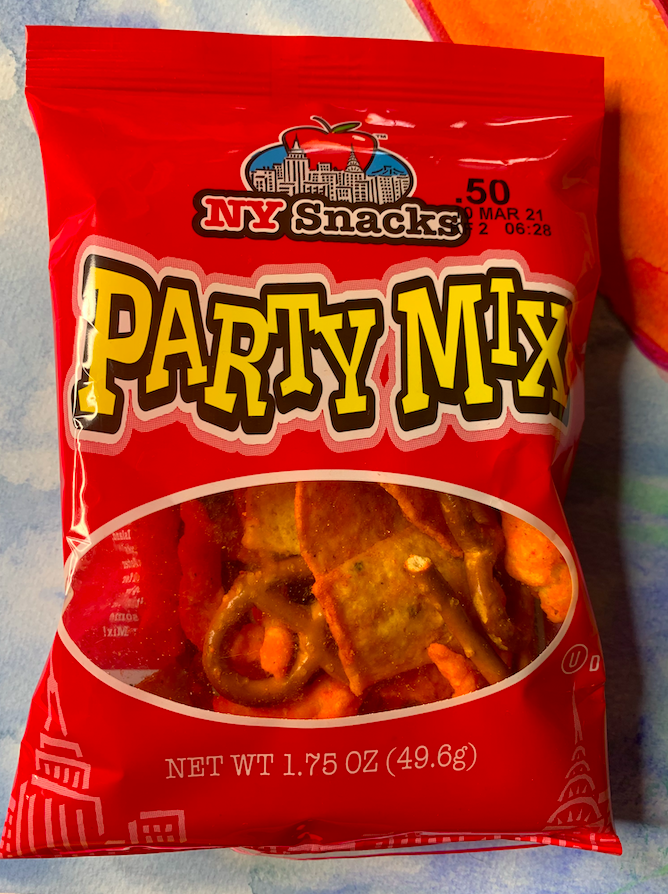 What defines a party can change depending on who you’re talking to, but Party Mix, in the realm of bagged snacks, is a very specific thing. Keystone’s trademark of 1997 lists four components: tortilla chips, corn chips, pretzels and cheese curls. But Brian Ream, VP of Sales & Marketing, tells me that there are actually six components. Nacho cheese tortillas and crunchy cheese curls: check. For the corn chips, there should be regular corn chips and also BBQ flavored corn chips (some knock-offs don’t take this extra step). And for the pretzels, the true Party Mix (e.g., the Keystone Party Mix) has both pretzel sticks and the pretzel “midgee,” which are the small pretzels.

“Midgee is an industry term,” Ream tells me, derived from the Tootsie Roll midgee. He boasts that if you search for it online, you’ll get a return on Urban Dictionary that sources it directly to Keystone’s Party Mix. I ask if calling something diminutive a “midgee” might be interpreted by some as offensive, to which he says, “Well, it’s better than calling them dwarfs!” Fair enough.

The origin of Party Mix is exactly what you want it to be: a bunch of guys hanging out at a bar. It was late into a sales meeting “some time in the 1980s” and Keystone’s founder, the late Bill Corriere, something of a legend in the Pennsylvania food industry, was there. It was getting late and the bags of snacks were dwindling, so someone poured what was left from each of them into one, mixed it up and a legend was born. (It was also in the mid-1980s when Ralston Purina finally started pre-packaging Chex Mix, a long-published recipe of a bunch of crap all thrown into a bag. It’s possible the success of this product helped bring Party Mix to the marketplace.)

Of the larger brands, Utz of Hanover, Pennsylvania, makes a Party Mix, and Bachmann, which is owned by Utz, makes one too. Neither have pretzel midgees or sticks; they have wheels instead. Utz’s has the plain corn chips and BBQ corn chips, while Bachmann’s has only BBQ, but a plain corn tortilla. Herrs of Nottingham, Pennsylvania, has a Party Mix, but Wise of Berwick, Pennsylvania, isn’t in the Party Mix game. My calls asking Wise why they were such chip cucks weren’t returned, nor were my emails to Frito-Lay looking for details about their bald-faced Party Mix ripoff, Munchies. (Frito-Lay is from Texas, and I guess doesn’t believe in the Pennsylvania Chip Purity Law.)

Party Mix is the biggest seller for Keystone (“it’s our Oreo”), but what’s interesting is that what I get at Jorge’s Deli doesn’t have their branding. “We do a lot of co-packing,” explains Ream. “Yours might be us; it might be another brand.”

A lot of the Party Mix bags you come across, in fact, are from companies that, when you stop to think, you may not have heard of, like Martin’s Snacks of Thomasville, Pennsylvania, or Dutch Valley Foods of Myerstown, Pennsylvania. My 50-cent, three-quarter-ounce bag comes from NY Snacks, a company which, as far as internet sleuthing is concerned, seems not to exist. It’s distributed by Yorktown Snacks of New Hyde Park, New York (these salt bombs won the war!), another company with hardly any digital footprint. Google Maps shows that a boring brick building does exist out there, festooned with decades-old images of Peppy, the owl mascot of Wise Snacks. The contents of my bag likely came from the glorious, greasy land of Pennsylvania, where the rivers are made of monosodium glutamate and the meadows are sprinkled in nacho cheese.

“The problem with Party Mix,” says Butch Potter, co-owner of Martin’s Snacks, “is its high density.” While Party Mix is a consistent earner for Martin’s, Potter calls it a niche business. “It looks expensive in the bag,” he explains, because of the aforementioned high density — even though the amount of product by weight is high, when you eyeball the bag next to a typical bag of chips, something just seems off to a consumer. That’s why you don’t usually see Party Mix in a supermarket — you see it in liquor stores, you get it in vending machines or you find it in the weird rack at the back of the bodega.

But about 15 years ago something big happened: The ever-expanding Pennsylvania brand Utz started putting them in clear barrels. “Utz is dominant with barrels,” Potter tells me. You’ll find them in Sam’s Club but also office supplies stores. Office Depot’s Party Mix is supplied by Keystone, Ream is proud to inform me, and for a while they supplied Utz, too. But he thinks the days of the big tubs might soon be over. “They’re tough to recycle and they’re expensive. Tubs were cool for a while, but we think the industry may be heading away from them.” After some prodding to find out what’s next for chip distribution, I’m told to keep an eye open for flat-bottom bags, which, he says, “look great on a shelf.”

While what elements make the party in Party Mix have been established, there is still some room for experimentation. Keystone created a “hot and zesty” variant, which sells at about a one to 12 of the regular Party Mix, “but those who love it really love it.”

Party Mix is a strictly American phenomenon for now, but we are currently living through history. The first ever Keystone delivery just shipped to Australia weeks ago, the first ever samples sent beyond our shores. “Party Mix down under!” Ream jokes.

Lord knows what other food products sit on that back rack of curiosities in the Australian version of a bodega, but it’s good to know something new is being added to the mix.