Ranking Veggie Chips by How Healthy They Are

Potato chips, I hate to say, are atrociously unhealthy. Commonly loaded with calories, salt, gratuitous ingredients and undesirable fats, they also usually endure a frying process that can create a chemical called acrylamide, which is believed to contribute to the development of cancer. Combine all of that with potato chips typically coming up short on the nutritional spectrum, and you end up with a lot of bad and no good.

But hey, they taste great!

Then, there are veggie chips, which often line the shelves at stores where people buy juice shots. They’re virtually the same thing as potato chips, but made with vegetables other than white potatoes. The packaging sells them as a healthier alternative to regular potato chips, but my trust issues prompted me to dig a little deeper. So I asked Dana Hunnes, senior dietitian at the Ronald Reagan UCLA Medical Center, to help me rank an assortment of veggie chips by how healthy they are — from healthy as a vegetable to, well, just about healthier than potato chips, I guess.

Now, as I just hinted, Hunnes says that, in general, veggie chips are “better than your average potato chip made from white potatoes.” This is partly because, as far as vegetables go, potatoes are relatively low in nutrients, and since potato chips already have a reputation for being garbage, the manufacturers often feel comfortable leaning into that and padding their products with even more unhealthy ingredients, whereas veggie chip consumers might be less likely to let that fly.

Hunnes concedes, however, that definitively ranking the veggie chip products I sent her is kind of a hopeless task, partly because many of them are held to the same standard; come in various flavors with contrasting amounts of sodium; and are made from many different vegetables. “All of them need to be looked at with a grain of salt,” she emphasizes, adding that you should always stick to the serving size to avoid going overboard — something that can be tough when some marketing person has expertly led you to believe that their chips are healthy.

Hunnes does have a general note, though. “Of course, the darker-colored items with fewer ingredients will be the best,” she says. This is because dark-colored vegetables are particularly rich in an assortment of plant compounds called phytochemicals, which help ward off diseases and tend to make them healthier than their lighter counterparts.

Bearing all of that in mind, Hunnes was able to provide me with something of a loose ranking. 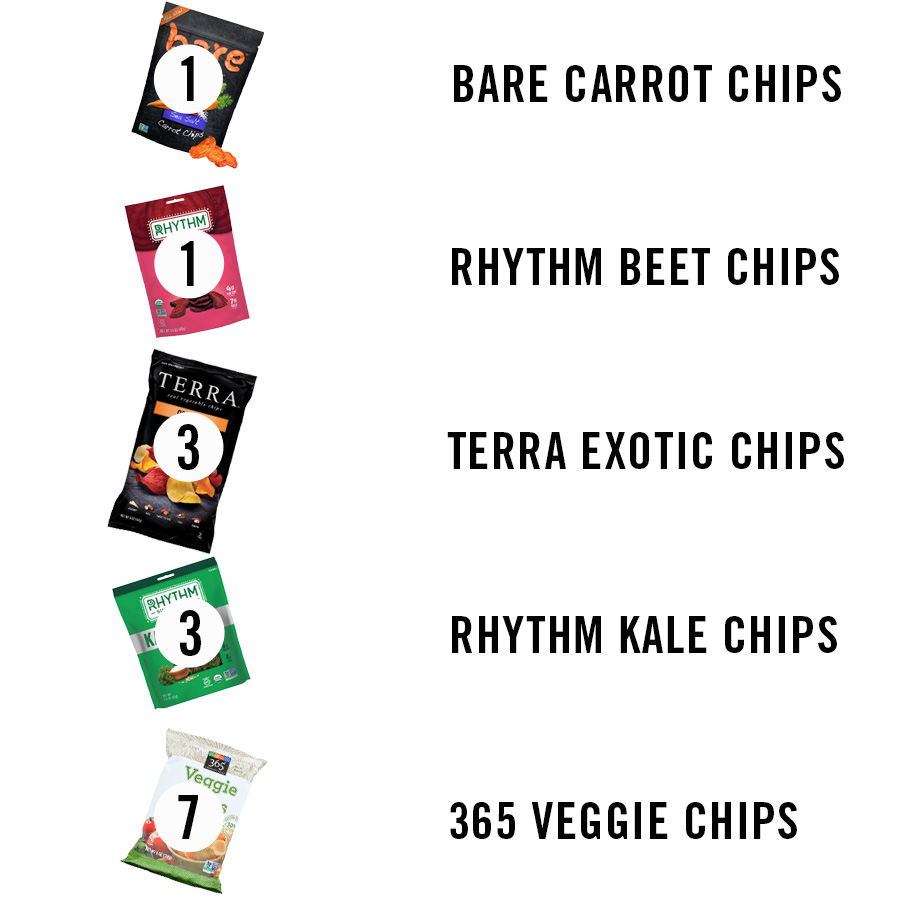 1) Bare Carrot Chips and Rhythm Beet Chips (tied): Hunnes specifically calls these two out as “among the healthiest,” for several reasons: Both of them are baked or roasted, rather than fried in oil, which keeps the calories and unhealthy fats down, and they have no extra ingredients besides the vegetables themselves and a bit of salt. In fact, while the carrot chips have a dash of added salt, the beet ones only contain the salt naturally found in beets. Of course, both carrots and beets come loaded with nutrients, so considering these chips are essentially just roasted versions of them, your body will appreciate you eating them. Your taste buds, on the other hand, maybe not so much?

3) Terra Exotic Vegetable Chips and Rhythm Kale Chips (tied): Both of these, as far as I could tell, are dehydrated without being fried, and while the kale chips have some additional ingredients — sunflower seeds, apple cider vinegar, lemon juice — none of them are nutritionless fillers. Moreover, both kale and the root vegetables used to make the Terra chips, including sweet potatoes, are super nutritious. They do have a bit of salt and even some sugar, but unless you go binging on them, none of that should add up to anything significantly unhealthy.

5) Hippie Snacks Avocado Crisps, Hippie Snacks Cauliflower Crisps and Forager Project Super Greens (tied): While none of these are particularly bad choices, especially compared to your standard potato chips, they contain some of what could be considered filler ingredients, like rice, flour and starch. Again, none of those are downright dangerous per se, but more bulking ingredients means fewer nutrients from the actual vegetables.

7) Sensible Portions Garden Veggie Straws, Harvest Snaps Green Pea Snack Crisps and 365 Everyday Value Veggie Chips (tied): These are all good examples of marketing that attempts to create an image of a healthy product while pushing something that, in reality, is just kind of bleh. Sure, these have fewer calories and less fat than Cheetos, but the small amounts of vegetables in them have been so blended up with rice, starches and oils, that any nutrients they might contain are scarce. Plus, because there are so many airy filler ingredients — and because the packaging promotes a sense of healthiness — it can be really easy to eat more than you should, which can shoot your salt intake through the roof.

Now, all things considered, even the unhealthiest veggie chips are healthier than the cheese dusted crap you buy at the gas station. But the idea that veggie chips are straight up healthy is, for the most part, misleading. Unless they’re literally just baked vegetables in a bag, in which case, can you even really call that a chip?