Ranking Super Bowl Snacks by How (Un)Healthy They Are

Chicken wings? Potato skins? Nachos? Which is most likely to ruin my Super Bowl Sunday evening?

Some people watch football on Super Bowl Sunday, others smoke crazy-potent bowls of Super Blue Dream. I just wanted to let everyone know that I smoke weed during the Super Bowl. Thank you. Goodnight.

But anyway, either way, almost everyone spends Super Bowl Sunday eating super-dank food, which is why I asked Dana Hunnes, senior dietitian at the Ronald Reagan UCLA Medical Center, to help me rank popular Super Bowl snacks — from potentially healthy to the ones that will make your toilet look like they got hit by a… football… tackler guy? I also don’t know anything about football, thank you, goodnight again.

But first, let’s talk about some basic dips, which are the foundation upon which any good Super Bowl spread is piled. “Salsa is probably the healthiest dip — if you can even call it a dip — since it contains the most fiber and potassium [which decreases the risk of stroke and lowers blood pressure] that come from tomatoes,” Hunnes explains. “It’s also low in calories.”

Hummus, meanwhile, is the second-healthiest dip. “It contains some plant-based proteins and fiber,” Hunnes explains, adding that guacamole comes next. “Guacamole is extremely healthy, since it contains monounsaturated fats [which lower cholesterol, and therefore, reduce your risk of heart disease and stroke] and fiber.”

As for the unhealthy dips, “Artichoke dip and onion dip are usually sour cream mixed with artichoke hearts and onions,” Hunnes explains. “They contain a lot of [artery clogging] saturated fat and [tumor promoting] casein, as well as a lot of calories without much benefit.” Lastly, it will probably not surprise you that Hunnes says queso is the least healthy dip. “This is high in saturated fat, casein, calories and salt — it’s not healthy,” she emphasizes.

Unfortunately, the same can be said about the vast majority of popular Super Bowl snacks. “There aren’t many items on this list that could be considered the least bit healthy in their ‘typical’ form,” Hunnes says.

But of course, we all knew that, and we’re going to do it anyway. Why? Because that’s showbiz, baby. Now let’s rank those Super Bowl snacks… 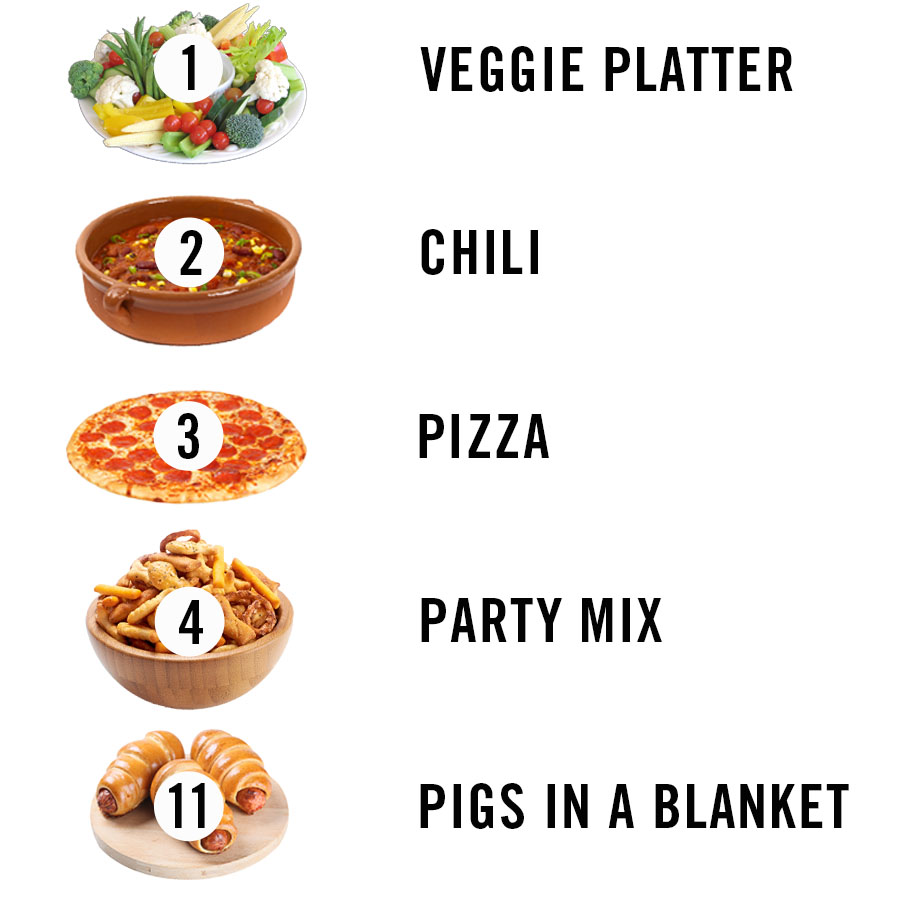 2. Chili: “Chili usually contains some vegetables (fiber) and possibly some beans, which provide plant-based protein,” Hunnes explains. “Chili is also more of a filling ‘meal’ than some other high-calorie, unfilling Super Bowl nosh. But to make this dish even healthier, more environmentally friendly and lower in calories, I recommend substituting beans for meat.”

3. Pizza: Hunnes says pizza earns third place, since veggie pizza can be healthy. But she also mentions that meat-lovers pizza is “terrible for you.” So if you want to build a healthy (or somewhat healthy) pizza for your Super Bowl party, check out our previous ranking of popular pizza toppings. And for the love of God, avoid the frozen kind, they’re all terrible.

4. Party Mix: “This is mostly white flour and salt,” Hunnes says, both of which aren’t very healthy. But on the plus side, Hunnes explains, “You can usually only eat so much before getting flavor fatigue.” All of which means, so long as you don’t eat an entire bag of the stuff, party mix isn’t too bad.

6. Sliders: “While I’m not one to promote meat eating, at least sliders are small and provide some satiating protein,” Hunnes says. “The one problem is that people usually don’t eat just one — they eat two or three, in which case, the saturated fat, salt and calories can add up.”

7. Potato Skins: “Whatever you put on the potato skins makes them more or less healthy than the skins themselves,” Hunnes says. “But since they’re usually deeply fried, salted and covered in not-so-healthy toppings [like bacon bits], they’re not usually very healthy.”

8. Jalapeño Poppers: “The healthiest part of these are the jalapeños,” Hunnes says (jalapeños are a particularly good source of fiber and several other nutrients). “The insides, however, are usually salty, fatty and not so good for you. Plus, you usually end up eating a half-dozen, and these are close to 100 calories a pop.”

9. 7-Layer Dip and Nachos (tied): Nachos are basically just chips that have 7-layer dip poured onto them, and according to Hunnes, both have the potential to be somewhat healthy. “If you alternate the 7-layer dip with healthy items, including hummus, bean-dip, guacamole and salsa, and you eat fairly healthy chips, such as baked chips or low-salt corn tortilla chips, this can be a healthy dish,” she explains. “On the other hand, if you eat fried chips and layer them with some of the less-healthy dips mentioned earlier, this isn’t healthy.”

I guess all that explains why the bowl in my bathroom doesn’t look so super by the end of the day.