How fans of the Mario franchise went from asking where Wario and Waluigi’s girlfriends are, to championing them as LGBTQ icons

When Nintendo announced its upcoming Mario animated movie, the internet bubbled over with theories about which A-list celebrities would voice each beloved character. But the news also stirred up a long-standing sore subject within the Mushroom Kingdom fandom: Why doesn’t Wario have a princess counterpart?

Nearly every main character gets some form of cishet partner: Mario has Peach; Luigi has Daisy; Donkey Kong has Candy Kong; and even Yoshi has Birdo. But when it comes to Wario and Waluigi, they’ve got nothing.

If leaving the two most prominent foils to Mario and Luigi without their respective princesses feels intentional, that’s because it is. According to a 2000 interview published in Nintendo’s official magazine, Nintendo Power, developers working on Mario Tennis 64 realized they needed additional characters. “We asked Nintendo about girlfriends for Wario and Waluigi,” the game’s producer Hiroyuki Takahashi explains. “But [Shigeru Miyamoto, the creator of Mario] said that he didn’t even want to see their girlfriends.”

With Miyamoto’s direction made clear, Mario Tennis 64 developers put the kibosh on the proposed “Warupichi,” and that was that. There have been sparing, subtle references to Wario being involved with Peach and Daisy in games since, but in all publicly available information, there’s never been another serious proposal of princess pairings for the deviant duo.

As a result, fans of the franchise — especially those who haven’t seen themselves represented in the otherwise staunchly heteronormative Mario Universe — have taken the opportunity to turn Wario and Waluigi into LGBTQ icons.

Artist Veronica Bryant, for example, designed a version of Warupichi that challenged the notion that female Mario characters need to be “princesses and fairies,” or even connected to the male characters at all. Rather, she made Warupichi a counter to Peach. “I wanted to create women who are just as ill-tempered, slimy and unpleasant as the other villains,” Bryant, who goes by @RetroSpecsArtwork on Instagram, tells me. “That’s equality, baby!”

As such, her rendition of Warupeachi is “Queen Kreach, Ruler of the Fungi Gardens”: 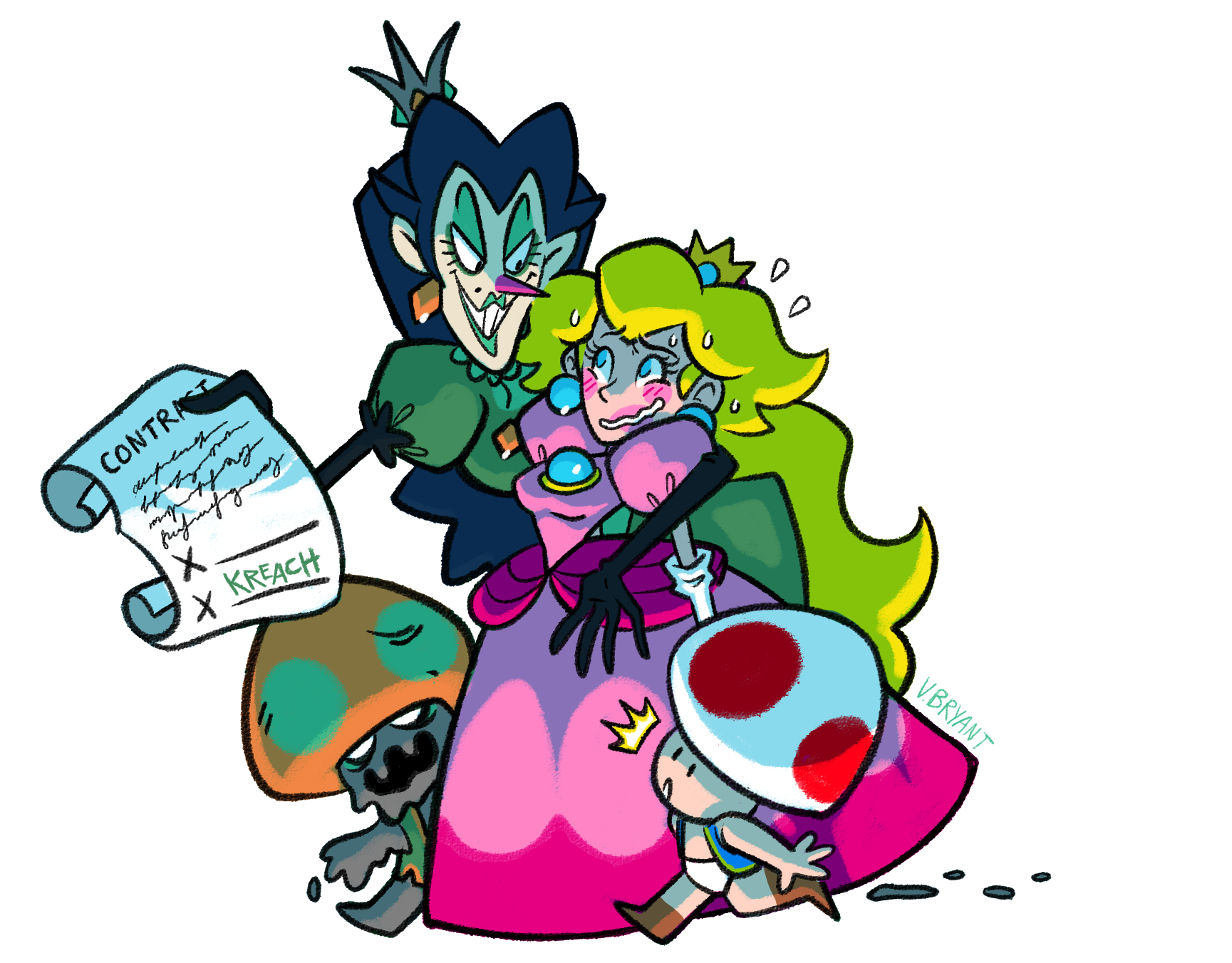 Perhaps the most logical endpoint of Wario and Waluigi’s lack of character sweethearts is that they don’t need princesses because they have each other. “A handful of Nintendo characters were LGBTQ-coded in Japanese versions and changed upon U.S. localization,” Bryant explains. “That sort of purposeful absence always bothered me, and being a member of the LGBTQ community myself, I’m all for headcanoning them as queer!”

Although the viral snippet of Nintendo Power that winks at the theory is actually doctored, Wario-Waluigi shippers do have some evidence on their side.

Nintendo’s own in-game lore describes Waluigi and Wario’s relationship as “a mystery,” and “unclear.” In 2008, when asked if the two were brothers, the actor behind the duo’s voices, Charles Martinet, argued they weren’t. Rather, he said, they were simply “two nice, evil guys who found each other.” Ten years later, a 16-year-old named Campbell sent Martinet a Twitter DM asking if he thought Waluigi had a boyfriend.

Martinet said he’d never thought about it before. When Campbell responded, saying he’d like to think Waluigi was gay and “living a very happy life,” the voice actor said Waluigi was “most certainly living a very happy life!” and that he hoped Campbell was as well. The heartfelt exchange gave credence to Wario and Waluigi as LGBTQ representatives in the Mario Universe. “Some people have replied to tell me that they have tears welling up, or that this was the best thing they’ve read all day,” Campbell told BuzzFeed News at the time. “It really kinda restores my hope.”

More recently, many members of the trans and nonbinary communities have taken to Wario and Waluigi. Not only do the colors of their outfits happen to match those of the nonbinary and trans flags, but there is some near-canonical precedence as well. In a November 2003 edition of Super Mario-kun, an officially ordained Japanese-published Mario manga series, Wario feels that in order to fulfill his dream of being a pop star, he must undergo a body-swap with Princess Peach. With the help of Dr. Mario, Wario takes the bodily form of Peach, and Wario-Peach (or as some fans call her, Waria) was born.

It doesn’t really matter if the canon doesn’t go deeper than that, as many queer fans are more than happy to fill in the blanks themselves. Case in point: Mocha, a 16-year-old in New Jersey, believes the “open ‘queerness’ of the duo makes them a perfect canvas for self-discovery, something I could project myself onto to experiment.”

“Would it be out of the question for Waluigi to dress in a maid costume?” Mocha asks. “No. Therefore, when I played a Waluigi-like character in [Dungeons & Dragons], it was easy to use it to express myself, and eventually, it helped me realize that I was queer. I owe it all to how Waluigi’s design is so open and inviting to exploring your gender and sexuality.”

And so, the question of whether or not Nintendo will ever officially introduce princess counterparts for Wario and Waluigi has pretty much become a moot point. “It’s just one of those cases where I’m not sure if I’d ever want an official Wapeach or Warupeachi now,” Bryant says. “Some things are just better left to the imagination.”