Trashfire Daddies, Vaping on the Toilet and People Who Have Given up Sex

Vaping has really revolutionized nicotine delivery, hasn’t it? Smoking, which was once a dirty, smelly vice, is now clean and odorless. That means you can get your fix in places that aren’t 20 meters from the nearest building entrance or exit — like from the comfort of your own toilet, which Quinn Myers found out is an actual thing vapers do.

But what that also means, dear readers, is that people are probably vaping around you all the time, and you never even knew it. Like:

You heard it here first. Secret vapers are out there, man. Don’t ask me how I know.

“‘Trashfire Daddy’ and Other Names You’ve Been Given in Your Exes’ Phones”
Did you ever ghost, send “u up?” texts at 3 a.m. or otherwise act like a jerk to an ex? If so, odds are your previous designation of “baby 💘” “lovah,” or just like your actual name, has been replaced in their phones with monikers far less pleasant. Editor and serial dater Alana Levinson details her and her social groups’ experiences with renaming their exes in their phones, and the reason why they’re doing it, imho, might be the best way to put the kibosh on a shitty relationship. READ MORE

Settling in for a Voop

While taking a shit feels great, nothing beats the sweet nicotine buzz while sliding a log outta ya butt.”

Taking a satisfying shit is one of life’s greatest pleasures. Some even say it’s better than sex. So you can only imagine what it’s like to feel the rush from your morning drag on your preferred vaping device while taking that satisfying shit. Yeah, it’s that good. Quinn Myers spoke to vapers about the “voop,” or vape poop, and what it is about inhaling vapor that makes dropping a heater so euphoric.

The Exact Opposite of ‘Situational Awareness’

How addicted are we to our smartphones? How about so addicted that we don’t even look up to notice that we’re being robbed. That actually happened to a man in Brazil, who just kept scrolling away while the bar he was at was being knocked over. Turns out, scientists have a theory about why we get so engrossed in our screens — even at the risk to our personal safety.

In the early stages of dating, it can be tempting to, ahem, call the whole thing off when you discover you and your partner have vastly different eating habits. Eddie Kim knows — his loud, slurpy eating-style, product of his Korean heritage though it may be, is completely at odds with that of his more subdued girlfriend. So is such an impasse worth overcoming? He’s inclined to think so, and behavioral research on the topic backs him up.

Sex? Who Needs It

These days, when you run into someone who says they want nothing to do with sex, you might be inclined to assume they’re hiding some toxic attitudes, a la Men Going Their Own Way or the like. After speaking with some of these voluntarily celibate people, however, Miles Klee found that taking yourself out of the dating pool can actually have positive effects.

“A headache.” “Too much work.” “High maintenance.” For a woman, being called one of these things is an albatross around your neck you’ll carry until some poor fool puts a ring on it. But no one ever talks about high-maintenance men, despite the fact that they exist, too. And that’s because, as Tracy Moore writes, women love them anyway.

There you are, enjoying some perfectly ripe fruit, when all of a sudden… Wham! Your throat begins to close up and the hives set in. That’s what happened to this poor soul on Reddit, who after 38 years of issueless fruit-eating developed an allergy to the stuff seemingly out of nowhere. According to an allergist and immunologist we spoke to, these things do happen — and thankfully, it’s controllable if you know what to do.

Thinking about getting into a love triangle with a Scorpio? Better rethink that move there, chief. Allow MEL art director and in-house astrologer Erin Taj to explain.

Three months ago, actor, writer and improv teacher Steve Bean Levy wrote about his year of living without a nose, a truly horrible side-effect of the terminal cancer he had been diagnosed with, but one that he had been able to find some humor in. Unfortunately, Levy’s latest round of immunotherapy hasn’t worked, and he’s back on chemo.

In an effort to mitigate his hospital bills, comedians around L.A. are throwing a benefit for Levy next Saturday, November 24, at ACME Comedy in North Hollywood. If you’re in town for the holiday or otherwise, we highly recommend you go and check it out — all proceeds go to Levy and his fight against cancer. 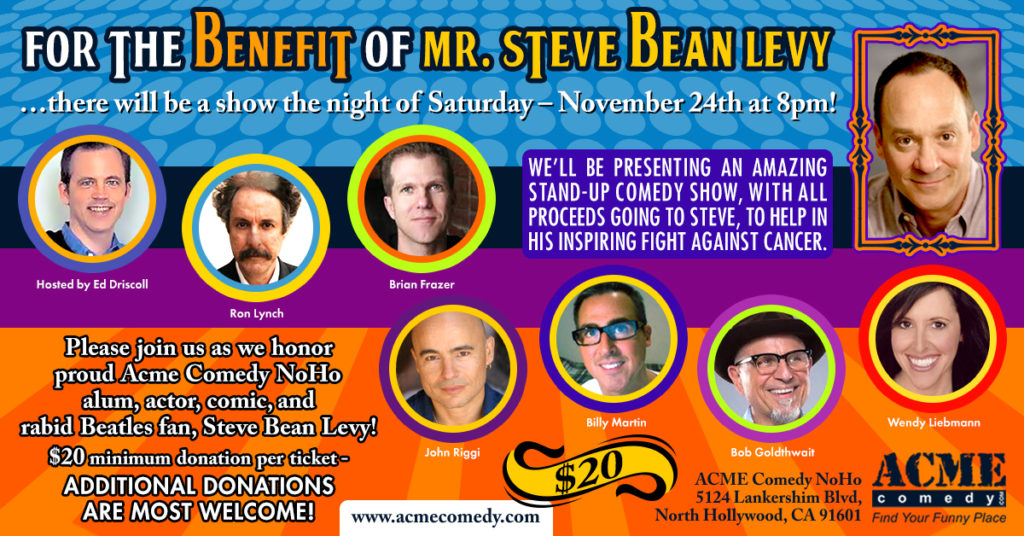 Get all the details (or give directly!) on his GoFundMe page.