If we’re in a new realm of transmasculine names, what are today’s Trans Guy Names™ — and how are we all going about the process of choosing?

Is there a better way to change everything about your life than by changing your name? Because while it might not completely erase your circumstances, it definitely allows for a new you, if in name only. So this week, we’re looking at what’s in a new name — for yourself, for your favorite TV characters, for your boat, for your stripper, for your son and for nearly everybody (and thing) in between.

Not one Aiden spoke to me for this story, which seems impossible. The commonality of the name Aiden and its many variants (Jayden, Brayden, Kayden, etc.) among trans men is so common it’s actually a meme. But when I put out a call online for transmasculine folks to tell me how they went about renaming themselves when they transitioned, not a single Aiden popped up in my email or DMs. Preposterous.

What convinced me to stop freaking out about how I couldn’t possibly publish this piece without speaking to an -ayden was realizing that their lack of participation was probably purposeful. To do the work of considering what kind of guy you want to become, summoning the wherewithal to envision the person you might grow into during the already-stressful process of social transition, and then selecting a name that you believe captures your most authentic self — only to discover that your deeply personally, meaningful name is a community-wide meme? I probably wouldn’t want to talk about it, either.

There may also be fewer Aidens than we were previously led to believe. One respondent plainly told me, “By the time I transitioned, ‘-ayden’ names had been the joke option for 5 to 10 years.” In other words, to avoid the trope, transmascs who are contemplating a name change now might consciously eliminate -ayden variants from their list of possible monikers. Plus, there are new trans-guy-name memes to consider, like the fact that many of us choose names befitting drowned Victorian orphans or Regency-era aristocrats. (I’m guilty of this, and I’m not even a little bit sorry.)

Other memes generously describe up to five discrete categories of transmasc names, but obviously this is a field worthy of further exploration. Because if we’re in a post-Aiden realm of transmasculine names, what are the new Trans Guy Names™, and how are we all going about the process of choosing what to call ourselves in the first place?

One nonbinary person named Noah tells me that god literally gave them their name. “I legit plopped down one night and was like, ‘God, I know I need to pick a new name. Help me out here,’” Noah explains. “I got into bed, started falling asleep and the name NOAH pops into my head really loudly — and it doesn’t feel like my thought, you know? I spent two days trying to find another name that fit as well as Noah did, but nothing felt so right.”

The majority of trans men and nonbinary folks I spoke to, however, didn’t receive guidance from the divine. Without explicit instructions from supernatural forces, many of them entered into the process of choosing a new name with a strict set of criteria, and methodically sorted through possible options until they landed on one that worked for them.

For example, Tobias, a software developer from Germany, delved into the name-choosing process with both a set of criteria and low expectations. “I reminded myself that everybody else can’t choose the perfect name either, and they still live their lives, so I’d be okay with just finding a good name, not the best.” Still, he’d decided on parameters for his new name: “I had to vaguely like [the names]; they had to have a short form — I like nicknames; and they had work in my native language and English. My previous name didn’t work in English, which was a pain.” He ultimately settled on Tobias — Tobi, for short — which immediately obliterated his low expectations. “Once I was called ‘Tobi’ for the first time, I was in love,” he says. “Gender euphoria is a hell of a drug. I’ve been known as Tobi for over four years, and sometimes somebody will say something like, ‘Tobi, can you do X?’ and I’ll still get an endorphin rush out of it.”

For others, religious rules (the kind that don’t come directly from a deity) played a significant part in their decisions about what they should be called going forward. Many of the Jewish transmascs I spoke to pointed out that, per Jewish naming tradition, it was important for them to keep their same initials, and so, they chose new handles that began with the same first letters as their previous first and middle names — though sticking to tradition was easier for some than others. Case in point: One respondent admits he chose a new first and middle name as an homage to two queer scholars whose work he admired, but the resultant name “isn’t Jewish in the slightest.”

“It’s Ashkenazi tradition to take the name of a family member who has died as a first or middle name, and I was close to my grandfather, who has passed, but I’m also super-attached to the name I constructed for myself,” he says. “I feel like I’ll be navigating that stubbornness and fondness for the rest of my life.” Another Jewish respondent, James, notes that the name they chose “is a WASPier name than my birth name; I don’t feel great about picking my name in a moment of baby trans assimilation hopes.”

But for some, like Javier, assimilation was the furthest thing from his mind. “It was most important for me to still have a name that sounded Latino. I remembered a conversation where my parents said if I was born a boy one of the names on the table was Javier. I looked up the meaning and it means ‘new home,’ so it just fit.”

Masculinizing or abbreviating a previous name (sometimes called a “birth name” or a “dead name”) seems to be the easiest option. “I’m older, so sticking to something close to my birth name seemed important,” a Twitter user named Jules says. Others consciously tweaked their names as little as possible because it was easier for their loved ones. “My name is a shortened version of my birth name,” explains Al. “I wanted to keep the essence of the name because I know it matters to my mother — I was named a variation of my grandmother’s name. I have a sense that my grandmother was a soft and strong piece of my mother’s otherwise difficult and abusive life, and I wanted to keep that piece of her history alive.”

Of course, not every trans person took such a calculated approach to rechristening themselves. Says Henry, “I chose Henry because I was really into Thomas the Tank Engine as a kid and insisted on being called Henry, much to my family’s dismay.” And that was it? “Pretty much, yeah. I wanted to be called either Henry or Gordon after the trains, and I didn’t particularly like Gordon, so Henry it was.”

Childhood — and formative moments in adolescence — informed a number of name choices. Or as Colby Gordon puts it, “I named myself after the shitty town I grew up in. I survived it; it’s part of me.” Poet Stephen Ira chose a similar homage: “I’m named after the first adult who was kind to me when I told him I was trans! He was my high school theater tech and video production teacher. He’s a great guy and still teaching.”

There are as many paths to finding a new name as there are trans people seeking to rename themselves. Considering that finding a name is usually one of the first things someone does upon realizing they’re trans — generally a time of significant self-exploration and growth, but maybe not the most relaxed backdrop for major decision-making — it’s incredible how much thoughtful care and personality goes into selecting this early marker of a new or evolving identity. It’s also an encapsulation of one aspect of the trans experience, inasmuch as there’s no “right” way to transition. You do what you think is best for you with the information and resources you have, but ultimately you’re just making it up as you go along — you know, like Calvinball.

Which, yes, is exactly how I found my own name.

Calvin Kasulke is a transsexual and a contributing writer at MEL. You can pre-order his novel Several People Are Typing here, and find him on Twitter at @cjkasulke.

The Oh-So-Sweet History of Gay M&M’s 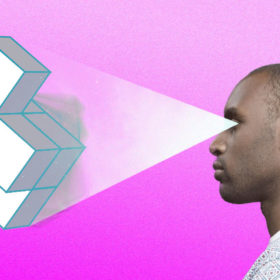 Men Are Addicted to Rotating 3D Objects in Their Minds