The Wolves of Dogecoin: Inside the Underground Crypto Hustle

For over four years, a pump-and-dump Discord channel has scammed millions from unregulated cryptocurrency markets — and it’s only growing stronger

Every 48 hours since October 2017, an administrator of the Discord server Big Pump Signal who goes by Dominus unleashes a massive, coordinated misinformation campaign. His goal is to inflate the price of an otherwise worthless cryptocurrency by flooding social media with claims that the coin is about to skyrocket in value. It’s called a “pump and dump,” and if all goes well, Dominus and the members of Big Pump Signal will end up richer than they were the day before.

In effect, this is the digitized, cryptocurrency-version of the very scam that put Jordan Belfort, the inspiration for The Wolf of Wall Street, behind bars in 1999. Rather than artificially inflating the value of penny stocks, however, Dominus and the members of Big Pump Signal take advantage of cheap, lesser-known alternative cryptocurrencies often called “altcoins.”

Since the creation of Bitcoin in 2009, the number of altcoins have grown exponentially, to the point that it’s nearly impossible to track how many exist (Bitcoin.com estimates there’s roughly 5,098 in circulation today). Similar to penny stocks, altcoins are extremely cheap to buy and benefit from the get-rich-quick gamble that’s created roughly 25,000 Bitcoin millionaires. At the same time, these coins often fail or crater to near-worthless values, which has garnered altcoins the secondary nickname of “shitcoins.”

Yet thanks to the unregulated wild west of the cryptocurrency market, Big Pump Signal (BPS) continues to do what Belfort could only dream of. Because the general public isn’t exactly well versed in the volatile, saturated cryptocurrency market, BPS manipulates social media algorithms to reach thousands of unsuspecting people with claims that “Shitcoin X” is on its way to becoming the next Bitcoin.

According to researchers from the Sapienza University of Rome, who spent nearly two years studying BPS between 2017 and 2019, it’s the biggest pump-and-dump group in existence. Dominus and the other administrators of Big Pump Signal didn’t respond to multiple interview requests, but you can get a pretty good idea of how the group pulls off such massive heists on a near-weekly basis by joining their Discord and Telegram channels.

First, though, it’s worth looking back at 2017, when a boom in cryptocurrency popularity gave way to the environment in which BPS thrives today. Writing for VICE, Jackson Palmer, the creator of Dogecoin, pointed to the pump-and-dump scammers as the reason he was cutting ties with the world of cryptocurrency. “In many ways, 2017 marked the year that cryptocurrency stopped being about technologically innovative peer-to-peer cash and instead essentially became a new, unregulated penny stock market,” he writes. “This irrational enthusiasm, coupled with large players manipulating largely unregulated markets, has resulted in a weekly cycle of rallies and crashes across just about every crypto asset.”

The losers of this game, he continued, are “inexperienced investors buying up low-priced assets on a whim, hoping that they will follow Bitcoin’s meteoric trajectory.”

Four years later, manufacturing value in low-priced altcoins isn’t just a loophole that a few bad actors are taking advantage of; it’s now a cutthroat investment strategy increasingly adopted by the mainstream. On February 2nd, Dominus reported in a post that the group saw an additional “100,000 members in the past 2 days.” The recent exponential growth puts BPS at 247,395 members on Discord and 136,195 on Telegram. Across all social media, administrators claim, the group surpasses half a million.

To that end, more members result in bigger scores. In 2018, per The Wall Street Journal, the group pumped and dumped $222 million worth of trading volume over the course of 26 operations. According to Dominus, the group achieved half that trading volume in January 31st’s pump and dump alone. “More than 110 million USD flowed into $PNT in the first hour after the call,” Dominus wrote in an update to BPS members, “which is insane.” (For sake of comparison, at the height of Belfort’s penny stock operation, he employed 1,000 people who were ultimately responsible for issuing stocks that totaled over $1 billion.)

Whether the group’s growth is due to Bitcoin’s value hitting 40K or $GME drumming up FOMO-induced interest in retail investing, BPS has continued to proliferate because of the premium it places on recruitment. As is the case with many other pump-and-dump groups, members of BPS operate within a hierarchy. At the top of the pyramid is the inner circle of administrators, below them exists a system that awards “ranks” to members depending on how many people they’ve invited to the group.

The higher your rank, the earlier you learn which coin the group will be pumping. The earlier you know the coin, the better chance you have “to buy at a lower price and make more money out of the pump-and-dump operation,” the team at Sapienza University explains.

Setting aside the obvious red flags that such a scheme might raise, BPS administrators run a tight ship. After all, organization and communication are imperative when coordinating half a million people to perform specific tasks in a very timely manner. 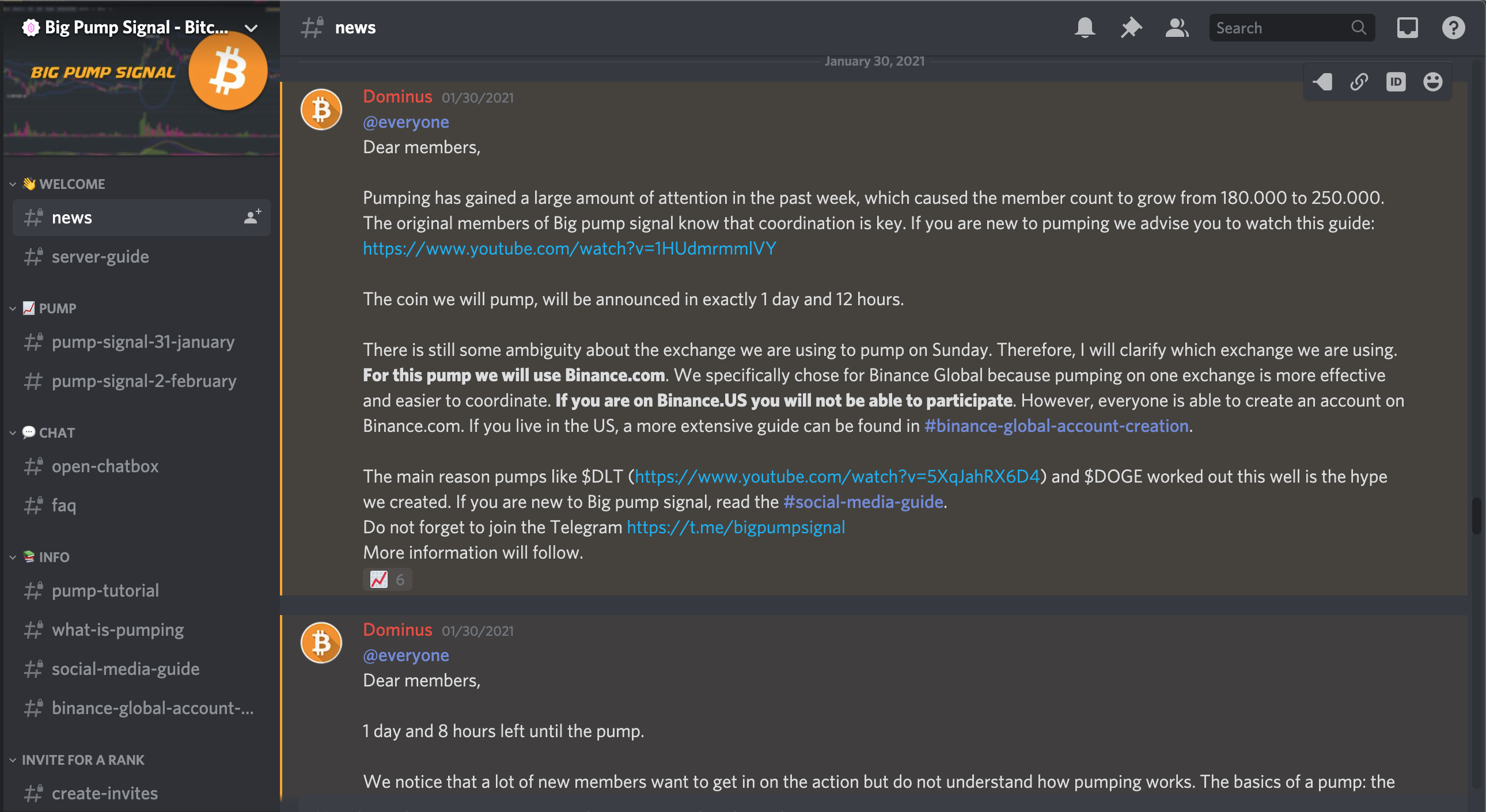 With several channels dedicated to different resources and updates, administrators are able to sufficiently optimize their growing membership into performing bigger and bigger pumps. For instance, upon joining the group, beginners are funneled to channels with educational resources and tutorials that explain what pumping is, what you can do “to help make the pump as successful as possible” and how easy it is to profit from the group’s coordinated efforts. “One of the most essential actions that need to happen to create a successful pump is spreading news or ‘buy signals’ on social media,” BPS’ official social media guide reads. “If we succeed and news about the coin goes viral, even more outsiders will FOMO (fear of missing out) in.”

At a certain point, it won’t matter whether veteran investors have sniffed out the pump, because their voices will be drowned out by the manufactured enthusiasm. “The massive increase in price & volume combined with the large amount of hype on every social media platform will undoubtedly cause many outsiders to buy into the coin,” Big Pump Signal’s social media guide reads.

After the initial pump creates a massive spike in value, admins urge their members to avoid panic selling when the value begins a steep decline. “DO NOT PANIC SELL. We have seen in the past that a lot of people will panic sell when they’re down on their initial investment,” they write. “Just know pumps come in waves so there should be plenty of times within the pump that you will be able to sell with profit so do not panic.”

Empowering 500,000 people to leverage their collective power in the marketplace might sound noble, but zooming into a second-by-second breakdown of BPS’ pump of the cryptocurrency $OAX, the team at Sapienza University noted an abnormal “peak on the sell volumes” that coincides with the group’s peak volume of buys. Such a sudden, massive sell-off strongly insinuates that BPS’ insiders shored up massive amounts of the coin long before revealing it to the group’s highest ranking members. Then, when the lower-ranking masses were sent in to buy the coin at higher and higher values, the admins sold.

The $OAX pump wasn’t the only time this happened either. Over email, the Sapienza University team tells me that such behavior is common across a multitude of other pump-and-dump schemes. Yet — perhaps a credit to the group’s ironclad grip on top-down communication — the researchers add that in the nearly two years they spent monitoring the group’s Discord and Telegram channels, they never saw a member complain about unfair behavior by an admin.

That said, complaints can be found in forums outside of BPS admins’ control, such as on Twitter and Reddit. “I was ready for when the signal was released and noticed it was already pumped,” writes redditor No_Fritz on a January 31st post entitled “Big Pump Signal is a Scam.” “The inner circle of this group invested well before the signal was sent out. You can even see it in the charts a couple of days before. Within 15 seconds of the signal released the coin started to plummet, meanwhile they are on discord continuing to tell people to keep investing… Complete scam.”

In a separate post, One_Scratcho echoes this sentiment: “They present free for all pump and dump, yet they buy that coin days or weeks before, then increase its price, tell poor people to pay in market price, and boom, one second you see profit, and another your hands will be shaking to quickly sell with huge losses.”

Despite such backlash, there doesn’t appear to be any movement toward regulation or prevention of pump-and-dump groups like BPS. Rather, they will simply remain part of the “accepted risk” one takes when investing in the notoriously volatile cryptocurrency market. Not to mention, given the overall rise in crypto, they’ll likely only get more aggressive.

Case in point: The Sapienza University team tells me they found evidence of “more than 600 publicly arranged pump and dumps carried out in the last three years.” “In the short run, we think the exponential growth of the group allows the admins to arrange pump-and-dump events with higher frequencies, and to target altcoin with higher market capitalization than they’re used to targeting,” they explain. “We noticed that pump-and-dump groups are more active when crypto hits the news, like in the last few days, as it’s probably easier to attract non-expert outsiders looking for easy profits.”

In the long run, they continue, our best bet is that group members grow tired of the pumps and move on. “We believe that a lot of the insiders will realize that it’s not so easy to obtain profit. In fact, a lot of them will lose money on the scam and will leave the group. For instance, within months of Bitcoin’s hype coming to an end in 2018, BPS dropped from more than 100K users to 20K.”

All of which is to say, it’s up to individual investors to educate themselves. Otherwise, they run the risk of serving as a cautionary tale, like Mert, a Turkish college student who lost money he couldn’t afford to lose. “Don’t trust a community if you’re not the ultimate power holder among them,” he tells me. “I was a little furious with the community because I kept buying, but why didn’t they? Now that I suffer an important loss, I’m sad that things went awry. I lost belief in people that night.”

No matter how exciting people on social media make buying Dogecoin seem, there’s a reason they’re working so hard to reach more people. And when Doge, or any other altcoin purported to be the next big thing, crashes, it’ll be you who faces the consequences — not the financial shitposters who convinced you to buy it.