The Plight of the Small-Wristed Man, Why Mental Health Laws Can’t Stop Mass Shootings and Revisiting ‘The Sixth Sense’

I’ve never met an adult with smaller hands than mine. You’d think having tiny hands and tinier wrists might prove useful, like my ability to shove my fist all the way into a Pringles can with room to spare, but they can also be a problem, like when you’re trying to learn guitar. That said, my baby hands, along with my baby wrists, have never been a source of anxiety for me. Then again, I’m not a man. Because, apparently, tiny-ass wrists are a huge insecurity for many men, who consider their bony wrists too feminine.

Fellas, nobody is paying any attention to your wrists. Enjoy your Pringle-can freedom.

“Mental Health Laws Won’t Save Us From Mass Shooters”
Mass shootings innately seem like acts of psychosis, because most of us can’t imagine plotting to murder indiscriminately. But imagine for a moment that our country actually put into action the theory that psychosis caused gun violence, and implemented more rigorous screening for those looking to buy guns. Would this help ease the rate at which people are killed by assault rifles in the U.S.? The answer is a resounding no. Here’s why. READ MORE

Of all the theories around what causes mass shootings, the one blaming violent video games has got to be the worst, and clearly must be the work of Boomers who’ve never even played a video game before. To no one’s surprise, the teens aren’t having any of it, and to make their displeasure known, they’re responding via their preferred medium of choice: Memes. 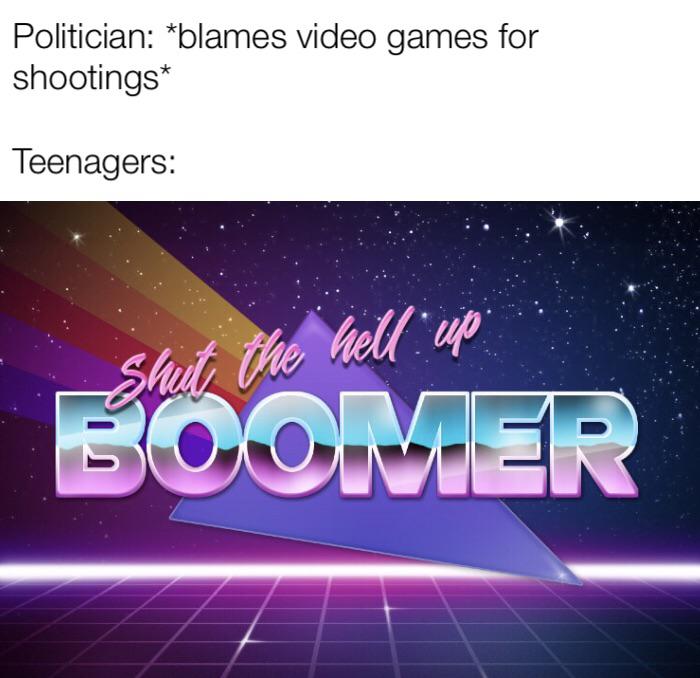 The exact motives behind Connor Betts’ murder-rampage over the weekend in Dayton, Ohio, remain unclear, but naturally, people are attempting to piece together some answers. One hint of Betts’ violent past comes from his involvement in a “pornogrind” band called Menstrual Munchies. Pornogrind is a niche within a niche, combining elements of grindcore — a heavier subgenre of metal — with themes and lyrics detailing extreme sexual violence and misogyny. Given its shock value and lack of talent requirements, it’s a genre that probably isn’t going anywhere. But is vile music anymore to blame for mass shootings than video games? Metalheads aren’t so sure.

Burn It With Fire

That unfortunately large spider you spot in the corner of your shower just as you’re about to suds up your most vulnerable parts might seem like the enemy, but it’s actually your friend. On the other hand, that helpless termite that dropped out of a hole in your ceiling? Roast that fucker, and all his little amigos, too. Because in the grand ranking of household pests, no bug deserves the Starship Troopers treatment more than the termite.

The Sixth Sense is the film that earned director M. Night Shyamalan the title of Master of the Twist Ending. But what makes the revelation that Bruce Willis’ character is a ghost so successfully subversive is the way that it highlights the greater horror of the film: That a person can turn into such a workaholic that they become oblivious to their own plight. Tim Grierson revisited the film for its 20th anniversary, examining how the iconic movie best serves as a warning for those on the road to dying at their desks.

Superman was created by Jerry Siegel and artist Joe Shuster to be an icon of hope. But judging by the music made about the superhero, he might as well be an icon of sadness.